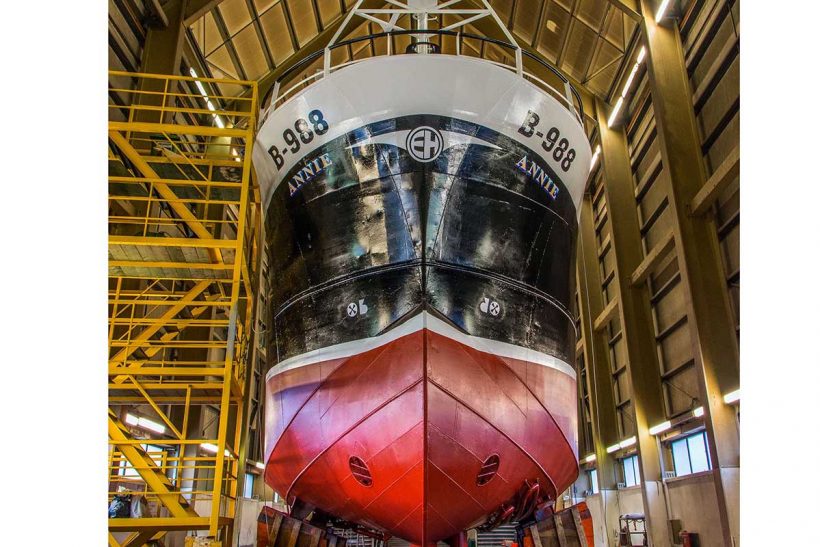 The vivier-crabber Annie B 988 was at Mooney Boats Ltd for some major repairs recently, after it went aground after suffering mechanical failure close to Fanad Lighthouse at the beginning of January, reports Pauric Gallagher. 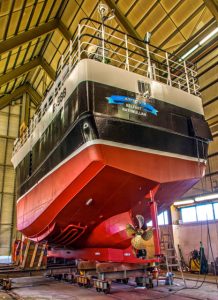 Annie B 988 ready to be refloated by Mooney Boats at Killybegs.

Owned by Hannigan Fish Trading, the 14.95m vessel was taken up on the syncrolift at Killybegs on 8 January, and the damage was fully assessed. Significant damage was caused to the rudder, tail shaft, propeller blade, steering system, the keel coolers on both the port and starboard sides, the hull on both sides, the bait store and the vivier tank. Fortunately, the keel coolers protected the hull from being punctured.

Engineers at the yard removed the rudder, steering system and propeller, pulled the shaft and removed the gearbox to gain access to some of the plating that was damaged. Once the plating was repaired, the gearbox and shaft were reinstalled. New bushings, steering rams and a new propeller were also fitted. Once that work was completed, the engine had to be re-aligned, due to the extensive welding and repairs to that section of the vessel.

The old channel keel coolers on the port and starboard sides were cut out and new piped keel coolers, made at the yard, were fitted.

The bait room was stripped back to the bare steel and all the plating was renewed, after which the walls were pumped full of close-cell spray foam insulation and fibreglassed by Mooney Boats.

The vivier tank also received some damage, so the plating there was replaced along with all the pipework. The tank was then shot-blasted and a new specialised paint system was applied.

Other works were carried out on the vessel during its eight-week visit to the boatyard, including pipework, carpentry and electrical work. Once all works were completed, Glen Campbell Painting painted the vessel internally and externally, before Annie was returned to the water.

Another vivier vessel, the 25.5m Heather Jane II D674 was also at Mooney Boats recently, with an issue with her stern gear. Owned by McBride’s Fishing Company in Co Donegal, the crabber was taken up on the syncrolift and engineers at the yard removed the shaft and the white metal bearings, which were recoated and reinstalled. New stern tube seals were also fitted. Once the work was completed, Heather Jane II was washed, painted and antifouled before going back on the water.

Mooney Boats has been extremely busy since the start of 2018, and the syncrolift saw its busiest January ever, with six vessels taken out of the water with the syncrolift on one day in the middle of the month. 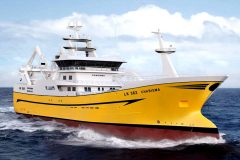 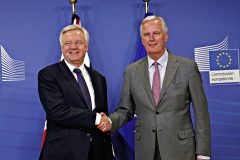