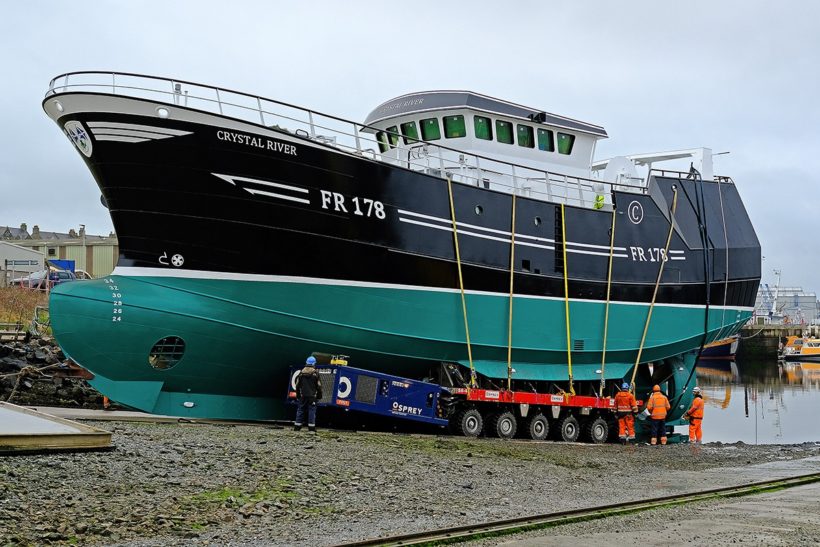 The trawler was then supported by shores before the low-loaders were removed. After gently floating off six hours later, Crystal River was towed a short distance to her fitting-out berth in Buckie’s inner harbour.

At 26.5m LOA, Crystal River is the biggest of the six boats to be built at Buckie since Macduff Shipyards marked the return of building fishing vessels at Buckie just over four years ago with the launch of Asteria II BRD 250.

Together with her new sistership Faithful, Crystal River has been built to replace the previous pair-seining team of the same names, which had a combined age of 72 years. Until Crystal River is completed, the new Faithful will buckle up with the former Crystal River, which was renamed Fulmar FR 176 by skipper David Cardno during a recent refit at Fraserburgh.

The 25.91m steel-hulled and cruiser-sterned Fulmar was built in 1985 by Johs Kristensen ApS of Hvide Sande, Denmark as the fly-shooter Sharon Louise BCK 20 for Buckie skipper Peter Simpson.

Five years later, the boat was bought by Mervyn Cobb of Aberdeen and renamed Fulmar INS 305. After nine years, during which time Fulmar paired with Liberty INS 153, which was built at the same Danish yard, Fulmar was renamed Crystal River after being purchased by skipper David Cardno 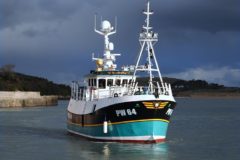 Boat Of The Week: Isabelle PW 64