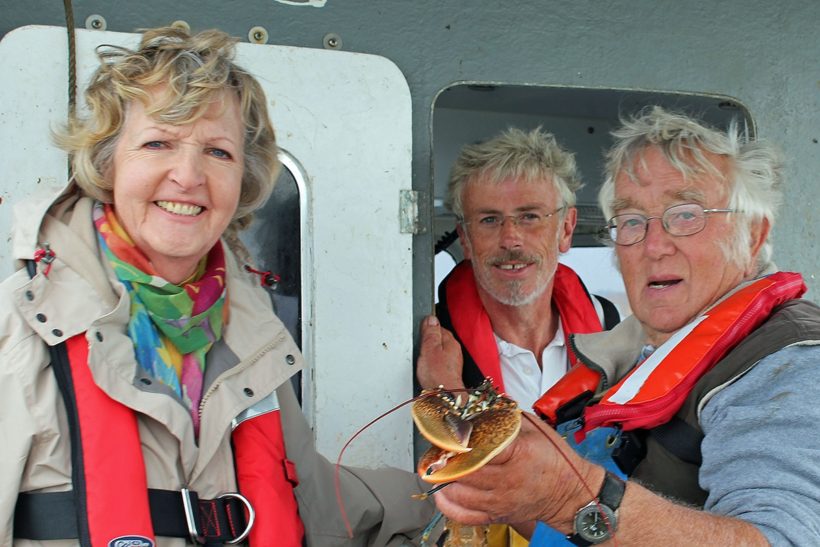 Bridport: Fishing For The Future

West Bay, the fishing harbour at Bridport, is one to be approached with caution, especially when an onshore wind is blowing.

In the great storm of 1942, the sea broke through, and the West Pier and café were carried away completely. In 1972 it was the turn of the East Pier, when the sea carved a great chunk out of it, and men had to shore it up as best they could amid the raging seas. Fishermen risked their lives taking on the challenges of this part of the Dorset coast. 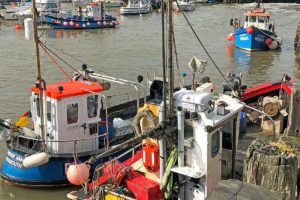 The harbour at West Bay, where increasing numbers of recreational boats are now berthed alongside the fishing fleet.

Now that the Covid restrictions have eased a little, Bridport is again popular with tourists attracted by the sights and sounds of the busy little fishing harbour, but as in other places along the south coast, its fleet has declined in recent times. Only a decade ago there were over 20 vessels fishing out of West Bay, but now there are at the most nine, as older fishermen retired and sons chose not to carry on the family traditions. The cost of home ownership locally, and the unpredictable income associated with fishing, mean that few newcomers are attracted to the industry on this part of the coast.

Fishing News met up with retired fisherman David Sales BEM and current fisherman Aubrey Banfield. David Sales, something of a local legend, fished from West Bay for over 60 years and recently retired at the age of 83. He is still very active in supporting local fishermen with his wife Gillian, and was awarded the BEM last year for his services to the fishing community.

Both men agreed that times have got a lot harder for south coast inshore fishermen, but said that the West Bay fishing community, along with other fishermen who fish out Lyme Regis and the surrounding areas, have supported each other well.

During the past 10 years, only one young fisherman has come to West Bay to join the industry – Terrance Foote, from Wales. He was supported by a local company, purchased his own boat, and still fishes from West Bay today. “If only things would improve, we could encourage more youngsters to return to the fold,” said Aubrey.

The harbour used to be dominated by fishing boats, but today, with newly developed moorings and a council that needs to increase revenues, it is recreational and angling boats that take the majority of the berths. This is something that local fishermen have got used to living with, and all manage to work well together. 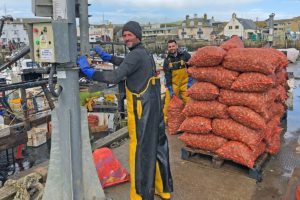 The crew of the Thomas Andrew PW 214 unload the day’s catch of whelks.

Lyme Bay has seen its fish stocks increase in recent times, so West Bay fishermen have seen the rewards of their sustainable fishing practices. But with increased stocks there has been an increase in nomadic fishers who come to the bay from elsewhere, often due to lack of quota on their local grounds, leading to competition for space and lower prices. Quota uplifts, at the wrong time of year and beyond the capacity of the local fleet, can, at times, have an adverse effect on local fishermen.

The West Bay fishermen point to the need for quota managers to consider the impacts of decisions on local fleets. More quota at the wrong time, particularly without effective effort control in the 6-12nm area, is not the answer to their needs, they say. Inshore fleets from ports such as West Bay rely on the seasonality of their fisheries and a balance being achieved.

David Sales said: “Most of our daily catches go to Brixham or Plymouth now, and we have a reasonable working network to get the fish there. As for local sales, we have an established relationship with Samways Fish Transporters in Bridport and its local fish shop at West Bay.” This is well supported by both residents and tourists. Local fishermen enjoy talking to visitors to the harbour, says David, which helps to build sales and share knowledge about the industry.

He said: “In the Southern IFCA area, we have got a 12m vessel length limit within six miles of the coast. This has been a great benefit to the fishermen who fish from Lyme Regis right the way up to Portsmouth. It is a real bonus for us, making fishing here much more sustainable. Nothing over 12m is allowed into the local area at all.

“I am lucky that I was involved in forming the Lyme Bay Fisheries and Conservation Reserve, and I am very proud of having helped to forge the links between fishermen, conservationists, regulators and scientists in order to maintain a healthy and sustainable marine reserve within Lyme Bay – one that will benefit fishermen and conservationists. 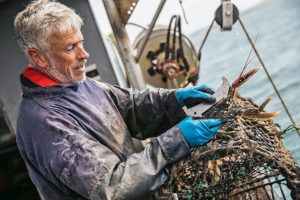 Aubrey Banfield checks the carapace length on a haul of lobsters.

“Of course, it may not be appreciated by all parties, but in the long term it has provided a future for the fishing communities within the area, by giving breeding area for species that need time to breed.”

What about working relationships with official bodies? “This at times has been far from easy,” said Aubrey Banfield. “By this I mean that there are not many on the front line who have the wealth of experience that fishermen have.

“Also, in some cases those at the top have even less experience, and work in offices knowing very little about fishing, fish and the sustainability of fish stocks. They seem not to want to listen any more, and put numbers before the reality of the actual working situation. Listening to the conservationist comes often before the fishermen.”

David Sales said: “We have had a good relationship with the local Southern IFCA. Reading about the way other IFCAs are run, and issues around them, does make us feel a bit more secure here at West Bay. This is not to say we have not had our own problems to deal with at times; sometimes we reflect on the past and feel we had more say when it was known as the Southern Sea Fisheries Committee, with more fishermen being on those committees.”

I asked Robert Clark from the Association of IFCAs (AIFCA) about this. He has recently taken up the role of AIFCA chief officer, having previously been head of Southern IFCA. “It was actually the members of the authority who were in charge! My role in the organisation was to facilitate and engage the members, so as to enable them to make the decisions and support the local fisheries and deliver conservation objectives.” 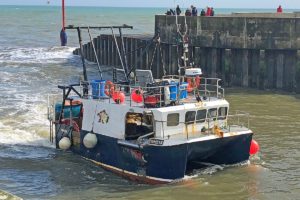 The South Coast Fishermen’s Council, comprising fishermen and members from local governing bodies and industry, is an active and effective organisation. David and Aubrey say that this team can often get more done than by going through official channels such as DEFRA, the MMO and Seafish. The personal touch seems to have gone now, they say, and this is not helpful when it comes to meeting fishermen and sorting out issues.

David added: “We need to be able to get our own house in order as to the way we fish – things like quotas, licensing of fishing vessels and which areas are fished by whom – especially now we have left the EU. Sadly, we go back to the key argument that those at the top often know little about the subject matter. The ones on the front line often seem frightened by those with less experience sitting behind a government desk. It may not be intentional, but it certainly shows at times when fishermen need answers to important questions that can affect our livelihoods.”

Aubrey said: “It is about supporting each other – let’s take safety at sea. As a long-established fisherman, I am well ahead of this. At the moment, too many new regulations are coming in which are involving us in extra costs. Some of this extra electronic equipment is not always necessary. It is the same when it comes to the electronic paperwork we are now having to do. Catching fish is what our job is all about.”

West Bay has seen significant changes over recent years, but by working together and alongside local fisheries managers, it has sustained a working fishing community. Local fishermen’s main worry now is how the government will support the industry now that we have left the EU. “It would be nice to see youngsters arrive back at West Bay knowing that they have a future to look forward to. We are not getting any younger, and need the reassurance that this will start to happen,” said David. 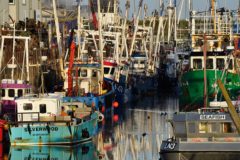 All coming out in the Wash 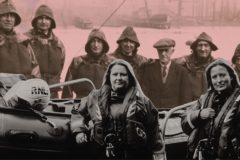 Launch! – Connecting with the RNLI