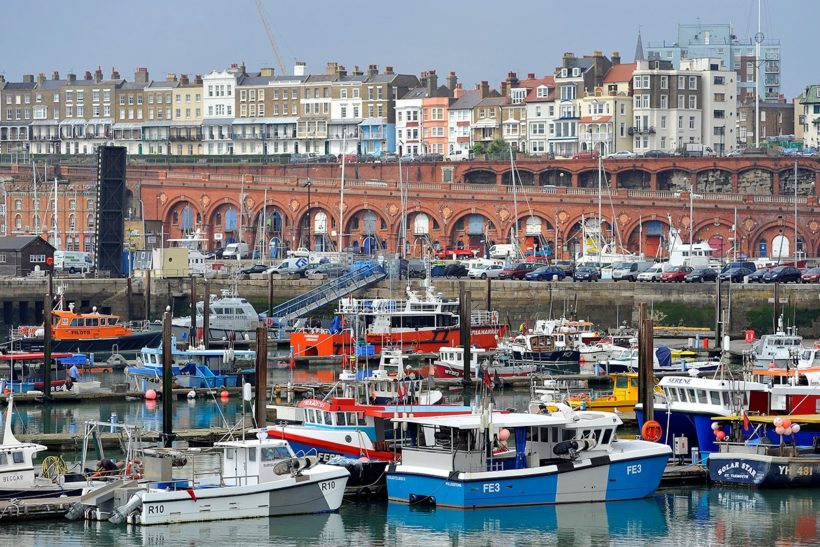 The fishing community in Ramsgate has a long history – but an uncertain future, reports John Periam

Ramsgate harbour, built between 1787 and 1795 by John Smeaton, has the distinction of being the United Kingdom’s only royal harbour. Like many things in history, this came about by happy accident. In September 1821, George IV was due to visit Hanover, but chose to leave and return via Ramsgate rather than Dover, the closest port to Calais, because his estranged wife Caroline of Brunswick was always made welcome when she visited Dover. As a result, he decreed that Ramsgate should henceforth be designated a royal harbour. 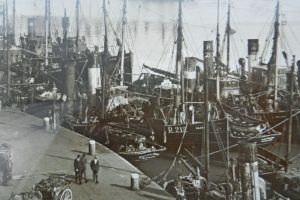 Steam trawlers in Ramsgate’s Inner Basin in the 1920s.

Fishing has always played an important part in the history of this harbour as it had a pier suitable for small vessels. As a result, it became a ‘limb’ of Sandwich, one of the Cinque Ports. By the mid-1500s, records show that Ramsgate had 14 boats, giving work to 70 men.

John Ray, who has done a lot of research on Ramsgate’s maritime history, said: “There is little recorded about fishing at Ramsgate before the 1800s, but it was known to have been a major source of income to the town. In a will of 1724, lifelong resident and fisherman John Moverly left his daughter Jane part of the ‘good fishing boat called William and John’, which was skippered by a John Kibball.”

Prior to the 1800s, most Ramsgate fishermen fished in shallow waters using drift-nets. Their boats were generally two- or three-masted luggers based on a simple medieval design. After a major storm on 16 December, 1748, which caused considerable damage to many vessels off the Thanet coast, it was decided to develop Ramsgate harbour as a safe haven. This was ideal for fishing vessels, and during the 1800s fishing smacks from Devon started to use Ramsgate harbour as a base, especially during the winter months. The town’s fishermen saw the advantage of such vessels, and even purchased some from the Devon fishermen. 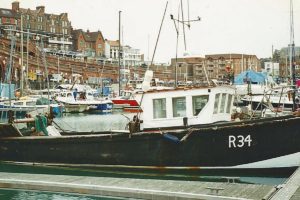 Ramsgate’s inner harbour provided a safe berth for U10 vessels – but pressures on the industry at the turn of the millennium saw many boats tying up for good. (Photo: Mark Stanford)

Fishing expanded at a rapid pace. In 1863, there were some 50 fishing boats registered at Ramsgate, and by 1873 this figure had risen to around 140. It would eventually peak at 185. By 1890, there were over 300 fishing vessels using Ramsgate, from as far away as Brixham and Lowestoft. During these boom times, the daily autumn herring catch could reach 150t.

One of the social downsides of this growth was the treatment of many of the fishing apprentices or ‘smack boys’, as they were known. Some were as young as 11. The fishing industry was heavily reliant on youth labour, and the Victorian system of trade apprentices indenture was a means by which a smack boy could be bound in service to his employer for up to 10 years.

For his part, the employer undertook to train the boy in fishing and seamanship skills, and to feed and clothe him whilst at sea. But while some of the smack owners and skippers treated their apprentice boys as part of their family, sadly many were mistreated. Some of the apprentices were indentured with their parents’ approval, but most came from poor backgrounds and many were recruited from orphanages and workhouses. 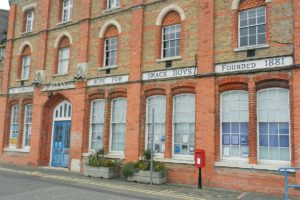 The Ramsgate Home for Smack Boys is still standing to this day. (Photo: John Ray)

The Reverend J Eustace Brenan, vicar at Ramsgate’s Christ Church, became concerned about the plight of some of these apprentices. His efforts had already resulted in the building of the Ramsgate Harbour Mission (now the Sailors’ Church) and the Sailors’ Home for Shipwrecked Mariners. In 1862, he gained the support of the harbour managers for the building of a home to house the apprentices. Named The Ramsgate Home for Smack Boys, it remained in use for over 30 years. The frontage of the building stands unaltered to this day, with the name engraved across it often raising understandable questions from visitors to the area!

The 1900s saw a steady decline in the number of smacks, and in February 1915, after the outbreak of the First World War, it was decided that Ramsgate should become a naval base. This caused many smacks to be laid up or move to other ports. During the war, 51 smacks were lost to enemy action and the fishing fleet continued to decline, resulting in only 26 remaining in 1923. Steam trawlers began to take over. There were 24 at Ramsgate, but with the realisation that stocks in the area were decreasing, trawlers gradually moved away from Ramsgate, primarily to the West Country. 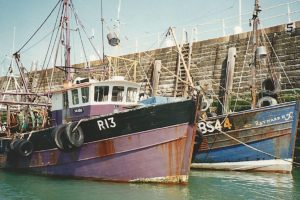 After the Second World War, there were about a dozen trawlers fishing out of Ramsgate, joined by some ex-Navy vessels. With the return to market sales after wartime controlled prices, and a decade of poor fishing, the fleet dwindled to the point that by the end of the 1950s, there was no fishing at all from Ramsgate.

Small-time fishing from the harbour started again in the early 1960s, one Ramsgate fisherman from that era being Tom Brown MBE with the ex-Navy 36ft harbour launch Shiralee R 7. Ron and Bill Blay also fished there in the 1960s, with the ex-Whitstable whelk boat Welcome Messenger.

Tom said: “As the decade progressed, we all changed and improved our boats. We were joined by other lads buying boats for trawling. This revival was helped by the development of synthetic twines, and the use of a Decca navigator that we were introduced to by the vessels surveying for the proposed Channel tunnel. By 1970, I had progressed to the 48ft trawler Ross Laire, which I purchased from Bridlington.” 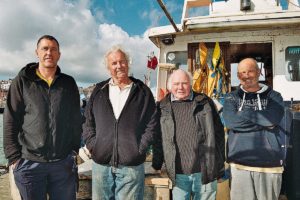 After 1973, fishing took another downturn in Ramsgate, to the point that of 17 trawlers, only two remained. Tom Brown joined his brother in North Shields – but within a year he was back at Ramsgate. The fishing had picked up, with improving methods such as pair-trawling for cod, herring and sprat in the winter and twin-rig trawling for sole and plaice – developed locally by Essex fisherman Peter French. If all else failed, it was off to Rye to do some scalloping. But one of Tom’s comments then was: “What the Ministry wants is the fish to fit the boat – as far as I can see, they want to diminish the under-10 fleet.”

In the late 1990s, some of the larger Ramsgate boats started taking decommissioning or selling their licences for aggregating. Many fishermen were feeling the pinch due to the lack of quota – and a lack of support from the Kent and Essex Sea Fisheries Committee. However, under-10m vessels were becoming more viable, with improving technology and fishing methods. 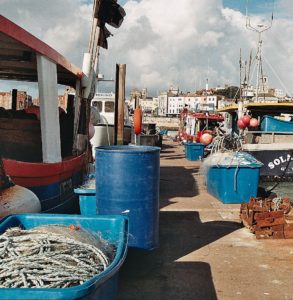 Day-boats berthed at Ramsgate after a day’s fishing.

There is a very active and supportive Fishermen’s Association at Ramsgate, and it makes its views well known to the local MP and the fisheries minister. Safety is a particular issue; the shipping lanes off Ramsgate are very busy.

Paul Cannon, director of Ramsgate-based Audacious Marine, whose Cougar range is one of the most popular for inshore fishing, said: “My late father was a traditional shipwright by trade and former coxswain of the Ramsgate RNLI lifeboat. We design and develop our vessels with a quality build that relates to all aspects of safety at sea. Having experienced commercial fishing myself, I really do feel for the hardships our local fishermen are going through during the current times. Leaving the EU and then to be hit by the Covid-19 virus has really put pressure on their daily lives.”

The recent decline in fishing has been noticed right across the Thames estuary, with fish stocks at an all-time low. The saga of pulse fishing off the Thanet coast had an adverse effect on catches, and now there are the supertrawlers sucking up all and sundry from the seabed. 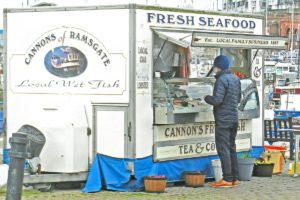 The only surviving wet fish outlet in Ramsgate is the stall run by Ian and Sarah Cannon – but this is now expanding due to increasing demand for fresh local fish.

Ian and Sarah Cannon own Ramsgate’s only remaining independent fishmonger. Ian is also the current Ramsgate RNLI coxswain, and the family association with both the town and fishing goes back several generations. Ian said: “I try to source our seafood from local boats as much as possible, but have found this increasingly difficult due to dwindling local catches, which means I am now relying more on getting fish from Billingsgate fishmarket.”

One good point is that more people are now keen to source local fish, and as a result Ian is in the process of enlarging his stall. He said: “We have issues catching fish and issues selling them – things have changed for the worse. However, we won’t give in!”

Tom Brown said: “Currently there are between 12 and 14 boats fishing from Ramsgate. Two years ago, there were 28. We now have one wet fish outlet for the town – again a sign of the times. Our own government, with the lousy deal they have got from Europe, will, I believe, exacerbate the demise of fishing from Ramsgate once again.

“Every day I wake and reflect on the good days of sustainable fishing and a happy fishing community – I so much want it to return in my lifetime, so we can encourage future generations to return to the fold.” 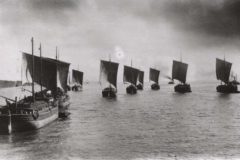 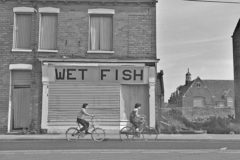