Women in fishing in the spotlight

Fifty percent of potential new recruits to the fishing industry are being lost because women do not, by and large, want to make a career in the industry, reports Tim Oliver.

This was one of the comments made in a Fathom podcast that looked at the role of women in the fishing industry. A number of women involved in different aspects of the industry took part, including some who worked on fishing vessels.

The podcast pointed out that there is a lack of data on women in fishing, which an Exeter University research project aims to rectify. A small number of women work on vessels, but most of those who are involved in the industry work in a support role. This is often helping husbands or partners with the shore aspects of running a fishing vessel, or in fish processing, selling fish and other fish-related businesses and activities.

The podcast set out to shed light on understanding women’s role in fishing, and look at what could be done to make them more visible and their voices heard.

It discussed how to overcome the barriers to women entering the industry, how to ‘get beyond the archaic system of dividing roles by gender’, and how to get women to engage with the industry. It was pointed out that the male-dominated environment of the fishing industry can be intimidating for women.

Dr Madeline Gustavsson, the lead researcher on a Women in Fisheries project being undertaken at Exeter University, said there was a lack of knowledge about what women are doing in fishing.

She said it was difficult to make the role of women more visible throughout the supply chain. It was complex, with ‘a lot of layers’, and women were often unseen in fisheries statistics, although there is more interest in the issue nowadays.

Dr Gustavsson said that women make contributions through their support for families and businesses, but their role was seen as secondary to actual fishing.

At a workshop she organised, women said they were paid less than men and that there was ‘an element of invisibility’ to their work.

Discussing the barriers to women becoming involved in fishing, the podcast heard that there were still superstitions, such as that it is unlucky for a woman to be aboard a vessel.

Boats also lacked facilities for women, and there were privacy issues. Women are perceived as less able than men to carry out the heavy work associated with fishing – although they find ways to adapt, as do weaker, smaller men. It was also pointed out that work ashore carried out by women often involves heavy work, such as lifting heavy fish boxes.

Dr Gustavsson said that there was prejudice against women in the male-dominated, masculine culture of fishing, where they were often not taken seriously and were viewed with suspicion. Women in fishing should be seen as ‘more natural and not exceptional’, she said.

A friendlier environment and equal opportunities were needed to encourage young women into fishing and fishing-related businesses, as well as trying to get daughters of fishing families involved, just as sons are.

Dr Gustavsson said that women in the industry needed to be in touch with one another, and she had set up a Facebook group to encourage this.

Women working on fishing vessels also contributed to the podcast. Ashley, from Wells-next-the-Sea in Norfolk, said she had worked on a fishing boat for two years, after working in an office. It was her ‘absolute dream job’, although she had taken ‘a massive risk’ in making the move. It was hard work and long hours, but ‘there is no part of the job I really dislike’, she said. Fishing was ‘like Marmite – you either love it or hate it!’

But, she said, being at sea doesn’t fit in with family life and children, and women needed a support network. She had started on a charter angling boat with a friendly skipper, but other skippers could be ‘quite intimidating’.

She said that one way to get more women into fishing would be to engage with schools and set up an apprenticeship scheme – something the Cornish PO is working on, as the podcast pointed out. It also needed skippers with ‘a bit of patience, willing to take girls on’.

Elaine, who works on a prawn trawler in Pittenweem, said she ‘absolutely loves it’. She enjoyed the freedom of being at sea, the sense of independence it gave, and the opportunity to see marine wildlife.

A woman from Newfoundland, working in fishing and brought up in a fishing family, advised women who wanted to go to sea to ‘hone their instincts’ for self-preservation, to carry out research on the background of skippers, and to stand up for themselves if they had concerns over issues such as work contracts and safety.

The podcast also featured women in a variety of other roles in fishing, including Beshlie Pool, who works in a representative role for South Devon and Channel Shellfishermen, Sarah Ready, a fisherman’s wife and ‘shore manager’ of the small family business in Brixham, Emma McKeating, a fishmonger from Grimsby, and Elaine Whyte, secretary of the Clyde Fishermen’s Association.

The full podcast can be heard at: cfpo.org.uk/the-fathom-podcast 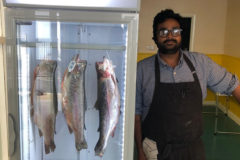 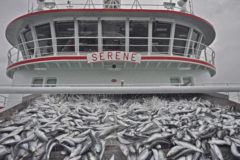