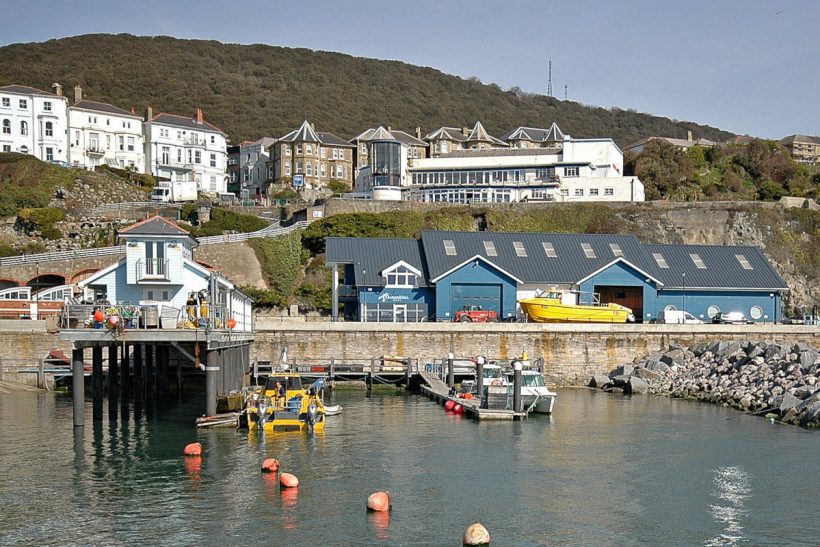 Cheetah Marine, based at Ventnor on the Isle of Wight, has sold over 500 Cheetah catamarans since the well-known boatbuilding company was established.

It was 28 years ago that Sean Strevens designed and built his first 6.2m Cheetah catamaran, in one of the barns at Bonchurch on the Isle of Wight, where his father Keith Strevens ran a farm. 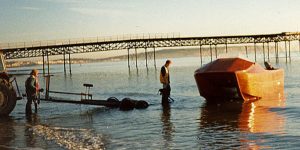 Cheetah number one, designed by Sean Strevens at Ventnor in 1989…

A lot has changed since those early days. Sean used to fish off Ventnor beach in a small double-ended clinker wooden boat, later moving to his own fitted-out GRP boats. Some were good in a head sea, and others in a following sea, but never together on the same boat. The new 6.2m catamaran was the answer, handling the rough weather and beach landings perfectly, with Sean describing Ventnor as the perfect place to design and test the new 6.2m Cheetah.

“It took me a year to design and build the first 6.2m Cheetah,” he said. “I used West System’s epoxy resin and double diagonal 4mm Anchor marine plywood, with the frames made of Tasmanian oak from an old hotel dance floor. The result was a very strong, lightweight hull. I used the 6.2m for a couple of years’ commercial fishing, which attracted a lot of interest from the local commercial fishermen. This encouraged me to take the hull back to my dad’s farm where, after removing the foredeck, it was turned upside down. It was then filled with 20 tins of car body filler, and sprayed with a shiny top coat, to produce a hull mould.” 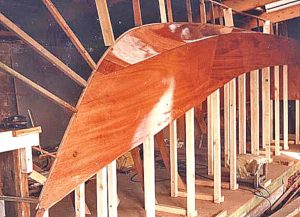 Sean then redeveloped the foredeck and made a mould from that, before putting the wooden catamaran back in the water to carry on fishing.

“That got us going, and from there, we started developing the range, the first being the 6.9m, which is still going strong today.

“We have now developed a range of boats up to 11.2m, with a 12m on the way. All have slightly varying design developments to suit a mix of markets. Fishing boats have always been our main source of production, but mixed with this we build hydrographic survey boats, patrol boats, leisure angling boats, disabled access boats and charter boats. 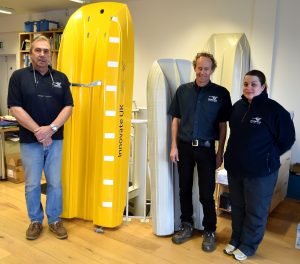 “Our hull shapes have developed over time, and we have also tank-tested several models at the Wolfson Unit in Southampton University. This, along with computational fluid dynamics (CFD), helps us to develop the range further, particularly in relation to hull resistance and fuel consumption.

“Of course, you can’t beat testing the boats in the water, in a gale of wind as well.”

When Sean started, he employed some very experienced boatbuilders, while he worked on the design elements of the Cheetah catamarans. Living on an island with a rich nautical heritage meant that it was easy to find quality workmanship. In the past, the island has had many different factories, building and designing vessels from hovercrafts to seaplanes.

Materials are also a very important part of the design and build process. In the late 1990s, Sean found Nidaplast being used at an aircraft facility on the island. Light and strong and not absorbing water, this material was ideally suited for the construction of Cheetah catamarans, and was a major step forward compared to traditional GRP-coated plywood decks and bulkheads. Sean was then invited to become a member of the Royal Institute of Naval Architects. This was a big moment in his boat design career.

“We now have a 35-strong workforce and a new GRP building, along with our metal workshop and seafront fit-out factory. Each factory is dedicated to specific tasks, and the final stage is launch and testing off the coast of Ventnor, where it all began.

“In the Ventnor workshop, we currently have a 10m commercial fishing boat, an 8.5m hydrographic survey boat, and a 6.2m new-build for the west coast of Scotland. The survey boat has the new D-torque Yanmar 50hp diesel outboards fitted.”

Sean Streven’s father Keith, now 80, still works at the office on the seafront, and enjoys meeting customers and showing them around the factory.

Cheetah has a lot of loyal customers, many of whom started with a 6.2m vessel and then worked their way up the size range. The second-hand value is good for Cheetah boats, which helps when people want to upgrade. 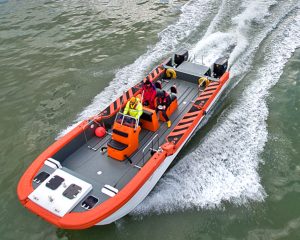 “It was fishermen in Scotland who first showed interest in our boats – this was over 28 years ago,” Sean said. “This was followed by Wales, Cornwall, and the east coast. Once fishermen see a Cheetah in action, they realise the quality of the design and build. Also, customers know that we can bespoke-build a Cheetah to their exact requirements and expectations. We encourage them to visit Ventnor to see their new boat in production, when they can tweak the final stages of the fit-out if they want to.

“When customers or owners visit, there is always a lot to see at our factory, as we can, at times, have up to eight boats in different stages of production.”

Cheetah Marine has now set up a factory on the Atlantic west coast of Portugal at Nazaré, which is noted for the highest wave ever to have been surfed in the world. 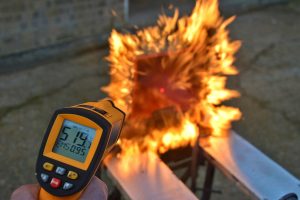 “It is a good place to test our boats, and I have always been an advocate of wanting to see first-hand how they perform – this was the case when I built my first Cheetah. It all helps in perfecting their design,” said Sean.

The Portuguese fishing industry is mostly made up of small inshore boats working from many exposed harbours. Local fishermen catch a variety of species, which are largely sold to the hundreds of seafood restaurants up and down the coast. It’s a wonderfully sustainable fishery, says Sean, and the fishermen and commercial charter market will benefit from the rough-weather capability and safety which Cheetah can offer them with its latest designs. 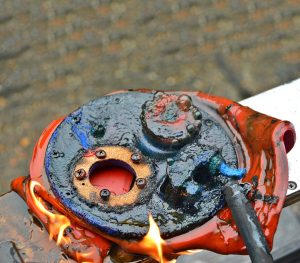 “This also gives us a European base for the future, which could be handy in the current situation, and this is something we considered when we decided to start building in Portugal.”

Outboard engines play an important part in the design of Cheetahs. “300hp diesel outboards are on their way, which we are very excited about. These engines will suit a variety of commercial and leisure markets.

“Petrol outboards are now so well-developed that their efficiency, low emissions, reliability and safety are the perfect choice for our commercial fishing boats.” 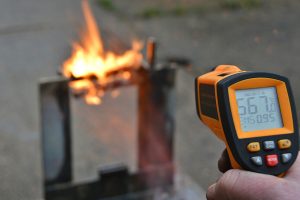 Several ongoing issues have recently arisen. After initially fuelling frustration among boatbuilders and fishermen in relation to Seafish, these are now being addressed through extensive discussion.

Sean Strevens said, “We have worked closely with Seafish for many years – way back to when Rod Watts ran Seafish, and we could use our local Yacht Designers’ and Surveyors’ Association (YDSA) surveyor. Using a local surveyor and the MCA certifying authority was more efficient; it kept costs down while retaining the essential safety features of our boats. Sadly, Seafish has become rather bureaucratic, and costs have risen without any real increase in safety.”

Fishing News has also met other boatbuilders with similar views – in particular Audacious Marine, based at Ramsgate in Kent, which is experiencing the same issues. Paul Cannon, one of Audacious Marine’s directors, met with Sean in 2018 to discuss their concerns, and both agree that changes need to be made. These are now being discussed.

Technology will, of course, change in the future, and Cheetah doesn’t intend to miss out. The company has tested hydrogen power, and has successfully circumnavigated the Isle of Wight powered by H2 with zero emissions; it has built an 11.2m Cheetah for testing as an autonomous surface vehicle. Cheetah is also currently working with a company to design and develop a 165kW electric outboard engine.

There is no doubt that the Cheetah Marine team are extremely dedicated to what they do. They don’t rest on their laurels.

As the saying goes, ‘Once a Cheetah owner, always a Cheetah owner’. Repeat orders often follow – Cheetahs are proven workhorses, and among the safest fishing vessels built.

There is no doubt that having a fisherman at the helm is what makes this company thrive. With over 500 Cheetahs sold, Sean and his team continue to contribute to the island’s nautical heritage and stability.

In conclusion, Sean Strevens said, “Clearly, I want to see the fishing industry survive, and I firmly believe that small sustainable vessels have a key role to play. These vessels, and the fishermen who run them, should be helped, not hindered, by bureaucracy. Design and technology will play an important part in the future, and Cheetah, as always, intends to lead the way.” 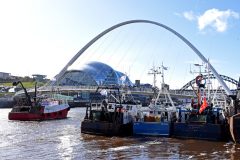 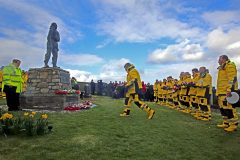 The heroes of Longhope remembered