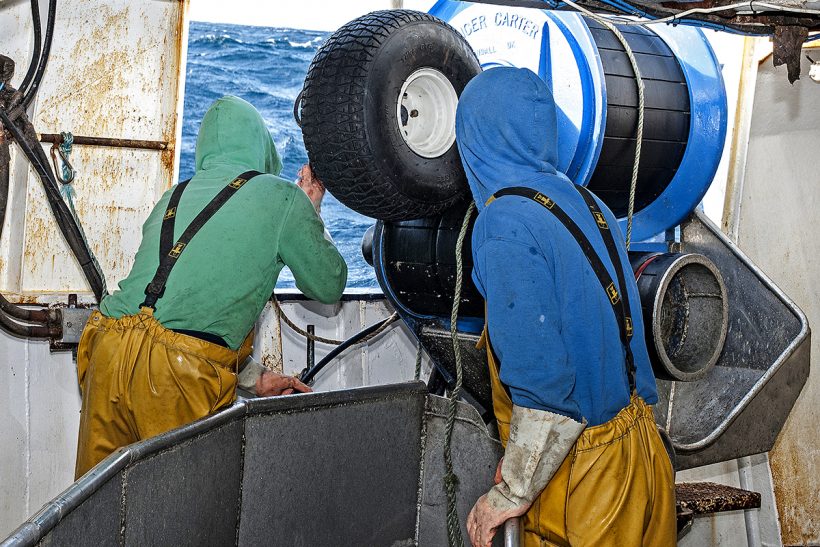 At sea on the Newlyn netter Joy of Ladram

As part of his ongoing commission to photograph and document the fishing activity of boats working out of Brixham and Newlyn – for a local company’s website (greendalefarmshop.co.uk), head office and farm shop – photographer Tony Fitzsimmons captures the action onboard the Newlyn netter Joy of Ladram E 22 catching MSC-accredited hake off Land’s End.

As I sat on the train leaving a stormy Plymouth behind for Newlyn, where a similar forecast prevailed, I’ll admit, I wasn’t looking forward to my next trip out at sea.

Several months had passed since being at sea on the Brixham Eurocutter, Angel of Ladram. With November weather and rolling waves very much on the cards, together with much shorter hours of daylight, as well as some additional weight I had put on after spending a good deal of time sitting at my desk, working on my website and plotting various plans for next year, all I could think about was how unprepared I felt at this moment, and how soon it would be before I was sick. That still seemed to play on my mind.

By the time I arrived at Newlyn harbour, I was completely soaked, and this was just from a five-minute walk from a nearby bus stop. The rain was coming down hard, fast and heavy, yet as my eyes located the Joy of Ladram, a quirky smile did find its way through that initial grumpy ‘don’t-want-to-be-here’ exterior.

2016 and the opportunities given during it were fantastic; I was living the graduate’s dream, working in the field, documenting lives and livelihoods in a place not many would ever witness firsthand. I can’t thank Greendale and Fishing News enough for their support through this incredible journey.

So why those negative vibes? This whole experience did make me wonder, though. Do fishermen ever feel this way?

Their back-and-forth lifestyle at sea, of many days and nights, spent many, many miles away from the creature comforts of land and loved ones; this isn’t your typical 9-to-5 job by any means. Do they ever get that emotional ‘I-don’t-want-to-be-here’ state of being, just before another outing? 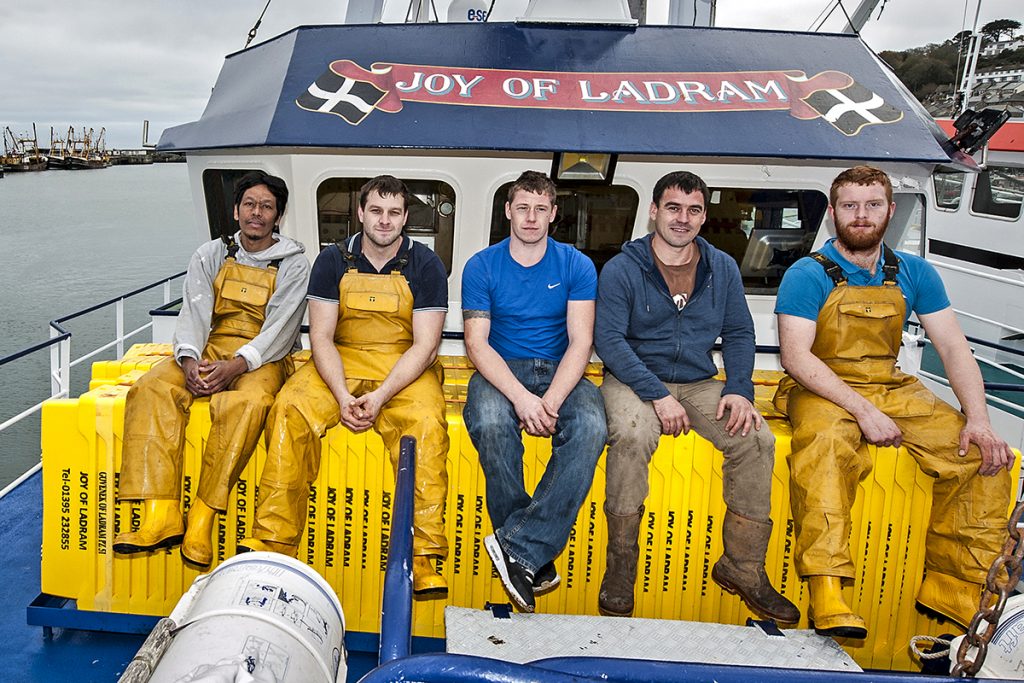 With seasons dramatically changing the seas, is winter a factor, and if not, why not? Because it certainly seemed to be the case with me. The work these fishermen do on a weekly basis obviously has to take a toll on them (just being onboard for a week clearly took its toll on me), yet still to this day I have not met an ungrateful soul onboard, or anywhere out at sea. Is it simply something in their blood?

Before my somewhat drastic, yet surprisingly positive, career change, looking back to long before I picked up a camera, I seemed to just drift aimlessly; I had no plan and the various retail and office jobs I held over the many years never appeared attractive enough as a long-term end.

I never thought I’d find myself, figuratively or literally, at sea. In the presence of fishermen, my younger, workplace, jokey self would have been continually put to shame, and not just in terms of their constant graft either; they actually seem content with their life choice. Back then, I never was, no matter what I was doing. They never complain, never wince or whine, they just carry on with their professional responsibilities in all manner of conditions; hot, cold, wet, windy, day, night, and always as a collective, and strong, bonded group.

The environment and elements can throw anything and everything at them and yet they just take it, dealing with it as the well-oiled team they are. There was me, many many years before I allegedly manned up, plodding on in an earlier life, dragging feet as I tried to figure out my purpose as such.

It has been over a year now since I began this project and it is slowly building into something more of a case study. With each and every outing my appetite is whetted just that little bit more, and the idea now of doing my Masters sometime in the future, based on this strikingly surreal and beautiful world, is certainly an interesting prospect.

I want to capture the imaginative and ongoing clash of extraordinary men versus Gods and monsters, in an arena so vast and intimidating, in every direction expansive, yet when viewed from a sandy shore, this and so much more is hidden in plain sight.

I need to know what makes these fishermen tick; why they are the ones out there doing what they do, versus someone like me who clearly wouldn’t last a day if I put the camera down and swapped trades. Even now, just looking at crews, I feel somewhat inferior, even if being around many this year has made me a better and more appreciative person. I used to think I had it hard as an 18-year-old serving another customer from behind the desk of a petrol station. 2016 was one heck of a wake up call.

Though back to the task at hand. 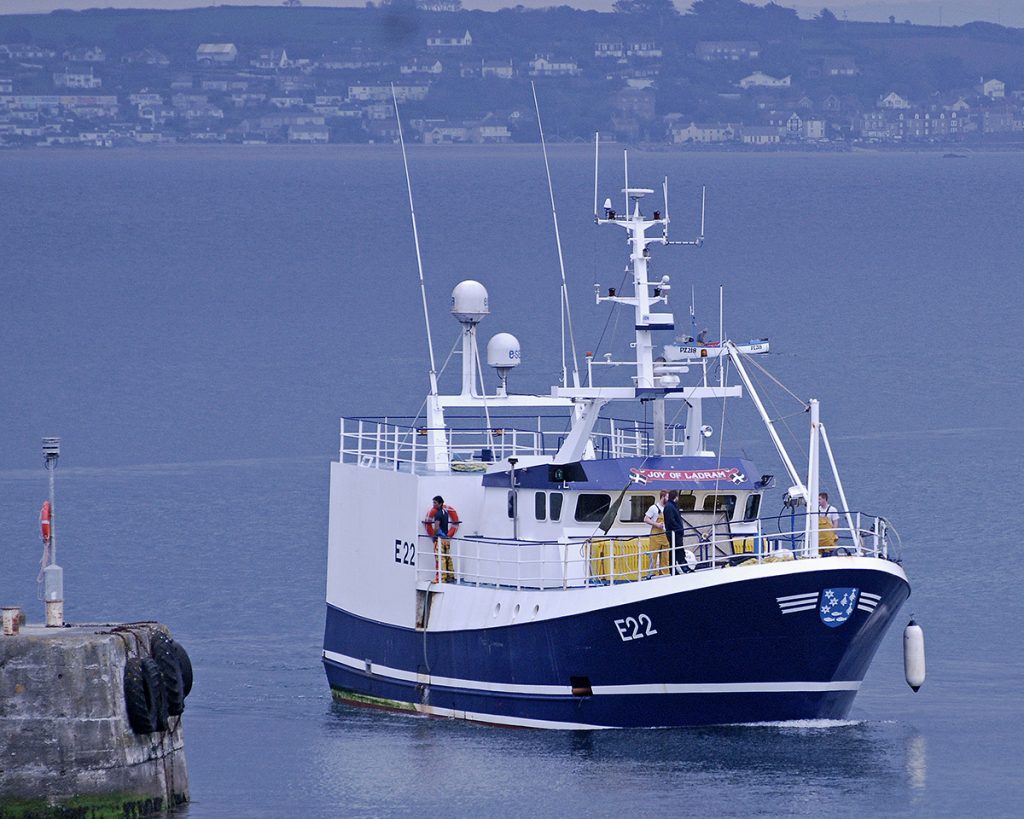 Joy of Ladram returns to Newlyn at the end of a netting trip.

Joy of Ladram is a 20m glistening beauty of blue and white. Skippered by James ‘Jimbo’ Mitchell, and with a crew onboard of four – Stacy ‘Boo’ Gambrill, Kyle ‘Kinz’ Knipe, Edward ‘Weg’ Jones and Jonathan Flores – it was immediately clear I was again in good hands. Despite being a younger bunch, compared to some of my previous outings, their wealth of experience as a collective, hard-working team fishing the south westerly seas showed exactly why they are held in such high regard in this region.

Jimbo gave me a full tour of Joy of Ladram, covering health and safety needs along the way, and with my bunk sorted, my gear onboard, and earlier silly thoughts beginning to clear like some warm sun through heavy grey clouds, we were ready to go. It was just a shame that the weather was still getting grimly worse.

The initial plan was to leave late on Tuesday afternoon, but with a force 8-9 still battering the coast, and continuing on through most of the night, the decision was soon made to remain in the harbour until the following morning. I decided to head back out in the rain and fetch a Newlyn fish supper; probably not my best idea given my majestic ability to bring it all back up again when at sea, but being an absolute sucker for chip shops, consequence versus that sweet smell went out of the window.

After bunking down for the night, morning seemed to come around as soon as my head hit the pillow. An hour or so, and we left the safe sanctuary of Newlyn. Thirty minutes later, and I threw up.

While Newlyn looked different from the day before, Joy of Ladram was driving behind the tail end of a, now very much diminished, yet still strong (in my eyes) gale and the image all-around of searing wind and churning rolling waves took me back to my first-ever outing and force eight.

I did my best to hold it in, seriously I did, maintaining the horizon line as waves crashed against the bow, knocking the netter back and forth, and, for a while, I thought I was going to get through this unscathed. The moment I decided to move from the wheelhouse to the deck below, my legs became jelly, and I was gone, deciding the only place for me was in my bunk until it blew over.

Sixteen hours later, I emerged from my bunk feeling like Lenny Henry after a night spent at a Premier Inn.

The rest of the week I was fine, the odd potential feeling here and there, swimming around in my gut, but nothing I couldn’t handle. Over the course of the trip, the sea continued with a rough posture, though a far cry from when we left Newlyn and it seemed as if I was slowly earning those sea legs once again.
The lads onboard worked meticulously hard throughout the course of each long working day, hauling miles of fish-filled nets aboard Joy of Ladram. The early evenings mimicked a weird sensation of midnight at 5pm, making it seem as if the crew were actually at it 24/7. 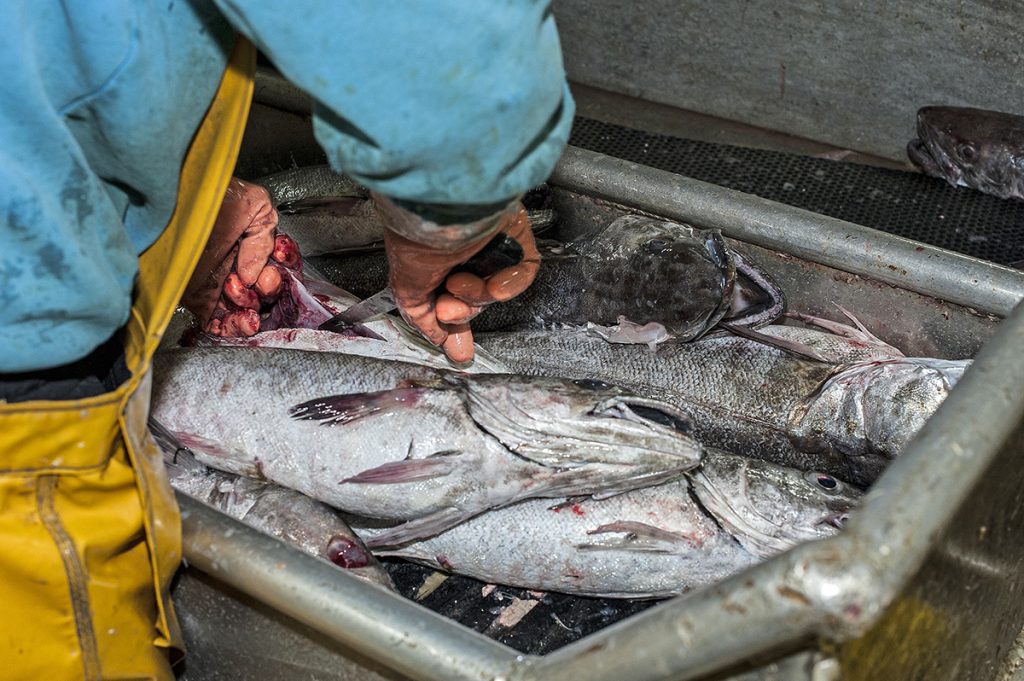 As a photographer who will always prefer the use of natural light over artificial, it made my job a heck of a lot harder, having to rely on a flash gun for the majority of my time onboard. Yet a previous trip on the Karen of Ladram, another Newlyn netter, had been a valuable lesson learned, and with a great deal of additional batteries packed this time, as well as a better understanding of how to bounce light in and around what was essentially a large metal container, I came away pretty happy with the results. The full series so far can be viewed on my website at: tonyfitzsimmons.com

I expected to return home the following Tuesday/Wednesday, and so when Jimbo mentioned we were heading back on Saturday, I was somewhat surprised. The Joy was full of predominantly MSC hake from the waters 60 miles north west of Land’s End, and with a tidal change imminent, the lads had earned a well-deserved week off, having spent much of the past month back and forth out here.

The strange thing was, after beginning the week not wishing to be out on the seas in November, had I been offered the chance, I would have happily stayed onboard with the skipper and crew for another good few days. Perhaps I had forgotten just how amazing I had it. Perhaps, and just like the other Waterdance vessels, skippers and crews, Jimbo and the lads were another perfect bunch to be around.

In many ways, I was glad I felt the way I did at the start of the week as it put this moment and future moments into perspective. With plans now drawn up well into next year and beyond – including this month seeing me undertake my ‘standards of training certification and watch keeping for seafarers’ (STCW 10) over five days, allowing for a much wider variety of vessels and livelihoods to document – offshore wind farming would be soon added to the mix, alongside further fishing vessels.

After arriving in Newlyn on Saturday morning, I returned back very early on Monday to document Joy of Ladram landing. The whole week had been another great experience, and I felt like my year was ending on quite a high. I had spent over six weeks out at sea, and while this was not a huge amount to any fishermen, to me it was a pretty big deal. This year I hope to double this figure at the very least, beginning with the remaining Waterdance vessels to end this commission and to generate a true focus and understanding into the lives and livelihoods of UK fishermen. 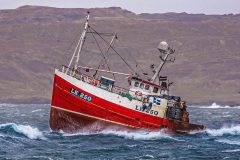