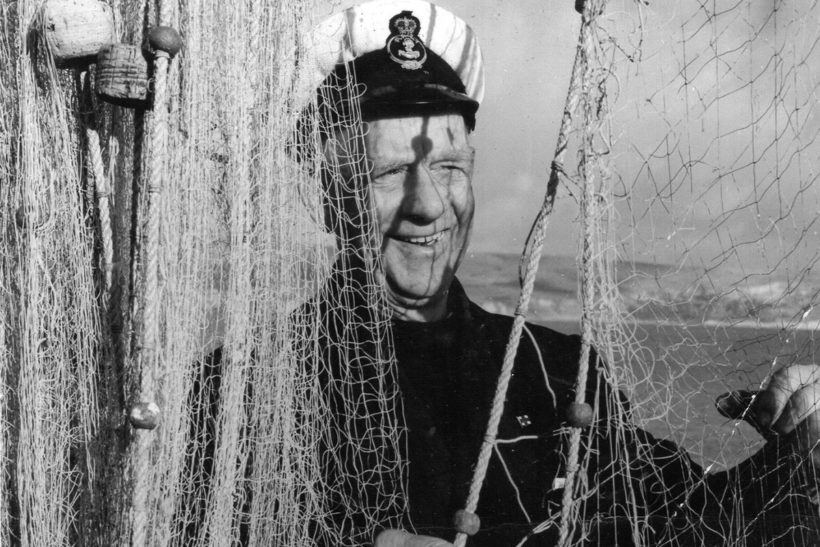 The sea was in his blood – Robert Charles ‘Bobby’ Brown was born in 1901 into a prolific fishing family. His father Charlie and uncles were all fishermen, and he went to sea from the age of six.

The family fished for crab in the spring and lobster in summer in 14ft open clinker boats powered only by oar. Pots were made of cut withy from local beds, ballasted with beach boulders. The lines were made up of hemp and sisal rope, with cork floats as markers. The gear was fragile and only lasted a season – or, worse, one bad blow – so pot-making was a continuous labour.

In the winter, they used small drift-nets to fish for herring. A watchful eye was kept over the bay for an oily sheen, giving the signal that herring had come near the shore. On numerous occasions, the small boats came back to the pier fully loaded to the gunwales with fish.

The family also owned a fishmonger, which was a great asset when it came to retailing the wet fish they caught. Plaice, Dover sole and skate were netted when the shell fishing was slack. The railway was also another great advantage at the time, allowing live lobster to be shipped to Billingsgate, keeping the price high and resisting the pressure from the local hoteliers and restaurant owners who formed a buying cartel.

Bobby began his long and distinguished career in the RNLI in 1917, joining the crew and being appointed second coxswain in 1934. A RNLI inspector at the time wrote in his log of Bobby, ‘he could navigate east of the station to Newhaven and west to Fowey, and also read a chart well’.

Shortly after being promoted to second coxswain, he received the institution’s bronze medal for his part in the rescue of the yacht Hally Lise. He jumped overboard in his full oilskins, seaboots and lifebelt to rescue a drowning man. He supported him until the lifeboat could come about and pick them both out of the sea.

In 1941, he was made up to coxswain and commanded some very brave wartime rescues. He assisted in rescuing the crew of a stricken submarine, and saved the lives of French seamen on a covert mission when their launch Chasseur 5 capsized in heavy sea off the Dorset coast. The French navy awarded him a silver gilt French Lifeboat Society medal for his actions which he was very proud of – but fishing was the love of his life.

By the mid 1950s he had progressed from 14ft fishing boats powered by oar and British Seagull outboards to an 18ft open boat, the Swan. Fitted with a Stuart Turner petrol inboard, this allowed him to fish lobster grounds further afield, west of Durlston Head to the Anvil and Ragged Rocks to Blackers Hole.

In the autumn, he swapped to prawn fishing, working 40 small withy pots on ‘skate ground’ half a mile NNW of Peveril Ledge Buoy. Using heavily salted plaice frames, and mackerel for bait that had been in brine for up to a year, he regularly filled four one-gallon buckets with prawns on a single haul.

In the late 1960s Bobby sold the Swan to local fisherman Fred Dashfield and bought a varnished clinker-built Beer Beach boat, Pelican. She was 20ft long with a full 7ft 3in beam and had an air-cooled Petter diesel engine and manual capstan. The capstan worked off the front end of the engine by engaging a dog clutch, and enabled him to haul strings of pots in deeper water and stronger tides.

Both Bobby’s nephews followed in his footsteps. Michael completed a shipwright apprenticeship with Bolson’s on Poole Quay and then started fishing, working on the scalloper Catherina Corneilla out of Plymouth and the Ros Brighdie LO 247 lobster fishing from Islay on the west coast of Scotland. He went on to fit out a Saltrum 20, Roger, for inshore fishing in Dorset. Bobby’s other nephew Roger was a well-known local mullet ring-netter and crewed on the crabber Superb BM 183. He also served as a lifeboat crewman.

Bobby’s son, also Robert, never took to fishing, but served in the Royal Navy and pursued a career in acting. One of the more famous roles he played was Spymaster ‘M’ in the James Bond movies A View to a Kill and Octopussy.

Bobby retired from the RNLI in 1966 and was awarded the BEM for his services. One noted rescue took place on 8 May, 1965. Fellow fisherman and lobster legend Maurice Lane was hauling pots in his 32ft Dixon-built potter Lucky Me off Lulworth when they spotted a man stuck on Gad Cliff. Unable to make a rescue, due to a heavy ground swell and increasing wind, they steamed 12 miles back to Swanage, raising the alarm.

The wind was now blowing a full SSW gale and the lifeboat was launched with a crewman, Raymond Blanchard, from the Lucky Me to guide them to the casualty. With assistance from shore-based coastguards and the police, the man was safely rescued. The crew of the lifeboat were all awarded an inscribed vellum from the committee of the RNLI in recognition of their work.

Bobby retired from fishing in the late 1970s and sold the Pelican to Steve Mason. Bobby’s nephew Michael refitted her with a wheelhouse and mackerel gurdies to join the South West handline fishing fleet in Newlyn.

Bobby Brown died in 1989. In 1991, Swanage was commissioned with a new Mersey-class lifeboat funded by public subscription and named Robert Charles Brown in his honour. 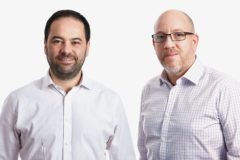 Sunderland Marine: Getting out the safety message 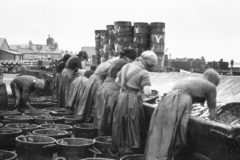