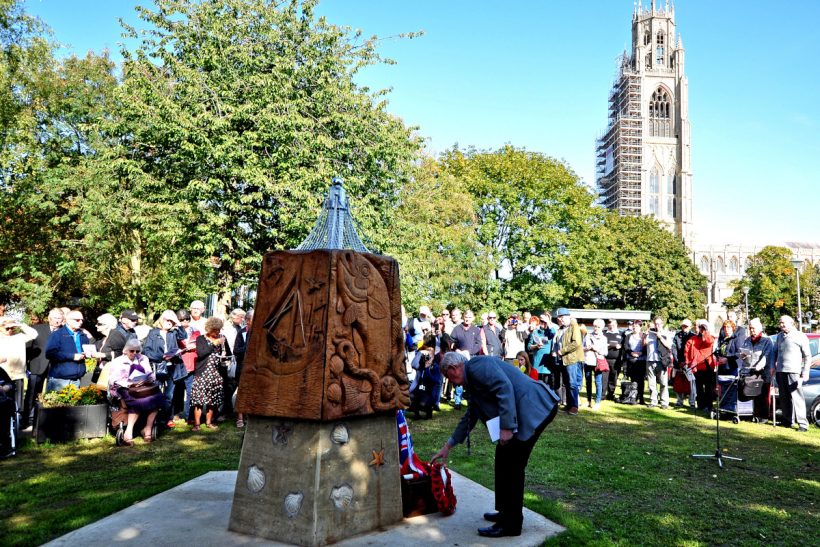 On 18 September, a warm, sunny day, in Boston, Lincolnshire, a carved wooden tribute to the town’s lost fishermen was unveiled, reports John Worrall

It stands on a patch of grass close to the pedestrian bridge over the river Witham, within sight of the 81m church tower of St Botolph’s, known universally as the Boston Stump. The Stump, completed between 1510 and 1520, offers panoramic views over the flatness of the Fens and, more importantly, over the Wash – and it quickly became a navigation aid for mariners negotiating the treacherous shoals. 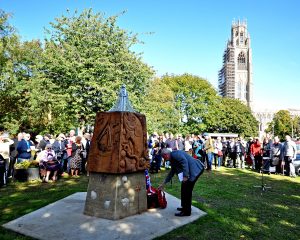 Wreaths were laid during the dedication service of the Boston memorial to lost fishermen.

Fishing has always been a dangerous business, and vastly more so in wartime. In late June 1914, in Sarajevo, Archduke Franz Ferdinand was shot and killed by a Serb with what turned out to be the starting gun for the First World War. The resulting Prussian declaration of war against Serbia triggered a domino effect of defence treaties which led to Britain joining hostilities on 4 August. Straight away, North Sea fishing vessels were in the firing line. 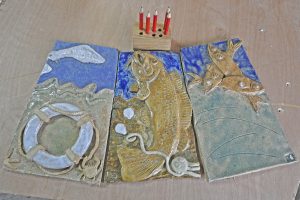 The designs on the panels are derived from originals…

Boston, in particular, was quickly on the receiving end, with 10 of its trawlers captured or sunk that first month, and their crews taken to Germany and imprisoned. At least one boat then reappeared, repainted, under a German reconnaissance crew.

The experience of that month crippled Boston as a deep-sea fishing port for the rest of the war, with trawlers tied up, partly deterred by mines near the Outer Dowsing – although seven were refitted for patrol or mine sweeping and were soon back at sea. Trawlers, with their power and endurance – a fish hold full of coal could keep them going for three or four weeks – were particularly good for sweeping, although their greater draught than that of drifters made them more vulnerable in minefields. 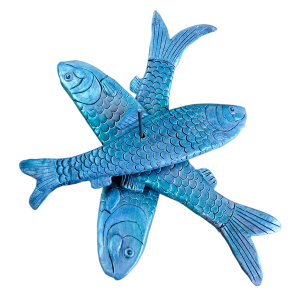 … in ceramic by Jane Kay.

Twenty-two of Boston’s steam trawlers were eventually lost to enemy action, and 91 men and boys taken prisoner, four of whom died in prison. Overall, 80 Boston fishermen lost their lives during the war years, with another 28 local men killed when sailing from other ports.

It is to their memory, and that of all others lost in whatever circumstances, that the memorial is dedicated, but the way it has come about is an indication of the community cohesion of this Wash port. The idea of the memorial started with a Tree – Peter Tree, to be precise, woodworker (and specialist chairmaker, as it happens), who was sponsored by local community organisation Transported and the Arts Council to start a woodworking group for anyone interested. He put up notices, and shortly had a handful of complete novices carving wood out in the woods on the edge of Boston.

Among them was Jane Kay. “I’d never tried woodcarving – I am an artist working mostly in paint and ceramics – but I thought I’d give it a go. We first met up in spring 2016, just four individuals initially – me, Colin Briggs, Iain Braid and Dereck Harvey, with Peter as our mentor. 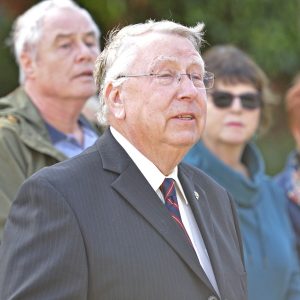 “Transported granted us the money to buy some oak, and we worked alongside each other, creating signs for Witham Way Country Park. And then we went on to carve a model of the Stump itself, which raised a lot of interest. It still stands there near the woods beside the river.”

Colin Briggs takes up the story. “But then winter came, and forced us out of the woods. We decided that we wanted to stick together as a group, but we had nowhere to go except Dereck’s shed, nor did we have enough money, or people, or anything.” 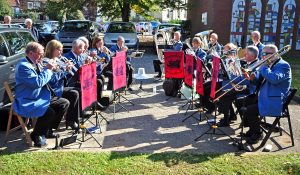 So they decided that they had to bring some sort of formality to the group, in order to apply for funding. “To get a bank account, we had to call ourselves something, and so we became the Boston and South Holland Woodcarvers.”

They also had to have officers, and so Dereck became chairman, Jane became treasurer and Colin secretary.

“And that was the start of it,” says Colin. “As secretary, I wrote to the leader of the council, Peter Bedford, in November of that year, seeking workspace and the council’s support for the idea of a ‘tribute’. To gain publicity, we carved little wooden mice and hid them in the Stump, which drew the attention of the local press. Following this, we were kindly offered space for a twice-weekly community workshop – right in the middle of the nave.” 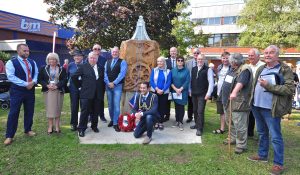 Team photograph of everyone involved in the Boston memorial project.

There they met and worked, storing their equipment in a back room between sessions. By then there were eight of them, sometimes more. Visitors walking through saw what was going on, and started buying the mice as mementos of Boston. Those Boston mice have been taken away to many parts of the world.

It was during that time that the acorn of the memorial idea began to grow – although again, it was a question of money. 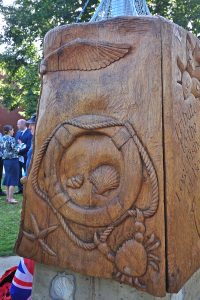 One of the five oak panels that form the memorial, varnished and ready to face the elements.

“But then, another local charitable organisation, the Worth Waynflete Foundation, actually contacted us, and said they’d heard that we might need funding for a project,” says Jane. “And I said that we needed oak because we were going to make this fishermen’s tribute. And they asked how much, and I said probably about £800, which they immediately gave to us, and suddenly we were away.

“We went to the wood yard with Peter and chose the tree we wanted, and had it chopped into five panels, and had those shipped to the Stump. And six of us worked on them – Dan Hold, Sandrae Dickson, Iain Braid, Dereck Harvey – who had to drop out for a while and handed his panel over to Peter Henson – and then myself. And that’s how the memorial started.

“But we still needed money for trestles, tools and lights, and so we approached Boston Big Local (part of the National Lottery community fund), which is administered by residents who decide what the community needs. They had already helped to tidy up the patch of land where the memorial now stands, and the tribute became the icing on the cake. It’s now a really pleasant riverside place to go, rather than the somewhat scruffy part of town that it previously was. I think people are beginning to respect the fact that they’ve got art to look at.”

But it’s one thing to carve the panels – getting them to stand on display in perpetuity is another entirely.

“While we were working on the panels in the nave, one of our members, John Goodwin, who is also good at fundraising for us, would be talking to people about what we were doing, and over that year or so, he managed to get about £1,000 in contributions. It was that money which eventually settled the bill for the engineering to make the supporting framework.”

The team took the panels to DS Engineering in Boston, who made a steel frame to which the panels were fixed. Now, on site, the whole five-sided assembly is mounted on a concrete plinth, inlaid with ceramic scallop shells and starfish, which raises the panels to easy viewing height.

The inlays, and more particularly the motifs on the timber panels themselves, are modelled on original designs produced by Jane Kay. The shells and starfish were made with help from her husband David Biggadyke, Dan Hold and Judi Kay.

The unveiling ceremony, organised in conjunction with the Fishermen’s Mission and attended by well over 100 people including the mayor of Boston, Councillor Anton Dani, was led by lay pastor Billy Mackenzie from the Scottish fishing village of Burghead on the Moray Firth, who was, as he said, ‘made in Boston’.

Prayers were offered, hymns were sung to the accompaniment of the Swineshead Silver Band (founded in 1886), and wreaths were laid. Tea and biscuits were served afterwards in the Municipal Buildings.

Meanwhile, the woodcarvers have had to move from the Stump, because renovation work there has now involved the taking up of the floor. They are presently working in an upstairs room at Shodfriars Hall in the town centre, an appropriately timber-framed building – one that dates, in part, back to the 14th century. However, its construction means that every hammer impact on woodcarving chisel reverberates throughout the building, and anyway, lugging timber to first floor level isn’t ideal.

But the plan is to move the larger pieces of wood to the Willoughby Road allotments – Jane is also secretary for the allotment association – where there is a polytunnel and a community building. The Boston Town Area Committee has suggested that further funding may be available, and has already offered funding for a container to store equipment.

“It’s a fantastic environment up there,” says Jane. “There are trees, and footfall through from the hospital. It’s an open community space, where we plan to work outside as much as possible. So it will be a good place for us.”

And what will they be working on? Well, Boston’s maritime history runs at least from Roman times, and then through the Hanseatic League, which was big in Boston in the 13th and 14th centuries. But more specifically, it was a setting-off point for religious refugees who, in the 1620s, headed west to the New World colony of Massachusetts, where they would establish another Boston.

That is another piece of Boston’s story which needs a memorial – and with a bit of marketing across The Pond, there could be an even bigger crowd at that unveiling. 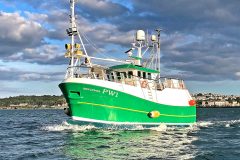 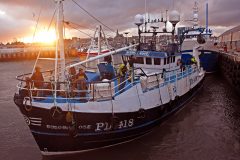