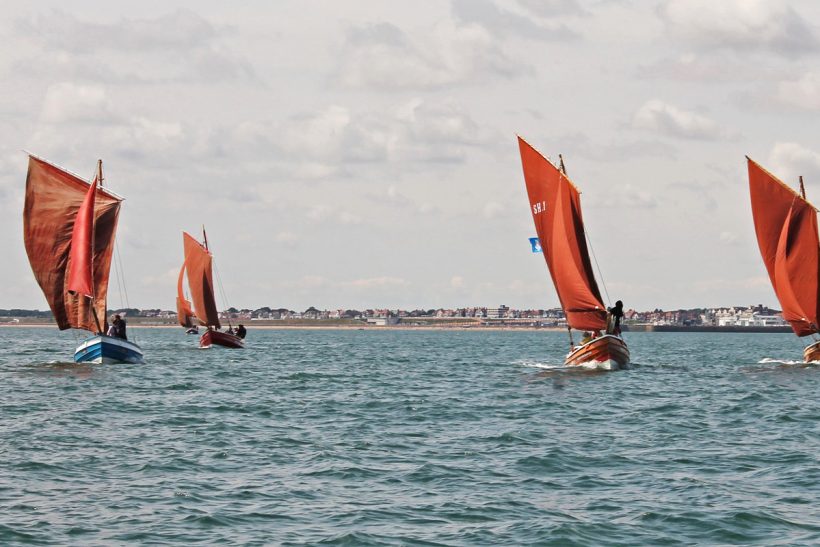 Bridlington, on the East Yorkshire coast, was once again the setting for the 2018 Sailing Coble Festival over the weekend of 4-5 August. The increasingly popular festival attracted the highest number of sailing cobles to date, and is now a keenly anticipated annual event on the maritime calendar, making Bridlington the sailing coble capital of Great Britain.

Sailing cobles started to arrive by road the previous week when Avail, now owned by Graeme Ratten of Henley-on-Thames, was lifted into the harbour by the boat hoist. She had been brought to Bridlington early so Graeme could get in some sailing before the festival with his coble and new rig. Avail, built in 1977 at the J & J Harrison yard at Amble as a motor coble, was rigged for sailing earlier this year by Graeme and his friend Colin Henshaw to replace his double-ender Mavis, which sank in Torquay harbour in June 1977, causing Graeme to curtail his circumnavigation of the British Isles. 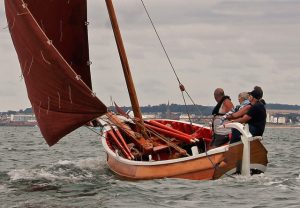 Free Spirit, one of two cobles built at Bridlington in 2014, sailing hard in North Bay.

Royal Diadem II was also transported by road from her home on the Tyne, brought down to East Yorkshire by members of the Bridlington Sailing Coble Preservation Society (BSCPS) on the society’s trailer. Built in 1948, also at Harrison’s, for William and Albert Silk of Newton-by-the-Sea, her working life in fishing had taken her to Craster, Blyth and South Shields. Now under the care of the North East Maritime Trust, this was her first venture down to the Bridlington festival. 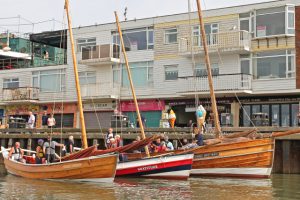 The lovely foy coble Grace, built by Arthur MacDonald at Whitburn in 1990, also came by road from Staithes and was lifted into the harbour in readiness for the start of the Bridlington event. Owned by Liz and Chris Wilson, Grace can usually be seen on her mooring in Staithes Beck when not out sailing.

David and Colin Warwick brought Christina from Mevagissey in Cornwall, a distance of almost 400 miles by road, for her second appearance at the festival, and she arrived mid-afternoon on Friday to be lifted into the harbour by the South Pier crane. Christina was built in 1972 by J & J Harrison and was originally named White Maa. Having spent time in the Blackwater area of Essex and at Neyland in Pembrokeshire, she finally came to be at Mevagissey via the Newcastle area, Cullercoats and Amble. 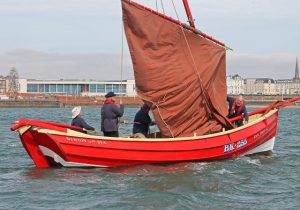 Hoisting the dipping lug sail on Royal Diadem II, on her first visit to the Sailing Coble Festival.

Another coble lifted into the harbour early for the festival was Free Spirit, owned and built by John Clarkson and one of the identical pair built in 2014, the last two sailing cobles to be built in the country.

Those five cobles joined the others that can regularly be seen moored in Bridlington harbour during the summer months: Gansey Lass, Gratitude, Imperialist, Madeleine Isabella and Three Brothers. In all, 10 sailing cobles took part in this year’s festival, the largest gathering in living memory. Sadly, Bethany of Bridlington, another locally based coble, was unavailable this year. 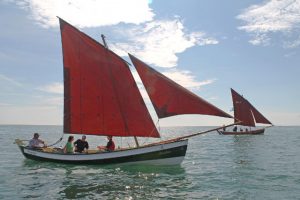 Christina and Madeleine Isabella sail on a near-parallel course.

The beautiful 26ft transom-sterned keelboat Granby, owned by John Landale and built in 1983 by the Elton Boatbuilding Company of Kirkcudbright, had steamed down from the Tyne and was moored on the north side of the harbour, together with Rose, a 14ft Tyne workboat built in the 1930s by RD Lambie of Davy Bank, and now owned by Derek Heelas.

Thea Jean, a locally based double-ender, was specially rigged with a sail for the weekend so as to be part of the growing festival fleet. The motor coble Harlequin, owned by William Moore, and the safety boat Gannet also joined the proceedings, and were available to assist if any problems occurred. All was set ready for the weekend, and with a good weather forecast, prospects were good for some great sailing. 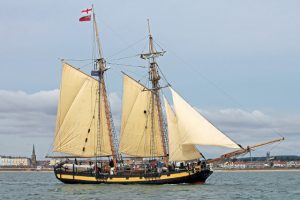 HMS Pickle looks well under sail as she joins the coble fleet.

The 73ft twin-masted topsail schooner HMS Pickle, an exact replica of the vessel selected by Vice Admiral Collingwood in 1805 to bring back to England news of the victory at Trafalgar and the death of Admiral Horatio Nelson, anchored just off the harbour on the Friday and would be part of the weekend’s events. She had left Hull marina the previous day, under the command of owner Mal Nicholson.

Due to high water at Bridlington being just after 10am on the Saturday, the festival got underway early. Spectators gathered at the harbour and on the North Pier with cameras to watch and record the cobles leaving for the first sailing session of the day. Very soon the whole fleet was setting a course in a northeasterly direction towards Flamborough Head. Some, being better trimmed than others, were soon passing South Landing and very nearly at the North Smithic buoy, before going about and setting a course back across the North Bay to the harbour. 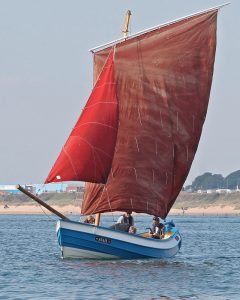 Avail, built in 1977 by Hector Handyside at the J & J Harrison’s yard at Amble, looking well with her new set of sails.

HMS Pickle had moved from her anchorage and was under full sail to meet the cobles running back. She looked resplendent and moved gracefully through the water, with cannons blasting to ‘bombard the harbour’ and draw attention from the gathered crowds on the North Pier. The cobles sailing alongside her presented a scene from days long ago, when brigs, barks and colliers would be waiting to berth in Bridlington harbour, and local cobles would be out to seek any work needed by their masters.

On returning to harbour, the cobles berthed alongside Harbour Road, and with just time for the crews to get a welcome coffee, it was an ideal opportunity for visitors to see the boats close at hand, and chat with skippers and crew members. 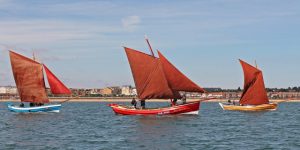 Jim Eldon, the ‘Brid Fiddler’, was keeping an audience entertained with his medley of folk and sea songs, at times performing from the small open boat Our Betsy. Due to the tide ebbing, it was not long before all the cobles were heading out of the harbour again on a course set across the bay towards the headland. An opportunity was organised for photographers afloat, and a film unit, to get shots of all the cobles sailing together, and this proved to be an amazing sight. 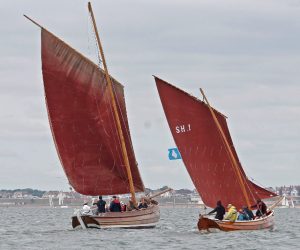 Three Brothers, built by Baker and Percy Siddall at Bridlington in 1912, and Madeleine Isabella, with mast bending, sailing at close quarters on course back to harbour.

As the cobles had to be back on their moorings before the north side of the harbour dried out, the activities of the first day drew to a close. Chatter among the crews was obviously about the sailing, and there was a chance to catch up with friends over a coffee or a well-earned pint. The first day had been fantastic – some excellent sailing and a huge success.

Sunday dawned a similar day weather-wise; the sea was like a mirror before a breeze picked up. With another day of some superb sailing in the offing, the crews lost no time in preparing their vessels to make the most of the final day. The cobles were quickly going through the piers to the open water again, and a course was set across the North Bay. Some fantastic images of two and three cobles sailing side by side at close quarters created a nostalgic scene, reminiscent of years ago when the coble fleet would be leaving for the fishing grounds. HMS Pickle came by the fleet under full sail, and with cannons blasting once again, she really did look the part of an English man o’ war. 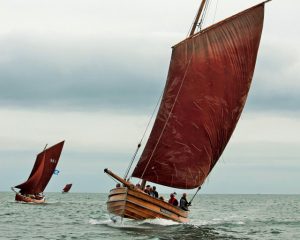 Back in around lunchtime, there was the presentation of brass plaques to each of the skippers, and that task was carried out by Ian Thompson, chairman of the Bridlington Sailing Coble Preservation Society. The Harbour Heritage Museum appeared to be doing a brisk trade, and so did the society stand near the boat hoist. The souvenir brochure proved popular, and coble enthusiasts were seen ticking off the vessels on show.

There was just time for one last sail before the tide receded, and to rendezvous again with those who had spent the whole weekend sailing together in the beautiful Bridlington Bay. The cobles returned to harbour in the early afternoon, and those staying needed to go onto their moorings before they dried out. Two of the cobles went across to the South Pier to be lifted out by crane, and back onto road trailers. Another two were prepared for being lifted out by the boat hoist early on Monday morning.

What a fantastic weekend it had been. The glorious weather played its part, but the gathering of so many cobles, along with dedicated coble people, was the making of this successful event and is why this annual festival is so popular.

Those who had attended for the first time were delighted with the experience, and had enjoyed it so much they were already talking about returning next year. It goes without saying that the festival certainly looks to be here to stay, and next year, hopefully, there may be a couple more cobles visiting for the first time. There are others being restored, and what better place to show them off than at Bridlington. 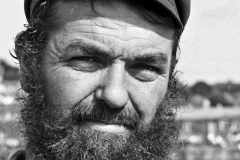 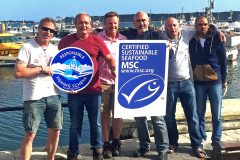