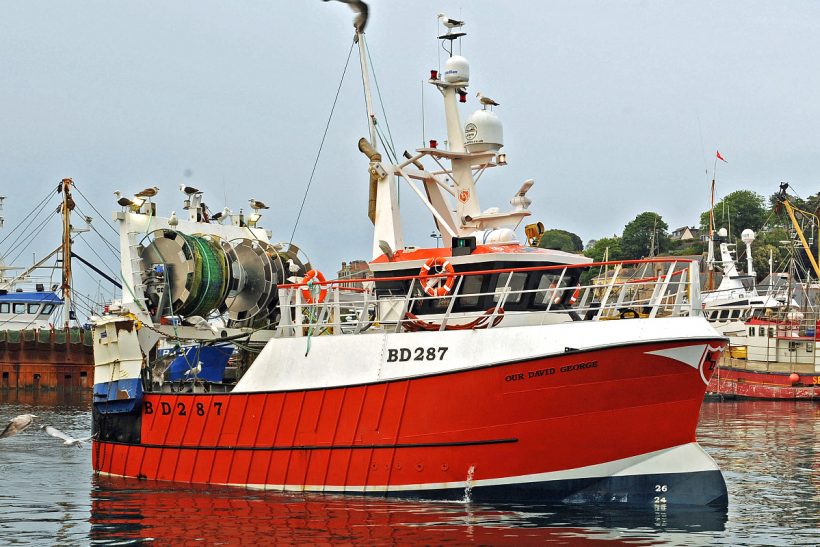 Brixham enjoyed a record-breaking 2017, with an annual catch value of £40m, 25% higher than the previous year’s record of £30.7m. Everyone connected with the South Devon port is looking forward to the traditional Brixham Trawler Race on Saturday, 16 June, as all sectors of the local industry at the UK’s leading port continue to benefit from the welcome combination of healthy stocks and high levels of consumer demand for top-quality seafood.

Exceptional landings of cuttlefish (Brixham’s ‘Black Gold’) by local and visiting vessels, together with consistently good prices on Brixham market, were the main reasons for such notable rises, achieved by the continuing efforts of the catching, marketing and processing sectors, which continue to strive for further improvements.

This constantly proactive approach and can-do attitude, which has stood Brixham in good stead in recent years, is expected to see the introduction of an electronic auction system in the form of a ‘Web Clock’ next year.

The mixed fleet of beam trawlers, scallopers and day haulers, which land a wide diversity of top-quality prime fish into a modern purpose-built fishmarket, ensure a consistent level of supplies that are eagerly sourced by discerning buyers and end consumers alike.

It is particularly pleasing to see that with respective catch value increases of 8%, 14% and 49%, the demersal, pelagic and shellfish sectors each made a strong contribution to the 2017 record. (See Table 1)

One of Brixham’s key strengths is the broad range of catches landed into the market, as shown by the fact that that nine species, cuttlefish, scallops, sole, monkfish, lemon sole, turbot, plaice, brill and squid, each contributed over £1m in terms of annual catch value last year. (See Table 2)

Brixham Trawler Agents Ltd (BTA) – auctioneers at Brixham fishmarket – topped £40 million in business at the turn of 2017 and hopes to match that figure for the turn of 2018. 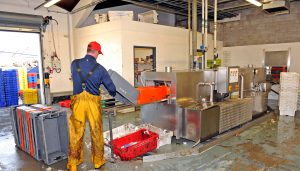 The present box-washing machine will soon be replaced by a new one made specifically for BTA.

Managing director of BTA, Barry Young, said: “By auctioning just over £40m-worth of fish and shellfish, in 2017 we had our best year ever. This was a massive achievement for a business of our size, operating in a port restricted by space.

“That result had a lot to do with the amount of cuttlefish landed, and, of course, the price, which rose to over £5/kg. Clearly there was a shortage of cuttlefish on the European market, and although there are theories as to why that shortage came about, no one is totally certain. The average price paid for cuttlefish climbed from £2.60/kg in the previous year, to an average of £4.60/kg in 2017. Long may that continue!

“The highest price that we saw was just over £5/kg. Due to the shortage of cuttlefish available to European buyers, the price has doubled, and our skippers have reaped considerable reward. The successful cuttlefish fishery has attracted other boats to turn to target cuttlefish. At the same time, those already equipped for the fishery have become more efficient. 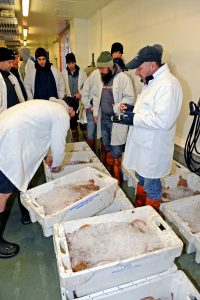 “For the remainder of 2018 we are aiming to match the previous year’s figures. In 2017, 4,324 tons of cuttlefish was landed to BTA, making around £20m. From present figures available, there is no reason why we cannot match £40m, but with the catching and marketing of any fish or shellfish, nothing is ever certain.”
South Devon, Dorset and East Cornwall’s cuttlefish season has begun. Small boats using cuttlefish traps are already landing to BTA, with auction prices of around £4.50/kg.

Barry Young said that other skippers looking to go trapping for cuttlefish should follow the method of many current skippers, and leave their gear in the water for quite some time after the cuttlefish leave, to allow the eggs laid on the traps to hatch.

To cope with the staining from cuttlefish ink, Brixham fishmarket has a separate auction hall and fridge area complete with bespoke handling equipment for that species.

Barry Young explained, “We needed a better consistency on the weighing of cuttlefish, and a new batching machine has given us that facility. The machine allows for better weighing of cuttlefish, and has been designed and manufactured by Marel to match our requirements. This is another of the ongoing improvements to the market business in Brixham.”

Known as the Cuttle Market, a large stock of fish boxes and ice bins has been added to other major investments by BTA to further promote the cuttlefish fishery. The firm plans to invest in a new box-washing conveyor machine, the present one being several years old.

Barry Young added, “The present box-washing machine cleans all boxes, including those from the main market and those from the cuttlefish market. Throughout its life, the machine has served us well, but we are now under discussion with manufacturers to build us another purpose-made machine. This will be underway soon and is yet another development that has been possible as a result of considerable grant support over recent years.

“As a port we lean heavily on the cuttlefish trade, and hope that the shortage of cuttlefish, that has affected other areas of the EU but benefited our fishermen, doesn’t happen on our side of the Channel. Nothing is certain but from the small amounts presently being landed by the trapping boats, when compared to the catches landed at this time in 2017, the quantities are similar.

“Dover sole is still a very important catch to Brixham and skippers continue to be careful to manage the fishing for that species, using better and cleaner-fishing gear to allow small sole to escape easier. 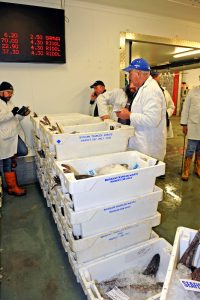 Buyer Mark Owen (in the blue cap) from David Walker and Son fish merchants, bidding for Cornish hake. Auctioneer John Rogers is on the left.

They also work hard to cut down on discards of other species. As a consequence, fishing is now more efficient, and with reduced landings of the smaller sizes the prices are kept high – so there is some payback to the stringent quota restrictions that our boats have suffered for far too many years.

“Our figures don’t show a marked drop in any species, and scientists admit that the Channel stocks are healthy. Just look at 20 years ago, when there were at least 40 beam-trawlers working from Brixham. Now there are as few as 20 boats, albeit that the boats are more efficient; there is still far less effort on the Channel than there was in the late 1990s. Fishermen have adapted to other opportunities like the non-pressure stock of cuttlefish, and proof of that is in BTA’s figures, which have risen from £20m a year, to a turnover of £40m in 2017.

“Some of that growth is due to visiting boats and some because we take fish from a wider area. Fish like hake from a few boats at Newlyn, together with multiple species of fish collected from boats right up the east Channel, have also made a contribution to the successful period. But the largest impact on the increase is due to West Country skippers being more efficient, irrespective of what fishery they tackle.

“We have a good relationship with our fellow auctioneers at Newlyn and take small amounts of hake from several Newlyn boats. This benefits both parties as we stagger the amounts we take to keep the price as steady as possible, and stick to selling around 150 boxes a day, but always looking to increase that week on week.” 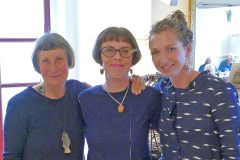 ‘Guardians of the Reef’ 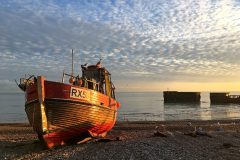