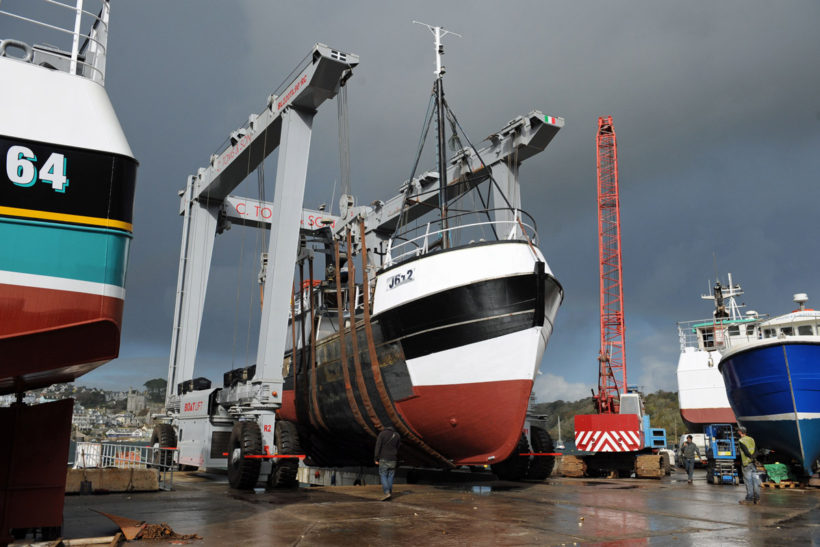 Builds at all stages at Toms’ yard

“The yard is quite busy, but not busy enough,” says Paul Toms, manager of Cornish boatyard C Toms & Son. 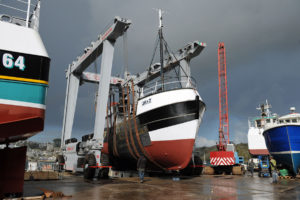 The 1969-built wooden vessel La Vagabonde des Mers was out of the water at C Toms & Son recently, alongside the new-build Isabelle. 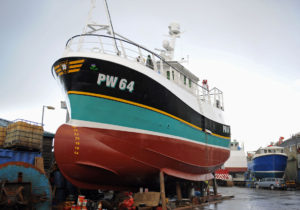 Isabelle, almost ready for launch, has been painted to match the Trevose of Newquay, and has also inherited its registration PW 64. 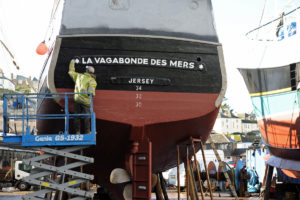 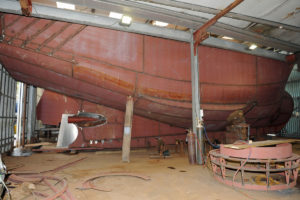 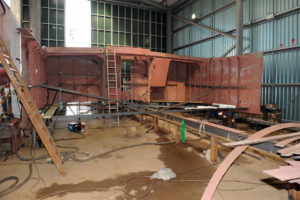 … while construction of its shelterdeck is underway.

“On new builds, many are seeing what Brexit will deliver, and some are holding back on placing a contract. Being able to take on non-British crewmen from places like the Philippines is also a factor, because so many of the UK boats now depend upon non-British crewmen. There is a shortage of UK skippers, so that too is an issue. But fishing is a very good investment, and there are people who want to further invest in fishing. Over the past few years, a steady run of orders for steel vessels at this yard is proof of that.

“As soon as Brexit is sorted out, I am sure that potential buyers will be more confident to invest in new boats. We’ve been contacted by a couple of such buyers, but as yet no orders are placed, so we have space in the yard to lay a keel, and would welcome any discussion with those who may be interested.”

Currently under build at the yard is a 19m twin-rig trawler to be named Loch Inchard II, ordered by Scottish fisherman Ian Mackay of the Loch Inchard Fishing Company Ltd in Lairg, Sutherland. “Progress of the build is good,” said Paul Toms. “We are a little ahead of schedule. We’ve had the chance to make up for lost time from the last Covid-19 lockdown, and hopefully we will remain in operation throughout the latest lockdown.”

The hull is now complete, and alongside it is the shelterdeck, which is in the final stages of construction. The Loch Inchard II will be powered by a Baudouin main engine, driven through a Reintjes gearbox. Two gensets are already installed, one supplied by Baudouin and the other by Watermota Ltd in Devon. The stern gear, propeller, nozzle and a triple rudder system will be supplied by Kort Propulsion. Steering will be supplied by Wills Ridley.

Paul Toms said: “The boat is looking really good, with stylish lines from the designer Marine Design International Ltd, based at Glasgow. It is the largest fishing boat ever built here at C Toms & Son, although we have built several bigger steel vessels as workboats.

“A 15m vivier-crabber for Les Burt, the Isabelle PW 64, is due for launch shortly, and a similar 15m potter is under build for Camel Fish in North Cornwall. Its keel was recently laid. It will be identical to the last one we manufactured for Camel Fish and skipper James Dunn, a boat named the Amber Mabel PW 21, the final fit-out of which was done at Wadebridge near its home port of Padstow. That boat is now working.

“Also on schedule is the next completion, a U10 trawler for R&B Fishing of Lowestoft, one identical to the Saxon Spirit that we built for the firm two years ago. That style, designed by Ian Paton of SC McAllister & Co Ltd, is becoming a popular choice for skippers who want to stay in the under-10m sector.”

Paul Toms confirmed that a steady throughput of work on refits and repairs is keeping the firm’s slipways and hoist busy. Recent work has included the well-known wooden vivier boat La Vagabonde des Mers J 612, which was built at the Breton port of Camaret-sur-Mer in 1969.

Staff at C Toms & Son carried out routine refit duties, drawing out the shaft for inspection and maintenance. The engineroom and vivier pumping system were also checked.

Staff from the Brixham company run by Bobby Cann, specialists in the build and maintenance of wooden boats, then carried out further work on the vessel. Bobby Cann explained: “We have done work on the La Vagabonde des Mers for many years. A standard refit was carried out by Andy Savage, together with Allister Moss and our new apprentice Lewis Houkey.”

C Toms & Sons’ resident marine painting company, headed by Steve Green, carried out a standard paint contract on the La Vagabonde des Mers. Steve’s firm undertakes most painting contracts at the yard, and one of the latest is an example of the quality of their workmanship. Les Burt, owner of the new-build Isabelle, presented them with a challenge, asking for the colour scheme and paintwork to resemble that of the Burt family’s 13m boat Trevose of Newquay, which was launched in 1986. All who know the Trevose of Newquay have commented that the result from Steve Green and his staff is a perfect match.

Paul Toms predicts that in order to meet forthcoming regulations on issues such as engine emissions, ‘an extra £50,000 to £60,000 may be added to the price of a new build at any yard in the UK’.

He added that if contracts are signed this year, a vessel owner might avoid such costs. “As yet, we haven’t got exact definition of the rulings, but there is no question that stringent rules on vessel construction are coming in. In the case of engine emissions, a totally new exhaust system may be required.

“Yes, we are concerned. We understand that these further stringent rules might begin in January next year. However, as far as we understand, if a contract is signed prior to the close of 2020, such regulations may not apply.

“We have received some guidance from the MCA. In terms of the added cost to those wanting to invest in a new boat, we are not yet totally clear – but for those placing orders after 31 December, it may bring an increase in the total cost of a new build.” 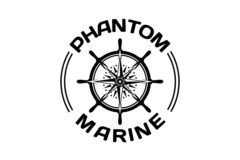 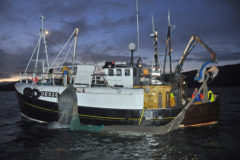