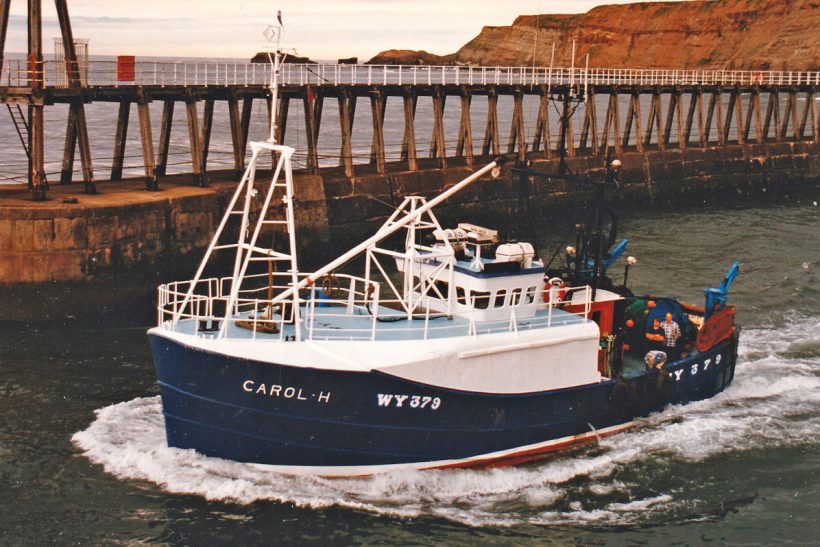 In the final part of a mini-series on the major role that North Sea cod played in the lives of generations of fishermen on the Yorkshire coast, David Linkie looks back on a 48-hour trip on the Whitby trawler Carol H WY 379 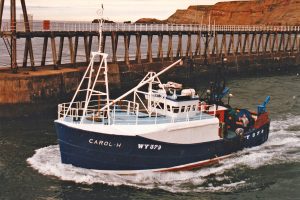 Carol H heads out between the Whitby pier-ends at the beginning of a trip fishing the local inshore hard ground.

Within an hour of sailing from Whitby on a Sunday night in August 1997, Carol H settled into her first tow of the week, in 29 fathoms six miles north of Whitby.

The hard ground that extends seaward up to 20 miles from Whitby consistently yielded good quality codstuffs – although it required local knowledge to be fished effectively and without too much gear lost on what could be very unforgiving bottom, especially closer inshore.

The 62ft steel-hulled Carol H was Peter Hansell’s fourth boat as skipper. He started in 1983 with the 48ft Scoresby WY 12, followed by eight years with the 54ft Radiant Morn FR 141, before changing tack and buying the 40ft beamer Rebecca Elaine.

When the local grounds proved too hard for beam trawling, he decided to buy Ocean Herald II LH 25 from fellow Whitby skipper Tal Bennison, who had bought the seiner/trawler from Eyemouth in 1995, two years previously.

Ocean Herald II KY 197 was built by James N Miller & Sons in 1975 as a seine-netter for Pittenweem skipper John McBain.

After crossing the Firth of Forth to fish from Eyemouth for 10 years after being bought by skipper Robert Ritchie, Ocean Herald moved to Whitby, by which time the boat was rigged solely for trawling. 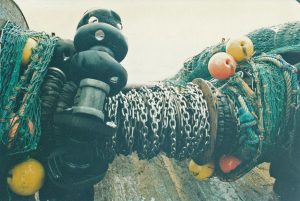 Hauling the mandatory heavy rockhopper-rigged trawl onto the net drum.

By buying a larger class of trawler, Peter Hansell joined a growing number of Whitby skippers who, by the time of this trip, had bought bigger vessels or modernised in order to have versatile trawlers suitable for either fishing inshore or working the pipelines offshore.

Of the 14 locally owned Whitby trawlers, half regularly fished trips of six days or more around the oil rigs between 150 and 220 miles from Whitby.

While boats had encountered some good fishing in this area early in the year, it had become much slacker in recent months, which skippers thought was due to a seasonal variation rather than any shortage of fish.

The general feeling was that stocks were in fact healthy, with promising signs of mature fish joining the stocks on a regular basis.

During the first tow, Peter Hansell was encouraged by quantities of larger sandeels seen in the decklights, swimming near the surface at night. 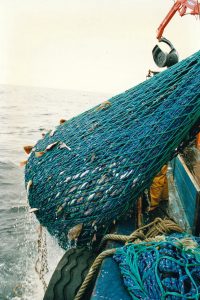 Taking a bag of fish…

Just after midnight following a four-hour tow, Carol H’s four crewmen were called so that the warps could be heaved up and the doors chained to the gallows, before the codend was lifted aboard to reveal three kits of green. Although nothing to shout about compared to the occasional better bag that could be taken when the cod were chasing the same feed as the herring in late August, Carol H was up and running.

Carol H was towing a three-panel box trawl with 600 x 5.35in meshes in the fishing circle, measuring 84ft on the fishing line and rigged on 60ft of heavy-rigged 16in and 14in hoppers.

Towed by 20mm-diameter warps, the single trawl was spread by a set of 7ft Poly-Ice doors and five fathoms of chain bridles.

With conservation and the importance of protecting future catches firmly etched in their minds, Whitby skippers were proactively taking steps to protect the stocks on the grounds, by working mesh sizes of between 107mm and 109mm in their codends, rather than the required 100mm, in order to allow immature fish to escape.

The benefits of doing so were highlighted by the fact that over the course of a dozen hauls by Carol H, on average less than 1% of the weight of fish was discarded from each tow, indicating the class of fish on the grounds.

With the gear shot away again and the warps chained after 90 fathoms had been run off the drums, the crew started to release the catch from the hopper onto the sorting table, from where it was quickly gutted, graded and placed in the fish washer before being lowered into the hold. 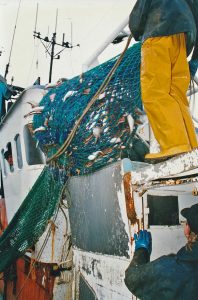 Care of the catch was evident throughout, but nowhere more so than in the fish hold, where Richard Clarkson took pride in grading, icing and filling the seven-stone boxes, with no evidence of crushing caused by overfilling.

Whitby fishmarket had a longstanding reputation for selling top-quality fish, and it was apparent that the crews were doing their best to boost this standard. With codstuffs usually representing at least 80% of her catch, Carol H landed eight grades of green including best sprag, sprag, best, medium, best small, ordinary small and tids. Five grades of haddock were also selected when appropriate.

Towed north before the ebb tide and then off into the eastward, the second tow yielded four kits, again a good class of fish. Before the third started well after dawn, skipper Peter Hansell asked the crew to fit a tickler chain to the sweeps, as he intended continuing east onto slightly better ground, where a lifting chain can be used safely.

During spring tides the previous week, boats had experienced the best fishing for several months, but with falling tides, when codling tend to lie more dormant on the seabed, prospects for the rest of the trip were viewed as mediocre. 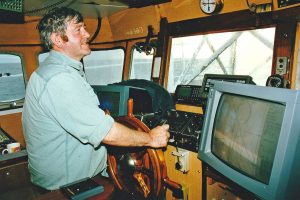 During the third haul, some promising marks of feed were indicated on the Koden CVS 8831 sounder, while the gear continued to bounce over some catchy ground at three knots, with the tickler chain being eased clear once or twice with a few extra revs.

On hauling, the codend revealed a better sign of bulk, which subsequently proved to be 11 kit of quality sprags.

The next five four-hour tows in the same area, proceeding into the early hours of Tuesday, went smoothly, with better than average fishing yielding hauls of similar quality. 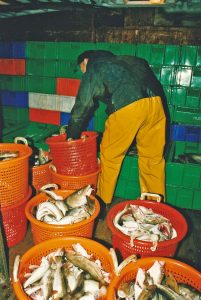 Although Monday had been a fine day inshore, there had been a stiff northeasterly breeze further off, and by Tuesday morning a groundswell appeared to be making. As always, this was viewed as bad news when fishing inshore in shallower water, when the fish can be knocked off very quickly.

Fortunately, the breeze of wind that had sprung up fell away again, and with it the sea, although its short presence did appear to have had a detrimental effect on catch rates, as the sizes of bags started to drop to three and four kit.

This situation was not helped when the tickler chain came fast towing before the tide and the codend tripped through the gear while hauling – although the possibility of losing fish was quickly averted.

The following haul also proved problematic, and resulted in a single-ended tow, with the starboard sweep chain parting, although fortunately there was no damage to the gear, and the resulting three kits were looked on as a bonus rather than a failure.

When fishing inshore, Whitby skippers normally made a midweek landing, picking their moment to hit a potentially stronger market.

The 7.30am market at Whitby, where sales were conducted by either Whitby Alliance or Whitby United, usually handled up to 350 kits, so skippers tried to avoid landing all together in order to ensure consistent supply and demand.

Several boats working offshore at the pipes, and those that had fished the weekend inshore, had landed to a well-supplied Tuesday market, where prices had been very flat, averaging less than £5.50 a stone. 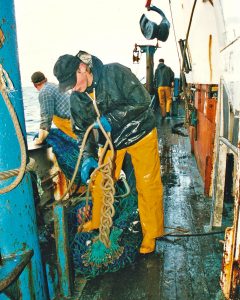 Retying the codline ready to shoot away again.

Skipper Peter Hansell decided to land for the Wednesday market, in the hope that prices would be a little stronger in view of the expected reduced supplies.

First boat up on a smaller 150-kit market, Carol H secured marginally stronger prices for a 75-kit shot, which comprised 80% green, with a few kits each of lemons, haddocks, whiting and monkfish.

After quickly checking over his trawl, skipper Peter Hansell and his crew headed back out for another 60-hour stint on the local grounds, which resulted in a further 50 kits and £3,400 to complete a better than average week – before the whole process started again.

Given the viable levels of fishing that prevailed at this time, few – if any – could have predicted that within just a few years, the previously hardworking Whitby trawler fleet would be decimated to the point of extinction, and that trawling on the inshore grounds would join the rapidly growing list of local fisheries consigned to history.

Today, virtually the only cod brought ashore at Whitby is caught by anglers taking day-trips on local charter boats.

After being converted to netting, Carol H, skippered by Phil Mitchell, fished from Newlyn for eight years, during which time the boat was bought by Waterdance Ltd.

In 2010, Carol H was replaced by the 22.6m wooden-hulled Govenek of Ladram PZ 51, after Macduff Shipyards converted the twin-rig trawler Regent Bird III BCK 110, built at Macduff in 1986 as Fruitful Bough PD 109, for a new role as a modern gill-netter. 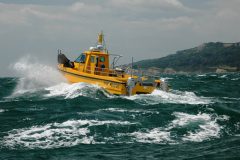