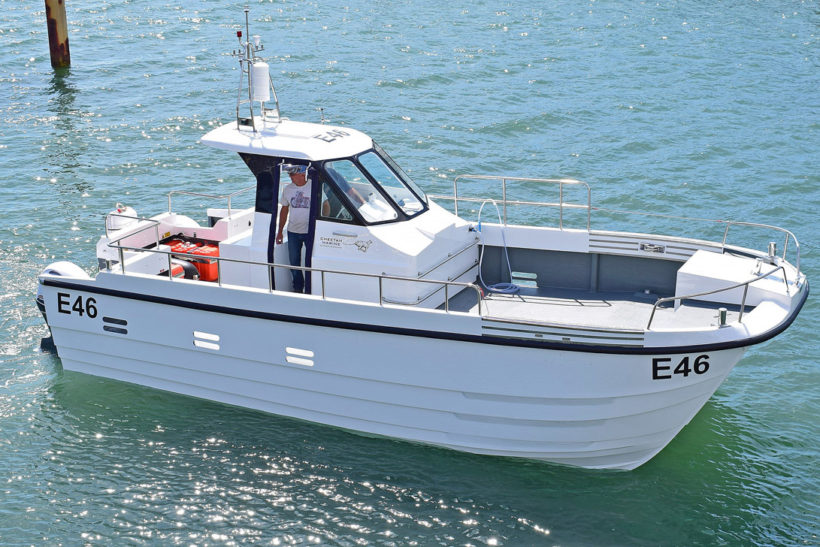 The challenges of 2020 look set to continue through 2021, but this has not deterred Cheetah Marine International Ltd, which now has a foot in both the UK and the EU, reports John Periam

Cheetah’s yards in both the UK and Portugal are busy building new fishing vessels, with good order books for 2021. With the company’s ability to design and build commercial fishing boats to specific customer requirements, some good-looking vessels are coming off the production lines in both yards. 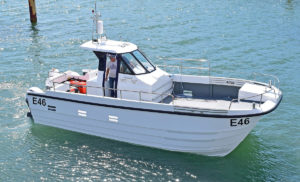 E 46 is a 9.2m x 3.7m model with a walkaround aft cabin built for the UK south coast. Popular in the South of France for netting, this model is usually built in Cheetah’s Nazaré factory to Bureau Veritas. 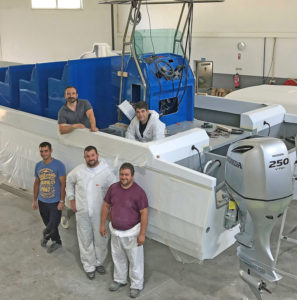 For the local Portuguese market, Cheetah is building designs suited to purposes from dolphin watching to sport diving. This boat, with an aft centre console and forward tiered seating, is coded for 20 people and cruises at 25 knots with low rpm and low fuel consumption. 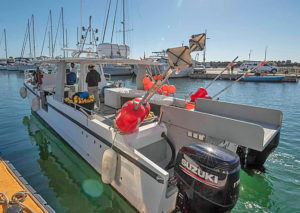 A French Cheetah heads out into the Bay of Marseille with a typical fleet of nets. 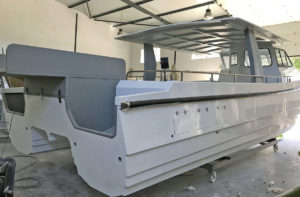 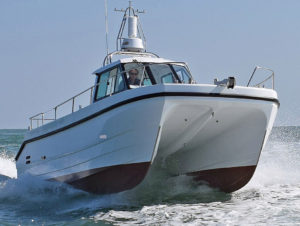 Cheetah’s new 8.9m x 3.4m model is proving to be a popular addition to the range. It has a good carrying capacity and runs well in heavy seas. 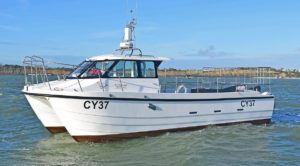 Cheetah founder Sean Strevens said: “Brexit and Covid have unfortunately caused increased material and equipment costs, also resulting in supply chain delays. More paperwork caused by Brexit will also have an effect. It is hoped that once this is better organised, it should hopefully be minimal.

“The trade deal should be helping with the importing and exporting of parts and equipment. However, at the moment it seems like there is effectively no deal, as the complications are considerable.”

Sean looked into the implications of Brexit in detail, and felt that a production plant in Europe might well be a good investment. He therefore decided, in late 2017, to open a Cheetah manufacturing facility in Nazaré, Portugal. Within the first two years, he has seen his Cheetahs working along the Portuguese coastline, with increasing sales into other European countries.

Builds of the new 4.3m beam Cheetah are progressing well in Portugal, with three already on order, including two French commercial fishing vessels built under Bureau Veritas. The 9.2m x 3.7m model with a walkaround offset aft cabin is popular in the South of France for netting, and a vessel of this model – E 46 – is now in use on the south coast of the UK.

The majority of Cheetah’s 9.98m x 3.7m range of commercial boats are being fitted with side gunwale rollers and stern shoots, a trend that has steadily been increasing over the past few years.

CY 37, a 9.98m x 3.7m model, is headed for Scotland, with self-shooting, side gunwale rollers and second-station steering. The second-station gear and throttle are easily achieved with the Selva 100 XS 2.8-litre’s electronic-controlled motors. This particular boat is fitted with Reliance 13.5in x 14in stainless steel propellers and cruises at 17 knots at 3,300rpm, with a top speed on trials of 23 knots at 4,300rpm.

Hauling equipment is a Spencer Carter system, with the power pack fitted on the port side forward. The gunwale roller is from Solent Engineering, and the second station is fitted with Hydrive hydraulic steering and Selva electronic dual top-mounted controls. The winch is controlled by Spencer Carter’s rotary control valve. A nice extra touch is in the wheelhouse, with inside seating and a table on the port side.

A new 9.98m x 3.7m vessel, currently being launched for sea trials, has a Seawinch power pack using the 20hp Honda motor, and a side gunwale roller and sheave with a forward vertical roller. This was all supplied as a package from Seawinch.

Also currently popular is Cheetah’s new 6.9m x 2.7m model. This is particularly suitable for bass fishing, and runs well with power as low as the Selva Spearfish 30XS. This engine runs at low rpm, but with high torque is capable of swinging a good-sized propeller, which is both fuel-efficient and under-stressed, making it ideal for commercial fishermen, with lower emissions, lower fuel consumption and good reliability.

The 8.5m x 3m windscreen Cheetah is popular in Portugal for bass fishing close to the cliffs on the Atlantic west coast.

Exhibiting at boat shows in Europe has been a wise move for Cheetah, and by having a European base, the company is well placed to continue to develop its European market. The renowned seakeeping abilities of Cheetahs mean they are well suited to the rugged European Atlantic coast and its small-vessel artisanal fisheries.

The Portuguese generally eat very healthily, and are very keen on their fresh fish, says Sean. The political emphasis in Portugal is on small, sustainable coastal fishing boats, where a large percentage of the catch goes to local restaurants, hotels and domestic consumers.

However, Cheetah retains strong links to Ventnor on the Isle of Wight, which is where it all started 30 years ago, with Sean developing his first 6.2m catamaran on his father Keith’s farm at Bonchurch. Today over 550 Cheetahs have been sold, and the company has several production units around Ventnor in addition to the new one in Portugal.

Cheetah has always had a strong commitment to safety in its designs. Sean’s first Cheetah was designed specifically to address many of the limitations of a small monohull when it comes to fishing safely in strong tides and rough weather.

Sean said: “There are still issues for us with the safety of the MCA construction standards, which hopefully will be rectified.

“We have submitted an extensive document to the MCA explaining our specific safety concerns in the construction standards. Hopefully these issues will be taken into consideration and acted upon very soon.”

Sales are good – often with repeat orders when fishermen wish to increase vessel size or extend their fleet of Cheetahs. Many areas around the UK coastline fit the Cheetah mould well, including West Wales, Scotland, Cornwall and the east coast.

Sean said: “We will have a fully electric Cheetah soon, with a capability of green energy recharging, which is an exciting development, helped by our experience when we built a hydrogen-powered Cheetah and went successfully round the Isle of Wight with zero emissions. We think that electric with a hydrogen fuel cell for a range extender will play an important part in the decarbonisation of the marine sector.”

Cheetah also realises the importance of working with suppliers of quality equipment. One such company is Solent Engineering, run by David and Lucy Middleton for the past 23 years and based at Birdham near Chichester, where they make a range of stainless steel products including net and pot haulers and railings.

David said: “We have worked alongside Cheetah for many years now, and they are such a professional organisation. We know that when a particular product is required from us, the specifications will be correct to meet the design of that specific order. Being able to have the Cheetah delivered to our yard so we can fit out here is an added bonus.”

Cheetah is continuously adding to its design series, taking into consideration the performance of outboards, which work very well with all the Cheetah designs. Sean works in tandem with outboard manufacturers, with a keen awareness of current environmental needs. The next couple of years will see some positive developments in this direction, he says.

Sean said: “I think the future for small sustainable commercial fishing boats around the coast of the UK is a good one – once we are over the Covid-19 and Brexit issues. People in general will want to eat more healthily and from a more sustainable source, which suits the small inshore sustainable fishing fleets.” 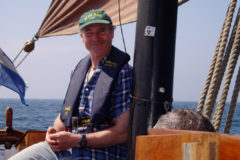 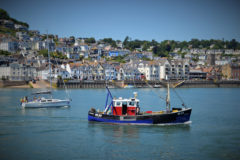