Like most businesses, catamaran builder Cheetah Marine, based at Ventnor on the Isle of Wight, decided to stop production in late March so its staff could stay safe – but it is now back in production with Covid-19 precautions in place, reports John Periam.

One advantage the company has is that it has several separate premises in Ventnor, which has enabled it to have small teams working in each. 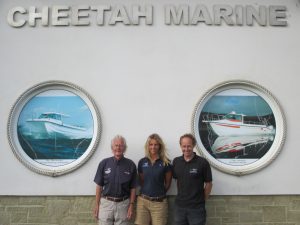 Keith, Lucy and Sean Strevens at Ventnor – Cheetah is still very much a family business, supported by dedicated staff.

Cheetah designer Sean Strevens said: “We are pleased to say this has worked well. After four weeks of home isolation, the guys were keen to get back to work.” Sean has a dedicated and loyal staff of over 35, including some who have worked with him for many years.

The company makes many of its own vessel fittings such as railings, trying to keep as much as possible in house so it can monitor the build quality. It also works with several well-known nearby mainland manufacturers, who supply some of the deck fittings, and if a fisherman wants something specific, like a winch, for his new build, Sean will source that.

Cheetah has long been a respected name in UK inshore fishing communities. Sean started his career as a fisherman at Ventnor, and found that the existing design of boats was not suitable for working from the beach, due to the tides and the pebble surface. On his father Keith’s small farm at Bonchurch, 29 years ago, he started to design a suitable vessel, making his first 6.2m Cheetah catamaran. The rest is history, and to date, over 500 Cheetahs have been sold. 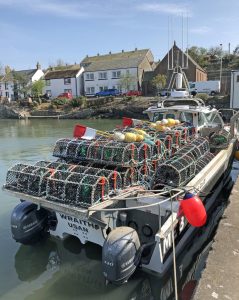 Cheetah is still very much a family business, with Sean’s wife Lucy involved in the marketing and his dad Keith managing the Ventnor offices. It has also expanded overseas, and has a production plant in Nazaré on the Atlantic west coast of Portugal.

The Cheetah design has also given the company the opportunity to expand production into other fields such as patrol boats, police boats and harbour workboats, and Sean Strevens has been honoured with an invitation to become a member of the Royal Institution of Naval Architects.

Safety, structural integrity and efficiency remain the core components of Sean’s designs, and sustainability and low environmental impact are increasingly important factors. Sean maintains that the right small inshore catamaran, with a mix of fishing gear and an efficient hull shape, can make a living for a fisherman that is both sustainable and rewarding.

“Over the last 10 years, licence costs and legislation have not been kind to the small sustainable vessels, but going forward, the current crisis will help to show that our small inshore fleet is an important and unique industry that must be looked after.

“With the MCA taking over new vessel construction standards from Seafish, we are looking forward to a smooth transition, and an understanding of how important it is to have a good relationship between fishermen, boatbuilders and the certifying authority within the small inshore commercial fishing sector.”

Sean and his team are very much aware of the widely differing needs of fishermen around our UK coastlines. He works closely with customers from day one and is in touch throughout each build. Listening to fishermen and what they need is integral to each day’s work at Cheetah. 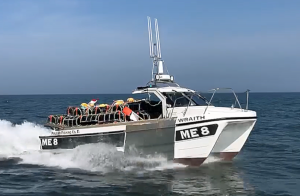 A fully loaded Wraith cruising at speed. She handles well in all weathers, which was a priority for Kevin Pullar.

“We are continuously adding to our design series, and our latest new build model is an 8.9m x 3.35m, which is already proving to be working very well. This has a high carrying capacity and can take a variety of outboard engine powers. I have always had an interest in the working performance of outboards, and they work well with Cheetahs. Larger engines are being developed that take current environmental needs into consideration, and we work closely with their manufacturers.”

The first of the new design went to Kevin Pullar of the Pullar Fishing Company. The Pullars – a family of fishermen who catch a variety of shellfish from their base in Montrose in the northeast of Scotland – have a fleet of Cheetah catamarans, all powered by Yamaha outboards.

Kevin Pullar, who has been fishing his whole life, said: “I have done well over 1,000 hours on the new Cheetah, and it’s a very able craft. The fine bow lines give it a very good ride and great carrying capacity. Obviously it is not as good at carrying weight as our 3.7, but possibly not too different from the 3.6, due to extra freeboard. Twin 130s cruising to 18 knots average 35 litres per hour. The top speed is around 26 knots. It seems to be very good in a poor sea, and we are very happy indeed with the hull characteristics.” 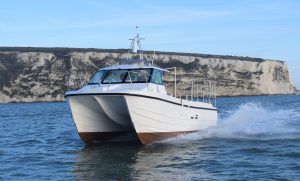 Another Scottish customer is Robert Wallace from Banff, a fisherman of some 45 years’ standing who bought his first Cheetah back in 2004. Robert has worked his way through the Cheetah series, starting with a part-build 6.9m back in 2004, Piscatio. He has just taken delivery of his fifth Piscatio, a 9.98m x 3.7m.

Robert is based in the Moray Firth, and is also a pelagic fisherman. His succession of Cheetah catamarans have been used for creeling and mackerel hand-lining in between the offshore pelagic seasons. Since ordering the original Piscatio, Robert has upgraded through the 6.9m, 7.9m, 8.5m and 9.4m series, completing some of the fit-out each time, working the Cheetah and then selling it on to buy the next size up.

Robert said: “I didn’t buy the boats with the view of upgrading, but on seeing the good resale value of the Cheetahs, I was tempted to try and sell the first 6.9m. I had no problems in doing this, and in fact could have sold it a few times over. Cheetah is a respected name in the industry. I had the same experience with the rest. There is no doubt that Cheetahs are great boats built by a good company with an excellent reputation for first-class vessels.” 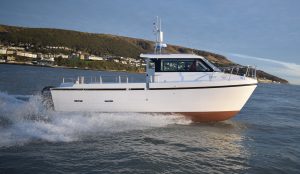 Cheetah completed the fit-out on Robert’s latest boat, and fitted the gunwale roller and potting table. The power pack, slave hauler and roller were supplied by Seawinch, which designed them specifically to fit the layout.

Robert said: “I am delighted with the boat. The layout works very well, and the Cheetah is perfect for catching a mix of brown crab, lobster and mackerel. The twin 100hp Selva engines give 21 knots at 4,200rpm and 16 knots at 3,300rpm, using 30 litres an hour for both engines.”

The third in the trio of Scottish orders was for William Polson of Shetland, who has recently taken delivery of a long wheelhouse version of the new 8.9m x 3.35m Cheetah. This is set up for jigging with DNG jigging machines to fish for pollack, mackerel and cod. Twin Mercury SeaPro 90hp extra-long-shaft outboard engines, running from twin 150-litre under-deck tanks, give this boat a long range and high stability for the rough weather off Shetland. It has a top speed of 25 knots at 4,500rpm and a cruise speed of 18 knots at 3,400rpm.

Also fitted is a deck box for the Honda 2kVA generator, which will run the jigging machines and a battery charger if needed.

Cheetah currently has a busy order book, both for the UK and for Europe. It was Scottish fishermen who showed early interest in its vessels; further orders then followed from Wales, Cornwall and the east coast. Many are repeat orders from satisfied previous customers. 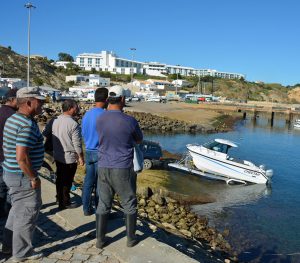 Cheetah’s production plant in Portugal has led to a new market for local sales.

The expansion of the company to Portugal was a wise move. Sean noticed that fishermen there mostly work from exposed harbours, for which the Cheetah design is ideal. The boats handle well in rough seas, and their hull designs incorporate built-in safety features.

Having a fisherman at the helm of the company is key – first-hand experience is what it is all about. “I take every day as a learning curve, and make a concerted effort to take onboard fishermen’s comments relating to the design of our range of vessels,” said Sean.

“This year has not been a good one for fishermen. We had a terrible winter, and many fishermen did not get to sea for weeks – or should I say months. Then, just as things started to get better, Covid-19 hit us all with a vengeance. The rest is history, and every day seemed to provide yet another problem for our fishermen to deal with.

“However, out of bad sometimes there comes some good, and I am seeing signs of this in the way our inshore fleets now operate. Households are now starting to appreciate a good supply of fresh seafood – something they did not have before unless they went to a fishmonger. Selling direct is starting to have its advantages, which will help our fishermen a lot. A similar shift is happening countrywide, as eating and shopping habits change. If this carries on, I can see some people reassessing their current lifestyles. With a new keenness to keep fit and eat well, I hope that the local consumer market will become important again, as it was when I first started commercial fishing in the late 1970s.

“Many Cheetahs are operated by single-handed fishermen, and I have a feeling some will look again at the way they operate. Some may well return to selling direct to the public and other establishments. I am hearing a lot of very positive comments from fishermen about this. It also helps to educate communities by bringing to the fore the way our fishermen work, and the hardships they suffer at times.

“Fishing is what Cheetah is all about, and it will remain top of our list. I just want to be around to see some of our younger generation wanting to follow in their fathers’ footsteps once again – traditions are important, and sadly some have gone by the wayside. Rest assured, we at Cheetah will be there to help in as many ways as possible.” 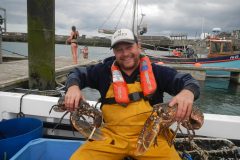 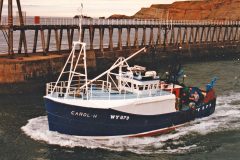