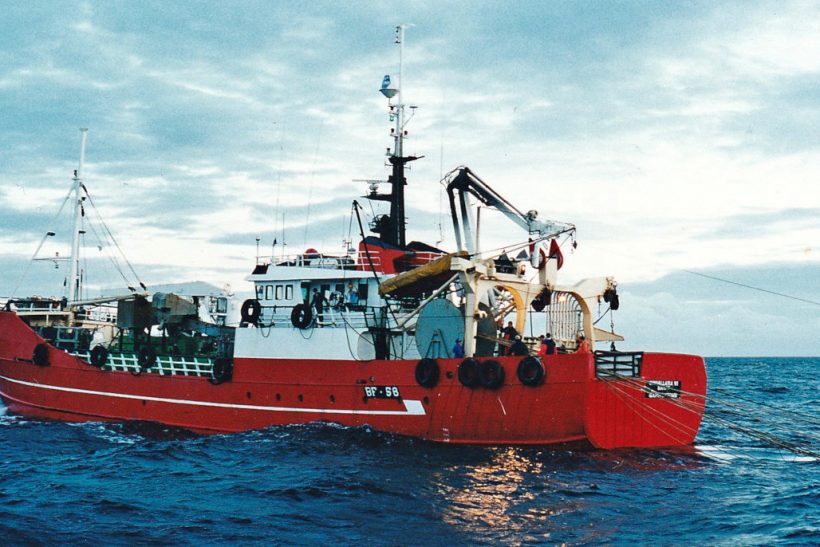 Pair-trawling for herring off Rattray Head

In a week in which the first herring of 2020 were landed at Peterhead, David Linkie looks back on a quick-fire trip on the Fraserburgh pelagic boat Daystar BF 250, pair-trawling for herring with Convallaria VI BF 58 off the Buchan coast 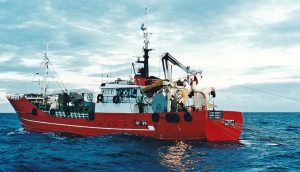 Shortly after midnight on a Sunday night in August 1999, skipper Zander West Jnr manoeuvred the 49m Daystar out of the modernised deepwater Balaclava basin and into the main channel, where he joined a fleet of 50 boats, mainly twin-rig prawn trawlers, heading out of Fraserburgh.

There had been reports over the weekend of some shots of large herring, counting 105 to the 25kg basket, being taken down at Foula, Eshaness and Fair Isle, so most of the pelagic boats headed north.

Daystar’s pair-trawling partner Convallaria VI (ex Andrea Tait), however, had an all-important market slot for the following day at Peterhead. So the pair-team headed for the Bulger Head grounds, just 12 miles east of Rattray Head, where large marks of good-quality although slightly smaller fish had been found the previous week.

This was in line with the observation that more herring had been seen on the inshore grounds that year than for many years. At a time when skippers generally were reporting a good spread of fish on the east and west coast grounds, this indicated that the stocks were in a very healthy state – despite the scientists’ repeated demands for reduced TACs. 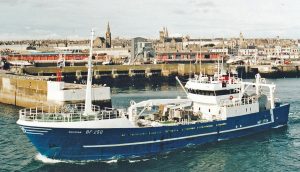 Following the recent demise of the Eastern European klondyke fleet, which had been an integral part of the pelagic sector for nearly 30 years, the Scottish fleet was now totally dependent on shore markets.

EU cold stores were reported to be full of herring, many of which had come from the lower-quality Atlanto-Scanto stocks heavily fished by Norwegian vessels.

As a consequence, shore-based demand at Fraserburgh, Peterhead and Lerwick, from such firms as Fresh Catch, Scottish Fishermen’s Harvest, Alex Buchan and Shetland Catch, remained slack, with depressed prices seldom exceeding £100/t – although roe fish for the Japanese market had been making up to £125/t for top-quality fish. Even the larger boats tripping to Norway and Denmark were receiving no more than £125.

As Alex West, chairman of the Scottish Pelagic Fishermen’s Association and Daystar owner, later pointed out, boats had been receiving £100/t for their herring 20 years previously, and the current prices were ‘a giveaway’. 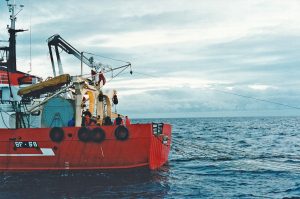 Crew on Convallaria VI wait for Daystar to go alongside to pick up the port sweeps after shooting the midwater trawl.

On starting to search, it was not long before the Kaijo Denki KCS 220 super scanning sonar was showing promising marks. As dawn broke, John Ritchie, skipper of the Convallaria VI a couple of miles to the southeast, reported that he had called the crew to shoot the net. This was a relatively small herring pair-trawl, measuring 720 fathoms in the fishing circle, with 14.4m meshes in the wing ends and 7.2m meshes in the bottom of the net.

The two skippers skilfully brought the two 160ft trawlers alongside, allowing the crew of Convallaria VI to pass over the port side footrope and headline 25-fathom sweeps to Daystar’s crew. They quickly clipped them onto their wires and the 2t toe-end chain clump weight, before the boats eased ahead to run off 125 fathoms of wire, with the gear settling in 46 fathoms.

The boats towed north 0.15 miles apart at four knots, and the hunt was on. The mood in the wheelhouse was one of relaxed but intense concentration, as skipper Zander West constantly watched the sonar, which was soon giving promising echoes to starboard. He also had to react to course, speed and warp alterations called for by John Ritchie, who was monitoring the performance of the pair-trawl – which was by now skimming the seabed – on his net-sounder.

After 30 minutes, during which time the boats towed through one mark that was 29 fathoms deep, skipper John Ritchie reported that the first ‘egg’ or catch sensor had been activated, indicating that some 40t of fish were in the codend. With a guaranteed market for only 90t, the tow was terminated just on the hour mark, when the second egg on the bag was triggered. 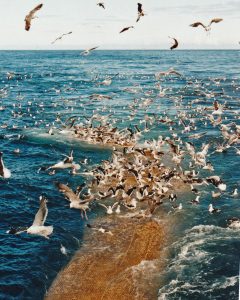 Daystar hauling for 90t of herring after the pair-team’s short second tow.

As the gear was hauled, the two boats closed together to allow the sweeps to be passed back to Convallaria VI, whose crew quickly clipped the sweeps onto the net drum as the wings of the trawl were heaved aboard.

A large Norwegian purser – one of many, along with the Dutch freezer/trawler fleet, that caught large quantities of herring in UK waters – had recently arrived on the grounds, so skipper Zander West quickly left Convallaria VI hauling in preparation for pumping the herring aboard, and steamed a couple of miles north to try to locate some marks for Daystar.

At the same time, he was making phone calls ashore to try to secure a market for any potential catch. Without an outlet, there was no point in shooting and wasting quota.

Skipper West located another very strong echo on the sonar, and Daystar steamed over another huge mark of herring, which the Simrad EQ 55 echosounder showed to be 30 fathoms deep, in 37 fathoms of water.

Another smaller but still very good mark was found two miles south-southeast, and the positions entered into the plotter. Daystar then steamed back to Convallaria VI, which had by now pumped 100t out of the trawl.

The crew of Convallaria VI passed their fish-hose across to Daystar, where the crew connected it to the fish separator to pump aboard the last 15t from the first haul. 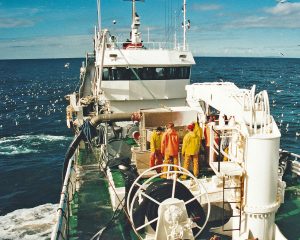 Pumping in progress on Daystar.

The net-monitor gave a very clear picture of the trawl’s position on the Simrad CS EC-222 sounder, as the second tow of the morning got underway at 10.30am, heading south-southeast in 35 fathoms. The concentration in the wheelhouse was again intense, especially as this time Daystar was responsible for the communication with the trawl.

Skipper Zander West took responsibility for the sonar readings and the boats’ heading and speed, while mate Wilson Stephen was on his knees intently observing the position of the trawl, which showed a headline height of 10 fathoms, with the footrope at 35 fathoms in 37 fathoms of water. Constant calls were made for fine adjustment of headline and footrope warp lengths to ‘driver’ Davie Kennedy, who was manning the winch console in the wheelhouse, ensuring that the two boats kept the gear exactly where they wanted it, and clear of the peaky bottom.

The first big mark – still some 30 fathoms deep – started to show up on the net-sounder after 10 minutes of towing, shortly before the first ‘egg’ activated.

A few relatively small marks were then encountered, with the result that the codend sensors were indicating 80t. Before the tow had commenced, Zander West had received confirmation that Fresh Catch of Peterhead would take a maximum of 110t of herring into Fraserburgh that afternoon, so the decision was quickly made to haul, even before the second good mark had been reached. 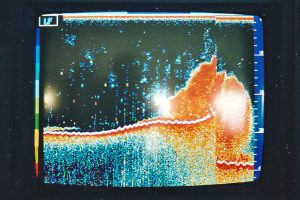 Daystar passes over the first good mark of herring.

Clearly the potential for a big haul existed, but if the pair had towed back through the marks with no market, this would have been pointless – which reflected the determination of the skippers to fish to their markets.

A healthy-looking bag surfaced to confirm the indications shown on the net-monitor. While Convallaria VI steamed away southwest to land at Peterhead, Daystar’s crew pumped aboard 95t of top-quality herring, counting 135 to the basket, to complete a textbook pair-trawling trip.

As Daystar got underway for the Broch at ten knots, the crew settled down to one of cook Ally Duthie’s chicken curry specials. It was a good job there were 20 miles to steam.

Purse-netting era draws to a close

At the time of this trip nearly 20 years ago, only two boats in the Scottish pelagic fleet, Fraserburgh skippers Andrew and William Whyte’s Grateful and Gratitude, were still purse-netting.

These boats were scheduled to be replaced with a modern pelagic vessel (Forever Grateful FR 249). This would mark the end of the purse-net era which, after 30 years, was the foundation for the modern pelagic trawler fleet that had evolved in the past five years. 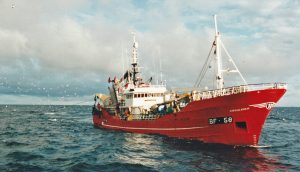 Although almost half of the Scottish pelagic fleet still carried purse-nets at this time, few had been shot in the past two years. The smaller boats, in the region of 2,000hp, were pair-trawling, while the new generation of bigger pelagic vessels relied on single-boat trawling.

The dramatic turn-round, which started in the mid-1990s and led to an extensive pelagic rebuilding programme, was mainly in response to the trend for the all-important mackerel stocks to move into even deeper water, and to swim ever faster.

The third generation of 60m/70m pelagic vessels, such as Quantus, Kings Cross, Chris Andra, Christina S, Pathway, Altaire and Research, released most of the second generation of (now lengthened) 40m/50m vessels. These were originally built for mainly purse-netting, but could also trawl. When these vessels came onto the market, they were bought to replace lengthened 35m/40m first-generation pursers, many of which were sold to African countries.

Changing catching and marketing opportunities also meant that the 24m class of pelagic pair-trawler that existed five years previously, such as Scottish Maid, Quiet Waters, Dayspring, Uberous, Modulus and Golden Dawn, were no longer viable. As a result, these boats left the pelagic fleet, with some being converted for twin-rig trawling.

Twenty-one years later, most of the vessels in the UK pelagic fleet – all of which were built after the Daystar/Convallaria VI trip – are dedicated single-boat midwater trawlers. The two exceptions are the Co Down pair-trawlers Stefanie M and Havilah, and the Peterhead boats Lunar Bow and Pathway, which use purse-nets for a few weeks every year during the autumn mackerel fishery in the North Sea. 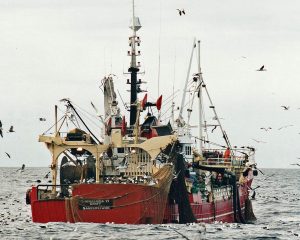 Preparing to lower the fish pump on Convallaria VI, with the bag hauled forward and secured.

Daystar was built by Simek at Flekkefjord in 1987 as the 43m Lunar Bow PD 265 for Peterhead skipper John Buchan. Lunar Bow was lengthened by 6m in 1993 when three additional RSW tanks were inserted amidships.

Lunar Bow was sold to Gardenstown skipper Alex West in 1996 and renamed Daystar, as a replacement for the 21-year-old and 37.4m Julieanne BF 250.

Julieanne was the first in a series of five sub-80ft registered length dual-purpose purse-seiner/trawlers built at the Maaskant shipyard in Stellendam, Holland in the mid-1970s. When new, the open-decked Julieanne featured an 850hp Mirrlees Blackstone main engine and three RSW tanks plus a dry hold. Julieanne was lengthened 24.5ft in 1978, when additional catch-storage tanks were added. At the same time, the vessel was shelterdecked and the wheelhouse was raised. After being re-engined with a Stork Werkspoor unit in 1983, Julieanne was lengthened for a second time in 1988, when a new wheelhouse was fitted. Julieanne was sold to Galway and renamed Girl Stephanie G 190 on being replaced by Daystar.

Two years after this trip, Daystar was bought by Kilkeel skipper Sammy McCullough and renamed Stefanie M N 265, as Alex and Zander West prepared to take delivery from the Zamankona shipyard in Spain of the 61m midwater trawler Ocean Quest BF 77, which generally paired with her sistership Ocean Venture FR 77.

Convallaria VI BF 58 was completed at the Maaskant shipyard in 1978 as the 137ft Fraserburgh purse-seiner Andra Tait FR 226. The vessel was lengthened by 26ft in 1983, when three RSW tanks increased the vessel’s carrying capacity. After a whaleback was added in 1986, the original Wichmann 1,500hp main engine was replaced by a 2,500hp Caterpillar unit in 1993.

Skipper John Ritchie and partners bought Andra Tait in 1997 to replace Convallaria V, which was sold to the Western Isles and renamed Regina Caeli CY 58.

Convallaria VI moved to Shetland in 2002 as part of the project to build the 76m Altaire. 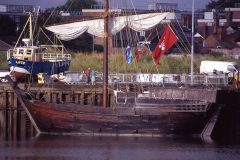 Boston: Of cogs and stumps and the price of fish 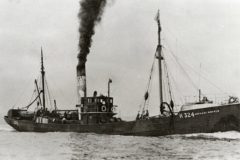