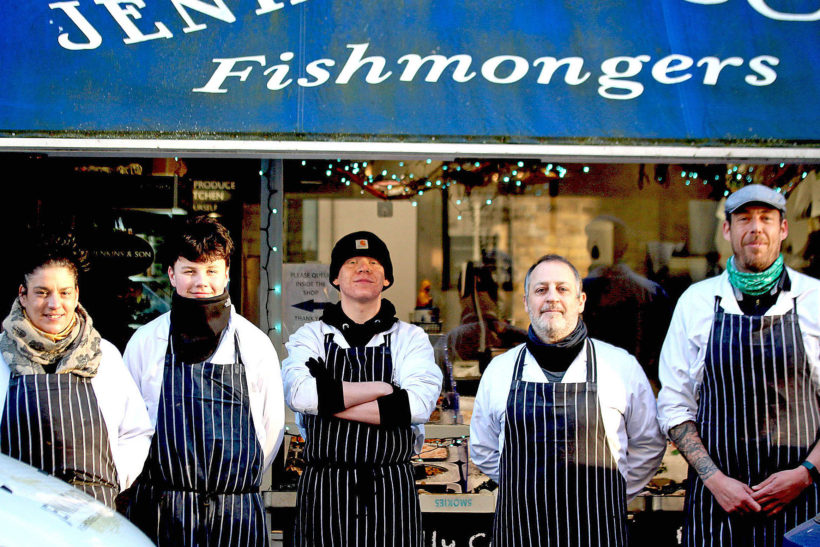 In the Kent town of Deal, a ‘limb’ of the Cinque Ports, fishing is now mostly about preserving heritage, reports John Periam 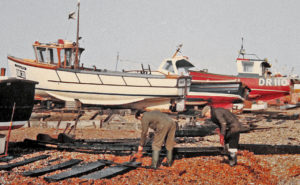 Fishing boats on Deal beach as recently as 2001. 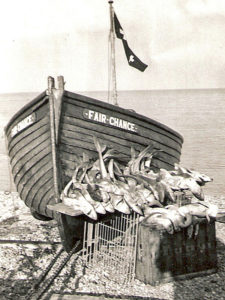 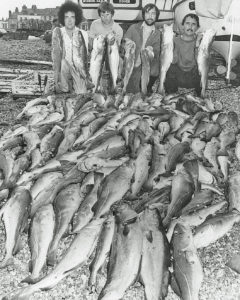 A bumper catch from when cod was still plentiful along the southeast coast. 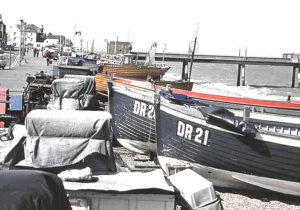 The South Parade at Deal in the 1970s, with fishing boats hauled up alongside their winches. 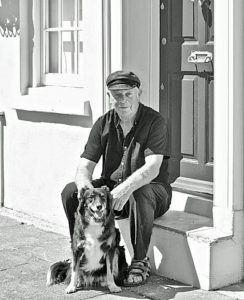 David Skardon, who was the last full-time working fisherman in Deal, is now dedicated to keeping the town’s fishing history alive. 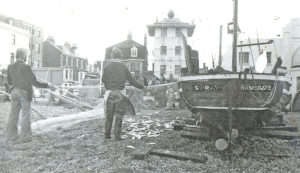 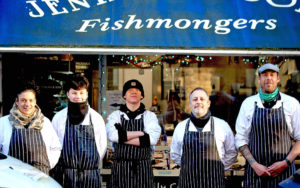 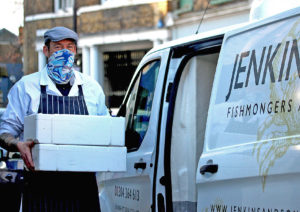 Due to the lockdown, Darren Jenkins now does three home delivery runs each week.

The pre-eminence of the Cinque Ports in Kent and Sussex began almost 1,000 years ago. Comprising five member towns and their seven associated ‘limbs’, which were added later, some, such as Hastings, remain centres for inshore fishing. Sadly this is not the case in such towns as Deal. A combination of factors along the southeast coast of England has caused many inshore fishermen to hang up their nets.

Deal is one of those small coastal towns that attract people who want an idyllic life by the coast, yet with easy transport access to London. Sadly, as in many coastal towns, second home ownership causes price inflation, preventing locals from purchasing properties for themselves. This of course has had an effect on many inshore fishermen, who are unable to afford the high prices.

Until the late 1970s, fishing boats could be seen operating from the steep shingle beach in front of the promenade at Deal. It was far from easy launching heavy wooden boats into choppy seas, and retrieving them later laden with the day’s catch. Today, only one fisherman, Dave Lawrence, fishes from Deal, targeting herring, which he sells on the beach from time to time, keeping the past alive.

Now retired, David Skardon was the last fisherman to fish full-time from Deal beach. With diminishing help in getting his boat back ashore, this task became ever harder. David said: “There were depleting fish stocks in the Channel, and fishermen who relied on a wage from the sea as an only source of income are now history.”

At the age of 72, David is now dedicated to documenting Deal’s fishing history. He has created a website detailing the town’s fishing past and dedicated fishing families. He has also now started to accumulate short videos that he has put on YouTube, and has written a book on the Deal beach fishermen, called Tom’s Adventures at Sea. During the Second World War, 10 of the Deal fishing vessels went to help evacuate troops from the beaches of Dunkirk. Only seven returned.

David said: “I took a trade up in boatbuilding at the age of 14, then worked as a boatman for the Royal Engineers at Dover, where I became the youngest person to hold an ‘A’ licence. Going back to sea fishing, I have owned many beach boats at Deal, including the Fairway, Spray, Fair Chance, Mary Anne, Dauntless, St David and St Rose, the latter two of which I built myself.

“I travelled around the country, having been a skipper for some years. Those were the days when fishing was enjoyable, hardworking and sustainable. For 10 years I did daily deliveries from my van after a day’s fishing.”

Today, as David looks out across the Channel towards France, what does he see? “Big factory ships that appear from time to time, destroying the seabed, and trawlers often exceeding their limits and taking all the fish stocks up with them. In the good days, the smaller vessels and crews kept the industry alive.

“It will be nice to get our waters back now we are out of the EU. I hope we will see our inshore fishing fleets grow, and bring back youngsters to the fold. In my day, one could go to any port and see trawlers and fishermen, but sadly this is now a very rare sight. Look at Ramsgate, Folkestone and Whitstable, with vessels down to single numbers.”

David added: “Surely giving a vessel a far better tonnage, so she can keep all the fish caught until her tonnage is reached, is far better than a quota for specific species, resulting in many good fish being discarded dead. That is frankly stupid.”

The decline of the industry in Deal can also been seen on the retail front; where once there were five fishmongers, there is now only one. This is owned and run by Darren Jenkins under the banner of Jenkins & Son Fishmongers, and has been in the family for over 70 years. Darren is the fourth generation, and works with his two sisters and nephews running the shop, which has a staff of seven.

Darren remembers, as a child, seeing the fishing boats come up onto the high shingle beach and unload their catches, with winches overheating. Today, he is a staunch supporter of local fishermen, albeit from a wider stretch of coast. “I source most of my fish from fishermen along the coast – Leigh-on-Sea to the east and Shoreham to the west, at times even going to Newlyn in Cornwall if stocks of a particular variety are required.

“We get our mussels and scallops from the Shetlands, and sardines from Cornwall. We are lucky locally when it comes to crabs and lobsters. We sell over 2t of fish a week from our one shop now.”

Darren said: “We have made a concerted effort to keep up with the times, and in addition to the shop on the ground floor, on the second floor we prepare our fish and make up specific dishes for customers. We explain the day’s catches to our customers, and try to bring them new ideas that relate to the cooking of fish.”

Darren and his team are committed to educating their customers and introducing them to different species. “We are pretty lazy when it comes to the type of fish we eat in the UK, and there is only a small group of people who like to try different menus. As one foodie once said to me, ‘I love fish, but when I eat it, I don’t like it looking like a fish’.

Due to the lockdown and the resultant closure of local hotels and restaurants, Darren has had to expand into new ways of selling.

“We have now started a home delivery service three days a week, which we were not doing before. We have opened up an online shop where customers can order, and we can then do the delivery. On this site we also include Menu of the Week and daily blog updates. Things have had to change. Chatting online is now as important as chatting over the wet fish counter.

“In 2008, we were actually exporting fish to Europe from our shop – this is all history now. Keeping up with the times is what it is all about.

“In 1972, when we joined the EU, we gave up our fishing rights. What I want to see now – sooner rather than later – is our 12-mile limit returned and policed properly. I can talk about this all day, and how they get away with catching what they do; it causes me many restless nights. They have rules and regulations that put restrictions on the preparation of shellfish, etc – yet it is ‘all from the same pond’.”

A particular source of irritation for Darren is that there appears to be one rule for the EU and one for us, with large vessels from France, Holland and Belgium fishing close to our shores. “I then meet up with our fishermen to purchase fresh fish, and it is common to hear that they have not caught enough to pay for their day’s fuel. It is terrible, and shows in their faces!

“Let’s see what happens once the lockdown is lifted in Europe and they reopen their restaurants. I have a feeling they might come knocking on our door.”

The industry must move with the times, as Darren is doing. He would very much like to see the return of younger fishermen, and has noticed this happening in some areas. However, he says that, sadly, as things stand, he cannot see the return of fishing boats to the Deal shingle beach.

“We will never see five fish shops back in the town, but we will see our trade increase as more people want fresh fish. We can be proud of what we have done in Deal over the years, and its history as a fishing town – as David Skardon well knows – will live on.

“When you look at some of the other resorts and the way they have declined – well, we have survived, so let’s see what happens. It won’t be for want of trying!” 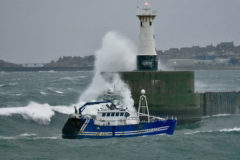 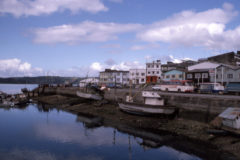 Lowestoft: of herring and a harbour