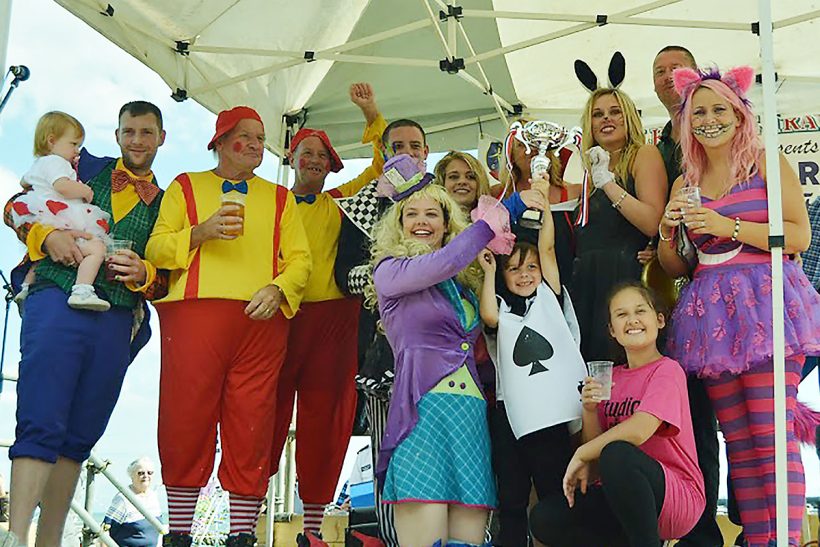 This year’s Folkestone Trawler Race had a record number of 18 entries and attracted over 10,000 spectators on what turned out to be a sunny day, with a slightly increasing wind adding to the fun, reports John Periam.

Above: The Best Dressed Crew winners from Viking Princess FE 137 skippered by Reg Brickell and sponsored by Folkestone Fishermen’s Association with the Folkestone Trawlers Trophy.

As always, the crews dressed the part and before the race they held the popular boat battle in the harbour, aiming deck hoses and firing flour bags at each other.

First away was Sam Allen P 40, skippered by Harry Mardel, leading the other entries to the start line. The course ran from the harbour along the Eastern Cliffs, giving spectators a great opportunity to see the race at close quarters.

First across the finishing line, and winning the cup sponsored by Folkestone Trawlers Ltd, was Viking Princess FE 137 skippered by Reg Brickell, followed into second place by Rowena FE75, skippered by Peter Reed.

Organiser Terry Noakes said: “The first visiting boat home was Annalousion FE 382 from Dungeness, skippered by Jo Thomas. The increasing wind resulted in some of the smaller boats not making it around the buoys for the second time, and returning back to the harbour early, with a few green extra crew members on board.”

There was plenty to do along the quay with nautical trade stalls, entertainment for the children and Folkestone Trawlers selling local mackerel and plaice baps. One of the main highlights was a demonstration by the Dover lifeboat working with the Lydd-based Maritime Coastguard (MCA) Search and Rescue helicopter.

The fishermen of the region are very supportive of the Folkestone-based National Coastwatch Team and have raised funds for them over many years. They made sure the team was given the maximum amount of publicity possible during the day. There was also an opportunity to meet members of the Dover Lifeboat crew.

For the first time, this year there was a raft race in the harbour. Eight handmade rafts, – restricted to paddle power only – took part. The winners were 501 Divers and the Best Dressed Raft prize went to Ron Shucksmith and his crew.

Terry Noakes said, “We rely on tourists visiting Folkestone and this is our way of saying thank you, while at the same time giving them a day to remember. It’s important also that we can show children just what our fishermen do in the current hard times. With so many hanging up their nets, it gives us an opportunity to tell visitors that there is still a sustainable fishing industry that needs their support.” 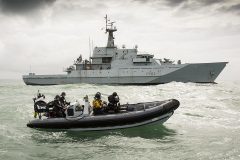 On patrol with the Royal Navy’s fisheries protection squadron 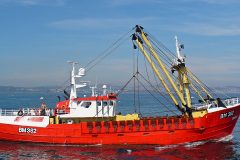