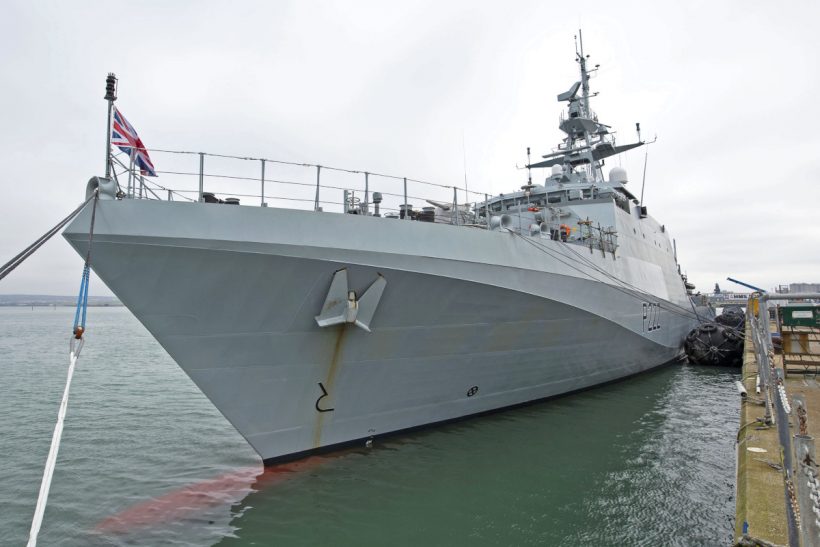 The vessel arrived at its home base of Portsmouth 12 months ago (Fishing News, 5 April, 2018), in preparation for starting operational duties. HMS Forth will be followed by its sisterships Medway, Trent, Tamar and Spey, which are a significant upgrade to the current fishery protection fleet, which continues to be fully operational. HMS Medway is currently undergoing sea trials ahead of being commissioned at Chatham Dockyard in September. Photos: Geoffrey Lee. 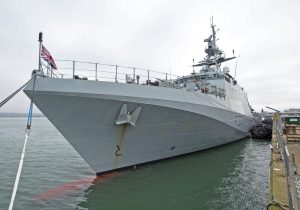 Commander Robert Laverty said: “The past 10 months have been challenging for the crew, resulting in some changeovers and a delay in taking up its working role with the squadron. Being the first of its class, there have been some material issues that we would expect to find with any new-class ship. I am glad to say all is sorted now, and we are ready to take it to sea, and are currently training our crews up to the high standard the squadron expects from us.

“A large part of our job is to effectively set up the onboard working procedures, and to understand the class of ship and pass the lessons we have learnt on to the other Batch 2 vessels that will follow behind us, giving them the opportunity to get into service a lot quicker. It is a learning curve for all involved.

“However, the good news is that the taxpayer did not have to pay anything more for these issues to be overcome.” 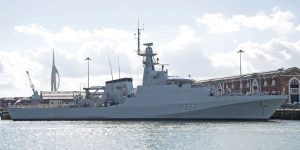 … moored at Her Majesty’s Naval Base, Portsmouth, with the Spinnaker Tower in the distance. (Photos: Geoffrey Lee)

In three weeks’ time, HMS Forth will depart from Portsmouth to commence trials off the south coast, to expand the squadron’s operational envelope while doing some further equipment tests after the initial contract trials, to maximise the utility of Forth. On completion of these trials, HMS Forth is scheduled to go to Scotland for flag officer sea training for several weeks, resulting in the ‘final tick in the box’ to commence full operational duties within the squadron.

Having a flight deck onboard will also mean some operational trials with military helicopters. Robert said, “This will happen towards the end of this year, in all weathers, so we can understand the working capabilities of those involved, including our deck landing teams. It will play an important part in our working role, as we are scheduled to go to the Falklands towards the end of 2019.”

The squadron vessels are there to provide support to the fishing industry as well as to protect those who make a concerted effort to fish sustainably, and within the working remits of UK fishing regulations. 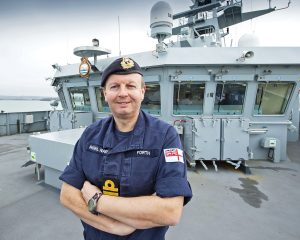 “There have been changes recently to the regulations relating to safety at sea (Fishing News, 1 February), and we are also there in an advisory role,” added Robert.

“When we board a vessel, we look for any visible signs of damage, for example to boarding ladders and hulls. We also like to check the safety equipment onboard, and visit all below-deck areas. For the first few weeks, we will be more of a visible vessel than an operational one, and this will improve once we complete more of Forth’s tasking-role training.

“Sixty percent of the 58 crew have been changed over during the past 10 months while we have been based at Portsmouth. I have concentrated on keeping more of the engineers and senior people. We have been training our RIB teams around the harbour. Regular onboard exercises have also been taking place, while making sure we take every opportunity to improve our own working skills. At the end of the day, the squadron wants to be seen by the public as the ‘eyes and ears’ of the Royal Navy – protecting the UK’s interests and coasts.” 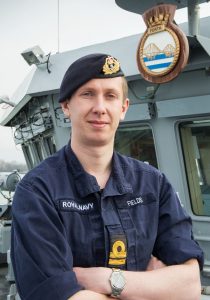 The executive officer for HMS Forth is Lieutenant Sam Fields, who has been onboard for six months. Prior to this he held the same role on HMS Clyde, working in the Falklands. Those who work with the squadron often return following other postings. It is a close-knit community.

Lieutenant Sam Fields said: “We have a huge amount of new resources available to us on Forth, and the Batch 2 vessels are all aviation-capable, so my experience on Clyde will help regarding this, as it is currently the only one with flight deck facilities. Having a flight deck will bring the extra capability to the entire force, and there is also accommodation space under the flight deck for up to 50 embarked forces, should they be required for specific operational duties.

“Our two RIBs are the new Pacific Type 24s. Powered by inboard diesel engines, they are very adaptable and versatile platforms and ideally suited to undertake all types of marine boardings.

“There is no doubt that our RIB crews in the Fishery Protection Squadron are some of the best-trained in the Royal Navy. They do it day in, day out, working 365 days of the year. They are also in a position to offer advice on external safety on a fishing vessel when approaching it, as well as onboard inspections. We want a positive relationship with our fishermen, and we are there to help. When we cross the horizon, we have legislation which we need to enforce to ensure a sustainable fishery for the UK. However, we like to be seen as the fisherman’s friend.” 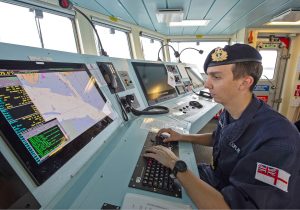 As executive officer, Sam is responsible for the internal workings of HMS Forth, welfare of personnel onboard, and the ship’s routines, while making sure he can deliver the captain’s ‘command aim’.

Unique to these vessels is their three-watch manning structure, so approximately two weeks out of every six, Sam is in temporary command of the ship as well – ‘a role I look forward to and cherish, especially when we sail to the Falklands later this year’.

The commanding officer for the Fishery Protection Squadron is Commander Sarah Oakley RN. “Safety at sea is important to us, and all our ships’ companies work under a strict safety guidance, which includes wearing PFDs on deck at all times when working in exposed areas. It is all about prevention of accidents. Our boarding crews go through stringent training courses, and when onboard vessels are fully qualified to inspect all areas. 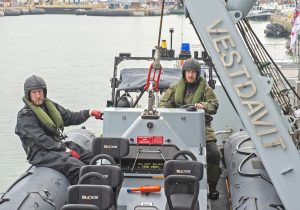 LS (AWT) Matthew Hutchins (coxswain) and AB Stephen Hart Bowman (RN reserves) prepare to be lowered to the water in one of Forth’s two Pacific 24 RIBs.

“I, of course, am aware of the use of PFDs. There have been some significant lifejacket design developments over recent years. They are now less cumbersome and easier to wear. It is all about education, and the need to prevent fishermen falling overboard. But if it does happen and they are wearing a PFD, hopefully they can be saved. It does happen, and we all need to be aware of this. A fishing vessel is a workplace, so it needs to have similar regulations to other workplaces such as offices, factories and building sites to keep the workers safe.

“Our RIBs, as they approach any fishing vessel, do a circle around it to inspect for any hull damage – it is part of their crew training. I am glad to say untoward incidents rarely happen.”

Forth is ready to go soon, and Sarah is delighted that all build issues now seem to have been solved, especially as this has not involved the MOD in any extra expense.

“It is a really exciting time, and for me, it has been rewarding to see the introduction into service of the new Batch 2 vessels. I will soon be taking up a new role at the MoD in London, but will still have strong connections to the squadron. 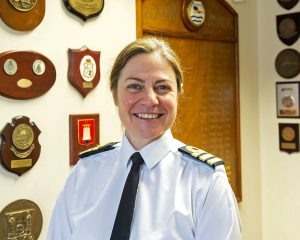 “Commander Simon Pressdee will be taking over in late April. It has given me the opportunity to work with other government departments, including DEFRA, the MMO and regional IFCAs.

“Our role will also extend to communicating and working more with the Border Force, and the police and Organised Crime Agency. There is a real opportunity at the point of Brexit to improve cross-government working. My job in London will be to help improve these working relationships, which I really look forward to doing. We want to get the best out of all the maritime assets that the UK has to offer. There are some exciting opportunities ahead.

“The crews on all our vessels know the UK coastline well. They know shipping movements, even down to a small yacht club holding a regatta. Those involved on watches are often in a position to notice any unusual movements at sea, and report them to others.

“It is so important that we communicate with each other more effectively, and that all parties involved work together. A small single-handed fisherman is as important as a crew working on a larger trawler. The fishing charities, such as the Fishermen’s Mission and the Shipwrecked Mariners, do a great job. It is a team effort, and we appreciate the conditions our fishermen have to work under. Some go out in inclement weather at times, trying that little bit harder to earn a living. We monitor situations such as these closely, while working with the Maritime Coastguard Agency. Should any incident arise, the MCA communications centre at Fareham has no hesitation in asking for our assistance. The new flight decks will be a real bonus if required.” 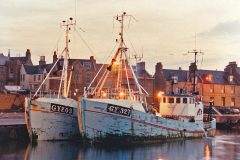 Ports in the past… 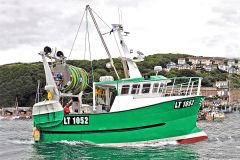