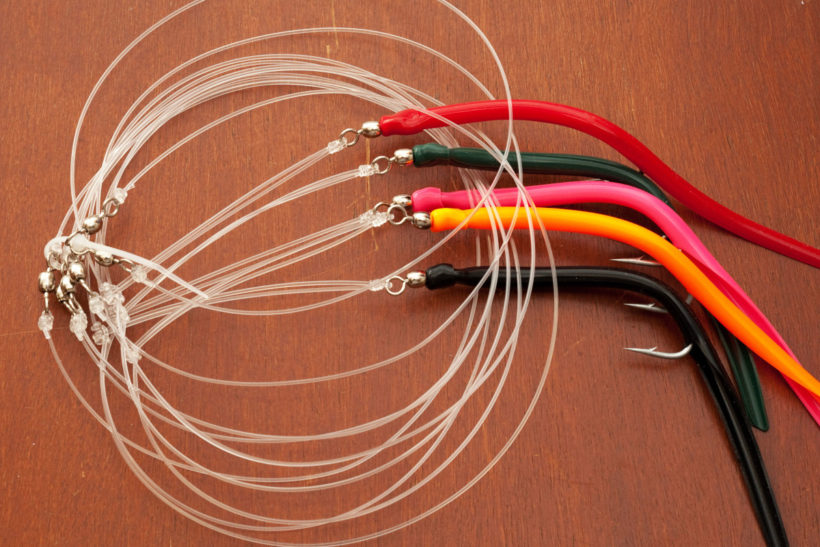 If geometry is critical in trawling, is it when towing lines with pollack boards? In my opinion, it is. Being aware of what is happening to the line – imagining its behaviour at the catching end – is vital. 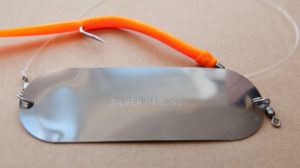 A silver darling with the end Gummimakk attached. 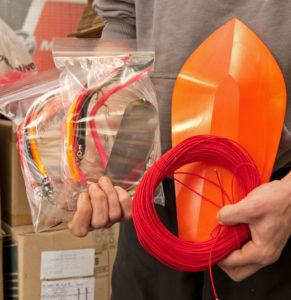 Part of the range on offer from Fairwater Fishing. 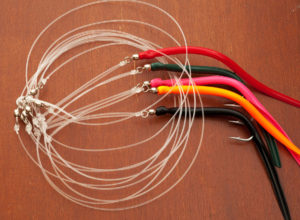 A typical trace with five Gummimakks. 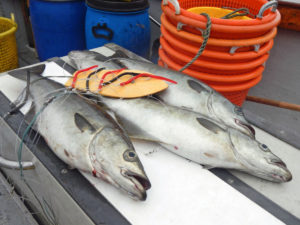 The K11 from Ireland has worked well for me for many years – here on sardines. 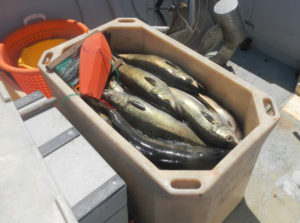 A catch from 2013, which (for me) was a great year. I would never store it all in one bin, however – too much weight and pressure on the bottom fish. This was just for the picture. 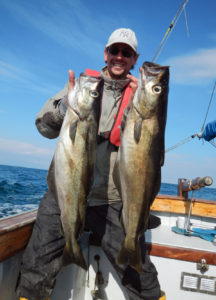 French marine biologist and ardent angler Taimoor Jolly often helped me when line-fishing for pollack and squid. He now lives in Australia, and is still catching squid from the shore near Perth. 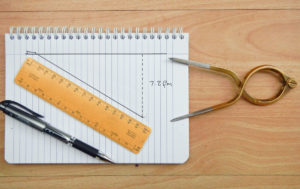 Here’s my first look at the geometry of the K11 board, back in the late 1990s – will it be the same for a K12, and now with far thinner and stronger tow-line?

Before we begin, I’m not an expert at pollack board fishing. Best described as ‘keen’, I remain on a steep learning curve. Masters of the technique span Britain and Ireland. One such person is a supplier of the gear – skipper Ed Russell, owner of Fairwater Fishing, based in Looe, a time-served fisherman whose love of commercial line fishing is evident.

But how does geometry relate to what the line ‘says’ at the boat end? How can you vary the depths and be sure that you get an undamaged board back? Will the lures be at the right depth to attract the fish? Or will the board crash into the rocks, so you go back to the mooring fishless, with your bank balance about to suffer?

There’s nothing better than finding out in practice. I’ve been pollack boarding for many years, and have lost just three boards – one towed into net gear (I think), one jammed in a rock, and clever me trying to shoot one away too quickly and hearing a ‘thump’ in the propeller! A note: if you lose a board, quickly press a mark on the chart plotter – the board floats and, depending on the wind, won’t move far.

I first witnessed pollack boarding 25 or so years ago, but only worked that board for a short time. A small firm in Ireland had access to the famous range of Yo-Zuri pollack boards, made in Japan. I don’t know what species in waters around Japan the boards are intended to catch – tuna, probably? However, I was sent a ready-rigged set and asked if I would give it a go and report it in Fishing News – which I duly did.

That board was marked as a K11 (I’ve still got it) – perfect for the shallow water close to my home. The area is not famous for holding big pollack, but fish weighing 2kg are not rare. Being no distance from the Helford river, I chose to go in my punt, rather than the GM19 I had at the time, Charlotte Louise.

At fairly low revs on the 4hp outboard, I streamed away the trace, and over went the board; I gave it 10 fathoms of towing line. The Irish firm had sent a guide containing information from the many successful Irish inshore fishermen who were making serious returns from this low-cost method.

In no time, the trace came fast – but the ‘rock’ started moving. It was a pollack, and one weighing 3.5kg. This obviously made a great story; the company sold many more boards, and I was allowed to keep the gear.

But pollack was yet to become an ‘in’ fish. As a result, line-caught pollack didn’t make huge prices on the fishmarkets. The wreck-netters were catching plenty of pollack, and landing fish in excellent condition.

About 15 years later, the consumer’s appreciation of pollack changed. The hard work done by Seafood Cornwall, Seafish and other groups delivered increased demand by pushing the concept of ‘hook and line’ fish. In the wake of bass tagging to promote the sale of line-caught bass, a pollack tagging scheme followed. Chefs like Rick Stein were great promoters of hook and line.

Personally, I find the taste of pollack quite bland – but then again, many of today’s seafood chefs plaster fish with every herb under the sun. The true taste of the fish is hidden – but connoisseurs love it.

(Cooked with nothing but a knob of butter and topped with thick slices of onion, my favourite fish dish is a thick steak of hake. Wrap it all in a packet of foil, and slowly bake it on a low heat for 45 minutes to one hour. The hake literally cooks in its own juice; all you need to accompany it is freshly baked bread and a fork.)

I find the technique of pollack board fishing fascinating – the geometry of the tow-line, timing the changing engine revolutions, making the board ‘dance’, choosing the right board for the right conditions, selecting the correct trace, and so much more. Pollack boarding can be daunting – but not if it’s taken stage by stage.

The advice I was given was to concentrate on what the gear is doing: “Picture what the board and the Gummimakks are doing, rather than what the boat is doing.” I’ve got you there – what is a Gummimakk? It is the modern version of the traditional ‘rubber eel’.

Used over generations in Britain for catching pollack, the red rubber eel was the all-time favourite, a simple long-shank hook covered in coloured rubber tubing, with the tail-end bending downward for the eel to spin. A Gummimakk is many times better; its hook is kinked to make the eel ‘work’, and Ed Russell has gone further, using hooks specially made for his firm. Believe me, they work very well.

On his website, Ed says: “We have further developed the traditional Gummimakk lure, which was originally invented as a sandeel imitation by fishermen along the Norwegian coast. Over the years it has proved deadly for catching cod, pollack, coalfish and other predatory species.”

Here is a typical day for me on the technique. This may not reflect what others do – many of whom catch more fish than me. Fishing ground available to me is often netted, so any clear areas to tow in are few. I generally work on an eight to 12-fathom contour line, and a K12 board is my favourite – but a K11 is just as good. I use a K13 when the ground is deeper – though the key factor is not the depth available, but the depth at which pollack attack.

Having moved to shallow ground, pollack will be seeking feed-fish – sardines, sandeels and all sorts of juvenile fish – which is where my colour sounder comes into its own. Shady marks of yellow and blue are feed-fish, and small dark red marks are often pollack – though sometimes I catch the odd bass, nearly always on the end Gummimakk.

With my favourite K12 board, I use six Gummimakks. On the trace, each Gummimakk is set just over one fathom apart, and a swivel is fitted midway. The end Gummimakk is attached to a single snood of 60lb breaking-strain nylon, and is a break-free line. I sometimes change the line to 80lb breaking strain. I also sometimes change the end Gummimakk for a Sidewinder lure – and the bass love Sidewinders. There are so many similar lures to use, and I must have hundreds that have never got wet – the old saying is that buying lures, spinners and plugs catches more fishermen than they catch fish!

In a trace of six Gummimakks, I also fit a ‘silver darling’, and set the attractor between Gummimakk numbers four and five. A silver darling is a hookless flashing metal blade, based on a traditional Canadian salmon attractor known as a ‘herring dodger’. Details of the silver darling are on Fairwater Fishing’s website.

I like to find peaks and troughs of rock/gravel, and have a big advantage here. In my younger years, I continually dived that area, concentrating on the small runs of gravel in between those rocky peaks to find scallops.

Several of my favourite pollack spots are odd, because underwater I never saw any wreckage or unusual rockface – just a normal run of rocky ground – but for some reason, the pollack love particular peaks. One is so good that I call it ‘the three-two-one’. By the time I have counted down from three while passing over it, the board has often flipped over, and comes up with a pollack or two attached.

But what of geometry? How deep do I want the board to dive? How deep can it dive? And why do I want the Gummimakks to travel two or three fathoms or so above the average depth of the ground? My theory on that is based on fish behaviour – and on what I have seen on dives of fish like pollack.

Scientific evidence on the behaviour of pollack is scarce, and there is not much official data available. However, there is little doubt that pollack attack upward, so towing lures below them may be a waste of time. When you are rod-fishing over a wreck, the pollack nearly always take while you are slowly winding upward. Sometimes they don’t take until the lure is 10 fathoms or more above the wreck.

Situated on the western entrance to Falmouth Bay are the famous Manacles rocks, where over centuries many ships and mariners have been lost. It is therefore a noted dive spot for wrecks – it was a favourite dive spot of mine, and is a perfect flume tank in which to watch fish behaviour; even on a neap tide, the waterflow is strong.

Often in groups of 10 or so, pollack hug the kelp, normally down to around 10m, when the kelp beds start to thin out. Pollack swim on the lee side, gently finning in the backflow of water, attacking passing species like lance (greater sandeel) or mini mackerel. The attack is a short, fast, upward strike. The fish then quickly returns to the pack behind the peak.

A comparison of the behaviour and feeding ecology of saithe and pollack, undertaken in a Scottish sea loch, Loch Ewe, by the University of Aberdeen in 1995, found that: “Pollack were generally solitary (in attack) and used the kelp forest exclusively for cover, behaving as ‘sit and wait’ predators and ambushing their potential prey from beneath the kelp canopy.

Scribblings in my old diaries and diving logs confirm this. Generally, when fishing with a pollack board, or just towing a lure, if I find a peak with pollack on it and I manage to catch, I take note of my course – in fact, I start tracking on my chart plotter – and almost 100% of the time, if I turn and tow back in the opposite direction, I get nothing. But if I turn and steam the original course again – success.

In my opinion, there’s no point in towing anything other than the original direction – just steam wide of the mark and make a circle – and when you retrace the same direction, hug that track as close as possible. The tow needs to be very accurate – a few feet either side and you have missed them. The peaks are small, and there are only so many fish there; taking too many may ruin that peak for a long time. I take a few fish, then move on. In all likelihood, there will be fish nearby.

So how much towing line do I use? After initial advice from Ed Russell, I tried a ratio of anything between 1.5:1 to 2:1. With a K12, I use 14 fathoms from the towing point, but that’s a very rough guide. I don’t have any accurate geometry to offer on that yet. Time for me to swallow a few painkillers, grab a can of diesel, and get back out there. 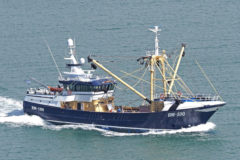 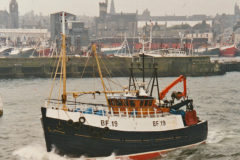