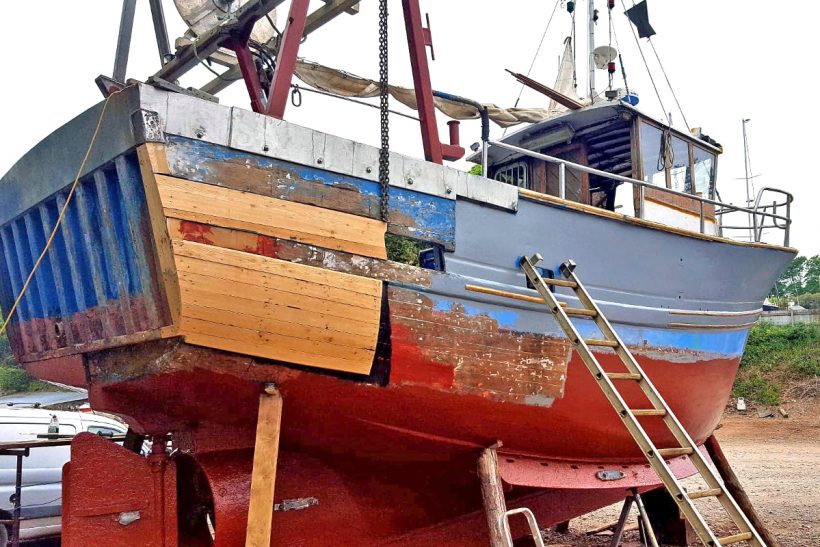 Adela refit part II – “It’s the way you paint it”

In the final report of a refit to the Brixham inshore trawler, Adela BM 79, I invite you to see how with a dab of paint, a relatively tired-looking boat can become a star of the local inshore fleet. “It isn’t what you paint it with, it’s the way that you paint it,” I was told.

After a recent extensive refit at Dartside Boat Park in Galmpton (near Brixham), Adela is now back at sea with skipper Tristan Northway fishing through the summer lulls of Westcountry inshore trawling. From the refit, Adela now has fuller potential to reap rewards from the forthcoming months.

And, by the turn of this year, skipper Northway will make a final payment (to the present owner, Steve Baker) to become the new owner of Adela. Such investment will set Tristan on a new direction in his fishing career and might one day lead to a new-build making the most of the trawling potential of an efficient 8m boat, one along the lines of Adela but made of steel.

Not yet a rule, but for many years UK boat designers have waited patiently to see the powerful U10 rule-beaters taken into a separate category, with U8s becoming the top end of Britain’s low-impact fishing fleet. Changes in fisheries management after Brexit might provide that opportunity.

For skipper Tristan Northway, commercial fishing from South Devon stretches back to his childhood. He explained: “As the years went by, even though I spent time aboard ‘day boats’ (a Brixham term for boats measuring just under 50 feet), and beamers too, Adela was the first boat I ever went to sea on in my mid-teens, and I couldn’t forget that experience.”

Two years ago, Tristan left the bigger boats behind and returned to his love of true inshore trawling by taking charge of the Adela, an opportunity he couldn’t refuse, and began working on the lucrative grounds around South Devon. “Mainly for flats,” he said. 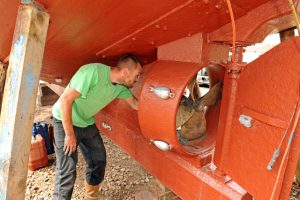 Tristan says the Kort-like nozzle, a four-bladed propeller and a Mitsubishi engine with low fuel consumption is an economic and efficient package. Note the size of the keel – huge for a boat of 9m in overall length. The original keel was added to, and all woods are covered in steel.

Searching on Facebook for more information on why the Adela was built so robustly, I found evidence to reveal how its first life as the Guernsey potter, Violettes du Sud, required a heavy build to tackle the requirements of potting around the Channel Isles. At that time, rough work challenged many GRP boats. Big tides, hard ground and unpredictable winds were commonplace, and wooden boats (like the Camaret boats) had evolved accordingly.

Pointing to Adela’s superbly-painted hull, I said to Tristan: “That paint is so smooth it looks every bit like the gelcoat of fibreglass.”

Tristan replied, “It’s the way that you apply the paint, and I have now learnt to do that a bit better. I never knew it was so important to get it right, and I’ve had a lot of tips from others to get it right.”

Steve Baker painted the hull a couple of years ago, and Tristan described the workmanship. “It looked like a yacht. The final finish was to a level that I would like to reach one day.” In reply, I heard Steve Baker say: “What he’s done so far on this refit is good, but as years go by you get better at painting. It takes anybody quite a while to get it right; it needs patience to get a boat looking exactly how you want it to look.”

Perhaps UK boat designers should have carefully studied line drawings of boats like the Adela and, frankly, copied them. A Brixham day boat of that style would be an awesome craft. The lines of a Cygnus GM33 are close, but it doesn’t have the fullness, some say. The Kingfisher 26 is a step toward the lines, and so is the K24, but as yet UK boatbuilders have not developed a design similar to Adela. As the UK range of GRP fishing boats evolved, that ‘full’ French style was never really addressed completely.

The spacings between the Adela’s frames are equivalent to those aboard a much bigger boat. I asked what woods the planks and frames were. Larch on oak, I suggested? Neither Tristan nor Steve is 100% sure, and I was shown a section of an old Adela frame that has been replaced. For a test Tristan tried to hammer a nail into it; the nail bent over.Perhaps the frames are oak, but hard, old oak to say the least.

It may need a traditional boatbuilder to discover quite what the Adela is made of, and as local wooden boatbuilder Bobby Cann often says: “There are only three types of wood at a good boatyard – larch, oak and firewood!”

With a relatively new propulsion package (a Mitsubishi purpose-made marine engine with less than 8,000 hours on its clock), the Adela ‘tows like a train’, remarked Tristan.

With a Kort-like nozzle and a gearbox reduction-ratio of 2:1, the bollard-pull of Adela may equal a much bigger craft, but weighing 28t it has the bulk to do that. Tristan added, “The engine and package is almost new; it was chosen to be efficient in all respects, low fuel consumption being a main point, and, in total, the re-engine cost around £30,000.”

Made by Steve Baker, the trawl winch on Adela is a compact unit that has plenty of power, and plenty of working-years left in it, I was told.

Part of Adela’s rails were replaced, so were small sections of its planking, and almost all the sacrificial double-planking; all internal covers in its wheelhouse were improved, and plans are in hand to remove the temporary wheelhouse internals and take the superstructure back to the original woods. It has an impressive package of electronics.

In its previous life (as a potter) Adela was of lesser displacement weight. Since its purchase by Steve Baker 28 years ago, the craft has steadily become heavier and a better sea boat, I was told. During that time it had a new false-keel fitted; its wheelhouse was moved forward, a new engine and fuel tanks were installed – the present Mitsubishi being its third engine – and with a trawl winch and gantry, ‘the boat just feels better’, explained Tristan. 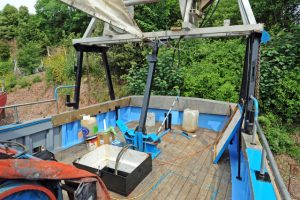 Plenty of deck space, a strong gantry and a steadying-sail – attributes that may one day be standard on an U8m trawler, the top end of low-impact fishers.

He added, “I’m really happy with the boat. It looks right, feels right at sea and is a good earner, but an equivalent steel boat of just under 8m in length is on my mind. But I have a long way to go before I can take that chance.”

Unknowingly, skipper Northway and more like him are thinking along the same lines; and within its ideas of post-Brexit fisheries management, so is DEFRA. Its post-Brexit moves may provide a new fleet-structure, stripping the U10 rule-beaters from the true small-boat category, with U8s being the top end of low-impact fishing.

Skipper Northway explained, “If built properly, a U8 trawler could have serious earning potential, and if the authorities work out better management of the fishing stocks I wouldn’t hesitate in investing. So many of us believe that after Brexit a better future is ahead, especially for low-impact small boats, and I really hope that it comes true.

“At present, if the authorities think of inshore trawling they think of twin-riggers with big horsepower, and trawlers the size of Adela are few and far between now. However, not that many years ago, they were plentiful, especially in Lyme Bay.

“There are profits out there by using a small net on relatively clean ground. It is important the way the net is used and as far as I can see, those old skills have almost died out. To have the right wires and combinations, the right rig, a scraper-trawl like the eight-fathom net that I use, can be successful.

“I don’t look for whitefish, there’s not much lift (in the net) at all. I’m only interested in the flats and if I do hit whitefish they are feeding hard on the bottom and it’s a bonus. The net design is almost as old as Brixham, and specifically designed for catching flatfish.

“As an example, about a month before we started the refit, working in Start Bay with a shorter tow of 90 minutes or so, I hauled in 120 stone of good flats. From three short tows I went back to Brixham with 265 stone of good flats, all taken from an eight-fathom net so light that put it in an onion-sack and I could almost carry it home on my back!

“I use Thyborøn trawl doors. They’re a bit expensive but very efficient. I use about 100 fathoms of wire but even in deep water, with 100 fathoms off the drums, the doors are still hard-down on the bottom and fish really well. I use about 90 fathoms of bridles, so it has a pretty good spread.

“I don’t do any long tows. I hear of five-hour tows on the bigger boats and I used to see that on some of the day boats, but I couldn’t put up with that on the Adela. I would much rather have a short haul and keep the quality of the fish as high as possible. For me, the top end would be a three-hour tow, but that is very rare; normally about two and a half hours is the longest because the places where I fish have plenty of dogfish, and that doesn’t help.

“Dogs don’t make much money, but I keep them back and at the end of a day, they pay or help toward the day’s fuel bill. If I can make in total £450 per day, I’m happy. If you had that on a bigger boat, you would end up scratching for a wage.”

The final payment on the Adela gives skipper Northway his step onto the vessel-owner’s ladder. He already has drawings (from a Scottish yard) of a suitable U8 trawler with a beam of 4m – a boat that could currently be built for just under £200,000, I was told.

If DEFRA keeps its eye on the ball – and at present it seems to be talking sense on pro-Brexit hopes for inshore fishermen – there may be another batch of low-impact U8s joining the British fleet. 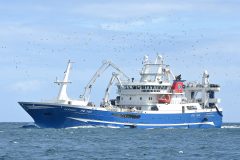 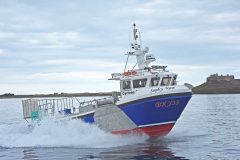