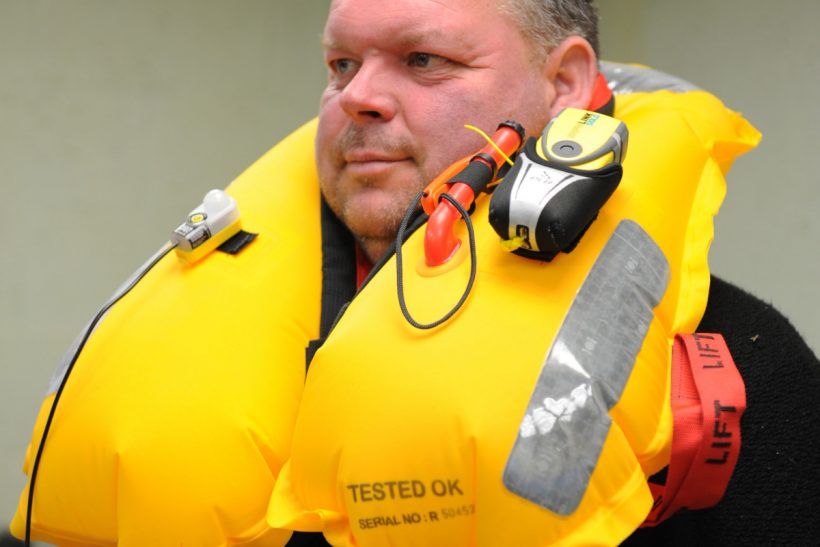 In the successful rescue of Brixham beam trawler crewman Reegan Green, his safe passage home resulted from the superb work of Emilia Jayne’s skipper Jason Holden, his crewmen, and most importantly, the priceless SAR helicopter team.

But had Reegan not been wearing that lifejacket, the outcome could have been very different. 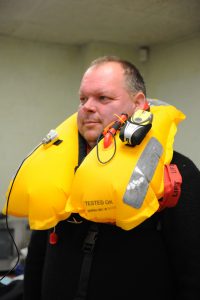 Clive Palfrey with the latest Mullion lifejacket designed for fishermen.

I devote this Inshore Corner to all fishermen – particularly those at ports like Plymouth, Brixham, Newlyn and others – where local authorities have now wised up to the need for fishermen to wear a lifejacket. It is now mandatory to do so, following MCA Marine Guidance Note MGN 588(f), issued last year.

On seeing the words ‘safety at sea’ in Fishing News, the response may all too often be: “I will read that later.”

Sometimes, being guilty of doing that myself, my flippant thought about ‘safety at sea’ is to assume that, if anything untoward happens, I have a pretty good chance of coming home.

Having done all the necessary Seafish courses, and having the yearly-tested lifejackets aboard – with all flares in date – what more do I need to stay safe?

Fishermen at Plymouth who are taking part in a long-run lifejacket awareness project may have a greater sense of safety awareness than I do.

Earlier today, I had one of the biggest reminders that I should just listen, and that if I don’t know something, I should swallow my pride and ask.

A dose of my least favourite easterly wind made me leave the boat on its mooring, jump in the van, and head east down the A38 to Plymouth.

Since the yard of gear supplier and trawl manufacturer MarineCo is at Saltash (the Cornish side of the river Tamar), it is often a perfect coffee-stop for me. I left there a few hours ago, having learned a lot.

I have known head of the MarineCo business, Chris Dinham, and head of its trawl division, Clive Palfrey, for over three decades, well before they joined MarineCo. I have witnessed both men weave through their trades to become leaders in their present roles.

Clive Palfrey is an ex-trawlerman; the first time I met Clive was during his days as a young deckie working from Looe. Going back 31 years (1997), Clive worked on the Looe day-trawler Briagha-Mara (skipper/owner Richard Newman), which I visited to study and report on small-boat pair-trawling – the pair-boat being the Cazadora (skipper/owner Chris Newman, brother of Richard). 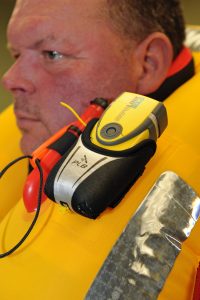 A PLB comes as part of the package on a Mullion Safelink Solo Compact 150 Supreme.

I quickly saw two under-10s making a fair living from burning a thimble-full of diesel, and captured pictures with whiting a-plenty. Just one tow proved that two small vessels could reap rewards from pair-trawling.

Neither Clive nor I had any idea that 12 months later, on 19 December, 1998, Briagha-Mara and Cazadora would blunder into the biggest-ever pay packet for one day’s work. Ten tonnes of bass – £66,000 for one day – was sold on the last market at Looe before Christmas. It remains the bass record for that port; Clive and the other crewmen walked off the boats with a day’s earnings that few will ever beat – £5,000.

Clive later owned his own under-10 steel trawler, Lunar Beam, and skippered one of the most advanced under-10 Cygnus GM33s of that time – Faith SU 513. I shared his company to write new-boat reviews on both vessels.

However, fathoming out just how the geometry of trawl nets could determine the efficiency of the gear fascinated Clive, and his days as a trawlerman were to end. Clive had met one of the most advanced Westcountry net-makers – trawlerman Stan Stanley, based at Plymouth. Stan became Clive’s mentor. The rest is history; Clive stepped ashore to become one of today’s leading trawl-makers.

The point of visiting Clive today had been to chat about trawl gear. It always takes a while to explain trawling to a line fisherman (like me), and a cup of coffee oils the works. While chatting, I saw a personal locator beacon (PLB), with a white tab saying ‘DEMO’, identical to mine. “I didn’t know you sold that stuff at MarineCo,” I said.

“Of course we do. We are agents for Mullion lifejackets, and sell all sorts of safety gear,” he answered, which triggered me to moan about a couple of old Mullion lifejackets that I have. I just cannot pack the bladders back into the dumb-bell cover without using some force. All lifejackets go off unexpectedly, but repacking is important.

Clive is a long-serving lifeboat man, and as the coxswain of the Looe inshore lifeboat, who better to give advice on lifejackets and safety at sea?

He said, “We have always sold lifejackets and safety gear, and in 2017 coupled with Seafish and Mullion lifejackets. MarineCo got involved with the Plymouth City Council lifejacket project – I’ll show you the latest Mullion jacket, Mk VIII, on which that project is based.” 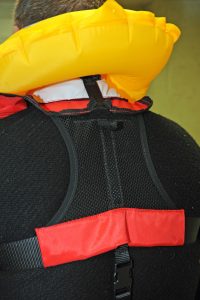 A mesh panel is fitted to pull the rear further away from the neck, and Mullion has widened the top of the dumb-bell jacket, and fitted a neoprene-padded section for comfort.

Having now seen and handled a Mk VIII Mullion lifejacket, I’m not surprised that feedback from fishermen is good.

With local council and government funding, Mullion and MarineCo have together helped a safety campaign to provide free lifejackets to 250 local fishermen.

Clive pulled the cord and triggered that lifejacket, and fixed to it was a PLB. Until now, I had thought that were I to fall into the water, by having a PLB I had a very good chance of coming home. But the raw truth is that my PLB was well out of date, and I didn’t really know enough about it to trigger it; I thought it went off automatically. And I never carried it attached to me, believing that I would have plenty of time to grab it.

On hearing me admit that my PLB is now somewhere on a shelf at home, he showed me how to set one off – you don’t just flip the top open, but pull it with a degree of force. “A PLB is not an EPIRB, and will not trigger automatically,” he said, adding that I should have known that. I agree.

When the top is removed and the flat-blade antenna quickly unfolds, transmission begins, and – as long as you keep it attached to you – a lifeboat and/or helicopter has an almost 100% chance of finding you. Clive remarked, “Getting you back alive is far easier than getting you back dead.”

He showed me the battery-check button, adding that although replaceable, the cost of battery replacement and servicing is almost as much as buying a new PLB.

But the shock that prompted this Inshore Corner was Clive’s face, when I asked how many of his lifeboat ‘shouts’ had strengthened his belief in PLBs. He told of an incident when the search was successful, but what they hoped was a survivor became a body. “That happens all too often,” he said.

“When we dragged the body aboard, he was a fisherman, and I knew him. Two days previously, we had been sorting out his order for a new set of wires; we were joking and having the normal banter between fishermen. The most shocking thing is that if he had had a PLB, we would have found him in a very short time, and he would have had a good chance of coming home alive.

“I’m sure I speak for all other lifeboat men: we will do anything within our power to find you – yes, we will find you, but at least give us a chance – wear a lifejacket, and if possible, have a PLB. 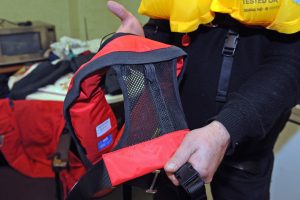 The netted section not only pulls the neck section away from the skin, but spreads the overall weight of the jacket.

“In the Plymouth City Council lifejacket project – where the council obtained funding to supply each of 250 fishermen with a lifejacket and a PLB – we gave those fishermen training on sea survival, and the project has definitely increased awareness. We have set up a Mullion service station, and have two designated service engineers.

“We have tried to get other councils and regions to promote safety to their fishermen, and we believe that moves are afoot to unlock EU grant aid for such projects. Although a scheme to get as many of their fishermen as possible to wear a lifejacket has been proposed by many local councils, so far only Plymouth has carried it out.

“We need to get as many councils as possible onboard to promote safety at sea, and to do so as soon as possible. As lifeboat men we have the best available technology, and from computer models of previous shouts, we can almost calculate the time it will take to find you. It is mathematics, not rocket science, and if you have a lifejacket, we will find you. Whether you will be alive or dead is down to many factors, but with a PLB, you have a far greater chance of coming back to shore alive.

“The last shout I heard of was a canoeist in Falmouth Bay, when the lifeboat was alerted just four minutes after the PLB was set off. At present, there are 13 search and rescue (SAR) satellites around the earth – satellites from which the PLB signals bounce – but by 2022, there will be 80 such satellites, devoted solely to PLBs and EPIRBs.

“An inshore lifeboat (RIB) takes 10 minutes to launch, and at top speed will do a mile in two minutes; an all-weather lifeboat does 25 knots, and takes 10 to 15 minutes to launch. When you activate a PLB, those operations begin immediately, plus SAR helicopters are launched if necessary. With a PLB, we are not working on third-hand information – you can calculate pretty accurately how soon we will be there. Don’t underestimate the effectiveness of a PLB.” 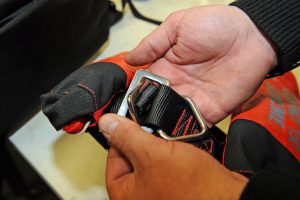 Plastic buckles have been replaced by stainless steel buckles, with a D-ring added as well.

Clive’s ceaseless energy to promote safety at sea is evident, and I hope I never meet such a lifeboatman face to face when he’s doing his job. However, in this Inshore Corner I will at least try to help him take back a survivor, not a body. A new Mullion lifejacket with a PLB is not cheap – so for me, perhaps less cider and more sense is the answer! I bet I pay over £150 per month for cider. Not any more.

The latest Mullion lifejacket has significant improvements. As a result of feedback about earlier versions distributed in Seafish safety projects, the end product – the Mk VIII – is a jacket aimed specifically at fishing.

Clive Palfrey said that recent feedback from fishermen using such jackets is both vital and welcomed. He explained, “The reason we at MarineCo like Mullion lifejackets is that once Mullion decides to serve a particular part of the marine industry, it gets seriously involved with that industry to develop the best possible jacket for the needs or conditions faced within that industry. Fishing is no exception.” 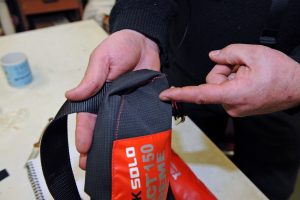 To reduce or eliminate rubbing from pots or other gear, Mullion has incorporated a wear panel at the base of the jacket.

Called the Safelink Solo Compact 150 Supreme, it comes complete with the Mullion PLB, and the jacket is Mk VIII in the Seafish-promoted range.

There were reports on previous Mullion jackets about the wear from chafing by crab pots, so a strong anti-chafing material covers that area. 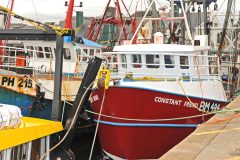 Plymouth continually hit by poor weather in first quarter of 2019 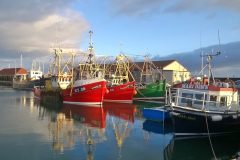