On a recent visit to Brixham to see several boats in various stages of refit, I visited the Galmpton boatyard to meet boatbuilder Bobby Cann. He and his workforce of six are taking part in the refits.

Since each boat is nothing short of history wrapped in either wood or GRP, I have chosen to focus on three. The wooden 13m potter Superb-Us DH 99 and the wooden 16m Excel DH 17 are both iconic in the Westcountry potting fleet, and are based on one of the first Napier 29 hulls ever built, the GRP potter Nil Desperandum DH 390. Superb-Us was built in 1964 at the Mashford yard at Cremyll. 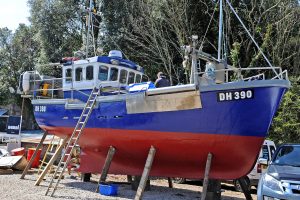 For a vessel under 30ft in overall length, the Napier 29 has huge potential to equal a much bigger craft.

Here’s the first of three Inshore Corners about those boats. Each vessel is legendary in both design and build, each being built a long time ago, yet each is packed with modern technology. ‘A long time ago’ must be taken in perspective – during his apprenticeship at J Hinks & Son at Appledore, Bobby Cann remembers working six days a week to get the Excel finished. The demand for that style of boat was huge, he explained.

As far as the two wooden boats are concerned, a like-for-like new-build may raise the eyebrows of any bank manager. However, Bobby Cann repeated his long-time wish that he and his men could easily build whatever wooden boat a skipper wants, adding that although, in boat construction, steel is presently in favour, in the long term the use of wood is equally competitive, and there are still craftsmen capable of such a task.

Indeed, from my own experience there are a growing number of youngsters serving apprenticeships in the building of wooden boats, albeit for the manufacture of expensive copies or rebuilds of traditional yachts, but at Gweek Quay boatyard, just a couple of miles from me, I often spend time admiring skills that, to me, are a work of art.

Known by local fishermen as ‘down at Galmpton’, the yard of Dartside Quay Marine Service Centre, the scene of the three refits I have chosen, is located a stone’s throw from the South Devon village of Galmpton. Close by are the ports of Dartmouth, Salcombe and Brixham.

Boats from a wider area often choose the yard, and within its boundaries, Dartside Quay Marine Service Centre has considerable open space for refits and/or storage. Although self- or subcontract work is the normal choice, there are also a host of onsite skills, sales and services. A boat hoist capable of lifting up to 65t is also available. Skipper Jody Channer would not change his Hydroslave hauler – a unit that few would surpass, he said.

You don’t see many new Napier 29s around nowadays, but I have sailed on three Napier 29s, the first trip being aboard Broadsword FH 145, which was originally built as a multi-purpose static-gear boat. Hand-line fishing for mackerel was a large part of its duties, but I understand that for a short time, the Broadsword of Mylor became a wee scalloper, towing a small number of dredges to work the edges of shallow rocky outcrops, with some success.

Other trips I spent on Napier 29s included several on the now-decommissioned trawler J-Anne BRD 92. Later, I spent a few days aboard the netter/potter Sarah Beth PZ 1.

A couple of those trips occurred in poor weather. Each skipper praised the sea-keeping qualities of their Napier 29, and I strongly support that opinion. They are fine craft in all respects.

Somewhere in my collection of old pictures I have slides of the first Napier 29 being lowered into the river Severn near Worcester – a strange place to build boats destined to face the open sea, I hear you say.

However, the idea to introduce a new style of displacement boats like the Napier 29 (and later the Napier 36) came way back in the late 1970s, from one of the three original owners of Cygnus Marine Ltd. He moved to Worcester, and started his own business, Bryce Waterhouse Marine. I’m not sure whether the Napier 29 was introduced as a competitor to the Cygnus GM32 or the Holton 32, but it certainly became a serious alternative to either.

There is nothing much (if anything) that can’t be done on a Napier 29 that can be done on a GM32 or Holton 32.

Bryce Waterhouse Marine built the Napier displacement vessels for several years, before closing down. On its closure, I believe that the Napier 29 mould went to Aquastar in Guernsey. From then on I’m not sure of the history; however, thankfully the mould is still in use, and in the hands of Gearoid Fitzgerald, the boss of Fitzgerald Marine near Kinsale in Co Cork, Ireland. A new Napier 29 left the yard a short while ago. 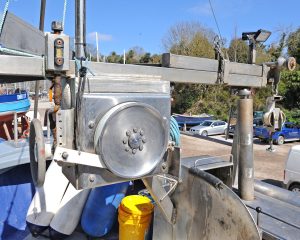 The traditional davit arm and block have been kept in place to make untangling easier if the gear bundles up on the seabed.

On first sight of a bare Napier 29 hull, you might want its flat-looking for’ard gunwale-line to be raised from the midsection to the bow, to give it a bit more freeboard. Not necessary. Once fitted out, the Napier 29 has very distinctive and pleasing lines; it is a really deep and stable boat that (to me) spells safety. It would take a nasty sea to shake a Napier 29.

Skipper/owner of the Nil Desperandum, Jody Channer, said: “About five to six years ago, we had a wave come over us; perhaps we shouldn’t have been out in weather like that. The wave hit us from the worst possible angle. It filled the deck, but she just sat there; she wallowed a bit for a few seconds, but the water drained through the scuppers quite fast, and all through, the boat didn’t falter. One would be hard-pushed to find a better sea boat, measuring under 30ft in overall length, than the Napier 29.”

Nil Desperandum arrived at Dartside Quay Marine Service Centre some weeks ago. Its engine, engineroom, fuel, bilge pump and deck-wash systems ‘needed a bit of TLC’, I was told – and after a truly major refit, this inshore boat is now as good as new.

Skipper Jody Channer said, “When I first saw the boat, it was in Grimsby and was called Garland Stone; it was registered in Milford Haven. The Grimsby owners hadn’t had the boat for very long. On first sight I knew it was what I wanted; I saw the potential. I brought the boat back to Devon, carried out a refit, tidied it up a bit, and soon after, renamed it Nil Desperandum.”

Each year, the Nil Desperandum has had a refit, and stage by stage, the boat has improved to its present self, with a sizeable aft wheelhouse and a stainless steel roller system, which took the place of a stainless steel traditional davit arm arrangement.

“I’ve still got the davit arm and hanging block in place, to help if we have a bundle-up of the gear, but I wouldn’t change the roller system, and I think no one who has tried a roller system would ever go back to using a traditional davit arm,” said Jody Channer. “Sometimes I think the roller system is a bit quicker than using the davit arm, sometimes the other way around, but whatever, if it saves your back, that’s the main factor, and if I hadn’t had the roller system fitted, in the winter of 2013, by now I would probably not be fishing.”

Nil Desperandum’s entire fuel system and engine have been replaced. At present, the deck arrangement remains the same, with a baiting table and shooting ramp delivering the gear over the reduced-height section of the mid-starboard gunwale. However, Jody explained that, quite soon, a purpose-built shooting door might replace the ramp.

He added that removing the old steel fuel tanks – each weighing 200kg when empty – was a huge task. Fitting the new, lighter, stainless steel tanks was one of the many tasks carried out by AK Marine Services Ltd, a firm owned and run by Aidan Kelly and Warren Dart, the headquarters and workshop of which are located at Dartside Quay Marine Service Centre.

Aidan and Warren removed the 75hp Ford Dover engine and carried out a total rebuild. Basically, from the engine, fuel lines, filters and fuel tanks, everything is now new. Racor filters, glass-topped strainers and fire-retardant hoses were used, and in all, no expense has been spared on the Nil Desperandum refit.

Also, the vessel’s shaft was drawn, with the stern gland seals replaced, and its propeller was rebalanced and refurbished by a local firm.

Skipper Jody Channer added, “All hydraulics are driven straight from the gearbox. I have a Hydroslave hauler, all constructed in stainless steel, and I now wouldn’t have any other make of hauler. The wear plates on a previous hauler had to be replaced after a very short time. That became costly in lost time. The Hydroslave hauler was fitted three to four years ago, and still has the same wear plates.

“Regarding the Napier 29, it’s a very deep boat. A lot more hull is under the water than, for instance, on a boat three feet longer, like the GM32.

“Hopefully, this refit will see me through for several years. It’s just nice to be at sea when you know everything in the engine and fuel system has been fully replaced. There was no point in replacing the engine; it is a really good engine, and technically, it is now as good as new.” 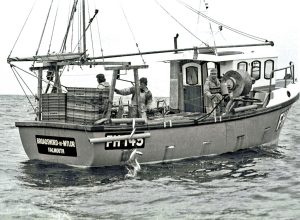 Broadsword of Mylor in the early 1980s. The Napier 29 would become known as one of the most efficient boats of under 30ft in overall length.

He added, “Jody Channer came to us saying that he wasn’t happy with his engine – it wasn’t running quite right – and asked us to take it out and rebuild it and, in addition, take out the old fuel tanks, the bilge system, the deck-wash system, all the piping systems and fuel line, filters and strainers, and replace everything with new.

“We specialise in this sort of work, and are often involved in several refits on fishing vessels. The engine was re-bored, new pistons were fitted, and the crankshaft was checked, so it’s now a new engine – it even had a new coat of paint!

“With our workshops being at the yard, we are able to provide a quick turnaround on fishing vessels. We are aware of the cost of lost fishing time, and will do everything we can to reduce that loss.

“We are agents for both Nanni Diesel engines and equipment associated with the Nanni range. Nanni engines are not only leisure-rated; they have an impressive line of commercially rated engines and provide considerable potential for fishermen, giving a long life of hard work. 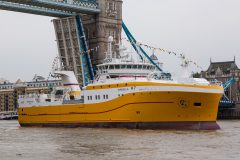 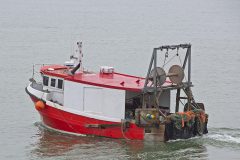