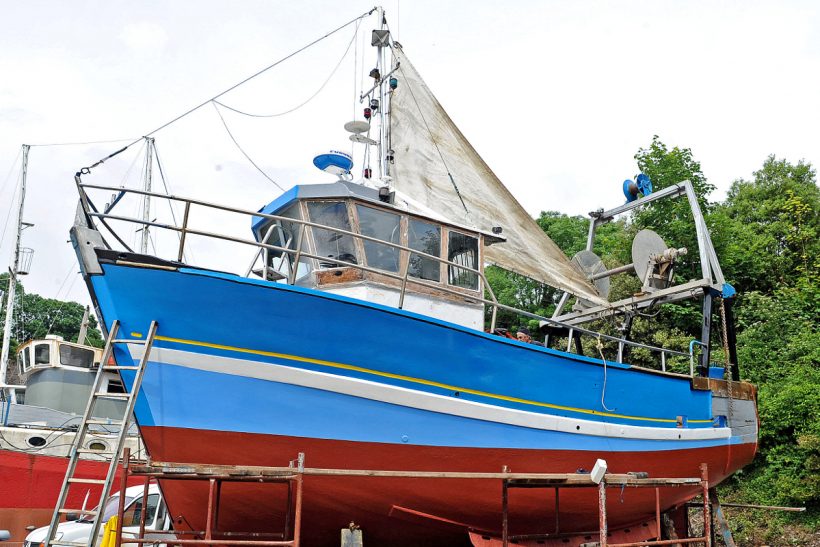 ‘What a picture, what a photograph’

It was built at Paimpol for a Guernsey skipper and was here (in Guernsey) for a good few years before going to Jersey,” replied Micky Guille, just minutes after I recently posted a couple of pictures of Adela on my Facebook page.

I received many more comments about the life of the one-time potter. ‘Steve (Black) Knight had her for years, Phil, a cracking little boat’, wrote Ian Taplin, and I couldn’t agree more. Adela – a girl’s name with Old German origins, meaning ‘noble’ – began its life as the Violettes du Sud.

Being a regular sight in Brixham’s inner harbour, many passers-by stop and gaze at the under-9m Adela’s flared-bow Breton lines. For many years, I too have admired Adela and quietly wished that the boat might one day be mine. I still have that thought, but at my age I should know better. 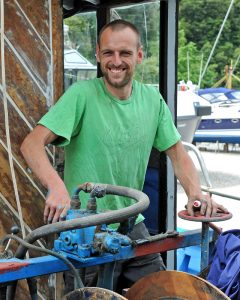 Skipper Tristan Northway, while busy on the recent refit.

By wobbling up a ladder onto the deck of Adela, I recently had the pleasure of meeting its new owner, skipper Tristan J Northway (33), who together with its previous owner, skipper Steve Baker, was busy completing a big refit at Dartside Boat Park in Galmpton near Brixham. Steve Baker has owned and worked Adela for 28 years.

After the replacement of short portions of a few aft planks, new rails in places, and considerable work to smarten up the wheelhouse, Adela now looks handsome.

I can remember the first wooden Breton boat that I studied in detail, the St Mawes trawler Tyroca. A few moments of photographing the Tyroca stirred within me a love of the Breton style, and for over 30 years I have wondered why our designers have not copied, or at least drawn a general arrangement, close to those Breton lines. However, after the Cygnus Marine GM32 faded in popularity, the GM33 had a ‘tweak’ of Breton style.

“Finer wooden boats than those made in Brittany have never been built,” say many West Country boatbuilders and fishermen. Try the Facebook page of Petite Pêche du Nord Bretagne, where similar boats are often posted, and the following is huge.

With a private backer, by December this year skipper Northway will fully own the Adela. He has already painted his nameplate on the bow, reading TJN – Tristan Jowett Northway. He knows the Adela very well; for the past two years he has skippered the vessel.

But his quest to one day own Adela goes back a long time before that – ‘about 17 years ago, I think’, he told me. “Adela was the first boat I seriously went to sea on. As a kid I watched the fishing industry at Brixham and wanted to be part of it. I can remember that first day I spent on the Adela; I was seasick for the entire day, but at the end of that day I still wanted to go back again. I worked on many boats, and after about six months I finally got over my seasickness.”

I first met Tristan some years ago – but I couldn’t remember where or when. I didn’t like to ask, but I didn’t need to. “I remember you coming with us for a trip on the Goldfinder PZ 77, when I was the crewman for skipper Nico Looze,” he said.

I remembered taking those pictures – shots to capture a rare sight of safety at sea in action. Skipper Nico Looze and his crew always wore lifejackets when on deck. Sadly, even today few fishermen do that. Wearing a lifejacket while on the Goldfinder was a rule, and rightly so. 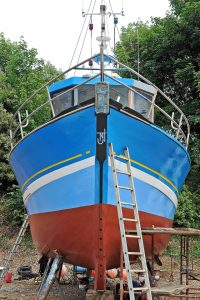 Adela’s bow now carries the TJN logo. Note the flared bow that many UK skippers would like to see on new builds in Britain.

Tristan’s journey through commercial fishing began in the early 2000s, when the rush to have new boats built began to slump. Although the UK avoided much of the world recession that was taking place then, UK money markets suffered, and funding to prop up the fishing industry was hard to get.

Brixham had already built up a sizeable fleet, and after his first encounter with Adela, Tristan gained considerable experience by working on a range of bigger boats – 50ft-long Brixham day boats, and beam trawlers too – yet his love for small-boat trawling remained. He’s even pencilled out the layout for an 8m steel trawler, believing that in future the U10 fleet might be divided into up to 8m LOA, and 8m to 10m – and I agree.

Many years ago, I heard of plans by the authorities to clip the wings of the high-powered U10 rule-beaters, and by doing so allow them to join the POs and thereby marginally take the strain off non-sector quotas. Many designers of small boats were aware of that possible change, and I saw a few impressive U8 drawings, but the market for new builds was ‘tender’, to say the least, and as far as I’m aware, no builds went ahead.

But imagine a shortened version of the Buccaneer 28, or a modified version of the little-known but superb craft, the Napier 29; it wouldn’t take much to bring such boats under 8m in length, to provide the basis of a true inshore trawler. For many years, ‘Grimmy’ Mike Mahon of Newlyn (now retired) successfully ran the Napier 29 trawler, J-Anne BRD 92. Tristan told me of his ‘wish list’ – a beefy 7.99m steel trawler, one that he already has drawings of.

To say that Adela is immensely strong is about right, and on my Facebook page its keel was described. “That’s one hell of a keel, Phil, just the branches were removed and the whole tree was used,” posted Graham Pulman.

Rumour has it that in the late 1960s, the yard owner in Paimpol had bought enough woods to build a 40-footer, but the order was cancelled, so he purchased more woods and eventually built two identical boats, Adela being one. You should see the distance between the frames above deck; I was told that the frame spacings below deck are even tighter.

Tristan explained his reasons for staying within the small-boat sector. “From about 17 years of age, I briefly went onto the bigger boats, like beam trawlers and scallopers, but big boats just don’t ‘do it’ for me. I have worked on many of the Brixham day boats (50ft), and that was better. I got valuable experience from every boat that I worked on, but I hoped that one day I would own a small trawler like the Adela, and work it single-handed.”

Tristan is now even more aware of the dangers at sea, because as skipper of the day boat Guyona BM 1, on 23 June, 2008, he and his crew experienced a sinking that took place on the fishing grounds south of Little Sark in the Channel Islands. With little, if any, warning, the incident began at approximately 4.30pm, when the scallop dredges came fast. Just a few minutes later, Tristan and his crew were in the water, trying to reach the liferaft; thankfully, they succeeded. Neither was wearing a lifejacket.

He said: “The gear came fast, and we tried to prevent anything happening, but the boat went over. Eventually, we got into the liferaft, and in the end we were OK, but naturally we were shocked. However, not long after the incident, I wanted to get back to sea. First I worked on the beamer Sara Lena BM 30, then on the day boat Gerry Ann C TH 257, then back on the Kerrie Marie BM 172, where I had spent time before. Then I went back on the day boats, and stayed until two years ago, when I went to the Adela.

“As a kid, from the first day at sea on Adela, I fell in love with trawling. For most trawlermen it isn’t a job, it is a way of life.

“I work single-handed and love it. Even when the weather is poor, it is lovely to be out there towing a net, with no boss to answer to, just doing my own thing. I’m not a follower, and often go well away from tows that some skippers stick to day after day. And I don’t do four- or five-hour tows; I do three hours at the most, but normally two and a half hours. I want my fish to remain in prime quality, and I might soon look toward direct sales for part of the catch, but most of my fish will still be sold through Brixham Trawler Agents (BTA). Like some other Brixham fishermen, I’m pleased to hear that there might soon be a clock auction at BTA.”

In the second part of this Inshore Corner, I will look at the technical side of the refit. 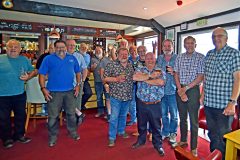 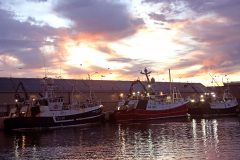 Quality and efficiency to the fore in new Peterhead fishmarket