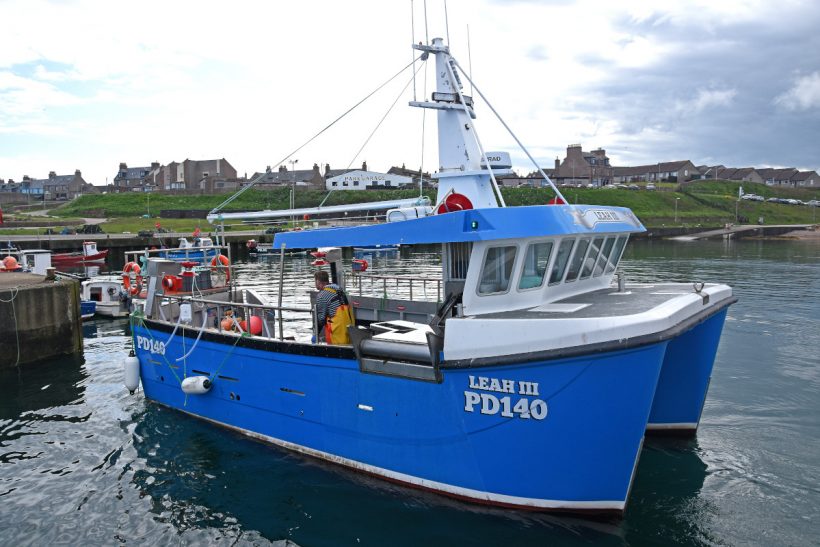 Having taken the decision to replace his previous boat, the Cygnus 21 Leah II, with a new-build suitable for working further offshore, David Buchan considered various options that would best suit his requirements, including fishing capabilities, seakeeping qualities and personal safety. 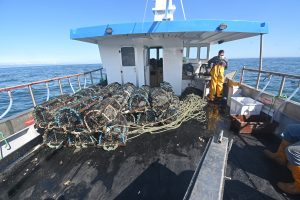 Initial contact with Chris Anderson of Anderson Marine led to the Peterhead boatbuilder supplying a set of mouldings for a Gemini 10 displacement hull.

While the GRP hull was being moulded to Seafish Stage 1 classification, David Buchan started with a blue-sky approach and used his experience as a skilled engineer and a hobby static-gear fisherman to draw up plans for the internal arrangements of the new build, together with its various drive systems and associated equipment specification.

The highly impressive end result bears testament to the countless hours of dedicated effort that David Buchan, together with his father, David Buchan Snr, and friends, put into the completion of Leah III.

This process was helped considerably by Chris Anderson’s willingness for Leah III to remain in Anderson Marine’s boatbuilding premises until the catamaran was at an advanced stage of completion and ready to go in the water.

Skipper David Buchan said: “From first contacting Chris Anderson, he has been extremely helpful throughout the project. The build quality of the GRP mouldings is first-class, as was the level of practical support he provided subsequently, which was a big help and very much appreciated.” 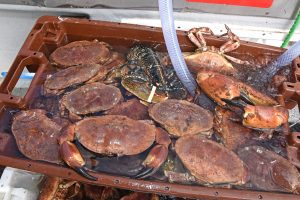 Flexible piping is used to keep boxes of shellfish in optimum condition on deck.

Further evidence of the level of thought that has gone into the high-spec build is apparent when the rubber deck covering is rolled back to reveal that vivier holds and seawater ballast tanks are fitted in each hull sponson.

Maintaining a well-established family tradition by being named after David Buchan’s sisters Leanne and Deborah, Leah III will work from the inshore boat pontoon in Peterhead’s Port Henry basin, at the same time as frequently leaving shellfish keepers in Boddam harbour.

When fishing several miles off the Buchan coast down to 40 fathoms, skipper David Buchan will work mainly 24in D-section double soft-eyed creels, supplied by Swan Net-Gundry. Rigged on 14mm-diameter backropes and 12mm-diameter tailings and strops, also sourced from the Killybegs company, these will be worked in leaders of 40.

In addition to grounds further off, David Buchan will continue to fish traditional wooden-based creels, made by his father David, along the shore from Boddam south to Cruden Bay, previously fished with Leah II, which now fishes from Peterhead as Auriga, having been bought by Joseph Wyness. 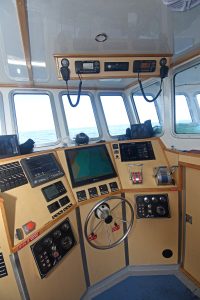 In the coming weeks, Leah III is also expected to engage in the inshore summer mackerel fishery, should this unpredictable and flighty species make an appearance.

If and when this occurs, skipper David Buchan will bring into play two Belitronic jigging machines, mounted towards the quarters above the stainless steel safety rails.

From the reels, the lines lead forward to two free-running rollers positioned on the wheelhouse roof, from where they double back to a second set of rollers located outboard above the mackerel strippers. The strippers are positioned on the end of short fish chutes, pivoted in line with the gunwale so that they can be lifted upwards and inboard through 120° when the vessel returns to port.

Leah III is designed for single-handed potting. Particular emphasis was given to maximising safety and ease of working arrangements, which are focused on a self-hauling and shooting system.

Pot-hauling duties are handled by a 1t Seawinch 16in-diameter hauler, inclined at 45° to the vertical inboard corner of a strongly fabricated stainless steel receiving table. Incorporating a bait trough, the aft section of the clearing table is continued aft and set in from the rail, forward of where the customary set of duplicate engine controls is positioned. 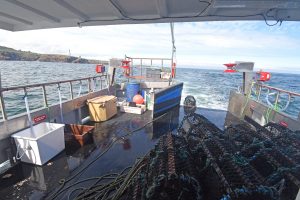 A wide self-shooting opening is arranged to port.

Backrope falling clear of the hauler onto the deck is kept away from skipper David Buchan’s working position by a vertical panel, to enhance working safety.

David Buchan reported that Leah III is extremely easy to retain in position relative to the backrope when hauling the gear.

Integral stainless steel flanges and rollers are fitted at each end of the large-diameter gunwale-mounted roller to retain the backrope, and guide the creels aboard.

A wide self-shooting opening is located in the port side of the transom stern. The opening can be sealed off by a strongly constructed hinged door. When in the open position, this forms a funnel guide to starboard.

Creels are usually stacked in rows two high and four wide along the port side, before being self-shot.

A stainless steel cradle fitted on the starboard side of the transom provides additional storage facilities for empty boxes, etc.

A wireless, remote-controlled landing derrick and winch are mounted on the wheelhouse roof, to give flexibility when landing boxes of brown crab or mackerel. 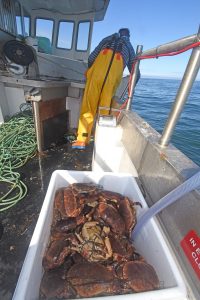 Brown crab is expected to be the main species landed by Leah III.

Skipper David Buchan gave considerable thought to both the location of the internal bulkheads positioned in the hull sponsons, and access to the forward enginerooms.

While the port engineroom is easily accessible through a hatch in the floor of the wheelhouse, achieving this to starboard initially gave a bigger challenge, due to the fact that the engineroom is situated directly below the pot-hauling position.

After considering various permutations, including a hinged clearing table, a means of providing access from the wheelhouse via a door in the starboard side, which also leads to the forward accommodation cabin, was designed and put in place.

Leah III is powered by FPT N67 six-cylinder engines supplied by Mermaid Marine. Derated to deliver 68kW at 2,150rpm, the engines are coupled to Twin Disc MG5050 3:1 reduction gearboxes. Trolling valves are fitted to both gearboxes to enable Leah III to steam slowly when jigging for mackerel.

The Vetus steering gear was sourced from ASAP Supplies.

The quality of workmanship evident in the installation of the propulsion, hydraulic and vivier-pumping systems reflects both David Buchan’s engineering skills and the time he devoted to the fitting-out of Leah III.

Three pumps serving the vessel’s dual-drive hydraulic and vivier systems are arranged across the fore end of the propulsion engines.

Twin centrally mounted Galtech pumps deliver optimum efficiency to the hydraulic system. This dual arrangement ensures that maximum hydraulic power can be delivered to the pot hauler by both engines when conditions require this, particularly when Leah III is potting in deeper water off the shore, as well as making it possible to run the hauler at half speed from one engine only. 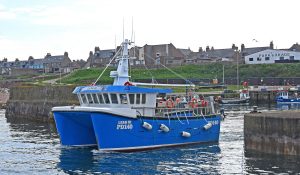 Leah III heading out of Boddam harbour after dropping off a keeper of brown crab.

Two electrically driven JMP 1.5in clutched pumps, supplied by Macduff Diesels, supply the vivier tanks fitted in each hull. Piped throughout with stainless steel, the constant circulation seawater systems, which also operate the water ballast tanks, incorporate changeover valves to facilitate the required mode of operation at any time.

Stainless steel 1,200-litre-capacity fuel tanks are positioned on the foreside of the bulkhead between the enginerooms and the vivier holds.

With the wheelhouse offset to the port rail, the steering position is almost on the vessel’s centreline, and therefore provides a commanding view at all times.

All-round vision is further enhanced by the presence of two display screens mounted on either end of the forward navigation console. Together with CCTV cameras, the screens enable skipper David Buchan to watch a leader of creels being self-shot off the deck without the need to constantly turn round. 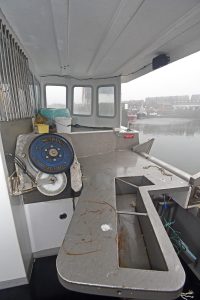 The port side of the wheelhouse is extended aft to give a walk-in heated deck clothing storage area, in which a toilet and washbasin are also fitted.

Fitted out with light-coloured wood laminates and hardwood facings, the wheelhouse was finished to a high standard by David Buchan Snr, who also made the well-padded skipper’s seat.

The comprehensive package of electronic wheelhouse equipment, supplied by Echomaster Marine, was installed by Peter Buchan of Fortitude Marine.

A Simrad radar and PP60 autopilot system are also fitted, together with two Icom IC-323G VHFs.

A small fleet of inshore static-gear boats fish out of Boddam harbour, which is located just to the north of Buchan Ness lighthouse and southwest of Skerry Rock. The Peterhead breakwaters lie a mile to the north across Sandford Bay.

Leah III heading out of Boddam harbour after dropping off a keeper of brown crab.

Given this exposed location, it is understandable that a number of mainly single-handed skippers opt to work out of their local harbour, which enables them to often start fishing within just a few minutes, by eliminating the considerably longer time it would take to come from Peterhead.

Although Boddam skipper David Buchan regularly goes into Boddam harbour, either to land or to leave shellfish keepers, the extreme levels of surge experienced during poor weather from the north round to the southeast means that boats like Leah III cannot be moored there permanently.

Boddam has a long history of inshore fishing, including local salmon bag-net stations until these were stopped in the 1970s. Boddam is also the home of a number of well-known Peterhead-based whitefish skippers, present and past.

Before a harbour was constructed north of the lighthouse in 1931, more than 20 locally owned boats were reported to have been hauled up onto the rocks when engaging in haddock fishing in the spring and early summer months, before changing over to herring from July to September.

Lord Aberdeen added another harbour in 1842, which led to a significant increase in the size of the local fleet.

By the 1870s, upwards of 150 drifters were using Boddam harbour at times, where more than a dozen herring curers were resident in the village. Although the harbour was widened in 1878, Boddam started to decline as a fishing port as nearby Peterhead began to reap the benefits of a larger harbour. 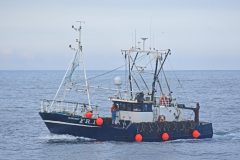 Boat of the Week: Radiant FR 10 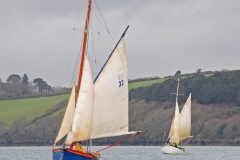