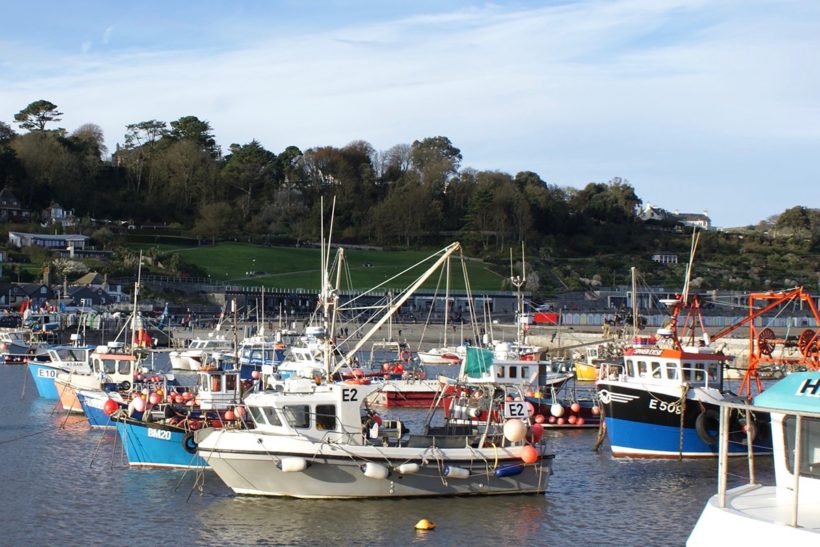 Despite its image as a picture-postcard resort, Lyme Regis in West Dorset is bucking the south coast trend, with a thriving and diverse inshore fishing fleet and new young blood joining the industry.

The famous Cobb – the backdrop in John Fowles’ novel The French Lieutenant’s Woman – was finished in 1826 and forms the southwest arm of the harbour, while the North Wall, running out from the beach, protects from the east.

Being sat in the heart of Lyme Bay creates its own problems with the weather. In the extremely stormy winter of 2014, Lyme Regis was regularly featured on national news, with massive waves, over 30ft high, crashing right over the top of the Cobb and swamping the harbour. Some of the larger fishing boats had to shelter in Exmouth for fear of ripping the mooring bollards off the quay.

Until recently, the town had its own harbour master, but in the 2019 local government restructure, Dorset Council took over the running of the port, and James Radcliffe, harbour master at West Bay, 10 miles to the east, was also tasked with overseeing Lyme Regis.

The council is keen to see a balance between leisure craft and commercial operators in the harbour, and has 15 moorings permanently allocated to fishermen and tripping boats. This works well, with the harbour team understanding fishermen’s needs and arranging moorings accordingly. 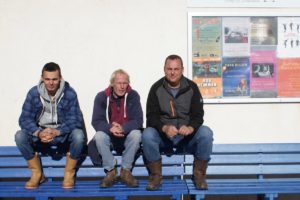 The presence of Lyme Regis Fishing College, housed in buildings on the Cobb, is a major factor in maintaining a strong sense of the importance of fishing from the port.

Diversification in fishing methods through the seasons has been another key factor in keeping the fleet alive. With such varied inshore grounds, no one fishery has taken precedence. In the 1960s and 1970s, quite a few of the smaller boats were, at times, inshore trawling for sole and turbot, but this has given way to the majority of boats working static gear.

The Lyme Bay Fisheries and Conservation Reserve, which runs from east of Bridport, past Lyme Regis, to Beer Head in the west, now has a no-tow policy.

Potting for crab and lobster has always played an important part in the local fishery, but with the rough ground in the area being very patchy, smaller strings are worked than further along the coast to maximise efficiency.

Whelking has always been part of fishing out of Lyme Regis, but not to the extent seen in recent years – Far Eastern market demand, increasing the price of whelks, has definitely fuelled increased effort in the area.

Up to that point, whelks were only a bycatch or ‘add-on’ to lobster and crab fishing, and were mainly sold from local shellfish kiosks. However, reduced exports due to Covid have forced a lot of the whelk effort to switch to netting until markets improve.

Matt Styles, a youthful and enthusiastic fisherman, has worked out of Lyme Regis for the past 11 years. Matt started his career skippering mackerel tripping boats, and then moved over to commercial fishing. He runs the 21ft Cygnus Antelma E 201, inshore trammel-netting for Dover sole and ray. Whelking makes up a part of Matt’s catch, working 200 pots, but with market issues, the viability has become difficult to rely on.

Matt also has the Antelma MCA-coded for seven people, allowing diversification into the staycation tourist market, running trips around the bay. His next aim is an upgrade to a Cygnus 26.

The newest addition to the Lyme Regis fleet is the Buccaneer 33 trawler Hannah Marie BD 33. Set up for twin-rigging, she came to the harbour in August this year. The boat is a three-way venture between skipper Oscar Fearnley-Derome, Mark Dack and Stuart Wain. 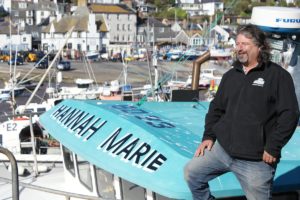 All small ports have family names synonymous with the local fishing industry, and Lyme Regis is no exception – the name Wason stands four-square around the harbour. The family have fished there for well over half a century.

John Wason, his three sons Paul, Barry and Chris, and Paul’s son Luke have all worked out of Lyme Regis, although John is now very much retired.

Paul started in 1966, aged 11, in an 18ft clinker-built boat, the Jellyfish – aptly named, he says, as she was so loose-nailed, her 5hp Britt petrol engine used to wobble her to bits at half throttle. Paul never saw a problem in this; he was forward-thinking. Whilst a couple of the other local lads worked a few pots, Paul was prawn trawling!

He towed a 6ft beam trawl behind the Jellyfish, up along the North Wall and in the harbour entrance. His best day was 40lb of prawns and 4st of Dover sole – at £1/lb for prawns and £8/st for Dover sole, he was a happy boy.

At 15, Paul went on to skipper his father John’s 48ft sidewinder Barbarella, which was built in Bideford to the same pattern as three other boats fishing Lyme Bay. At the time, he was the youngest skipper in the fleet.

After a while, John Wason, looking at the expense sheet for the Barbarella, decided to replace her with the stern trawler Frank Robert, which was fitted with a 150hp Rolls-Royce engine – only to find she burned twice as much fuel.

Paul carried on skippering for his father. They bought the French sidewinder Why Not, powered by a three-cylinder air-start Baudouin. There was always a real art to starting these engines – simply losing the air could mean a day ashore and lost fishing – but, when running, they were great workhorses.

Paul then went on to own his own boats, firstly the 24ft clinker-built My Guide, which amongst other things was used for spratting in Lyme Bay. The authorities weren’t keen on the ‘My’ at the start of the boat’s name, as it could be taken to indicate a ‘motor yacht’, rather than a fishing vessel, so she was renamed Spanish Eyes.

He went on to own two further vessels, also named Spanish Eyes – and in a quirk of fate, ended up owning the original Spanish Eyes for a second time.

Paul now owns and runs the Slippery Dick BM 20, an Island Plastics 27, working mainly on lobster in the summer, and adding netting to his portfolio in the autumn. He also worked prawn pots until recently but, with the Spanish markets being so volatile, has put that on hold for now. 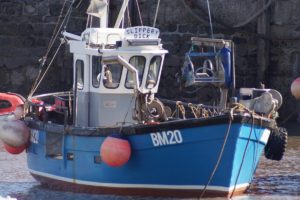 Luke values the importance of steering towards seasonal fisheries, so also has the boat set up for netting and whelking.

Paul’s brother Barry Wason had his turn with the Jellyfish next, but soon went on to larger boats, allowing him to fish on the Tennants – a patch of ground five miles south of the harbour. The 24ft Devon Crest was his first potting boat, followed by the 26ft potter Jowell, built at Greenslade’s in Poole.

Winters were fun, they told me – Barry and Paul used to pair up and go spratting. They never got rich out of it, but found working together really enjoyable.

In a change of heart, Barry moved over to scalloping, and had the 9.95m Provider E 87 built at the Steel Technique yard on the Isle of Sheppey. Constructed in the early 1990s, she was a sistership to the Kinsman PH 574, also built at the yard.

Barry had a good run on the scallops, but at the start of the whelk bonanza 20 years ago, he bought the 26ft Buccaneer Star of Hennock E 499 from Exmouth. Having an aft wheelhouse, she was set up for potting. She also carried weight well – which is what whelking is all about.

Barry then sold the Star of Hennock to Swanage fisherman Jeff Lander, and bought the under-10m Cornish-built Palatine FY 149, with which he carried on whelking and crabbing.

Eleven years ago, Barry bought the 8.5m Cyclone Grey Mist E 2 from Guernsey, and is very happy with her – she is, he says, a perfect boat both for getting to the ground quickly and for working out of a tidal harbour.

He told me: “After nearly 50 years of fishing, I’m definitely seeing changes – yes, in catch volumes, but they’re bound to fluctuate depending on fishing effort. It’s what’s out there that’s changing. Steaming back in, I see tuna jumping on the wrecks just six miles off. We’re getting crawfish up in the nets now – almost unheard of here. It’s a sure sign things are warming up.”

It was then Chris Wason’s turn to serve his ‘apprenticeship’ with the Jellyfish – almost a family tradition by then. Chris now owns and skippers the New Seeker E 12, the largest boat in the fleet working out of Lyme Regis.

The New Seeker is a Toms of Polruan-built 12m steel trawler/ scalloper powered by a Scania DI12 engine. Chris had her built, and took delivery in November 2012. The New Seeker replaced his previous vessel, Sunseeker, which is now working out of West Bay, 10 miles up the coast. 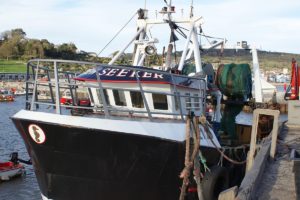 Chris Wason’s trawler/scalloper New Seeker E12 – at 12m, this is the largest vessel in the Lyme Regis fleet.

Chris and his two crew tend to work day trips trawling, landing back into Lyme at night, where the catch is consigned to Brixham for the following morning’s market.

In bad weather, the New Seeker is right on the limits alongside the quay in Lyme, so Chris steams her to Exmouth, where there’s far more shelter for larger boats.

Lyme Regis is definitely a port with a future. There is a very close bond amongst the fishermen there, along with a massive sense of enthusiasm. With new young blood joining the fleet, prospects for a thriving well-managed industry going into the next generation are looking good. 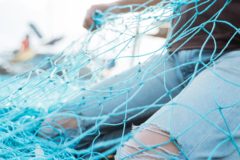 Fishing Within The Law: The next generation of fishers 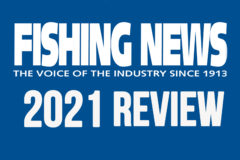 2021: Industry steps up as Brexit and pandemic challenges mount