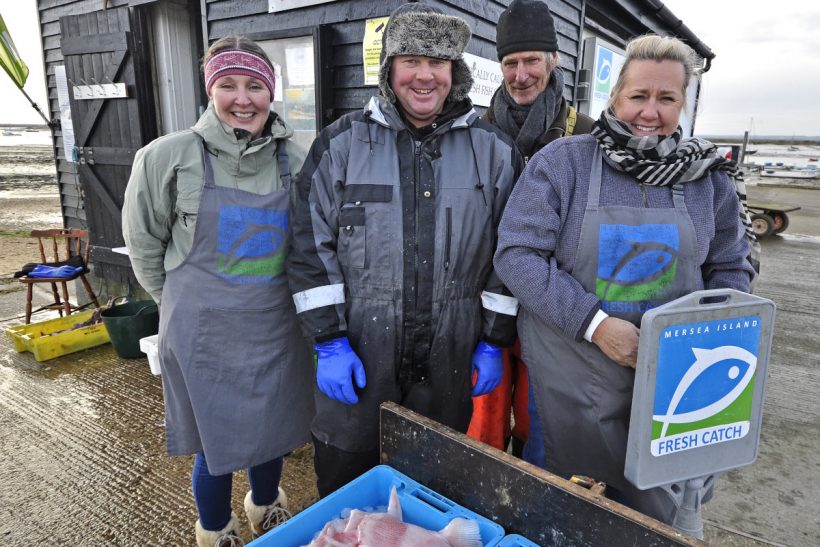 Inshore fishermen fishing from Mersea Island, located in the Blackwater and Colne estuaries southeast of Colchester, Essex, sell a lot of their small-scale catches to a loyal and growing number of local and not-so-local customers. John Worrall reports

Want to know how to Brexit-proof your fishing business?

Easy. Catch it local, and sell it local.

And back when Brexit was still a gleam in Nigel Farage’s eye, that’s pretty much what was already happening at West Mersea. For the past seven years, every Tuesday and Thursday afternoon, the four boats working from there, netting, trawling and potting, have been selling their catches direct to the public.

And such has been the word of mouth that these days, customers, alerted by email and social media, travel from near and far to buy fresh seafood. 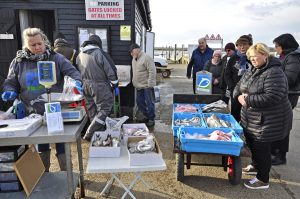 Calling itself Mersea Island Fresh Catch, the sales operation sets up its stall next to the West Mersea Fishermen’s Association’s icebox on the quay, on whichever side of the box is most sheltered from the wind.

But how did it come about? After all, fishermen don’t have a lot of time for much else except fishing, and when the idea of selling direct first arose, to cut a few people out of the chain and maximise returns, it was still a question of getting someone to organise it.

Previously, the most straightforward solution, as ever, had been to put catches to market and see what they fetched – and what they brought was down to supply and demand, and what the merchants would pay, and that wasn’t sustaining life as West Mersea had known it. Back at the turn of the century, it had nearly 20 boats, but by the end of the noughties, the fleet was down to half that. Something needed to be done.

Selling direct would mean fishermen developing relationships with actual consumers to persuade them to buy direct, rather than from fish shops or supermarkets, but it would have to be a co-operative effort if there wasn’t to be duplication and pointless competition. It would therefore need someone to take the lead and organise it, and also, fishermen being fishermen, someone to slap them about a bit and keep them in line. 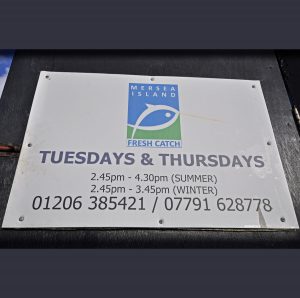 … opens on Tuesday and Thursday afternoon.

“I do the advertising, paperwork and publicity, and then help to sell the fish. I email 150 people on the list to say what fish we have available, and I post on Facebook, where I have nearly 2,300 followers. We also put notices around, and advertise locally.

“We have customers here on Mersea Island who come every week, but there are others who travel a long way every now and then, and buy for the freezer. Some simply phone up to see what’s available on the day, because we don’t know the full list ourselves until the boats are coming in. People love getting fish straight off the boats.”

Fran even designed the logo. “The land and the water – we wanted something simple.”

The unique selling point is fish as fresh as it can be. And in the relatively sheltered Blackwater estuary, there are rarely days when the weather stops them having any at all.

Fishing News went down to see Fresh Catch three years ago (Fishing News, 10 March, 2016), and was keen to see how things were going now. And the answer is that they are going better than ever.

On a late January day, the coldest of the year thus far – -5°C overnight, and not much above freezing all day – customers were forming an orderly queue to view the display trolley, as it was loaded with the day’s catch from the icebox and then pushed a few feet to sit beside the sales and weighing table. 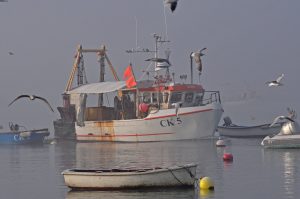 Fran and fellow sales operative Fiona Sparks were taking orders and cash – or cards for sales over £15 – and Johnny and Tim stood at the adjacent filleting table, ready to wield the knives as customers demanded, and filling in by skinning and cutting skate wings.

“Depending on the time of year, we do skate, soles, bass, slipper soles – the smaller grades are very popular – lobsters, plaice, brill and turbot, cod fillets, occasionally whelks, and a few sprats. We also dress lobsters in season, and they always sell out. Anything else that we don’t sell on the day goes straight to Lowestoft.”

The offers that day included cod fillets, sprats, skate, and Thames and Blackwater herring, a subspecies of the North Sea herring which is smaller, with one less vertebrae, and is spring- (rather than autumn-) spawning. Johnny had been out and had got some that morning.

It’s a small and very local fishery, but in March 2000, it became only the third fishery worldwide to get MSC certification, because it can be netted with minimal by-catch.

And as well as those fresh-caught herring, Fresh Catch was offering locally smoked kippers and also pots of pickled herring, which Fran herself has recently started doing. And – full disclosure – this Fishing News operative was given a pot, and can report that they were divine. 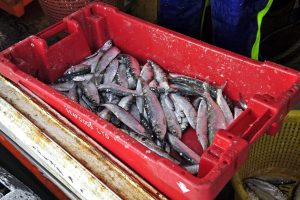 … having spent an hour getting a few Thames and Blackwater herring.

There were also a few bass fillets, although not as many as there would have been in the past, despite the estuary being full of them. Bass were big, in every sense, on this part of the coast, but effort restrictions have changed all that, and indeed changed the overall dynamic of the fishery.

One of the first customers in the queue that day was Andy, but he hadn’t come far.

“I live on the island. I get down here on average every two weeks, all through the year. The fish is always really fresh – you see the boats coming in – and good value as well. It’s always nice to get fresh lobster when they are in season. And squid – it changes through the season. I get whatever’s nice at the time.”

Then there was Julia, now from Coggeshall, 16 miles away, but until recently from Maldon, which is slightly closer. She began coming after the fish shop closed in Maldon.

“I come down here once a week, and today I’m also getting fish for two friends, sprats among other things – a special present for someone who loves sprats.”

But then there was Denise, who had driven an hour and a half from East London.

“I’ve been coming down for a couple of years now. I love fish, and this fish is fresh. I come down once a month or so to stock up the freezer. I was last here just before Christmas.” 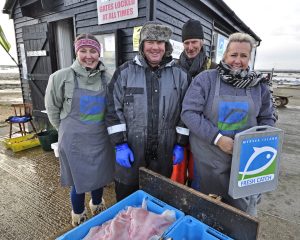 And then there was Jay, a session musician, who lives about 300 yards from the quay. He gets down most weeks, sometimes twice a week.

“We moved here nearly six years ago, and as soon as we realised it was going on, we came down. It’s the freshness of the fish and the idea of supporting local enterprise – that and a bit of banter with Fran. Getting slapped about with a skate wing puts a bit of colour in your cheeks.”

Three or four dozen customers came through during the hour the stall was open, but it can be two or three times that in the summer. One Chinese gentleman bought in bulk, walking off with carrier bags full. He does that every week – he and his family only eat Fresh Catch fish.

Quite a few customers had pre-ordered by email or Facebook message.

“If there is something that I know a particular customer likes,” said Fran, “I’ll put some to one side. That’s part of customer relations. One chap regularly says he’s got £25 and he doesn’t mind what he has. Sometimes I deliver. We have free delivery on Mersea Island, and for a nominal charge further afield, if it’s not too far. And customers keep coming back. We don’t need to do more days.”

They also supply restaurants. “I’ve got a buyer’s/seller’s licence, and I could do a lot more of that if catches were more consistent. But that’s how it is with local boats. You don’t know what you’ve got until they’ve caught it.”

And on a wider front, with all that bass in the estuary, Fresh Catch is now helping with the science, working closely with Essex University PhD students on studies of bass spawning and growth rates, and also of whelks. 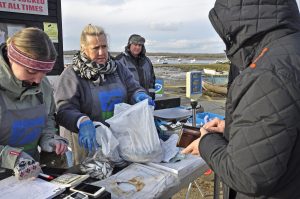 Some buyers come for a shipping order.

So, in times of uncertainty for small inshore fishing communities, more particularly for those with just a handful of boats, here could be a template – or part of a template – for the future.

This is definitely a candidate for Independent Fresh Fish Retailer of the Year in the Fishing News Awards 2019. Catching it local and selling it local is low-cost and low-impact, but equally importantly, it reconnects consumers with the product and its provenance.

‘Seeing the boats come in’ and ‘buying direct from the fishermen’ is what brought customers to the quay on a cold day.

It’s a world away from the supermarkets’ polystyrene, clingfilm, and bits of fish a day or two, and a few hundred miles, out of the sea. And, of course, profits recirculate locally, rather than being sucked away into distant shareholders’ pockets in a further contribution to coastal impoverishment. 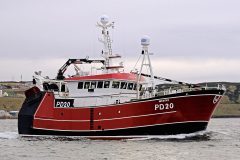 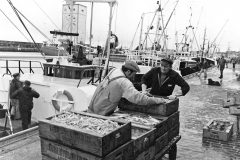 Ports in the past.