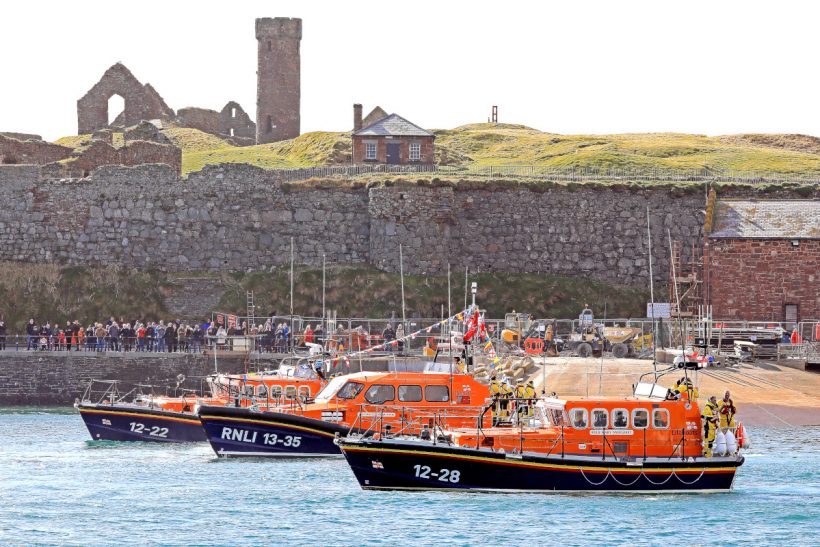 The coronavirus crisis has had a major impact on lifeboat stations in terms of publicity visits, exercise launches and events – but the commitment of the RNLI to saving lives at sea remains as strong as ever, and lifeboats have continued to be on call throughout the lockdown, reports Nicholas Leach.

The last major operational event, a week before the lockdown was introduced, took place at Peel on the Isle of Man. The new 13m Shannon lifeboat Frank and Brenda Winter made her debut on 15 March and enjoyed an impressive welcome, escorted by a small flotilla of Manx lifeboats and watched by hundreds of people lining the breakwater of Peel harbour.

The new lifeboat left the RNLI College at Poole on 11 March and called at Brixham, Newlyn and Arklow on her way to her new station. The passage to Arklow involved a nine-hour crossing of the Irish Sea, and the final leg of the journey was also a long one, to ensure she reached her new station at 1.35pm, in recognition of her operational number, 13-35. 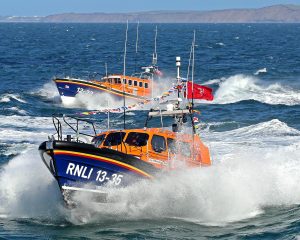 Escorted into Peel by other lifeboats from around the Isle of Man, Frank and Brenda Winter rendezvoused at 12.30pm off Fenella Beach, with the arrival seaward of the castle and breakwater just over an hour later. On hand were Port St Mary’s 14m Trent Gough-Ritchie II, Port Erin’s Atlantic 85 Muriel and Leslie, and Peel’s temporary lifeboat, the 12m Mersey Mary Margaret.

The station’s former lifeboat, the 12m Mersey Ruby Clery, which is now serving at Ramsey, also launched for the occasion and came down to take part in the Peel parade.

Jon Corlett, coxswain for the passage from Poole, said: “I was a little emotional to see so many people along the shore and breakwater waiting for us after what had been an especially challenging journey. Clearly, the Isle of Man has a great affection for the RNLI.” With him on the passage were station mechanic Ciaran Cain and volunteer crew members Juan Owens, Jason Spooner and Matt Corlett.

Peel RNLI lifeboat operations manager Allen Corlett added: “It was a moving and unforgettable spectacle. Our new lifeboat is the first Shannon to be stationed in the Isle of Man by the RNLI. With waterjets, the lifeboat can turn in its own length, navigate around hazards and stop almost instantly. The crew was able to demonstrate these remarkable capabilities to an appreciative audience during displays by the breakwater and in Peel Bay.”

After the demonstration and sailpast, the new lifeboat went into Peel Marina to berth alongside the relief 13m Shannon Ruth and David Arthur, which has been at Peel to help with crew training. 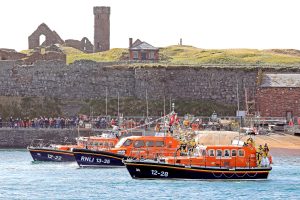 However, coronavirus restrictions meant that training on the new lifeboat was suspended, so she was not placed on service, leaving the relief Mary Margaret as the operational lifeboat. When training will resume, and at what point the new lifeboat can take up her duties, remain to be seen, as the rebuild of the station’s lifeboat house needs to be completed and training on the SLRS launch and recovery rig needs to take place.

The decision to close all RNLI shops and visitor centres in response to the Covid-19 pandemic was taken on 17 March. The RNLI’s statement read: “The welfare of our volunteers, supporters and staff, along with our ability to maintain our world-class lifesaving service, is our priority. We have taken the decision to close all RNLI shops, museums and visitor centres, including the college in Poole, with immediate effect. Our lifeboat stations remain operational, and we will continue to respond to those in need, but will not be open to visitors.”

In April, the economic impact of the lockdown led the RNLI to furlough a third of its staff, suspend the building of boats at the All-Weather Lifeboat Centre in Poole, and halt construction work which was ongoing at a couple of lifeboat stations. This will have a knock-on effect, as yet unknown, on how the charity will continue the modernisation of its fleet and deliver its high-quality training programme around the coast.

Chief executive Mark Dowie, who is taking a 50% pay cut, said: “We have paused our ongoing planned replacement of equipment and buildings, such as lifeboat station rebuilds and building new lifeboats. We’re also looking at new ways to fundraise.” 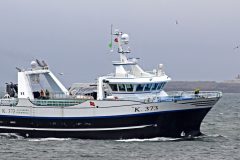 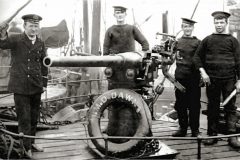