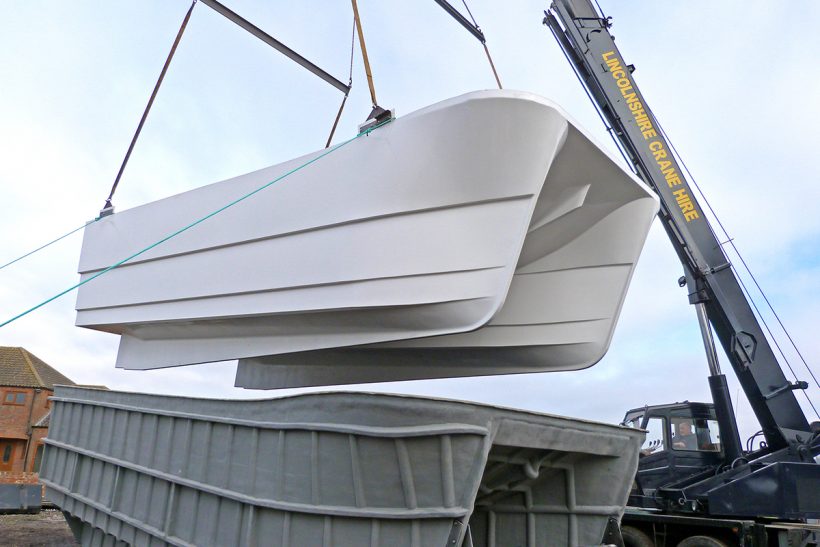 One of a kind – so far. John Worrall reports.

You need a new boat, a catamaran, as big as possible under 10 metres. It needs to able to work from a heavily-tidal creek, to haul 700-800 pots a day, up to 30 miles away, and bring back up to two tonnes of crabs and lobsters. You’ve seen good boats on the market, but no real all-rounders, not in your terms, anyway.

Above: Lifting the hull out of the mould…

So what do you do? Well, you build your own – the plug, mould, boat and all, in a purpose-built, temperature-controlled shed. And then you source some engines and propulsion gear, make the hydraulics and most other stuff yourself, bolt it all together, and you go potting.

Ok, this isn’t quite as speculative as it might sound, in that Lincolnshire fishermen Jim and Paul Walker do have a bit of previous in boat building, if only at a modest level. They build a few Norwegian dinghies for Scottish salmon anglers, which once upon a time were in wood, but these days are fibreglass, which means that the mechanics of the plug-mould-boat process are at least familiar, if on a smaller scale.

But they also have previous in commercial fishing, in fact, 35 years working out of Saltfleet, the only ones to do so these days, because that long and heavily tidal creek is not for the feint hearted, and not at all for those unfamiliar with its constantly changing profile. But then Jim and Paul grew up in the coastguard house on the creek, and it’s their backyard.

“There are some very nice boats about, but none suited our situation exactly. So we thought it best to just crack on and put everyone on making this. We had the shed built, and then we made the plug and mould ourselves, which took six months. The actual boat we started at Christmas.”

And in mid-February, it’s shaping up quickly.

The boat is 9.9m x 4.2m, and fully-laden will draw about 1.4m. It will be powered by inboard Yamaha diesels generating 149kW.

“Basically, the idea was to design something that would do a reasonable turn of speed and cover up to 100 miles a day to get around the gear, because we’re being pushed further, by windfarms among other things. But it also needed that carrying capacity. Everyone seems to sacrifice everything for speed – big engines – but with hulls so narrow that they can’t carry any weight.”

These hulls are the real trick.

“The biggest thing about the plug was getting the bows right. With the weather and seas here, you need bows with a nice fine entry, but as much buoyancy as possible. So the bows are flared, which also narrows the underside of the bridge deck and gives less area for waves to slam into. And with the buoyancy, the boat rides higher, which further reduces slamming because waves tend to travel through, more than hit.”

The wheelhouse is right forward and takes 2.5m of the length, leaving just under 7.5m of open deck, under which there are three compartments, with fuel tanks and steering gear right aft, engines amidships and the fish holds forward of them. The shooting door is off-centre to port in the stern.

“But the buoyancy gives a high deck and high freeboard, and there will also be high gunwales to make it safer for the lads working. On the other hand, that all means that in the Saltfleet estuary we’ll need the Hiab for landing because the boat is so high, although even at a landing stage, you wouldn’t physically lift the catch over those gunwales by hand. But then after 12 hours hauling pots, you don’t want to have to heave a tonne or more of crab up over the side anyway.

“The frames are 100x100mm foam, with the top 250mm of oak encased in foam so that the timber gunwales attach to oak rather than foam. That makes the sides of the boat very strong, but the oak doesn’t need to go down further because below that, the frames are below the whaleback into which the wheelhouse sits.”

But the boat’s size does mean the river at Saltfleet has other limitations.

“Tide is a bit of an issue – there are very strong tides here, and with this boat, we won’t get into the river on the neaps. So we’ll just go to Grimsby for those three or four days.”

But that won’t be much of a change, because the Walkers have always found themselves landing at Grimsby from time to time, particularly in a stiff north-easterly when it’s not worth trying to get across the wind into that narrow Saltfleet channel, which hooks south-east at the seaward end.

But how do you go about knocking up a boat of this size which, after all, is on a slightly different level to a Norwegian dinghy?

“We’ve had a lot of help, particularly from Seafish at Grimsby, where Richard Blackhurst and Dave Dewick, the surveyors, were unbelievably helpful. We wouldn’t have been able to do this without them,” says Jim.

“The plans worried me because the Seafish requirements are daunting when you read them – things like cross-deck structural analyses. I’m not a naval architect, and they can be expensive. But Richard and Dave told us to come up with the best we could, and they’d help all they could.

“So I came up with rough plans, and then we spoke to Gillian Gray at Gray Naval Architecture in Bideford, and she was also unbelievably helpful. I sent my drawings to her – and she spoke to Richard and Dave, and within 10 days the plans were done and passed.”

But that then was probably the easy bit. Actually building it was indeed on another level.

“First of all, we built the plug, basically an upside-down boat, in wood, there in the shed, and then we built the mould on it. Then we had to bring the whole combination outside to turn it upright. We got a 30t crane – mould and boat were about 9t – and tipped it end-over-end. I think everybody in the village thought we were building a cathedral when we were doing that. Then the crane took the plug out, and we got on with putting fibreglass into the mould to make the hull. It’s all been a bit tingly, because if one of those small Norwegian jobs goes wrong, it’s a couple of thousand quid, but if this one goes wrong, it’s a bit more serious.”

A lot of time has gone into designing a hull that will perform without having huge engines.

“The architect’s plans are passed up to 26 knots, but for that, you are talking substantially more power. It’s all compromise, but if we can cruise around 12 knots, we’ll be happy.

“There’s nothing to say that somewhere down the line, we wouldn’t put bigger engines in and increase the licence. But over 150kW, it’s got to be a single licence and getting hold of them can be difficult and expensive.”

Once everything is put together, it will then need transporting three or four miles from the shed to the river.

“We have a trailer that was for the old boat, but we’ll put a different axle on it just to go to Saltfleet, or we’ll get a low-loader if we have to, although the Highways Agency seems to think we can manage.”

They probably can, because they’ve managed quite a lot so far.

Fishing News will return when the catamaran is settled in and fishing to see how she performs. 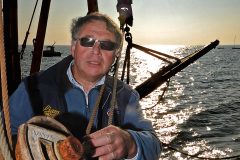 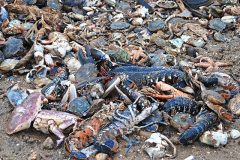