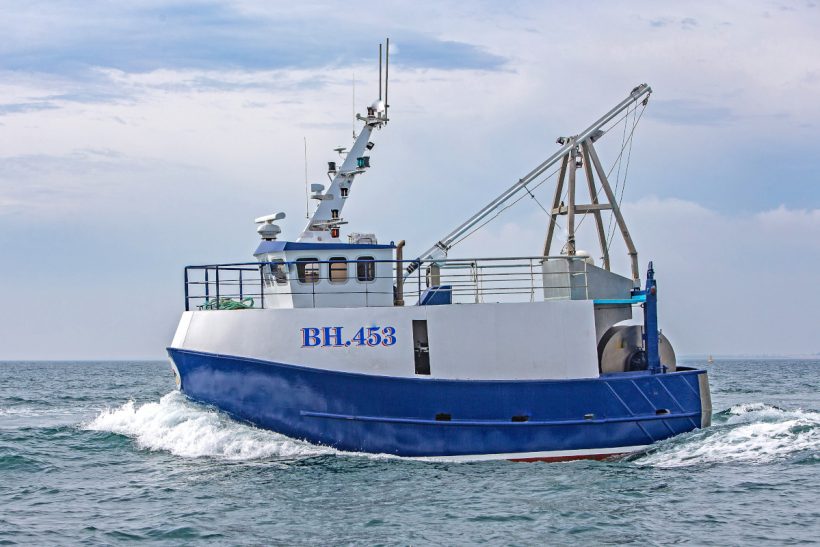 Blueye skipper/owner Colin Graham is delighted with the quality of workmanship and the level of co-operation that went into the extensive refit of the 20-year-old vessel. 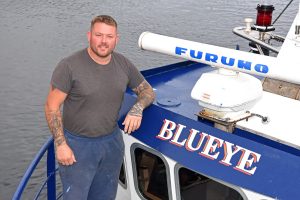 On returning to North Shields from Bridlington, skipper Colin Graham and Blueye’s two crewmen rigged out the vessel before fishing the local prawn grounds for a few nights. Fully satisfied that the new machinery and systems were performing as expected, they then steamed 70 miles north to join a number of other Shields boats, following their customary seasonal summer practice of fishing the Firth of Forth prawn grounds overnight from Eyemouth.

While preparing for another nightshift, skipper Colin Graham said: “Having been impressed with the standard of work that Steve Ellis and Jimmy Dean previously completed on the under-10m trawler Incentive BH 243, the decision was taken for the work to be undertaken by these companies working together at Bridlington. 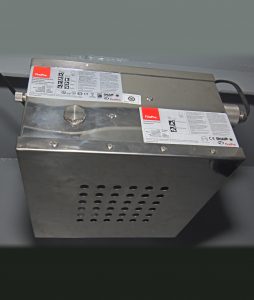 “The end result fully justifies this decision. Jimmy and Steve did everything asked of them, and more. Blueye is a fine boat, and fully justifies the work done, which will stand us in good stead for years to come. The remote safety features implemented by Steve Ellis are particularly impressive and reassuring.”

Blueye was built in North Wales as Bonaventure for Blyth skipper Wayne Smales in 1999, since which time the vessel has fished both prawns and scallops off the Northumbrian coast.

Bonaventure was bought by Colin Graham and renamed Blueye in 2015. Since then, the vessel is reported to have become one of the highest-grossing prawn trawlers on the Tyne. 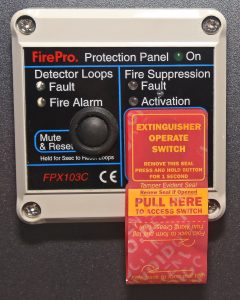 … is activated from a control panel in the wheelhouse.

Although he only started trawling five years ago, Blueye is one of four prawn trawlers that Colin Graham now owns, the others being Blueye D SN 94, Incentive BH 243 and Diamond D SN 100.

When the vessel arrived at Bridlington as the early-year prawn fishery from North Shields tailed off, work began to strip Blueye back in preparation for commencement of the renewal work.

The previous steel section of shelterdeck abaft the wheelhouse was cut off, together with the deck plates amidships. The original Cummins engine and self-change MRF 7000 gearbox were lifted ashore, at the same time as all hydraulic piping and electrical wiring were stripped out. The wheelhouse received similar treatment, being stripped back to the bare framework for total renewal.

JD Marine supplied and fitted a new Doosan L126 TIH main engine and a Dong-i D-I 180 gearbox with a reduction ratio of 6:1. A new shaft and five-bladed propeller (49in diameter and 60in pitch) were fitted when Blueye was lifted out of the water, using Bridlington Harbour Commissioners’ boat hoist. 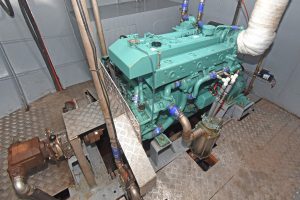 All pipework in the engineroom was replaced with 316 stainless steel. The hydraulics are driven off the fore end of the engine through a Fenner coupling.

A compact FirePro fire suppression system installed in the engineroom, and operated from a small control panel in the wheelhouse, is a key feature of the vessel’s new safety arrangements, together with a Swann CCTV system, in which four cameras provide continual coverage of the engineroom and working deck.

With the majority of onboard fires at sea originating in enginerooms, the need for anyone to try to enter the engineroom, which inevitably would fuel the fire further by adding oxygen, has been eliminated by positioning the requisite controls in the wheelhouse, thereby enabling remote operation. 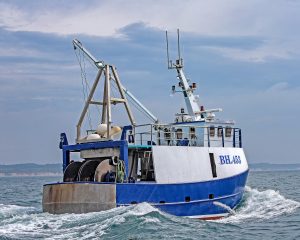 Steve Ellis said: “Avoiding fire on any vessel is a three-pronged attack, involving detecting, arresting and extinguishing it. The CCTV system provides detection, while remotely operated isolators are of crucial importance in arresting it.

“In the event of a fire, all the skipper needs to do is activate a quick-release tab on the FirePro control panel installed in the wheelhouse, to release the extinguishing aerosol-based compounds from the master unit in the engineroom.”

FirePro automatic fire suppression systems incorporate the latest generation of FirePro Compound (FPC) technology which is the result of intensive and extensive research and development, consisting mainly of potassium salts with non-pyrotechnic materials. On activation, the FPC transforms into a rapidly expanding, highly efficient and effective fire-suppression condensed aerosol that is distributed evenly in the protected enclosure using the momentum developed in the transformation process. In contrast to traditional fire-extinguishing methods (gaseous or fire sprinkler systems), the fire is extinguished predominately by interrupting the chemical chain reactions in the flame, as per the tetrahedron of fire, without depleting oxygen.

The extent to which Colin Graham is impressed by the FirePro fire suppression system installed on Blueye is shown by the fact that SE Marine is now fitting a similar system on the biggest of his four trawlers, the 16.7m Diamond D SN 100. Other work currently being undertaken on Diamond D includes the installation of new LED deck and navigation lights, and of Murphy control sirens on deck, for main engine high temperature and low oil pressure readings.

When the new steel deck plating was in position, a new set of aluminium split net drums (2 x 2t), supplied by S&P Blair & Son: Engineering Services of Dunbar, was mounted on the main deck towards the transom.

The aft side of a new central aluminium reception hopper was then fabricated to match the radius of the net drum. The contents from the hopper are released onto a sorting table fitted across the fore end of the hopper, from which the crewmen make their selections into baskets held in a secure deck rack at their feet. 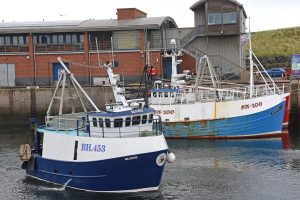 Diamond D is now being fitted with a FirePro system by SE Marine.

The reception hopper is served by a new square-framed lifting gantry and a Gilson winch mounted near the heel of the landing derrick. This arrangement enables the codend to be taken aboard in a continual hauling process. The transom stern was sheathed with stainless steel to minimise wear and tear and discoloration.

In addition to the new section of shelterdeck abaft the wheelhouse, a new raked fibreglass foremast was moulded and fitted with new LED navigation lights.

Blueye was fully repainted at Bridlington before returning to North Shields in pristine  condition.

23 October is a date that should be burnt into the awareness of all skippers and owners of boats under 12m, reports John Worrall.

It’s obviously not Brexit day, and probably not an election day, although on that front, anything could happen in the next half hour. 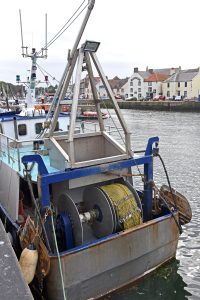 It’s the date on which a number of safety measures will become mandatory for any commercial fishing boat, bringing U12s more into line with bigger vessels. The relevant regulation is the MCA’s Merchant Shipping Notice 1871, Amendment 1(F): Code of Practice for the Safety of Small Fishing Vessels of Less than 15m Length Overall.

Andrew Wheeler is the fisheries business advisor at East Riding of Yorkshire Council – the council is one of the few, so far, to have such a role – and has been working with skippers on the Holderness coast, looking at EMFF funding that can be available under certain circumstances.

He says that once something becomes mandatory, it does not qualify for EMFF funding, but not all measures will become mandatory immediately.

“23 October is when your regular safety equipment – life raft, EPIRB, things like that – become mandatory, but fire suppression systems will do so only at the next five-yearly MCA audit. If a boat had an audit tomorrow and a system wasn’t already fitted, it would have to be, but wouldn’t qualify for funding. But for a boat that has an audit in, say, four years’ time, a system would still qualify for funding.” 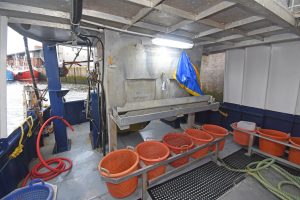 The fire suppression requirements apply to boats with inboard engines and thus enclosed spaces such as enginerooms, or others deemed high-risk, such as separate fuel stores. And until the next audit – either at the five-yearly interval or when the vessel changes hands – there is a window of funding opportunity.

“I’ve been proactive in contacting people in the under-12m fleet in particular and getting them to check when their MCA audit is due, and to get their applications in sooner rather than later,” says Andrew Wheeler. “U12s qualify for up to 80% funding under EMFF. Boats bigger than that should have fire suppression systems installed already.

“We’re having a push to get funding for as many people as we can while they’re eligible. We’ve done projects worth about £1.75m on this coast and attracted over £1m of funding.”

He’s been working in particular with Bridlington electrical engineer Steve Ellis of SE Marine. The company supplies, installs and services marine equipment, and in a fire suppression context is an approved supplier and installer of FirePro systems similar to the one fitted on Blueye.

FirePro (fireprouk.com) uses condensed aerosol technology, which has been around for a while but has now become mainstream, according to Peter Bradon of FirePro UK, based in Chertsey, Surrey.

“For the past 80 to 90 years, the fire suppression market has been dominated by high-pressure gas systems and they need cylinders, which are heavy and take up valuable space. FirePro is modular in construction and needs much less agent to extinguish a fire than gas systems do.

“It’s only in the past 10 to 15 years that condensed aerosol technology has been developed into a viable product, and it has better firefighting properties than other agents.

“FirePro is made out of potassium nitrate, which extinguishes a fire at a molecular level, by changing the chemical make-up of a fire, acting on the flame free radicals and interrupting the chemical reaction of the flame.

“A unit is fixed inside a protected space, and the size of the space governs the size of the unit. It is connected electrically, which makes for ease of installation, and it can be tucked out of the way. And our units have a 15-year working life and are easy to maintain.

“There is an option where it can only be manually operated by pressing a button. Or you can have smoke or heat detectors installed in the protected area that will automatically release the FirePro.” 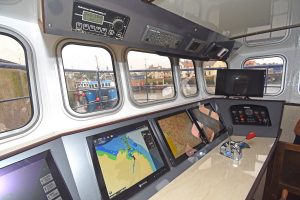 The system depends on the protected area being gas-tight, but the installation process does ensure that all hatches are sealable.

Other systems and installers are obviously available, but SE Marine is ready to travel anywhere in the country, more particularly while the funding window is open.

Andrew Wheeler says, “What boat owners need to do is get their EMFF application in with a stated end-date for the installation – which would obviously need to be before the date of the next MCA audit – and then once acknowledgement has been received from the MMO, anything that is spent on the project is eligible.”

And will Brexit affect this at all?

“There is a Treasury guarantee in place for anything for which money is approved, if EU money should happen to be not forthcoming.” 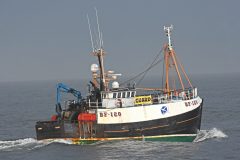 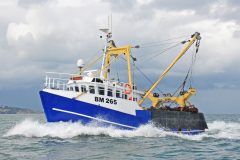