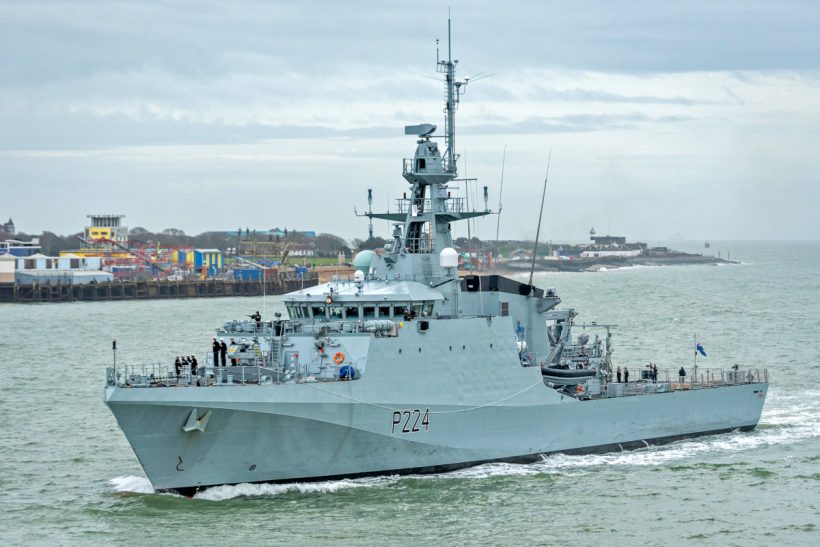 HMS Clyde, one of the great workhorses of the Royal Navy’s Fishery Protection Squadron (FPS), returned to HMS Naval Base Portsmouth on 20 December after 12 years on patrol around the Falkland Islands, bringing her final voyage as a member of the fleet to a close, reports John Periam.

The latest addition to the fleet, HMS Trent, one of the new Batch 2 River-class patrol vessels, was there to greet her.

HMS Clyde’s last captain, Lieutenant Commander Richard Skelton – serving his second spell on the ship, five years after being her executive officer – said: “HMS Clyde has been a very good ship, so reliable, and she’s had to be – the South Atlantic’s not a forgiving place. She was designed for a particular task, to be the Falkland Islands patrol vessel, something which she has done without return to the UK, and without major docking, for 12 years. The ability to demonstrate Britain’s global reach, and to provide support to the islanders, along with their fishing heritage, is what we do, and is precisely what defence is all about.” 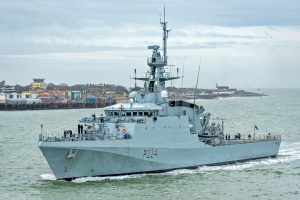 HMS Clyde was decommissioned on the same day she arrived back at Portsmouth. The commanding officer of the Fishery Protection Squadron, Commander Simon Pressdee, said: “It has been a real privilege to welcome HMS Clyde home today, after what has been the longest Royal Naval deployment in modern times, achieving over 12 years forward-deployed to the South Atlantic.

“She is steeped in Navy history, and over 800 members of the FPS have served on HMS Clyde, experiencing life in the southern oceans for over six months at a time, providing many of them with unique and special memories from an outstanding part of the planet.

“Her decommissioning this afternoon will remember all those who have served in her, before we hand this outstanding workhorse of the fleet back to BAE Systems – who have carefully supported her throughout her deployment – for the next phase of her life.”

It has been a busy month for the Portsmouth dockyard, when the FPS welcomed HMS Trent for the first time, after construction in Scotland and her initial sea trials.

The new Batch 2 vessels will commence service within the FPS in 2020. Three of the Batch 1 vessels are also being retained for FPS use.

The first Batch 2 deployment has been undertaken by HMS Forth under the command of Commander Robert (Bob) Laverty. HMS Forth is currently on the way to the South Atlantic where she will begin her patrol of the Falkland Islands, offering assistance and reassurance to inhabitants, exploring the outer reaches of the archipelago, and maintaining a presence in South Georgia, as HMS Clyde has done with distinction since 2007.

HMS Trent, the newest warship in the Royal Navy, is the third of five Batch 2 River-class vessels that will join the FPS to carry out roles in maritime security in home waters or globally, including fishery protection, border patrols, counter-terrorism, and piracy and smuggling prevention.

Construction of HMS Trent began in October 2014 when the first steel was cut in Glasgow. With a length of 90.5m and a flight deck that can accommodate the Merlin helicopter, Trent is capable of a speed of 24 knots and is crewed by around 40 personnel, with facilities to accommodate more depending on operational roles.

HMS Clyde returns to Portsmouth Naval Base after 12 years in the South Atlantic.

“There will fresh challenges for the FPS, with both types of vessel working alongside each other. The Batch 1 vessels will be deployed more in UK waters. We are the eyes and ears of the UK fishing industry, and our role is to protect our fishermen. We might not be seen at all times – however, rest assured that with the latest onboard communication systems, we are able to monitor and track any vessels within our territorial waters,” said Commander Simon Pressdee.

Crew member AB Reece Backshall, who returned on HMS Clyde having been onboard for the past seven months, said: “It’s hugely bittersweet for us today. Homecoming is always emotive, and the separation from families is possibly the hardest part of the job. We are a small team, and that is what is so nice when it comes to working within the FPS – we are so close, and everyone gets on with everyone else. Of course it is great to be back for Christmas – we were worried that we were not going to make it, but luckily we are back today as scheduled.”

Navy personnel often speak of their abiding loyalty to the FPS, with many choosing to return to the squadron after their initial deployment. They include some of the best RIB crews in the Royal Navy, as many fishermen know first-hand.

The squadron’s working role will be extended with the addition of the Batch 2 vessels. HMS Clyde may have gone, but her sister vessels, including HMS Mersey, will now be retained in their roles in order to address challenges related to leaving the EU and support and protect fishermen around the UK. 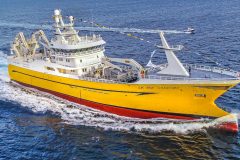 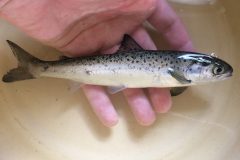