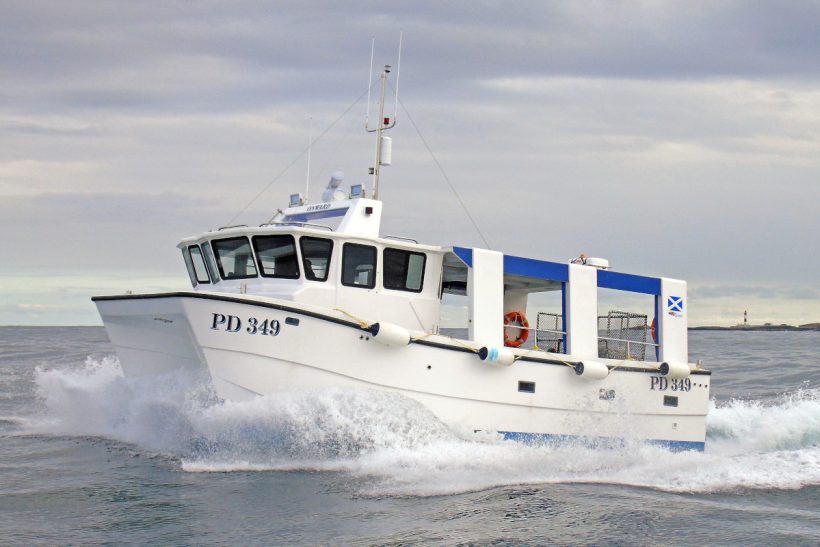 The new Onward replaces his previous boat of the same name, a Cygnus Cyclone 30 that he fitted out himself in 2013, five years after he completed the B26 Buccaneer PD 349. 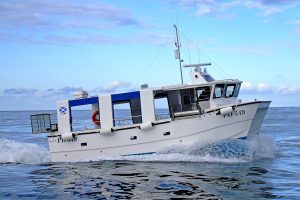 A strong easterly wind set in the North Sea led to Onward heading in to Newlyn to refuel, before rounding Land’s End and heading up the Irish Sea non-stop in ideal conditions, apart from refuelling at Holyhead and Oban, before entering the Caledonian canal at Corpach. Immediately transiting the eight locks that comprise Neptune’s Staircase, built by Thomas Telford between 1803 and 1822, Onward was lifted 64ft in less than a quarter of a mile, before entering Loch Lochy, en route to Loch Ness and the Moray Firth. 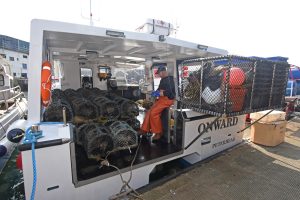 Stern view of Onward on her pontoon berth in Peterhead’s Port Henry basin, with skipper John Kensett making up a leader of gear.

Cruising at her design speed of 10 knots, Onward is reported to have performed exceptionally well during the long delivery passage and since starting to fish from Peterhead, when a further run of fresh southeasterly winds gave an early opportunity for the catamaran to prove her seakeeping capabilities, which were succinctly described as ‘highly impressive’.

Skipper John Kensett said: “While tougher tests inevitably lie ahead, Onward has met every one to date comfortably. The Catapult team at Southampton were very easy, and very good, to work with. As far as I’m concerned, the end result speaks for itself, and more than meets any expectations.” 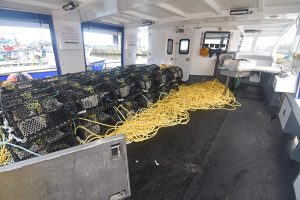 The location of the crabbing grounds off Peterhead, which are totally exposed to sea winds through an arc of over 220º from the northwest round to the south, and have only marginal shelter from the land, was one of the reasons that John Kensett opted for a catamaran hull when he took the decision to go for a third new boat in just over 10 years. 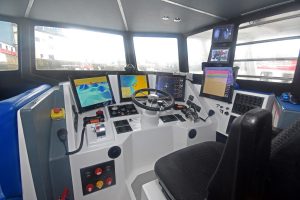 Having been impressed by the 12m Alert III LK 241, which Catapult Catamarans Marine Projects delivered to Shetland skipper Richard Scott in 2015, John Kensett initially contacted the Southampton company two years ago, before visiting the factory to view the build quality at first hand. Fully satisfied with what he saw, discussions started on the design of an under-10m catamaran, which eventually included a full deck canopy to enhance working conditions on a sheltered main deck.

Onward has the distinction of being the last of a long line of Catapult catamarans to be overseen by MD Steve Guyan, who moved into retirement when skipper John Kensett left Southampton for Peterhead. 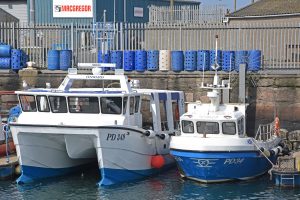 Onward and her predecessor Onward S berthed alongside each other, on the inshore pontoon in Port Henry basin.

The Southampton company was founded as Catapult Catamarans Ltd by Steve Guyan in 2006, as a family-run business focused around the concept of producing a large, fast, highly efficient hull with excellent load-carrying capabilities and power-to-weight ratio, delivered by a high-performance fine-entry power catamaran featuring fast cruising speed with good seakeeping and fuel economy characteristics. Due to continual expansion and diversification into other services, the company was subsequently rebranded as Catapult Catamarans Marine Projects Ltd.

“In addition to fishing vessels, the company builds a wide range of charter boats”

In addition to fishing vessels, the company builds a wide range of charter boats for use in the renewable energy, dive and survey sectors. 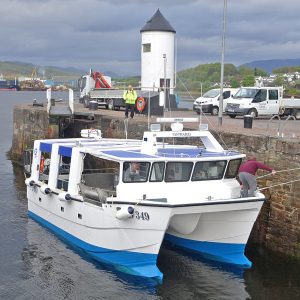 The rights to use the moulds from which Catapult catamarans are produced have been acquired by Steve Guyan’s sons Mike and Ash, who have run the marine engineering company Aqua Marine Services Ltd, since 2017.

A 12m potting catamaran is currently under construction for Ireland, with moulding of a similar hull scheduled to begin towards the end of the year.

Mike Guyan said: “John Kensett put his trust in us to build him a Catapult that will hopefully bring him a prosperous future within the fishing industry. We put our all into every Catapult and Onward was no exception. We wish John all the best for the future with his new vessel and it has been an absolute pleasure working alongside him.” 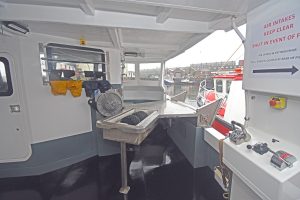 The gunwale rail roller is positioned well forward, ahead of duplicate engine and steering controls.

Keeping the LOA of Onward under 10m was a given, in order to comply with the requirements for inshore boats taking part in the summer hand-line mackerel fishery.

Enclosing the extensive working deck was achieved by extending the wheelhouse roof to the transom, supported by three integral box-section pillar sections incorporated into the bulwark construction. Two heavy-duty drop-down screens, on both the port and starboard sides, can be easily and quickly lowered into position, to effectively seal the working deck. John Kensett and Peter Buchan speak highly of the benefits this arrangement is delivering, including eliminating spray blowing across the deck in fresh weather, and keeping dry on the all too frequent days of continual rain, as well as keeping shellfish out of sunlight. 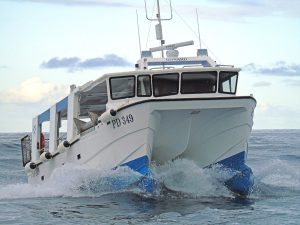 Insured by Sunderland Marine, Onward is, on occasions, expected to work up to six miles offshore and 10-15 miles southeast of Peterhead, as well as closer to harbour.

The strong tide runs that are a constant factor off Peterhead dictate that potting is closely dovetailed to slack water, particularly during spring tides, when skippers regularly work double tides in the same day, returning to harbour for a few hours before going away again.

Onward is the latest addition to the growing fleet of full- and part-time creel boats that work from the small-boat pontoons in Port Henry basin in Peterhead harbour.

Skipper John Kensett and Peter Buchan work D-section creels, ranging in size from 24in to 46in, supplied by Caithness Creels and Gael Force. The smaller creels are worked in leaders of 50, and the larger parlours in 40s. Backing ropes are 14mm diameter, either Euro-steel or SeaGold, with the latter being sourced from Gael Force.

Onward’s catches of brown crab, together with smaller by-catches of lobsters, go to a variety of processors, including The Crab Company Scotland, East Neuk Shellfish Ltd of St Monans, and AM Shellfish of Inverurie. 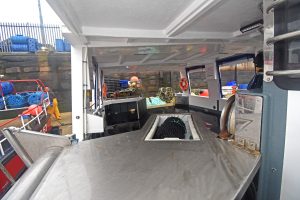 Onward’s hull features ultra-fine deep ‘V’ forward sections that help to reduce any slamming to a minimum. This characteristic also keeps the vessel on a more level altitude while running through all the speed range, allowing power to be transferred more efficiently to propellers by keeping the propeller shafts at a constant angle, enabling more forward thrust. Deep forefoots counteract the windage that a vessel of this size is subject to at slow speed manoeuvrability. 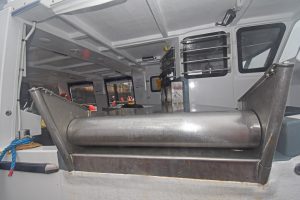 … and the gunwale rail roller and rope guides.

A full wave breaker is also incorporated in the hull design, with built-in flare and progressive reserve buoyancy to give an immensely strong central spine to the boat. Two full-length keels give the vessel increased grip in the water, to aid good course-keeping and static stability in wind situations. The keels have been cut back and profiled to deliver a clean flow of water to the propellers. ‘P’ brackets and hung rudders are also fitted to give enhanced hydrodynamics and performance. 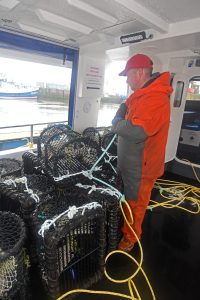 Three flush deck hatches are fitted on either side of the main deck. The hatches closest to the stern lead to the steering gear and fuel tanks, while the larger middle one gives easy access to the engine compartments. Forward hatches give access to dry storage holds for spare ropes.

A stainless steel cradle fitted on the starboard side of the transom provides additional storage facilities for empty boxes, etc.

Potting activities onboard Onward are centred on self-hauling and shooting systems.

A 1.5t Spencer 17in-diameter hauler is vertically mounted centrally on the starboard rear bulkhead of the wheelhouse, which is angled forward to ensure that the backrope leads as far forward as possible. 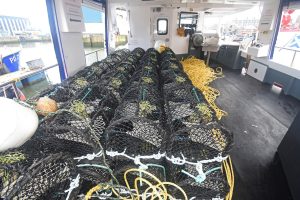 … a leader of new creels on Onward.

Integral stainless steel flanges and rollers are fitted at each end of the large-diameter gunwale-mounted roller to retain the backrope, and guide the creels aboard.

Duplicate engine and Simrad remote steering controls are mounted aft of the hauling position on the gunwale rail, on the inside of the first vertical support pillar for the roof canopy.

Creels are usually stacked in rows two high and four wide along the port side, before being self-shot through a transom door.

When a leader is ready to shoot back, the end weight is freed to run by crewman Peter Buchan pulling a quick-release line, while safely standing inside the wheelhouse, completely clear of all tailings, backropes and pots.

After hauling a leader, the end weight is lifted aft and positioned on the main deck forward of the self-shooting opening. A short strop attached to the tailing, eight fathoms from the end weight, is then placed into the quick-release hook. 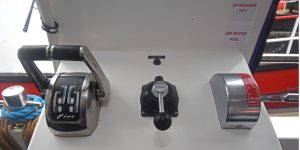 Duplicate engine and steering controls are positioned aft of the hauling position, protected by the first box-section canopy support.

Activated in this way, the quick-release clip secured to the centre stanchion of the transom cradle allows the end weight to be pulled through the shooting gate by the weight of the trailing buoy in all conditions, without the need for anyone to be on deck.

This feature is one of several that skipper John Kensett has incorporated into Onward in order to maximise crew and vessel safety at all times.

In the coming weeks, Onward is expected to engage in the short seasonal summer inshore mackerel fishery off the Buchan coast. Five DNG computerised jigging machines will be mounted on the underside of the deck canopy – three across the stern and two forward, port and starboard. Dyneema backing lines and hook traces will be retrieved through mackerel strippers mounted on the end of hinged fish chutes, that extend beyond the vessel’s beam by 1m during fishing.

Hydraulic pumps, supplied by Spencer Carter, are mounted on both gearboxes. This arrangement ensures that maximum hydraulic power can be delivered to the pot hauler when conditions require this, as well as being able to operate at half speed from one engine only.

Two 700-litre-capacity GRP fuel tanks are arranged in the aft sponson compartments, together with the Vetus steering gear.

Onward’s well-proportioned island-style wheelhouse provides further evidence of the high level of specification delivered by Catapult Catamarans Marine Projects. Demister air vents, incorporated into the main forward console at the bottom of the windows, provide a flow of warm air from the engines to ensure that any condensation is quickly eradicated on the inside of the windows.

Cooking facilities, together with a mess table and bench seating, are arranged to port of the central steering console.

Echomaster Marine supplied a comprehensive package of wheelhouse electronic equipment, which was installed by Fortitude Marine.

A four-camera TV system is also fitted, with two cameras focused on the working deck, allowing skipper John Kensett to observe the potting gear being shot while focusing on the Olex displays, and single cameras monitoring the enginerooms at all times.

A walk-in heated toilet compartment, in which wet deck clothing is also stored for drying, is located on the port side abaft the wheelhouse. 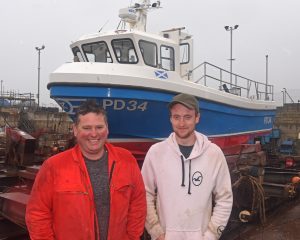 Arbroath skipper Tommy Yule and his son Tommy prepare to take Onward S off Peterhead slipway, before starting to fish from Arbroath.

Arbroath shellfish skipper Tommy Yule and his son Tommy are the new owners of the previous Onward PD 349.

Renamed Onward S PD 34 when her replacement was nearing completion at Southampton, this fast static-gear boat is based on a Cygnus Cyclone 30.

Onward S will replace skipper Tommy Yule’s previous boat, the Kingfisher 26 Lichtie Lass AH 2, which he took delivery of from Kingfisher Boats in 2009.

Onward S is powered by an Iveco NEF 280 engine that drives a 22in-diameter four-bladed propeller through a Twin Disc 2:1 reduction gearbox.

A 1t Spencer Carter slave hauler is central to the vessel’s self-hauling and shooting system. 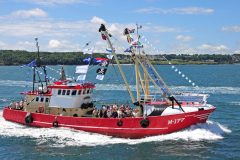 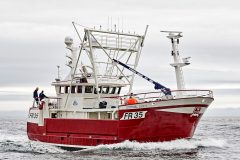