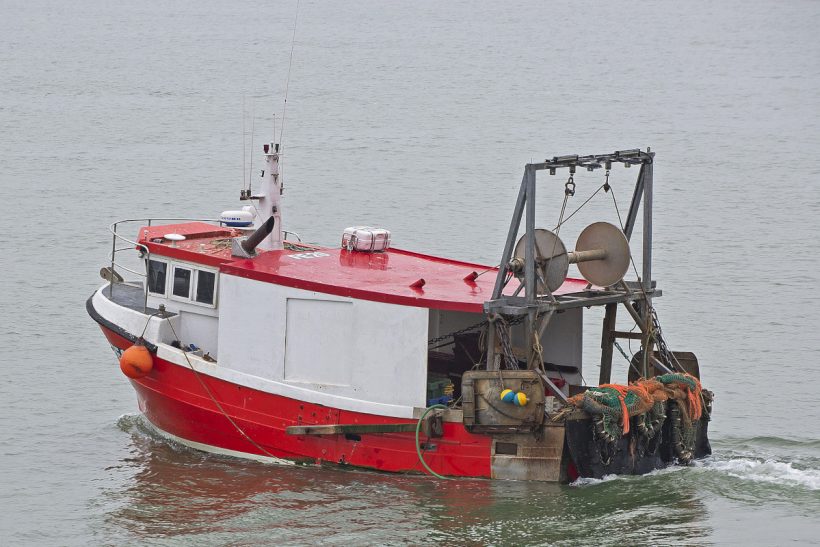 The Noakes family is highly respected for its hard work and dedication, sustaining the local fishing industry through frequently challenging times. 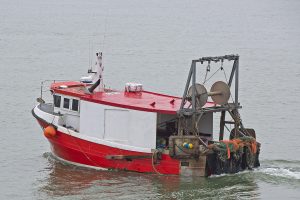 The Cygnus GM33 Valentine works triple-rig trawls for flatfish off the Kent coast.

Its inshore trawler Valentine FE 20 is a Gary Mitchell-designed GM33 built by Cygnus Marine at Falmouth in 1999. The GRP hull has an LOA of 9.9m and a registered tonnage of 11.82t.

The Noakes’ association with fishing and Folkestone goes back some 70 years. Terry’s dad Valentine moved to Folkestone from London in 1950 and started to fish whelks, crab and lobsters. After this initial learning curve, he eventually got his own boat and decided to go trawling, which the family has continued to do ever since. That boat, built in 1955 in Battle, East Sussex as Highland Princess, had its name changed to Fair Chance due to another vessel having the same name registration. It is now a houseboat in Malden in Essex.

His son Terry showed interest in fishing from childhood, and often went to sea with his father. “Sadly, in 1982 my father lost his life, two days after Luke was born,” said Terry. “We were out fishing in Hythe Bay, and he went over the stern as he was shooting the net. I tried to pull him in, but was unable to save him.

“It was such a sad time for us all, but the support we got from the Folkestone fishing community was amazing. Traditions die hard, and I decided to carry on myself.

“It was on 23 March, 2013 that we started to fish with the GM33, and we named it Valentine FE 20 after my late father. Luke, like me, started to show interest from the age of four, and I could see that he was eventually going to follow in my footsteps. 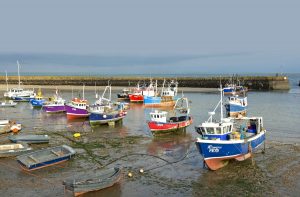 Valentine waits for the tide, moored alongside the local fleet in Folkestone’s tidal harbour.

“In 1982, Roland Gammon, who ran the local fish auction, put his business up for sale. Six of us got together, and we purchased the company and called it Folkestone Trawlers.”

Terry remained a director until his recent retirement.

“At the age of 11, Luke was working in the shop filleting fish – I am so proud of Luke and what he has achieved. I look at the future and, sadly, I do not see youngsters wanting to do what he has done,” said Terry.

This is shown by the decline in the number of fishing vessels working from Folkestone today. There are now six full-time fishing boats in Folkestone, where there were once 22. Currently, four work single-handed.

“If only we could attract more youngsters into the business – we have the experience to educate them, and give them the support of our local fishermen’s association. We will keep trying,” added Terry, with a smile.

Going to sea overnight with Luke gave an excellent opportunity to see how he operates Valentine. His dad Terry came along to show some moral support.

Folkestone is a tidal harbour, and Luke had to wait until 7.30pm before he could slip the mooring and get underway, after boarding Valentine from his well-used skiff. 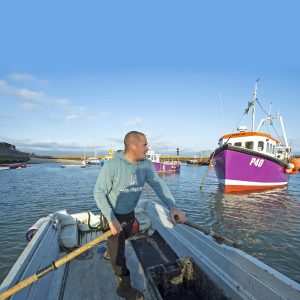 Skipper Luke Noakes rows the skiff away from the quay across to Valentine.

The plan for this trip was to steam southwest for five miles before starting to trawl between Hythe and Dungeness.

There have been issues relating to fishing in the Hythe Bay area that have caused concern for all over the past seven years. Lengthy discussions with Natural England and the Environment Agency, that included visits from relevant fisheries ministers, have taken their toll. It was all to do with natural mud, and the claim that it moved due to trawling, when in fact it was due to the tides.

Terry said: “I almost reached breaking point due to the amount of stress this has caused, with sleepless nights, and the extra funding required, often out of one’s personal finances. We have a strong association here, and we pulled out all the stops in the process. Our MP, Damian Collins, was very helpful throughout, and he even spent a day at sea with us. The good news is that we won in the end – after seven wasted years – and as a result, you can now see us making a heading towards Hythe Bay.

“It is so sad that we had to go through all this, especially as we have made a point to fish sustainably. The good news is that Luke has a positive future to look forward to, and that’s what counts!”

Luke uses a triple sole rig to catch flatfish, which is his primary aim. Rigged on 3in rubber discs, the three nets are spread by a set of No. 4 Bison trawl doors. Sweep configuration consists of 50 fathoms of 12mm bridle (worm wires), 20 fathoms of splits, and one fathom of heavy metal 20mm clumps. The two outside nets are eight fathoms, and the middle one is 11 fathoms.

When Valentine entered Hythe Bay, the plotter revealed a water depth of five fathoms. When the engine speed was eased back, the gear was shot away, before Valentine settled in to the first tow, heading east at a steady 1.75 knots. After about an hour, the hydraulics were clutched in, ready to haul. 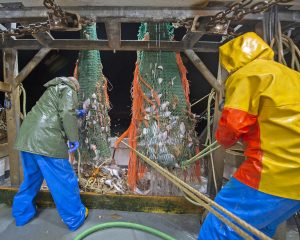 Releasing the starboard and middle codends after the first tow of the night.

On taking the three codends and releasing the catch onto the deck, the gear was quickly shot away again before Luke and Terry started to work up the catch. As expected, this consisted of mainly flatfish, including sole, plaice, skate and turbot.

Geoff Lee, who was taking photographs, observed: “On this occasion, Luke had his father onboard, but one could see just how much work is involved when fishing single-handed. Eyes have to be all over the place, and safety is of paramount importance. We were lucky with the weather that night. Terry mentioned to me that often, this part of the coast does have high sea states. It is important to remember that weather frequently impacts on fishing time, further compounding the constraints of working from a tidal harbour.”

The hours of darkness dictated how many tows Valentine would achieve, before flatfish followed their customary practice of staying buried during daylight hours.

During a trip lasting 10 hours, five tows were completed. What was also interesting was that Valentine was the only vessel fishing in Hythe Bay.

Terry said, “We have seen the demise of many vessels along the coast. There is only one beach boat working from Hythe, and Dungeness has seen many well-established fishing families hang up the nets. Going east, there are a few odd beach boats left, and Ramsgate has problems all the time with vessels from France making up their own rules when it comes to regulations. People seem to forget that to keep a fishing boat operational is a costly business.

“Valentine passed its five-year MCA survey in February. Luke is very strict in keeping it up to date with its daily, weekly and monthly maintenance schedules. He mainly sails single-handed, so he needs everything to be working. More cost is involved in replacing parts that look worn, or are coming to the end of their life. When not at sea, this takes up a lot of his time.”

Between tows and while returning to Folkestone, the fish were gutted, selected, washed and boxed. 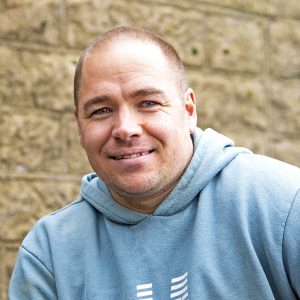 Back at Folkestone, Luke and Terry had to wait until high water at 7.30am before mooring up and lowering the legs amidships, to keep Valentine on an even keel when the boat dried out a few hours later.

The hardest job of the day for Luke was offloading the night’s catch into the skiff. He then rowed across to the slipway and put the catch into his van for delivery to the processing house. Folkestone Trawlers takes some of his catch to sell via its shop on the quay, and the rest, after being processed, is exported to France.

Another surprise on the day was the appearance of the inspection team from the Marine Management Organisation (MMO), who turned up for a routine inspection of his catch. “They often pop along, and it is something we have to accept,” said Luke.

Terry added to this by saying, “We have no objections to them doing this, and they do support us with any issues we may have relating to Valentine. However, I do share concerns relating to the Kent and Essex Regional Inshore Fisheries and Conservation Authority (IFCA).

“We know where they are coming from, but sadly, I feel that inexperience, due to the age of some of the officers, shows. We all have to learn, but fishing is a long-established industry, and we do know how our industry operates. Respect, and a working understanding, are the name of the game.”

How do Luke and Terry see the future of the fishing industry? “We have got to get Brexit sorted. If we don’t, I can see that Folkestone will have no working fishing vessels in 12 years. The French and Belgians are fishing on our doorstep, unseen. Reported sightings, positions of vessels and names get collected, and yet nothing deters them. One rule for them, and one for us.” 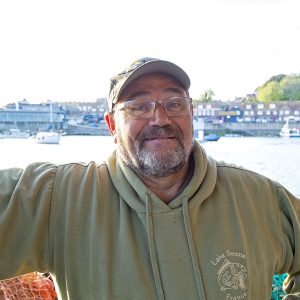 … and his father Terry Noakes.

Luke referred to the Folkestone Trawler Race, which has now become an annual event. “We set it up for the fishermen, so that they could be seen. Folkestone is popular with tourists in the summer, and the harbour area attracts many. We still have the cockle and whelk stalls, which have been part of our heritage for many years. We have our fifth race on 17-18 August, which attracts boats from other regions. We raise funds for the Coastwatch team here, along with the RNLI. It has become a really fun two days, and is good for the town and the harbour – flour bombs and all!”

Another hidden talent that Terry has are his artistic skills. He recently started painting and drawing again, having attended art school in his younger days. Now he has retired, as well as looking after the grandchildren, his artwork graces the walls of the local Fishermen’s Heritage Museum and Folkestone Trawlers shop. Terry’s wife Carol still helps at the shop, and keeps Terry up to date with the gossip. “She has been a real soulmate to me, especially during the Hythe Bay issues!”

Something that Folkestone has been involved in for decades has been supporting the Channel swimmers. Currently, there are three fishing boats involved, and they escort the swimmers across. “We know the waters and currents well, and we act as a pilot boat for each swimmer. Once in France, we pick them up and return them to Folkestone. It is still very popular, and many swims take place each year, although it does not get the publicity it used to get,” said Terry.

Both Terry and Luke would like to see the development of a means of getting schools and colleges more involved in educating youngsters about what they do. “Luke is a typical example of how it can be done,” said Terry. “He was young, keen and dedicated. You have to be practical, and go on a boat to see how they work. Health and safety is important, but if you impose too many restrictions, fishermen will suffer due to extra costs to meet these requirements, while trying to encourage new blood as crew members.” 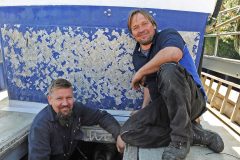 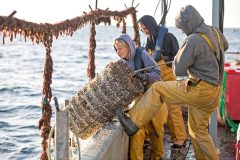