Prime minister Boris Johnson has pledged that fisheries will not be traded away in Brexit negotiations, and that access to markets will not be linked to access to fisheries, reports Tim Oliver

He also promised, during a visit to Scotland immediately on becoming prime minister, that the UK will leave the CFP by the December 2020 deadline. And he slammed the SNP over its fisheries policy, claiming that the party is ready to hand back control of fisheries to Brussels (see below).

During a visit to the naval base at Faslane on the Clyde, he was asked if he could ‘guarantee’ that the UK would be out of the CFP by the December 2020 deadline, and that access to UK fishing waters would not be linked to future trade deals with the EU.

“I can,” he said, reported the Press and Journal.

The PM’s pledge reinforced comments he had made earlier in the Commons in reply to a question from Conservative MP Owen Paterson. The former fisheries minister told Mr Johnson that recent comments by ministers had suggested that Brexit negotiations would involve the CFP being used as a bargaining chip.

He asked the prime minister to confirm that on the day of Brexit, we will establish total sovereignty over our EEZ and all its resources, become a normal maritime nation like Norway and Iceland, and negotiate reciprocal fisheries deals annually.

The prime minister replied, “We have a fantastic opportunity now to take back control of our fisheries, and that is exactly what we will do. We will become an independent coastal state again, and we will, under no circumstances, make the mistake of the government in the 1970s, who traded our fisheries away at the last moment in the talks. That was a reprehensible thing to do. We will take back our fisheries, and we will boost that extraordinary industry.”

Fishing for Leave and the SFF both welcomed the PM’s assurances.

FFL said: “It was good to hear Mr Johnson say that we will take full control, and that fishing won’t be traded away as part of a wider agreement, as Ted Heath reprehensibly did.”

It said it would hold Mr Johnson to his assurances, and stressed that the government must take full advantage of national control when it is achieved, and repatriate ‘all our resources, worth £6bn to £8bn, to help rejuvenate our coastal communities’, rather than just maintain the status quo.

SFF chief executive Bertie Armstrong welcomed the comments made by Mr Johnson during his visit to Scotland.

He said: “We have been looking for a straight and direct answer, and that’s exactly what we have got. Scottish fishing’s sea of opportunity lies on the other side of Brexit.

“The Scottish government commissioned a study in the middle of 2018 which came to the conclusion that the sea of opportunity represented £500m per year and 5,000 full-time equivalent jobs, so we absolutely embrace these guarantees.”

SNP under fire over EU and fisheries

During his visit to Scotland, Boris Johnson criticised the SNP’s policy of wanting Scotland to rejoin the EU, and the effects this would have on the Scottish fishing industry.

He said, “They are committed to handing back control of Scotland’s fantastic fisheries to Brussels, just after Scotland has taken back control of its fish, and is able to galvanise and to turbo-charge the Scottish fishing industry.”

He said that the policy was ‘bizarre’ and did not make sense for Scotland.

The SNP also appeared to wobble on its fisheries stance during an interview on the BBC’s Today programme on Monday last week, when Scottish finance secretary Derek Mackay appeared to suggest that an independent Scotland could give back control of its fisheries to Brussels in exchange for EU membership.

He had been questioned about a previous attack on the SNP’s policies by Boris Johnson, in the Commons the week before.

Martha Kearney asked: “Is it your commitment to hand back control of Scottish fisheries to Brussels? I have spoken to those who work in fisheries in Peterhead, and they are in favour of Brexit because of the EU’s policies on fisheries.”

Mr Mackay replied: “Scotland has voted to stay inside the EU, and even those who voted to leave in the rest of the UK, do they want a recession? We voted to stay within the EU. We accept there are trade-offs in any deal.”

The SNP minister then backtracked, saying, “No, I’m not – Scottish fisheries have actually been exploited by successive UK governments. And even in Scottish fishing communities, they voted to remain in the European Union.”

Banff and Buchan Tory MP David Duguid accused Mr Mackay of letting the ‘cat out of the bag’ by confirming that the SNP would ‘sell out our fishermen in a heartbeat’.

And Highlands and Islands Tory MSP Jamie Halcro Johnston said: “This is a huge blunder by Derek Mackay, and shows just how far removed the SNP now is from representing the interests of coastal communities like those in Shetland.”

Mr Mackay’s spokesman said: “No one can trust what the Tories say on fishing. They described the industry as expendable when the UK entered the EU, and have already broken promises they made in the aftermath of the EU referendum. The SNP will always stand up for Scotland’s fishing communities, while the Tories pursue a catastrophic no-deal Brexit which will cost jobs and hit communities across Scotland.”

Fishing is certain to be one of the most difficult issues the UK will have to face when detailed negotiations begin after Brexit.

This has been clear for some time, as the European Fisheries Alliance has repeatedly called for the status quo on quota shares and access to be maintained. It is also adamant that market access for fisheries products must be linked to fisheries access – a stance that was highlighted last week in comments by French agriculture minister Didier Guillaume.

He told French television channel Cnews: “It is possible that with Boris Johnson, we will have a hard Brexit.

“What matters most, in my industry and in the event of a no-deal Brexit, is the impact on the fisheries sector and on French fishermen.

“So I will keep telling Britain that our fishermen must be allowed to keep fishing in its waters.” 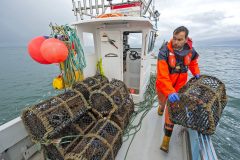 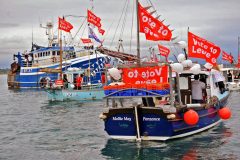