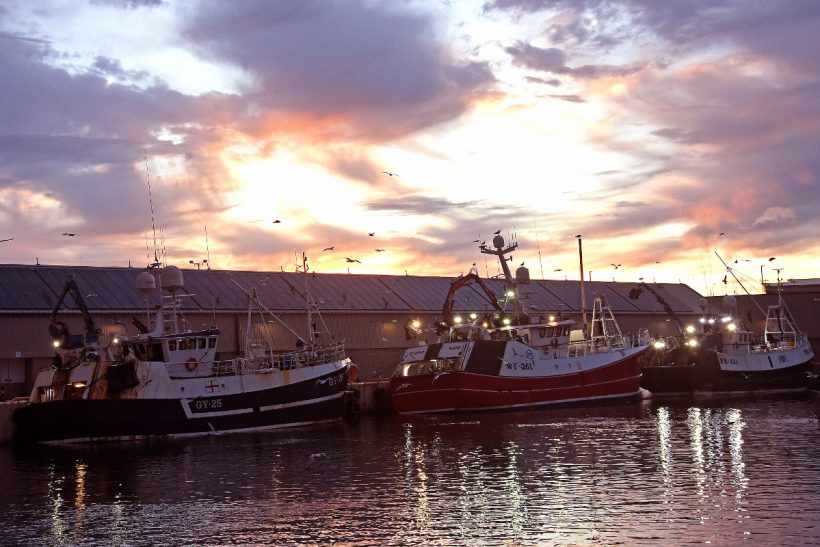 Quality and efficiency to the fore in new Peterhead fishmarket

In terms of scale and standards, the new whitefish market at Peterhead sets new benchmarks for quality and efficiency, both in the UK and in Europe. David Linkie reports

The first sale in Peterhead’s new fishmarket on Monday, 18 June marked the culmination of more than five years of intense effort and planning by the board and management team of Peterhead Port Authority.

Leading image: The dawn of a new era for Peterhead, as Jubilee Spirit, Our Lass III and Endurance land whitefish into the new market a few hours before the first sale.

The rows of boxes, neatly laid out 47-deep from front to back on the market floor, with their prime-quality contents glistening in the brightly-illuminated market hall, created an immediate and impressive sight as buyers entered the building for the first time. A vibrant buzz and a sense of occasion were shared by all present, notwithstanding that many had been associated with landing, selling and buying whitefish on Peterhead markets for nearly 40 years. 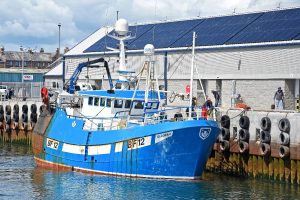 The Fraserburgh twin-rig trawler Ellorah BF 12 was the first boat to land to the new market in the North Harbour.

Less than 72 hours earlier, the same people had walked off the Merchant’s Quay fishmarket for the last time. The fact that such a seamless change was accomplished over the space of a weekend bears testament to the intense practical effort that the market staff put in over a very tight timescale, and to the willingness of everyone to work together to make the transition as smooth as possible.

This ‘can-do’ attitude reflected the similar sense of common purpose that prevailed during the preceding 18 months, when Peterhead harbour at times embraced six separate building sites.

This degree of construction work reflects that building a new fishmarket, over half a mile away from the previous one, was just one part of the integrated and multifaceted North Harbour Development, which at £53m has the distinction of being the biggest project undertaken by Peterhead Port Authority.

Having identified the need for a new state-of-the-art fishmarket that would increase continuous sales capacity to around 10,000 boxes (50% more than that available in the Merchant’s Quay market), in line with resurgent whitefish stock levels in the North Sea, the board then had to find a suitable site, both in terms of land area and of 24-hour access for all classes of whitefish vessel.

This search quickly focused on the North Harbour. Although the first requirement was readily available, the second, that of deepwater berthing for the modern class of whitefish boats that forward-thinking skippers were investing in, was more of an issue. This was subsequently addressed by doubling the depth of water in the North Harbour from -3.2m CD to -6.5m CD.

It was achieved by largescale dredging by a jack-up dredger, which in conjunction with three hopper barges, excavated some 125,000m³ of rock from the bottom of the harbour. All of this material was immediately used to reclaim 32,000m² of land, which is now protected by heavy rock armouring, to the west of Smith’s Embankment quay in Peterhead Bay.

Before work to increase the water depth could begin, which was entirely carried out in the wet, with no disruption to the port’s well-used shiplift and slipway facilities, over 700m of quays in the North Harbour were reinforced.

Some 1,000 circular steel reinforcing piles (16.5m long x 700mm diameter) were lowered into holes bored 4m down into the bottom, before sections of piles were then faced along their entire length, above low water level, to form a continuous concrete capping.

At the same time as the approach channel leading from the Albert Basin to the North Harbour was deepened, previous pinch points in terms of width were widened, at the Canal Junction and on the east and west piers under the control tower, to give easier access for bigger whitefish vessels. 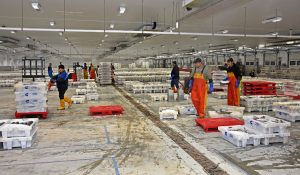 Crews laying out their shots.

This work, together with the reinstatement of the Queenie Bridge, which is now at an advanced stage of completion and not impacting on vessel movements, is expected to be finished by early September, before the prestigious North Harbour Development is scheduled to be officially opened on 29 September.

Stacked two-high, the new fishmarket has a working capacity of around 10,000 boxes, which will ensure that boats will be able to land on the day they come in, which was not always the case under the previous arrangements.

The bottom section of the market, next to the quay, has space for 26 boxes, with 21 boxes in the upper half. A full-length drainage channel runs along the midway point, while a wide walkway is arranged at the top, leading to the lorry loading bays, which are fitted with self-levelling ramps.

Steadily increasing annual supplies to the market, in line with healthy and sustainable stock levels, and in some instances increased quotas, were clearly a catalyst for the move towards a bigger and more efficient market. One week after entering service, a modern day record total of 8,549 boxes were traded on the market floor, further underlining the need for the expansive new facility.

It is important to recognise that in an average week, some 66% of the fish sold (upwards of 20,000 boxes) holds MSC accreditation, in the form of North Sea cod, coley and haddock. The point-of-sale value of these, and all other species landed by boats that are members of the Responsible Fishing Scheme, can be expected to rise further, as buyers of all descriptions, including well-known supermarket groups, are encouraged by the quality of fish available, and the best-practice working arrangements now being implemented on a market that also has HRC certification.

The important role that the new fishmarket, together with the wider North Harbour development, will play in the local community in years to come, was recognised when harbour master Captain John Forman donated £1,000 to local charities following the sale of the first box.

The donation was shared equally between the two main charities in the port, the local Fishermen’s Mission and the RNLI.

The first box, one of five of large cod that the trawler Nordfjordr BF 830 consigned to Peterhead, was sold by Don Fishing salesman Ian Petrie to Graeme Tallis of GT Seafoods for £132. 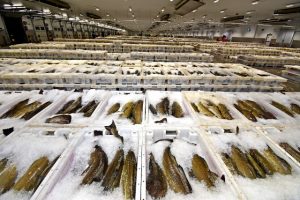 Well-presented fish makes an impressive sight in the new market.

John Wallace, PPA’s outgoing chief executive, whose vast experience proved invaluable during the formative and constructive years of the North Harbour development, said: “The first sale in the new fishmarket was very much a ‘Blue Flag day’ for Peterhead and everyone connected with the local fishing industry.

“The new facility is not just a step-change, it’s another galaxy, and clearly establishes a benchmark for seafood quality.

“The fish is very well illuminated by high-intensity lighting, which together with the hygienic white wall and ceiling panels and stainless steel surrounds, gives an immediate impression of high-quality fish. It is also pleasing to see considerable access room around the product, enabling buyers to move quickly and easily between sales, without the need to walk across boxes, a practice that is finally consigned to history. The initial impression is of already being in a supermarket, which can only be good news going forward in the long-term.

“The new fishmarket represents a major change for people involved in the industry. That this move was met with a very positive attitude, and the full cooperation of all involved, including fishermen, auctioneers/buyers and transport people, to make it work, is highly gratifying. 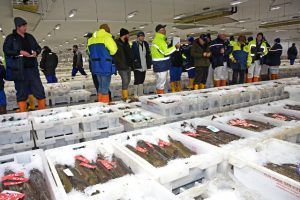 Salesmen and buyers were quickly into their stride.

“There was a real buzz on the first morning to see such a major project come to fruition.

“Over the coming weeks, it is down to us to fine-tune working arrangements, from the point of landing to distribution from the market, to ensure that maximum efficiency and quality are gained from what is truly a fantastic resource.

“It is great to see Peterhead leading the way in such a positive manner, which will further lift the quality of UK fish in years to come. This is the first step along a new pathway, which, given suitable support for local fish processors, will help the industry to go from strength to strength.

“Many bodies, including Seafish and Seafood Scotland, and not least, every member of the PPA team, have contributed to this project, experience of which we are now more than happy to share with other ports, for the mutual benefit of the industry.”

Read more, with extra pictures, in this week’s Fishing News 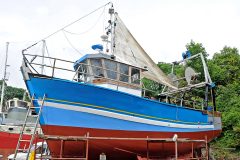 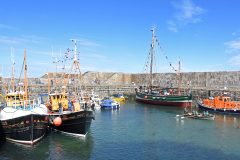