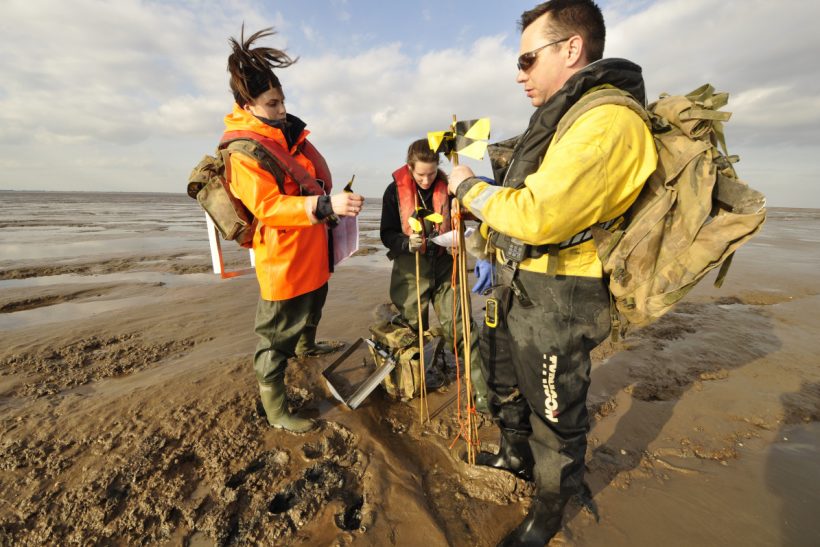 Slipper limpets – slipping and sliding in the Wash

A pre-emptive strike is underway on the east coast. John Worrall reports

It’s a good place for shellfish, the Wash. Most things with a shell like to be there.

Swirling currents stir food brought in by four sizeable rivers, and although those rivers carry far less nutritional effluent than they used to, the Wash remains a land of (cyclical) plenty for cockles, mussels and shrimps. 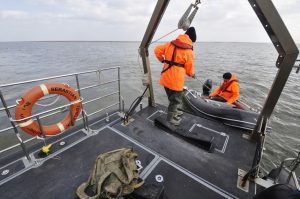 The tender is launched from Sebastian Terelinck.

Unsurprisingly, despite attempts to limit free movement, some incomers have, so to speak, slipped in – for we are talking here about slipper limpets Crepidula fornicata, which strictly speaking are a type of snail.

Originally native to the eastern seaboard of North America, they were first recorded in the UK in Liverpool Bay way back in 1872, having reportedly arrived with a batch of oysters – because, like all limpets, they need something firm to cling to, and other shellfish, if big enough, are ideal.

Today, they are found around the southern half of Britain, south of Anglesey and Spurn Head, and they have no known predators, not even man, because although they are edible – in that they are not poisonous – they have no recognised commercial value, despite the efforts of radical chefs to promote recipes.

The animal itself, at first glance, is slightly boring. Adults are generally about 5cm long, with a shell that, when inverted, looks like a slipper, or even a boat, but its brown or cream colouration tends to be muted by the mud which often surrounds it, making it less distinctive than the blue sheen that gives the blue mussel Mytilus edulis its full appellation.

But slipper limpets do have two distinctions among shellfish, and a clue to one of them is in that Latin name, C. fornicata, because while most snails release eggs and sperm into the water and hope that some get together, slipper limpets have sex which, for a static creature, requires proximity – and a long penis.

And that explains the second distinction, which is that they are usually found in chains or stacks of a dozen or more, growing one on top of the other – there are stories of 25 or 30 together – and the limpet at the bottom is always a female, whose eggs are fertilised by the extended penis of the next male up the stack. 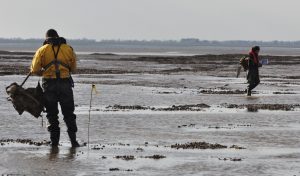 Then slipping and sliding along them…

If all of that sounds like too much information, they also go in for sex changes.They are protandrous hermaphrodites, changing from male to female when circumstances demand, in particular, when the female at the bottom dies and the next limpet, still clinging to her empty shell, becomes female, if not already so. Sex change takes about 60 days, and only occurs in the lowest male in a stack. Sadly, redundant penises do not have any commercial value either.

A female produces up to 12,000 eggs at a time, which are kept underneath her shell and attached to whatever she is clinging to, and incubation takes two to four weeks. After that, larvae enter the water column for a relatively long – for shellfish – four to five weeks, allowing wide distribution, particularly in the swirling Wash.

If a juvenile settles on an established slipper stack, it develops as a male and may remain thus for up to six years, maintained in that condition by pheromones released by females lower down. But if it settles on a stone rather than another slipper, it may briefly be male, but will change rapidly to a female, and start secreting pheromones to attract other larvae and initiate a new stack.

Much of the ground in the Wash is mud and sand, to which slippers cannot attach, but the gullies have patches of mussels, dead and alive, which provide initial anchoring points – and over the past year, Eastern IFCA has found localised dense accumulations of slippers during mussel and cockle surveys.

Until now, they have not been a particular problem for commercial fisheries, because although they compete for food and space, their presence is still widely scattered. But there might come a time when densities are sufficient to become a problem for nearby commercial mussels lays. There is evidence of substantially reduced growth and survival rate in mussels with slipper limpets attached – it’s harder to open the filter door if several freeloaders are stuck to it – and then, of course, there is the by no means minor consideration of the time and effort necessary to remove them from commercial harvests. 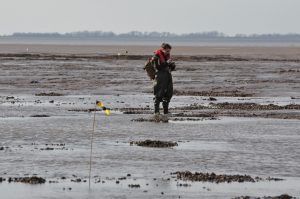 Slippers have also occasionally been found attached to cockles, although cockles are small for the purpose, and the potential threat to that fishery is not considered so pressing. But slippers have also been seen attached to whelks and even crabs, and such mobile species can only promote wider propagation.

So EIFCA is looking to stem the spread by reducing the thicker concentrations, even if total eradication probably isn’t possible. One of the few known successful eradications took place in the Menai Strait, where slippers were found to have been present in a batch of re-layed mussel seed, and the local industry went for the nuclear option of dredging up that whole batch, slippers and all, and replacing it with a new batch, which effectively smothered any stragglers.

Such a removal strategy wouldn’t work with the more widely spread accumulations in the Wash, firstly because dredging would be too effort-intensive for the amounts presently involved, and secondly, because in breaking shells and chains, it could promote further dispersal, while creating bottom furrows that might encourage slipper settlement.

Removal will have to be done manually with rakes and nets (although subsequent smothering by sediment dredged from banks immediately adjacent might be an effective follow-up), and once removed, the slippers would be taken away for incineration. EIFCA is in discussion with waste disposal companies. 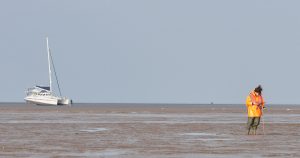 … and counting more, while a catamaran sits on the mud, waiting for the tide into Boston.

Timing is important, to the extent that although slippers can spawn at any time from February to October, they do so mostly in May and June. Accordingly, the EIFCA plan is to thin them out before this year’s spawning peak.

The first part of the plan, put into effect at the end of March, was a re-survey to make sure they were still where they had been last year – things do move around in the Wash – in particular, in gullies close to private mussel lays on the Roger and Toft sands near Boston.  Fishing News went along.

The EIFCA rib Sebastian Terelinck (Fishing News, 24 September, 2015), with a tender aboard, went out on a morning tide from Sutton Bridge on the river Nene, and after an hour anchored in the channel north of the Roger, where it waited for the sand to emerge. When it did, the tender, piloted by head of research Ron Jessop, ferried three be-wadered research officers – Elise Quinn, Rebecca Treacy and Peter Welby – along with the FN operative, to within wading distance.

Those Wash banks are heavy going for walkers, this particular part of the Roger being more mud than sand, and sticky with it. The gulley bottoms can be firmer, with those thin accumulations of dead or alive shellfish, but on the wider expanses, walkers slip about – so to speak – and loiterers sink in. And with the landing place that day half a mile from the plotted locations, there was a fair amount of both going on. 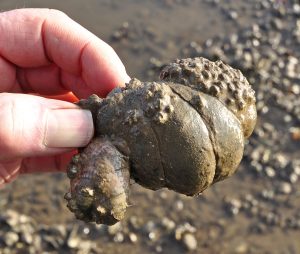 The gullies have lots of small stacks like this.

Slippers are mostly sub-littoral, and so there was only an hour and a half or so, straddling low water, to work with. The previous sightings had been plotted as traverses on chart printouts, and it was a question of walking some of those, and making a rough count by tossing stainless steel quadrats randomly at various points, and recording the numbers of slippers within them.

It wasn’t precise science, but it didn’t have to be to get a general confirmation of presence.

Removal by raking won’t be a one-off, because resettlement will inevitably follow, and the exercise will have to be repeated. But that in itself will provide regular monitoring of infestation levels, from which an adequate degree of containment can hopefully be achieved.

For this is essentially a question of containment. Slippers have been in the Wash for a while now, but have not yet reached the densities found on parts of the south coast, or in the Wadden Sea, where they are more of a problem. Their established presence on commercial mussel lays is still relatively modest, and the dredging and reseeding of those lays will, in itself, restrict infestation to some extent.

But if outlying colonies of slippers are allowed to develop unhindered in gullies across the Wash, it will mean far more larvae being released into that swirl of currents, and with their relatively long spell in the water column, those larvae will have a better chance of finding something firm to grab hold of. That something is increasingly likely to be among mussels within the many hectares of commercial lays – and then it becomes a numbers game, because a mussel with a chain of slippers attached to it isn’t much use to anyone. 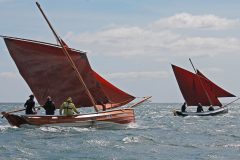 The revival of sailing cobles at Bridlington 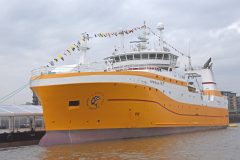 Proud day for Kirkella and Hull at Greenwich