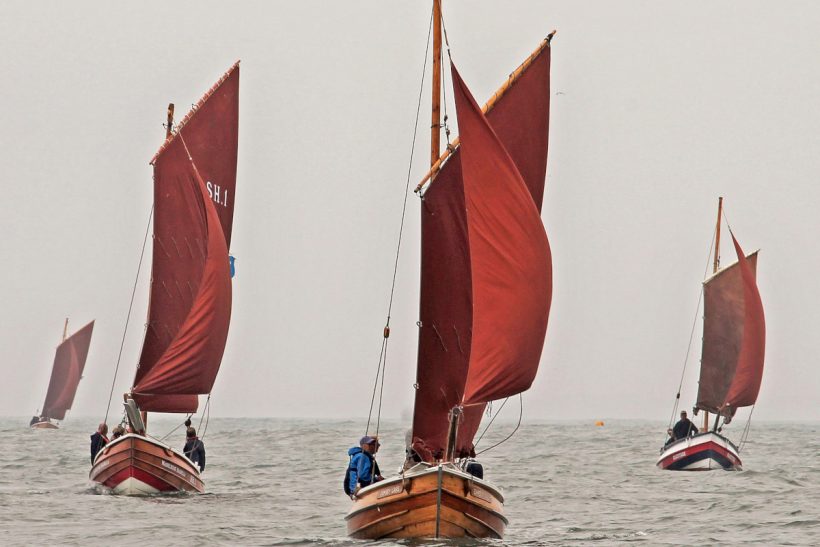 Challenging weather conditions put traditional sailing cobles and their crews to the test during the fourth annual Bridlington Sailing Coble Festival, which took place over the weekend of 27-28 July, reports Paul L Arro

Planning of the event had been in progress for many months, and final preparations had increased during the week leading up to it, which had seen some of the visiting cobles arriving early by road for the unique maritime event, which brought together the largest gathering of sailing cobles in living memory.

Providence arrived at Bridlington on the previous Monday by sea, after a seven and a half hour passage from Whitby, and the Paull shrimper Venture took up her moorings in the harbour after sailing from Barton-upon-Humber. An unofficial sailing day had been organised for the Friday preceding the festival so that visiting skippers and crews could get a taste of sailing in Bridlington Bay. 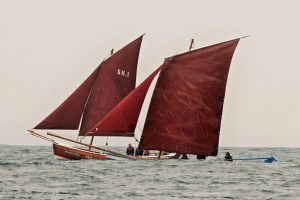 The coble Avail, which arrived the previous weekend, had taken the opportunity to round the headland to Flamborough’s North Sea Haven, which during the late 1800s and early 1900s was the major fishing station in East Yorkshire. She was spotted at anchor with what was thought at first to be an ingeniously designed but oddly shaped mizzen – it turned out to be a parasol to shield the crew from the intense, glaring sun.

While the sailing cobles were out in the bay on the Friday, the Tyne-based transom-sterned keelboat Granby arrived at the harbour, along with the restored ex-Tynemouth lifeboat Henry Frederick Swan ON 646. Their passage down the coast had taken them into Whitby for an overnight stay.

The association between the Tynemouth lifeboat station and Whitby goes back to the Rohilla rescue in 1914, when the Tynemouth lifeboat Henry Vernon was sent down to Whitby and was instrumental in the rescue of the last 150 survivors from the wreck. The 40ft ex-lifeboat made a majestic sight as she motored across the bay before gracefully coming through the piers and taking up her mooring on the Crane Wharf jetty. All was now set for an excellent weekend, with the glorious sunshine which had been constantly prevalent for the two previous weeks – until a thunderstorm broke at teatime on the Friday.

The first morning of the Sailing Coble Festival dawned with an overcast sky, heavy drizzle, poor visibility, and a north-north-westerly force 4-5 blowing. Eleven cobles put out from the harbour when the tide allowed at 10am, along with Granby and Gannet, the Bridlington Sailing Coble Preservation Society’s safety boat.

Conditions proved just a little tough for the foy coble Julie B, recently renovated and now based at Scarborough; she turned back into the shelter of the harbour. Grace did not put out either. 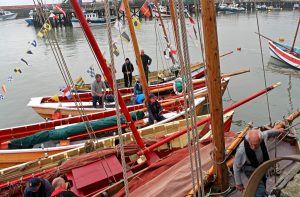 The remaining cobles made excellent progress in a northeasterly direction with some fantastic sailing, even though sails had been reefed down. The cobles made a glorious sight as they ploughed their way across the North Bay, and when off the South Landing of Flamborough, went about and headed back towards the harbour. On the return leg across the bay, the 101-year-old Henry Frederick Swan, which served the Tynemouth lifeboat station from 1918 to 1939 and again from 1941 to 1947, left her moorings and joined the fleet of cobles in the bay, as if to safely shepherd them back across.

On the quayside, outside the Harbour Heritage Museum, Jim Eldon, the ‘Brid Fiddler’, was keeping visitors entertained with his sea and folk songs, many with a local theme. Music and songs were also performed by musicians from Grace Church Bridlington. This year, for the first time, various stalls had been set up in the Harbour Commissioners’ vessel maintenance facility, which doubled as an exhibition hall for the festival to provide additional interest, including a model boat display, a marine artist, a local photographer, a display of traditional fishermen’s ganseys, a local author and book stall, together with the Bridlington Sailing Coble Preservation Society (BSCPS) stand.

Even though the tides were not great for the festival weekend, all the cobles took the opportunity for a further sail during the early afternoon, before the north side of the harbour dried out. There had been a distinct improvement in visibility by that time, and the heavy drizzle ceased, with just a glimmer of sunshine breaking through. Sailing members of the BSCPS were also able to get to sea aboard Three Brothers.

The weather improved for the start of the second day, although the wind had veered to a northeasterly force 3, which created a moderate northerly swell sweeping across the bay. The presentation of commemorative brass plaques to the skippers of all the vessels taking part in the festival was carried out in front of the Harbour Heritage Museum by BSCPS chairman Ian Thompson. There was not the dampness of the previous day, but the sun was very reluctant to make any sort of an appearance.

Ten sailing cobles left the piers behind around 10am and headed in a southerly direction across the bay towards the South Smithic buoy. Only the two smaller foy cobles, Julie B and Grace, stayed behind, as their owners correctly predicted that conditions would be too difficult for them, but the Tyne workboat Rose managed to make good headway. The northerly swell running across the bay was indeed making the passage interesting, but the sight of those cobles making progress was very impressive indeed. At times only the masts and sails were visible as they dropped into a trough, but it was a very exhilarating sail. 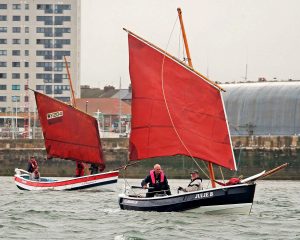 Providence and Julie B leaving the harbour.

Pastor Dave Mallender of the Grace Church Bridlington gave a blessing from aboard the Henry Frederick Swan, laid in the centre of the harbour, for the cobles and all those involved with the fishing industry, before carrying out an official duty at the request of a BSCPS member, who wanted her son’s ashes scattered at sea.

The ex-lifeboat then set a course for the South Smithic buoy, and what a magnificent sight she made once again as she motored across the bay. She certainly looked the part steaming past the returning cobles, and turning the clock back somewhat to when, in bad weather, the local lifeboat would be escorting the local fishing fleet home. Nearing the buoy, her mainsail was set, together with the previously rigged fore and mizzen sails, and a fantastic vision of times long ago was rekindled. When new, this class of lifeboat was the most modern and up to date of its time.

Once back in harbour, it was time to reflect on another excellent day’s sailing for all concerned, and to enjoy a welcome brew or cold drink in Rosie’s Cafe, together with banter on how the morning’s sail had gone. Everyone agreed that the festival had yet again been a great success, with some skippers trying to understand why another coble had performed somewhat better than their own, taking onboard any tips available.

There was time for one final sailing session in the early afternoon before the festival drew to a close, and Three Brothers was able to make a couple more trips with society members before it was time for her to get back on her berth. Crews then began the task of getting gear stowed, and visiting vessels prepared to be lifted out for the journey back to their home ports, with farewells being made to longstanding friends and new acquaintances.

The festival weekend has been declared a great success despite the weather. Soon, after the organisers have had time to take a breath, debrief and perhaps relax for a while, planning of next year’s event will begin. The weekend of 11-12 July, 2020 has already been set.

It goes without saying that the help and support of the Bridlington Harbour Commissioners and harbour staff is vital to the running of the festival; without that co-operation, the event would not take place. The support of all the sponsors is greatly appreciated and contributes to the success of the Sailing Coble Festival. 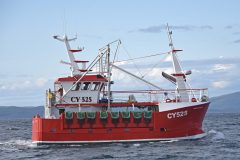 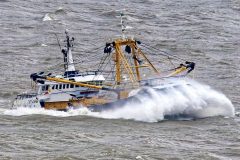