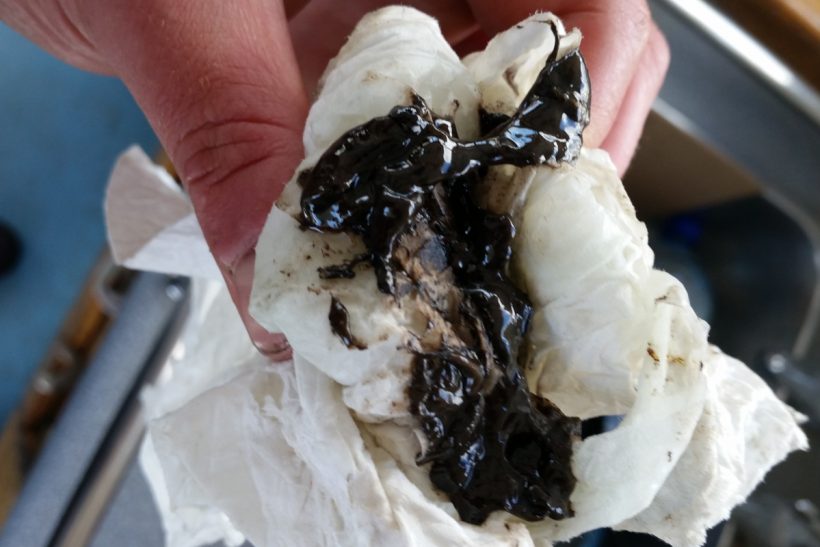 Peter Weide, director of MarShip, continues his occasional series with advice on fuel contaminants – and how to deal with them

Last time, we looked at the problems associated with modern diesel (Fishing News, 12 December). This month, we are looking at the contaminants in fuel, where they come from, and what to do about them.

By far and away the greatest contaminant in fuel is water. It comes from the atmosphere through condensation, the supplier, leaking fuel coolers and poor fuel storage.

Water is responsible for degrading the fuel, reducing the lubricant quality, and rusting the tank and fuel system components. It harbours diesel bug, and has even been known to explode the tips of fuel injectors, leading to catastrophic engine failure.

Lying in the bottom of the tank, the water reacts with the fuel, producing a very mild acidic layer which accelerates the degradation of the diesel, producing sludge. It can reduce the stability of the fuel, leading to the agglomeration of asphaltenes which settle on the bottom as more sludge, identifiable as a black, shiny, tar-like substance.

Water in suspension in the fuel will reduce the lubricating qualities of the fuel, and given that the lubrication in modern diesel is questionable at best (more about that next time), any reduction will negatively impact the life of fuel injectors and pumps. 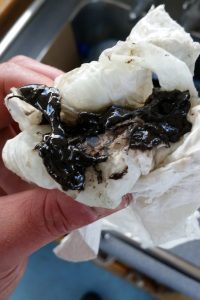 Asphaltenes are identifiable as a black, shiny, tar-like substance which settles on the bottom of the fuel tank.

Rusting? That speaks for itself on the bottom of the tank, but be mindful that saturated water in the fuel can settle in injectors and fuel pumps when the engine is stopped, which will naturally lead to early failure.

Last but not least, it harbours diesel bug. That’s the black slimy sludge you find on the bottom of the tank and in your filters. Engine failures are one of the most common reasons for rescue by the RNLI, and those engine failures are very often due to blocked filters from sludge, particularly diesel bug.

Diesel bug is the collective name for bacteria, yeast and mould. It doubles its number every 20 minutes, lives for 48 hours, then dies and sinks to the bottom to join the excrement from when it was living. You know about it when your filters start blocking up.

OK, so that’s in a lab under perfect conditions – but think about your fuel tank: very dark, very still, and gently warmed by fuel returning from the engine – well, that’s about as good as it gets for bacteria to start multiplying. You’ll know about it when you hit the breakwater.

The good news is that water is the easiest contaminant to remove – just open the drain cock on the tank regularly and drain off the water – it’s as simple as that!

If you don’t have a drain, consider getting a Diesel Dipper® with a Dip Tube. This will suck from the very bottom of your tank while your engine is running and at sea, so scouring everything – water, sludge and all – off the bottom of the tank.

If you know you have had diesel bug, you need to kill it with a biocide. Our DieselAid® B is a neat biocide with engine manufacturer approval. Don’t use a treatment that absorbs water into the fuel – that’s the last thing you want, especially on a common rail engine.

What of the other contaminants? Dust, dirt, rust, etc will be handled by your filter. There is more evidence now of poor-quality biodiesel giving waxing problems, which we will discuss next time, but it is worth noting that water can promote this waxing, so the importance of draining the water from your tank cannot be overstated.

Always remember: no water equals no bug (and mostly none of the other problems either).

Peter Weide, a marine chief engineer, was Exxon marine lubricants manager, and ship repair director and latterly head of sales for Wärtsilä UK. He is now director of MarShip, a company specialising in maintaining the vital elements of your engine – air, fuel and oil. It can be contacted through Fishing News or on: 01666 818791 or at: sales@marship.eu  Find out more at: marship.eu 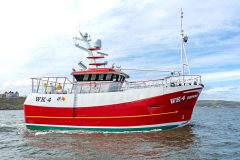 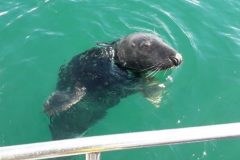