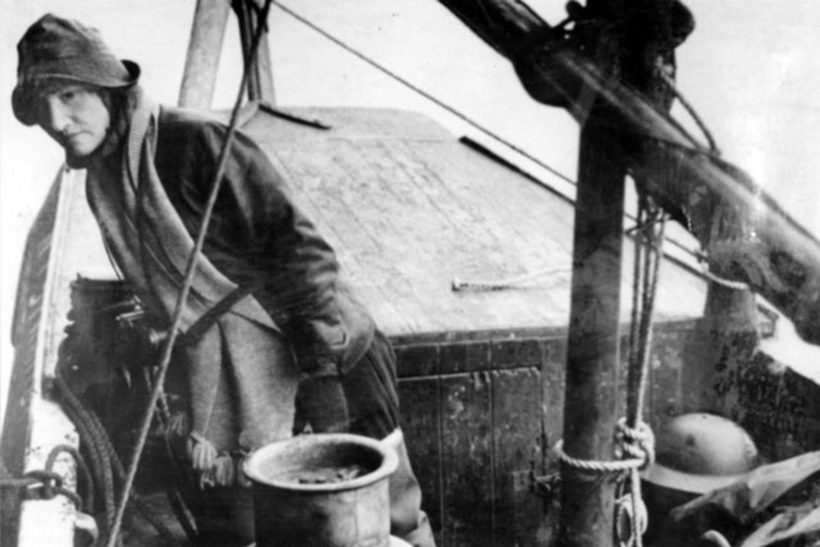 The life and times of Skipper Dora

Women had not long got the vote when Dora Walker became the North East’s first female coble skipper. Brian W Lavery charts the career of the woman who went wartime fishing with a pistol strapped to her waist

Dora Walker was born into genteel Victorian society, when young girls tended to have their lives mapped out for them. But Dora was a woman who charted her own course, and her longing for adventure would not be denied.

Born on 2 July, 1890, Dora was the tenth child and fifth daughter of textiles magnate John Ely Walker and his wife Elizabeth Mary of Mirfield in West Yorkshire.

At the outbreak of the First World War, Dora’s adventurous spirit was freed, and she escaped the humdrum of the small Yorkshire town where she had lived a cosseted and privileged life.

She joined the British Red Cross as a volunteer nurse, but it would not allow her to serve behind enemy lines, so she joined a Belgian field hospital working alongside Elisabeth of Bavaria, the Queen of the Belgians. Dora brought with her the gift of an ambulance from her wealthy family.

When the war ended in 1918, 28-year-old Dora continued to travel widely and completed a ‘world tour’, as many women of her class did in those times.

She was later to develop severe bronchial problems, and was ordered by her doctor to live by the sea, where the air would ‘do her good’.

Her love of Whitby, where she had often holidayed as a child, had never left her, and it was there she bought a cottage at the turn of the 1930s.

That sea air prescription must have done her the power of good, because soon she was showing an interest in fishing, and going out to learn the ropes with local fisherman Bobby Harland, along with her brother Colonel James Walker, a keen game-fish angler who lived nearby.

She later had her own boat, the Good Faith WY 97, built locally. 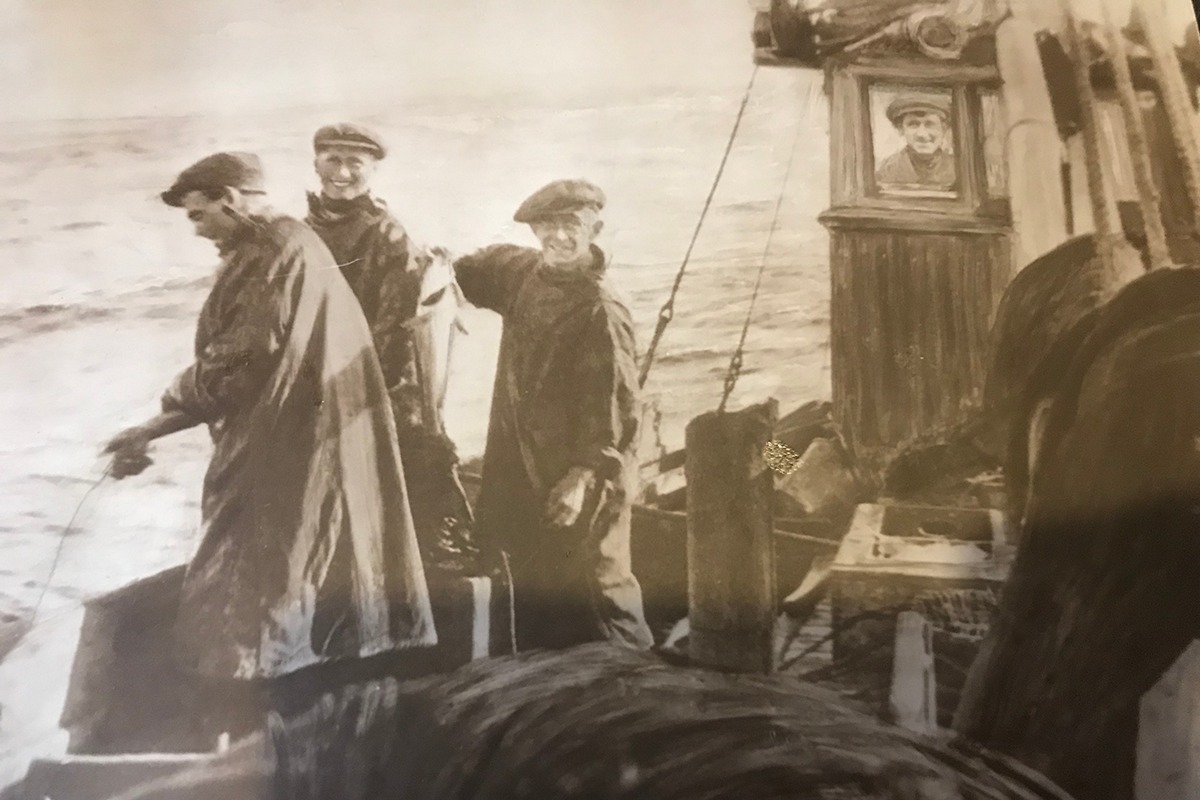 The Good Faith, in a picture captioned ‘a happy ship’ in Dora’s photo album. She can be seen in the wheelhouse.

In her autobiography, They Labour Mightily, Dora recalled: “The launching of the Good Faith was a minor incident in the affairs of the town, but a tremendous event to me.

“She was locally built by Frank Clarkson and designed like the big Northumberland cobles I had seen at the Farne Islands.

“She had a few accidents to start with, though the first was less an accident than bad management.

“She ran out of petrol after an 80-mile cruise, a mile and a half from home. Happily, a passing fellow fisherman gave her half a can full to save her the ignominy of a tow.

“But that tow came, however, later. With a rope firmly fixed in her propeller, she was obliged to signal for assistance.”

Good Faith was helped back to port by two local fishermen on that occasion.

Dora fished the Good Faith as skipper with local man Laurence Mirfield as her crew. Laurence was to prove a lifelong friend and mentor. 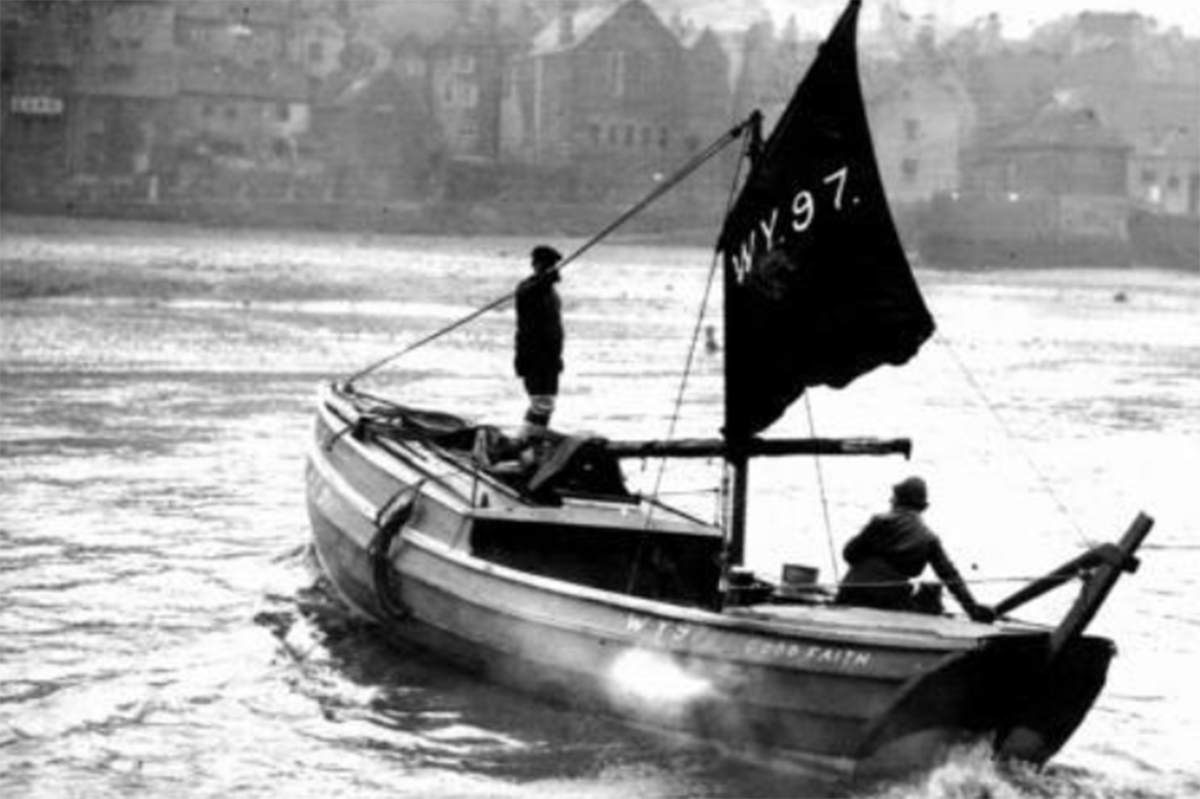 Dora skippering her coble Good Faith, which was built locally.

At first, the men of Whitby were suspicious and even scathing of Laurence Mirfield for working alongside Dora – as well as the regular sexism of the time, many fishermen also believed women to be ‘bad luck’.

But they came to respect and admire her when she proved to be very skilled at handling both longlines and crab pots. She was also a fine navigator.

She was soon known around Whitby as Skipper Dora.

She first realised her acceptance when a fellow skipper, unable to take his own boat out as the vessel needed repair, came to her for help.

Dora wrote later: “My proudest moment was when this recognition first came to me.

“One of the keelboats had engine trouble and the crew were unable to take their gear to sea.

“The skipper knocking at my cottage door asked me to do him that service while he remained to superintend the repairs on board his craft.

“Nothing could have kept me from the sea after that.

“We worked the gear and came in laden with fish. From that time, I was asked for help of that kind as often as anyone else after that.”

As well as commercial fishing for crab and lobster, and later netting for salmon and trout, Dora and her brother James garnered international reputations in the 1930s as ‘tunny fishers’ – big-game fishing that became a fad for the British aristocracy, military officers and their chums during that decade.

Tunny is the local name given to the Atlantic bluefin tuna, which was prevalent off the Yorkshire coast at that time. The British Tunny Club was founded in Scarborough in 1933 and had its headquarters there.

The Scarborough-born film actor Charles Laughton was a fan, as were newspaper proprietor Lord Astor and Baron Henri de Rothschild – one of the richest men of his time.

The tunny is arguably the strongest fish in the world, and was frequently targeted by big-game fishermen. Once again, Dora was beating the men at their own game. Local and national papers carried reports of the woman who caught record-breaking fish.

During the Second World War, the fad for tunny fishing dropped off dramatically. By the end of the war, fishing in the North Sea had greatly reduced local herring and mackerel stocks, which led to the disappearance of tunny from these coastal waters.

In February 1940, Dora took part in her first rescue, one of the most dramatic carried out off the Yorkshire coast.

She recalled in her autobiography: “It was on the bar that night at seven o’clock when the last boat came in with the North East wind behind him.

“I had changed to a velvet frock and was sitting in a warm lamp lit room relaxed and resting when at nine o’clock the lifeboat signal went.

“My cottage door flew open and a woman, the daughter of old Joe Tomlinson, hero of many a score of rescues in his day, rushed in with the wind.

“A steamer was aground off Saltwick Nab.”

The steamer was the Belgian vessel SS Charles, and she had been dashed onto the rocks at Saltwick Nab during a dreadful storm.

Because the younger men of the town had been called up, many of the fishermen left behind worked longer and longer hours. When darkness fell that night, there was still a keel boat unaccounted for, and others had gone back out to search for her. It was then that news of the SS Charles reached Whitby.

A lifeboat and the keel boat Provider went to the aid of the stricken ship.

Dora’s first attempt to join the rescue effort was prevented by a bizarre accident, when a man fell and landed at her feet from a crag above. By the time she had helped the man and he had been taken to hospital, both the lifeboat and the Provider had gone to the rescue.

Dora put brandy and Oxo cubes into a first-aid box and walked three miles through blizzarding snow to the cliffs above Saltwick Nab, where she met two fishermen at the clifftop. They were preparing a rope ladder for descent.

They explained that men from the stricken steamer – reported possibly washed overboard – were most likely to wash up there, given the current. They were later proven correct.

Dora trudged on another mile with her brandy and Oxo, which were welcomed by men on the shore trying to fire lines and a rocket to the Nab. She operated a searchlight for hours on end to help the men as they battled to save the crew of the SS Charles.

After seven attempts, a ‘breeches buoy’ was set up, and crewmen bobbed through the raging surf as Dora and others dragged and heaved on the ropes. Four men were rescued that way.

Six other survivors had got onto a liferaft. The lifeboat was sent out again to try to find the craft – but it came back alone.

Later in 1940, Dora went to the local fish company’s offices and found a Commander Richardson there showing a chart to local skippers including JR Storr, who was a famed tunny fisherman as well as a respected trawlerman.

Dora had heard that the fleet of keels was to go south, and from there across to France, to help evacuate the British Expeditionary Forces from Dunkirk.

Skipper Storr reportedly said: “If we need cobles, you can go, but they’ll be wanted to fish in our stead.”

So fish she did. Dora was issued with a tin helmet – which she never used, preferring to leave it atop the crab pots in her boat while at sea.

She cut quite a dash with a pistol strapped to her waist – there in case any Luftwaffe planes got too close. There had been reports of small fishing craft having German aircraft come as low as mast height in some incidents. But Dora never had need to use her pistol.

She continued to fish throughout the war years, and helped in many rescues at sea with the lifeboat crews and others.

At the end of her fishing career, she gave her loyal friend and crewman Laurence Mirfield and his son her boat, the Good Faith. 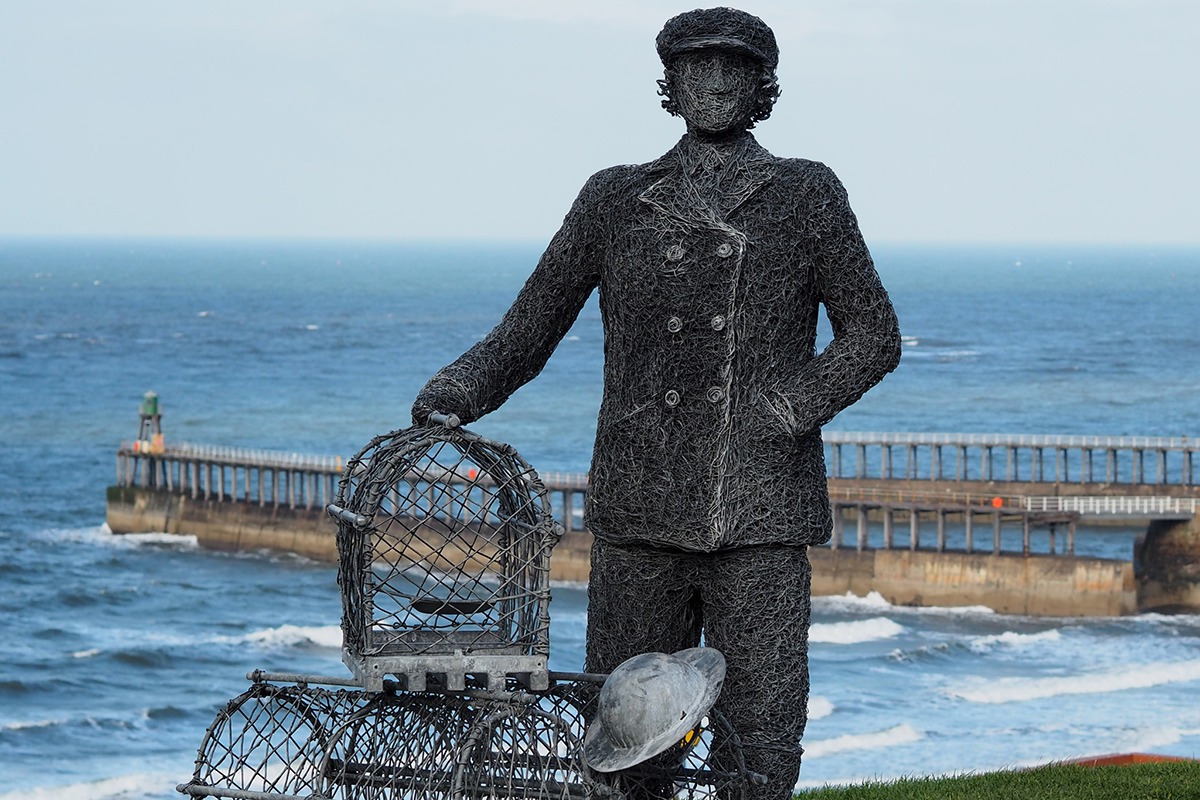 A statue of Dora Walker, by Emma Stothard, stands on Whitby’s West Cliff and forms part of the town’s Walking with Heritage Trail.

In 1953, she became the Honorary Keeper of the Whitby Museum, a post she held until her death. Many of the ship models she collected over the years were bequeathed to the museum. She also became president of the Whitby Women’s Lifeboat Guild.

She wrote three books: With the Lost Generation 1915-1919, Freeman of the Sea and her autobiography, They Labour Mightily.

There are many tales of how Dora helped, and in some cases saved, people in Whitby through her life. But one story that did not come out until after her death in 1980, aged 90, was how she had saved the whole town.

When fish prices plummeted after the war, she secretly convinced her father to buy fish from the town, staving off ruin for local fishing families – who never knew.

She created a company with her brothers and father to buy fish from the local fishermen at a reasonable price, often selling at a loss, to assist the struggling families without any loss of pride on their part.

Whitby Civic Society honoured her with a blue plaque at No 36 The Cragg, where she once lived.

There is also a statue to her in the Yorkshire fishing town she loved and served so well. 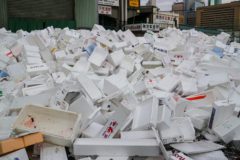 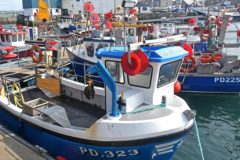