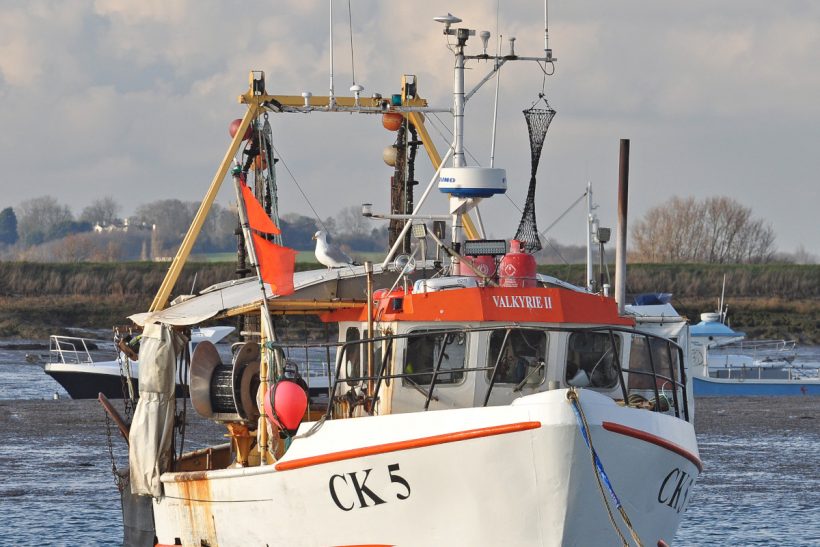 Valkyrie II and the single-ended spoils of war

At West Mersea, it’s about self-containment in the battle for survival. John Worrall reports

It’s summer in Essex, and the wind turbines turn more slowly. They don’t surrender the fishing ground they have taken, but if they are working for the greater good, then perhaps the fishermen’s loss is mankind’s gain. Hopefully, all other sections of society obliged to make sacrifices will be equally altruistic. 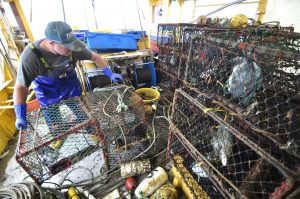 Single-ended pots on Valkyrie II’s deck, ready to be shot around wrecks some 20 miles from West Mersea.

Thirty years ago, West Mersea had a couple of dozen boats in the general fishery (and others doing oysters), but there are now eight, and the contraction is simply down to diminished opportunity.

The appearance of bass in big numbers a decade or two ago looked like the future for a while, perhaps even replacing the cod that are increasingly staying north in colder water. People bought boats accordingly. But although the fish are still there, and in increasing numbers, so now is regulation which, based though it may be on science that is anything but firm and persuasive, reduces catching methods to the least efficient. The fleet, and Essex University PhD students, are trying to change that, working on studies of bass spawning and growth rates, but for now, the dreaded precautionary principle rules.

But it doesn’t apply to predators which, a CEFAS bass-tagging project recently showed, are taking at least 20% of the bass stock (that is, mammalian predators took 20% of the tagged fish, as indicated by temperature readings, and those were only the ones where the mammal actually swallowed the tag). But seals look cuddly, and the tourists love them. So that’s all right – at least, it is in the eyes of some.

And then there is sole, long a mainstay of the southern North Sea, but obliterated for now by highly efficient Dutch pulse beamers. The European parliament voted twice to ban pulsing – because it is illegal under EU law – but only at the second attempt, early this year, did the Commission – and fisheries commissioner Karmenu Vella – agree to do so. But then, the commissioner was in the last year of his term, and would soon no longer be getting his ear bent by the Dutch pulse lobby. 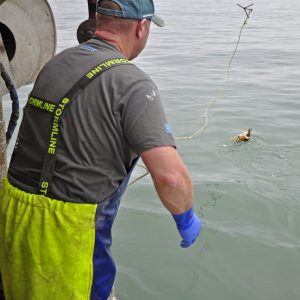 Half of the 84 active licences are being phased out this year, and the remainder by 2021. Pulsing will revert to the originally permitted maximum of 5% of any EU member’s beamer fleet for research purposes, which would limit the Dutch to a dozen or so licences. The upshot, nevertheless, is that sole catches have plummeted for those who choose not to electrocute everything on the seabed, and UK fishermen reckon that stocks will take a decade to recover.

Valkyrie II is one boat battling with all this. She started her career in West Mersea in 1989. The under-10m steel hull was built by Offshore Steel Boats at Barton-upon-Humber, one of several Mersea boats of similar provenance back then when times were better. This one was bought and fitted out by Derek Mole, part of a long-established West Mersea fishing family. He worked her for a few years before selling her on, after which she had spells in Grimsby, Guernsey and Weymouth, before being brought back to West Mersea by Andrew and Johnny French.

Theirs is another long fishing line; they are sixth- and seventh-generation fishermen respectively. Andrew’s grandad was still fishing under sail after the war, and things weren’t particularly high-tech even when Andrew started.

“When I started fishing in my teens in the 1960s, we didn’t have all the electronics like plotters and sounders. To gauge the depth of water, I tied a pair of old adjustable spanners onto a string and dangled them in. That’s how I navigated. There were charts, but we didn’t really use them until we got a bigger and better boat and needed to go further afield.”

These days, Valkyrie II does potting – a two-handed job in her case – a couple of times a week in the warmer months, and trawling in between, which Johnny does single-handed. 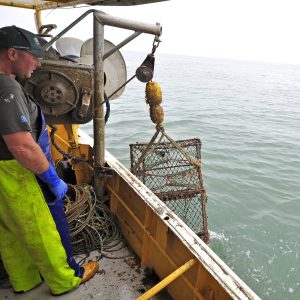 … before bringing the first single pot up…

On an overcast but calm potting day, Fishing News went with them, leaving on the beginning of the morning ebb and heading out for 20 miles and two and a half hours, out past the Gunfleet and London Array wind farms to the Barrow Deeps, where there are a number of wartime wrecks. It is close to those that they set their single pots, each with its own dahn.

“There are wrecks closer in,” says Johnny, “but there we get aggro with anglers hauling them and taking the lobsters.” No one sees them doing it, but an empty pot with the bait gone is a bit of a clue.

The problem further out, however, is shipping. The Greater Thames is one of the busiest shipping areas in the world, let alone in Europe, and always was, hence the number of wartime wrecks – which sort of makes potting one of the spoils of war. The chances of a large screw churning through the ropes are significant, and if individual pots are separated from their dahns, there is no way of telling where the pot lies.

Valkyrie II works 100 pots, roughly half of them on each of two weekly potting trips between trawling, with all of the pots left to soak for a week or so. It’s a two-handed job, not least because of the precision needed to put the pots close to – rather than on top of – the wrecks. The plotter has all the wrecks – and each part of each wreck – marked in detail, and as another chunk of wreckage is identified, it is added to the chart.

There is deck space for 15 or so pots to be stacked after emptying and rebaiting, but it’s the shooting which is the finer part of the science, Andrew positioning the boat at slow ahead while Johnny has a pot on the rail ready to go, and releasing it when Andrew shouts the word.

The bait is a bag of dabs, caught on trawling days, and of sufficiently resilient texture to stay reasonably intact for a few days under the attention of lobsters – even if what’s left is well on the nose by the time the pot is hauled. 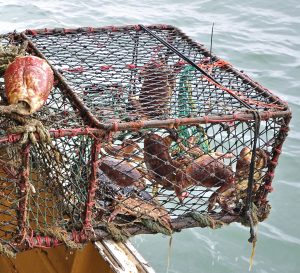 And this fishery is about lobsters more than crabs, although there are plenty of the latter about, and that particular day was fair to middling, with something approaching 40kg of lobster. Back at the quay, some would be going straight to local restaurants, and others into a storage cage sunk next to the quay.

But Valkyrie II and her 130hp Ford Mermaid engine don’t get as much work as they used to.

“Trawling gets a few roker, a few flounders and a few soles, but that’s only until about November, really, since the winter cod haven’t shown up. Potting is only good for the warmer months, June to September.”

Andrew makes the comparison with the start of his career. “One week, when I was trawling in the 1970s, we did 100 hours of non-stop fishing, two-handed, the two of us alternating, doing two hauls each, and getting sleep like that.”

This, in turn, raises the problem of industry recruitment, because with the lack of opportunity comes a lack of incentive for youngsters to come and learn.

“They’ve got no incentive,” says Johnny. “Since the bass were taken away – and that was our main earner – there isn’t the work, and now you can’t afford to take anyone on anyway, even if there was someone to take on. In this corner of the country, we didn’t have many options, and we now have one less with the bass gone. There are tonnes and tonnes of roker, but not always the quota, and then, when they did lift the quota a bit, the price fell on the floor and it wasn’t worth sending them to market. You were getting between 20p and 50p a kilo.” 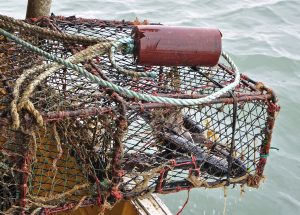 … although lobsters are the main target…

But talking about markets, the real survival trick for the small West Mersea fleet is in the marketing, and specifically Fresh Catch (Fishing News, 14 February), whereby fish is sold direct to the public from the quay twice a week, on Tuesday and Thursday afternoons.

In charge of that is Johnny’s wife Fran. She is the secretary of Mersea Fishermen’s Association, and when the members, looking around for survival strategies, began thinking in terms of working together to sell direct and cut a few people out of the chain, she realised that something like that would only work if someone organised it – and none of the fishermen had the time alongside catching the fish as well.

So she took it on. She does the advertising, paperwork and publicity, emailing nearly 200 customers on her list to say what they have available on each selling day, and posting on Facebook, where there are nearly 2,000 followers. She then helps to sell the fish, setting up stall on a trolley a few feet from the Mersea Fishermen’s Association’s cold box on the quay. She even designed the Fresh Catch logo.

Fresh Catch (email: fish@merseaislandfreshcatch.co.uk or telephone: 01206 385421/07791 628778) sells 80% of what the Mersea boats catch at the quay, the steady items including skate and sole and, in spring and autumn, a few bass – and lobsters and crabs in summer. 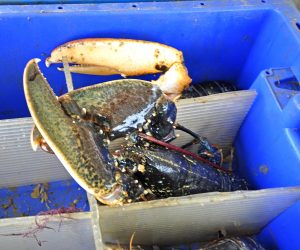 … which are kept separately until they are banded.

Somewhere in the mix there might be the occasional brill and turbot and, in autumn and winter, a few herrings, sprats and – increasingly rare – cod. One of the fishermen – perhaps Johnny, or Tim Cook – is on hand to clean or fillet, according to what each customer wants. Occasional surpluses go straight to Lowestoft market.

The unique selling point is fish straight from the fishermen and as fresh as it can be, along with a bit of banter. And word has spread, with turnover climbing steadily since they started over seven years ago, quadrupling over the past couple of years, with customers these days travelling in from as far as London and Norfolk.

And Andrew – who has seen first-hand the way things have gone over the past four or five decades – reckons it has saved the fleet. 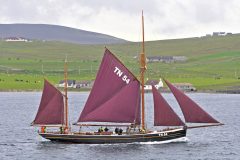 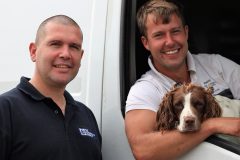