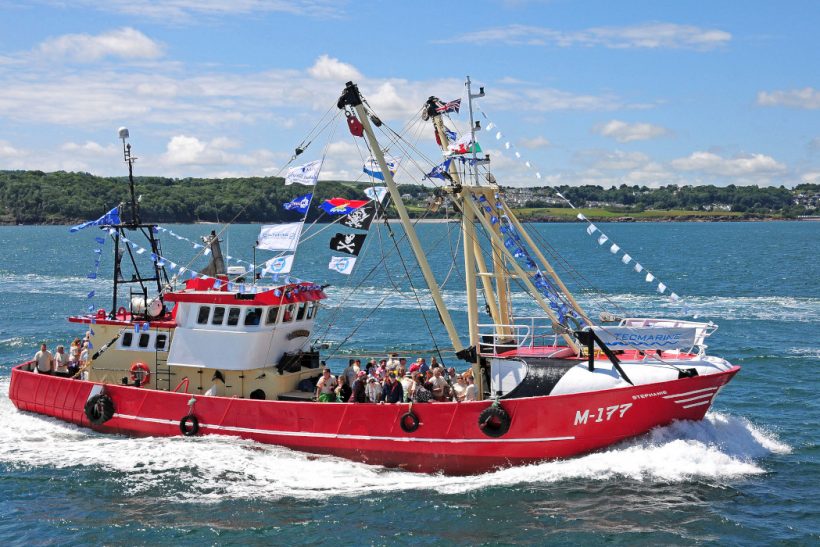 Brixham Trawler Race, the most famous and longest-established event of its type, took place on Saturday, 15 June, when the South Devon port hosted the 57th annual race.

A small window of good weather, in the ever-changing path of the unpredictable jet-stream responsible for Britain’s fickle summer weather, allowed a very welcome but unexpected sunny day, as early morning drizzle cleared away to be replaced by glorious sunshine, just in time for the 57th annual Brixham Trawler Race, traditionally held on the third Saturday in June. 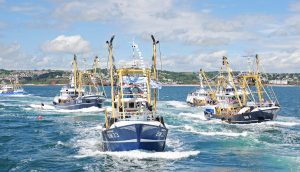 A cluster of beamers in close proximity round the Torquay marker buoy, as the faster boats start to catch their lower-powered counterparts.

Thirteen of Brixham’s modern beamer fleet were joined by the visiting 45m Hibernia WD 227, a Maaskant-built mussel dredger, built in 2005 at the Bruinisse shipyard for Irish owners Riverbank Mussels Ltd of Wexford.

The mussel dredger regularly returns to its builder for its summer refits and has, on several occasions, called in to Brixham on its return passage to participate in the trawler race.

Hibernia had steamed for around 30 hours from the Netherlands to take part in the race, and arrived in the early hours of Friday morning.

The Maaskant shipyard has very strong historic links with Brixham, being the builder of several of Brixham’s current beamer fleet, including the Waterdance-owned vessels, Angel Emiel BM 55, Catharina BM 111 and Margaret of Ladram E 198, as well as being involved with the development of the fleet, supplying both new and second-hand vessels to the port and carrying out refits in the Netherlands since the first Dutch-built beam trawlers arrived in Brixham in the mid-1960s.

The race began at 11.30am, when the first of the smaller day-boats and crabbers crossed the start line off Battery Gardens, just outside Brixham harbour, and followed the course around the coast of Torbay, passing Goodrington, Paignton and Torquay, before turning south near Thatcher Rock to head back towards Berry Head and the finish line off Brixham.

First to start the race were the tiny 6m crabbers Netty and Sophie Belle, followed by the under-10m day-boat trawler Dee J, and then the larger 15m day-boats Our David George, Harvester and Girl Debra, together with the scallopers Constant Friend and Golden Promise. 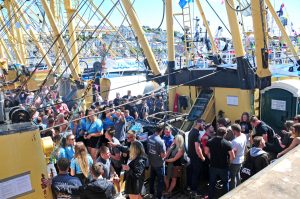 Post-race onboard parties and barbeques are an intrinsic part of trawler race day in Brixham.

Other bigger and more powerful boats followed at regular intervals, until the most powerful beamers crossed the start line, 10 or so minutes after the first boat.

A carefully calculated handicapping system, based on declared speeds, has the aim of ensuring that the slower boats, generally the 220kW Eurocutter class of vessel, have been caught up by faster, more powerful beamers by near the end of the race, creating the spectacle of the fleet of beamers powering towards Brixham breakwater at full speed – a thrilling finale, both for those aboard the boats and those viewing from the shore.

The movements of the boats, at the start of, during, and at the end of the race, are organised with military precision by the skippers, harbour master, trawler race committee and the MCA, prior to race day. Every boat has a berthing position allocated for when it returns to the harbour after the race, to ensure that everything runs as smoothly as possible.

Once safely moored up, the onboard parties and discos, which many consider the real event of the day, can begin. Loud music, sometimes emanating from professional DJs or live bands, and the smell of barbecued food fill the air, and the harbourside comes alive from early afternoon to late in the night – a far cry from its usual function as a busy fishing port and fishmarket.

Once the boats had all safely berthed and their parties were underway, a prizegiving ceremony took place on the quayside in the glorious sunshine, with Brixham-based Fisherman’s Mission area officer, superintendent Matt Skinner, presenting a well-established array of cups and trophies to the winners, in front of a sizeable crowd of skippers, fishermen and visitors. 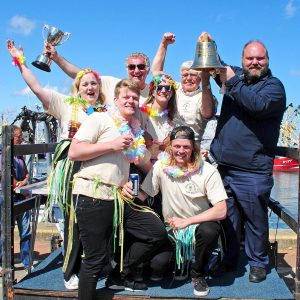 The crew of Stephanie celebrate winning the cup for first-placed beamer, and being the winner of the overall race, for which they were awarded the prestigious Maaskant Bell, being held by Mission superintendent Matt Skinner.

The winner of the keenly contested beamer class was the Milford Haven-registered Stephanie M 177, under the command of local skipper Dave Banks.

Stephanie was also awarded the prestigious Maaskant Bell as the overall winner of the race.

Paul Bird’s 10m steel Dee J BM 5, built in nearby Dartmouth in 1998, won the day-boat class, as well as the best-dressed day-boat award and first prize in the raffle – a large framed photo of a previous race, donated by local photographer Chris Slater.

The committee raises money through gate entry fees, the sale of programmes, coffee mornings, sponsorship, raffles, and collections aboard the boats, as well as other fundraising events. The 2018 race raised £20,000, which was distributed among local Brixham charities.

A legacy of long-serving committee chairperson Pam Evans, who stepped down after last year’s race, is that every primary school in the Brixham area now receives the sum of £500 from the money raised.

The new MD of Maaskant Shipyards, Eric Moerkerk, attended the race along with Henk Roukema, which bodes well for maintaining the close bond Brixham has established with the Netherlands. 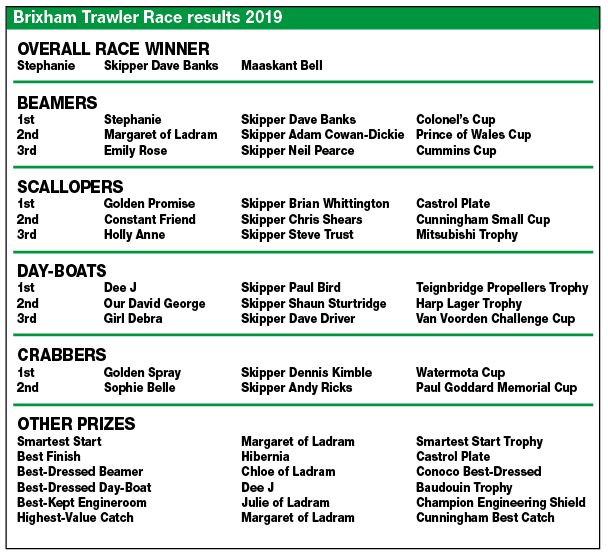 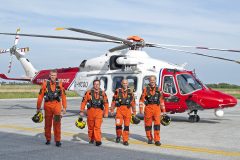