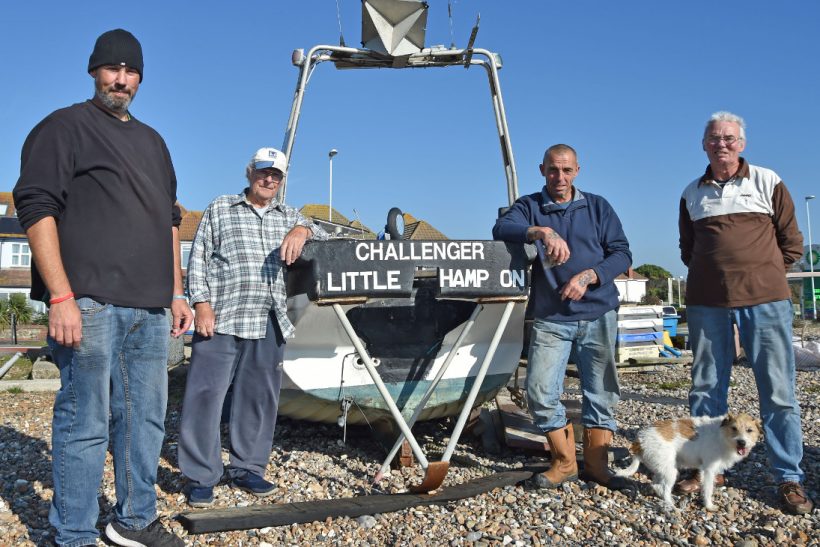 Worthing, in West Sussex, has seen a decline in the number of beach fishermen over the years – but not from want of trying, reports John Periam

Nick Jenkins currently has two boats, Susan Amanda and Challenger, working from the shingle beach at Lancing, just east of Worthing, where he sells his daily catch direct to the public from his hut on the beach.

“I was fishing at Worthing some 30 years ago, alongside Worthing pier. In those days there were about 15 boats,” he says. “I decided to return to it eight months ago, this time working from Lancing. It is in the blood, and my father used to fish. How many people can have an ‘office’ with the view I have got each day?” 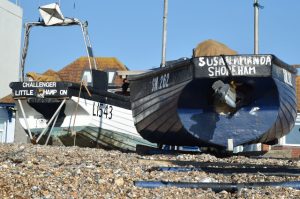 Nick Jenkins’ two boats, Challenger and Susan Amanda, together on the Lancing shingle beach, beside his lockers and winch cables.

The beach fishermen at Worthing are a highly committed group, and come from a close-knit community who all sell their fish to regular customers.

Lee Amphlett is about to start fishing. “I have bought my boat, and she is on the beach ready for her first day’s fishing – I haven’t got a name for her yet. It is going to be different, after many years in the building fabrication industry. I decided I wanted to take up the reins of my father-in-law Norman Bashford, who has been fishing from Worthing for 75 years, and still manages to get to sea sometimes at the age of 83. In life it’s nice to take up fresh challenges, and I can’t ask for a more qualified person to teach me the ropes than Norman.”

When Lee was 12, he used to help Norman and his friend Danny Belton on the beach. “Each boat had its own gear locker, and there was a winch nearby, and my grandfather was a fishmonger. Most of it has gone now, and there are only a few of us left. However, I want to support the heritage of the Worthing fishermen, and that is why I have decided to give it a go.”

The fishermen all sell direct from the beach, and this is their main source of income, as well as regularly supplying some restaurants and small hotels. Nick Jenkins was preparing some fish for a customer. “There is nothing like coming down to the beach and going home with fresh fish. I enjoy chatting to my regular customers and catching up with the local news. One must also remember that the mooring charges in some of the local towns have forced some fishermen to seek pastures new. Others have been moved away from their regular areas, often upriver and out of sight. 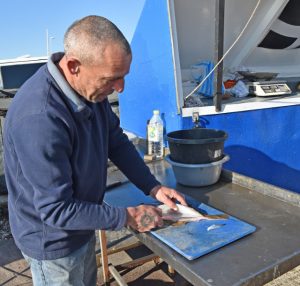 Nick Jenkins prepares fish for one of his regular customers. “Supplying fresh fish from the sea is what our business is all about.”

“It has happened at Littlehampton. I used to fish there, but the mooring fees were £1,200 per year for a 16ft boat. These prices are unreal and completely unaffordable. Gone are the days when fishermen were considered part of the coastal way of life. We are not treated like we used to be, and seem to be being put into hiding. I could not believe it when I heard that some of Littlehampton’s fishermen are using second-hand mobility scooters to get their fish from their now upriver moorings near a motorway bridge to the car park. It’s a disgrace!”

This was endorsed by the other fishermen. The pontoons have no fishing boats, and there are two large cabin cruisers rotting in the sun, giving tourists a totally wrong impression of a working fisherman’s way of life. It’s now all purpose-built properties, with moorings and cafés to suit.

Eighty-three-year-old Norman Bashford followed in the footsteps of his father and grandfather. 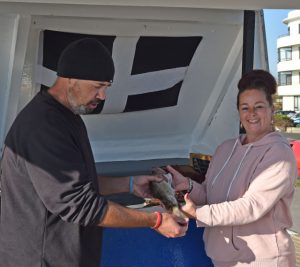 Lee Amphlett helps out by serving one of Nick’s customers – it’s a constant team effort.

“Once you get into fishing, you can’t – or rather, don’t want to – get out of it. I wake up every day looking forward to going to the beach. I don’t like going to sleep, as I want to get back down to the sea; I love it, and am so lucky. I meet people – which, sadly, others who use some of the larger ports don’t. They unload their catch and return to sea. As I prepare my day’s catch for a customer, we chat and put the world to rights.”

When asked, “How do you see the future for inshore fishermen?” Norman Bashford answered, “With the rules and regulations today, they are trying to put us out of business.

“We can only bring one bass in, no undulate skate, and so it goes on. I have fished in a sustainable way all my life, and don’t need to be told what to do.

“I do appreciate what the IFCAs and the MMO are doing. They are trying to protect us, and at times it is not easy for them. These fishery people are on the ball now, and illegal fishing is on the decline, which is good.”

Costs are what it is all about at the end of the day. Buying fish direct is cheaper and fresher than you can get in any supermarket.

Jim Phillips said: “It is not only about the quotas; people forget that weather plays an important part. Launching a small boat from a steep shingle beach is seldom easy. Retrieving boats can be even harder.

“You can come ashore having caught some nice fish, and then it rains and no customers turn up. It can be a struggle at times. Fish is a nice fresh product, but sales can be very patchy – there are good and bad days. I have supported Nick Jenkins in what he is doing, and I am proud of him – and he has now got a second boat. It is encouraging for us established fishermen to see this happen. 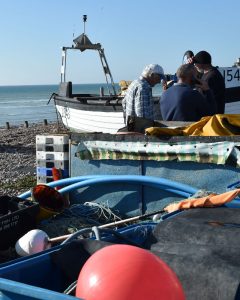 The beach is their ‘office’, says Nick Jenkins – they meet every day and anticipate the future with some apprehension.

“We don’t know what the future holds for us with Brexit. It is like a game of tennis – the ball keeps going from one side of the court to the other. We will see what happens, but we all have concerns for our future.

“In 2016, having got a lottery grant, the heritage project The Last Fisherman Standing was set up. The idea was to raise awareness of the history of Worthing’s fishermen and educate our children about the inshore fishermen. Our future is their future! And I admire the team’s work at Fisherman Standing.”

Fishermen at Worthing have experienced issues in the past with some of their gear being stolen from their beach lockers, and boats being damaged.

“We have limited protection,” said Norman Bashford. “It’s sad that some people get a lot of pleasure out of damaging people’s livelihoods. I know that Jim Phillips has some current legal issues relating to this. In some cases, we have resorted to removing nets to our own houses. Sadly, this appears to be a sign of the times.”

Driving around our coasts, one forgets about the dedication of the beach fishermen.

They try to sustain a way of living that is disappearing, and in doing so play an important part in retaining community life. The fishermen at Worthing should be proud of what they are doing. It was a delight to meet two men who have decided to return to fishing. It proves that there is still confidence in the survival of our UK fishing fleets, both small and large. 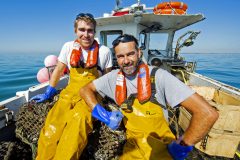 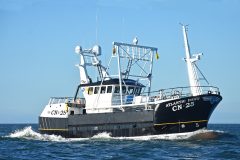