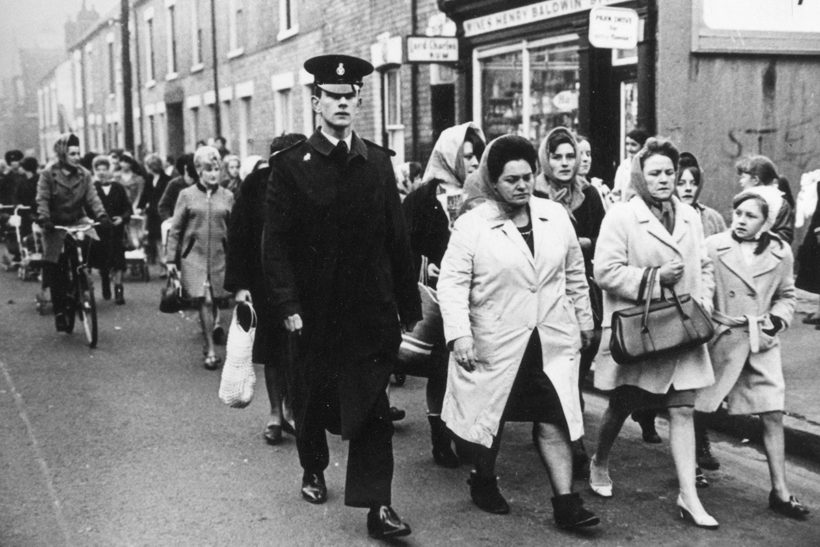 On 22 January, Hull’s Hessle Road celebrated one of its own when a plaque was unveiled at the former home of Lillian Bilocca, who led the successful campaign for better safety at sea after the 1968 Triple Trawler Disaster. Her biographer Brian W Lavery reports

The biting cold was a reminder of the harsh conditions faced by the men for whom she fought so hard all those years ago. 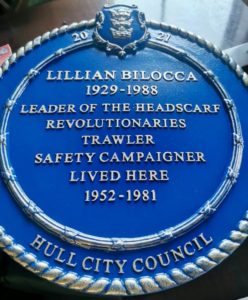 The heritage blue plaque for Lillian Bilocca, which was funded by the local community.

Also in the crowd was Mrs Bilocca’s only surviving sibling, her 85-year-old younger sister Minnie King – the widow of the late, locally renowned skipper Dicky King.

She said: “I think my sister would approve of this. It is good to see her being honoured in this way.”

It was placed on the front of her former home at 117, Coltman St, off the main Hessle Road.

Ernie Bilocca said: “I think it is humbling that my mam’s life is still being remembered all these years on.”

After the unveiling, the Lord Mayor said: “It is a wonderful tribute to Lillian Bilocca. I remember her well as I lived nearby as a child. This is a fitting commemoration of her life.”

The plaque was the brainchild of local community heritage activist Simon Peter Kelsey and Natalie Taylor of Lil’s Lasses – a women’s social history re-enactment group who don headscarves and attend heritage events in tribute to the women of Hessle Road.

The Lord Mayor took off her official civic hat and replaced it with a headscarf provided by the Lil’s Lasses group before the ceremony. Local MP Emma Hardy did the same. Both women joined the group for photographs, and were cheered by the crowd.

The West Hull and Hessle Labour MP said: “It’s very important that we remember the likes of Lil Bilocca, and also the memories of the 6,000 men who left this port never to return.” 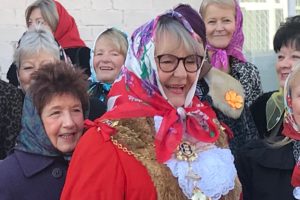 All plaques installed in the city have to be approved by the city council. Its Labour leader, Councillor Daren Hale, not only rushed the decision through, but also offered to match-fund the campaign – but in the event, it took a crowdfunding campaign just five days to raise the £700 costs.

Councillor Hale said: “What happens with blue plaques usually is that they are for rich white men, so it is important that working-class people have their role models recognised too.

“They are the real people who make history in cities like this.

“Simon Kelsey and his neighbours on Coltman Street decided it was high time that Lillian Bilocca had a plaque.

“The campaign took off very quickly. It was achieved in no time at all. We offered to match-fund, but there was no question really that the funding would be raised by the community.”

Councillor Hale also hinted that there may be tributes in the pipeline for the other women involved in the 1968 campaign – one of the most successful of its kind of the 20th century. 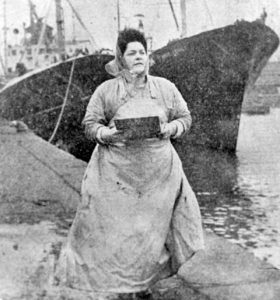 Lillian speaking at the docks, in her fish worker’s apron.

Another local heritage campaigner, Ian Cuthbert of the Headscarf Pride group, which is campaigning for a statue for the women, said: “It is a great day for Hessle Road. And great to see the work of the Headscarf Revolutionaries being recognised.”

Mr Kelsey added: “I have been involved in community action on Hessle Road for more than 10 years.

“I got a blue plaque on my own home here in Coltman Street, which once belonged to the trawler owner and city philanthropist Sir Christopher Pickering.

“Lillian Bilocca is probably the most famous name on Hessle Road, and she came back into public consciousness mainly because of the book that kick- started the rehabilitation of the reputation of Lil and the women who campaigned with her.

“It is now being taught in local schools.

“When I first moved here more than 10 years ago I wanted a plaque for Lil, but there was not the appetite for it then. Now with her story being told, the advent of City of Culture and interest in all things Hull, it seemed about time.

“So I got together with Nat Taylor and started a crowdfunder, and the money was raised in just five days.

“Also the support from the Lord Mayor and from Councillor Hale and the council was invaluable.

“It celebrates what can be done if you are from Hessle Road.”

Lillian Bilocca rose to international prominence after the Triple Trawler Disaster of 1968 when three Hull ships, the St Romanus, the Kingston Peridot and the Ross Cleveland, all sank within three weeks in the opening months of that year – still referred to in Hull as the ‘Dark Winter’.

She led a march on the trawler bosses’ dock offices, raised a 10,000-signature petition, and met with representatives of Harold Wilson’s Labour government to enact the women’s from the front pages. The world’s eyes were focused on Hull and its army of ‘headscarf revolutionaries’. 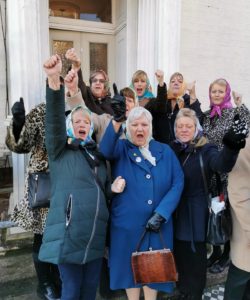 Returning from London, Mary Denness summed up the women’s fight by saying: “We achieved more in six days than the politicians and trade unions did in a century.”

Their 1968 campaign and the safety at sea laws that followed are reckoned to have saved countless lives.

One of those belongs to ex-trawlerman Jerry Thompson, chairman of the Hull Bullnose Heritage Group, who was there to watch Lillian Bilocca’s plaque being unveiled.

He said: “It is a great day for Hessle Road and a well-deserved tribute to Lillian Bilocca, whose campaigning helped save my life.

“As a 16-year-old in 1973, I was on the Hull trawler the Ian Fleming, and on Christmas night we ran aground off northern Norway. Fortunately, she campaigned for radio operators to be on every trawler, which there wasn’t in 1968, and for them to radio in twice a day, so everybody knew where they were.”

Mike Holiday, who now lives in Lillian Bilocca’s former home, said: “I have lived here since my dad bought the house and know the story. My son learned about the headscarf revolutionaries at school.”

Mr Holiday and his wife Emma bought a sketch of Lillian Bilocca, by local artist Paul Brecht, for £100 to help with the fundraiser. The portrait will now hang in their home.

The book referred to by Simon Peter Kelsey is The Headscarf Revolutionaries by Brian W Lavery (Barbican Press, 2015). The book’s title has now become shorthand for the Hessle Road Women’s Committee and their 1968 campaign. More information about the life and times of Lillian Bilocca is available at: brianwlavery.com 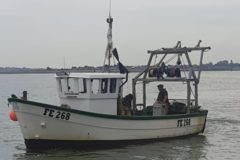 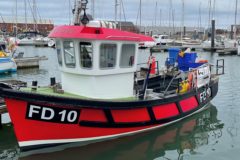