Details awaited but vessels look to be excluded

The UK government confirmed last week that it is providing £23m to support seafood exporters across the UK that have been hit by the red tape and paperwork that now surround exporting fish and seafood to the EU post-Brexit.

The money is also intended to support businesses that have been most adversely affected by the Covid pandemic, and the industry was awaiting full details of eligibility as Fishing News went to press. The government will be consulting the industry across the UK and working with the devolved administrations on the eligibility criteria before they are confirmed.

Money will be targeted at fishing export businesses that can evidence a genuine loss in exporting fish and shellfish to the EU. Support will be available immediately, and will be paid retrospectively to cover losses incurred since 1 January.

The scheme will be targeted at small and medium-sized enterprises, and the maximum claim available to individual operators will be £100,000.

The MMO will administer the scheme on behalf of exporters across the UK.

“This [support] is in recognition of the unique circumstances of the fishing sector, which has had the most significant new requirements to adjust to, and for whom even a short delay can lead to goods perishing – at a time when the industry is facing lower market prices and demand due to the pandemic,” said the government.

Environment secretary George Eustice said: “We are continuing to work closely with the fishing and aquaculture sectors to make sure that they are supported and can continue to fish whilst contributing to the economies of our coastal communities.”

Chief secretary to the treasury Steve Barclay said that the package ‘will help our hardworking fishing sector navigate the challenges of the next few months’. He added: “It is vital that no community or region within our United Kingdom is left behind as we continue to support British jobs and build back better from the coronavirus pandemic.”

The government said it will also provide further support to businesses in adapting to new export processes. DEFRA and HMRC will be offering ‘targeted, proactive and hands-on support to fisheries exporters to help them successfully meet the new requirements’. “This includes a new training package and focused workshop sessions,” it added.

The government acknowledged that seafood is a perishable product with a ‘just in time’ supply chain, so it is important that the sector can export quickly. It said it had been ‘working closely’ with the seafood industry and individual businesses to support them through the period, and to ensure that any errors or problems are tackled as early as possible.

“The situation has been improving over the last week and the flow of goods is improving, but we will do more,” said the government.

It added that the prime minister has also committed to providing a separate £100m fund to help modernise fishing vessels and the fish-processing industry, on top of the £32m that will replace EU funding this year.

Reaction to the announcement was that while the money was helpful, it was a ‘sticking plaster’ and ‘too little too late’, and that it would not help fishing vessels affected by the export delays.

Scottish fisheries secretary Fergus Ewing said that while more detail was ‘desperately needed’, it appeared ‘almost certain that the vast majority of fishing vessels who land but don’t export directly will not be covered by this scheme, which is beyond any rational explanation’.

He said: “The UK government must step up for all affected businesses. They simply cannot deny the impact that non-tariff barriers are having, following the UK government’s decision to leave both the single market and customs union of, by far, our largest market.

“They must ensure that their compensation package is open to all whose business has been interrupted or harmed by any aspect of the new export requirements – any attempt to apply conditions or boundaries will render the scheme meaningless and pointless.

“It must be said that as desperately needed as this compensation is for affected businesses, this is merely a sticking plaster for much wider issues, and not ‘teething problems’ as has previously been claimed.”

He repeated his call for the UK government ‘to immediately rectify their IT problems and seek a grace period with the EU’.

“It is very clear that the UK government should have extended the transition period as we called for, due to the pandemic and lack of progress in the negotiations,” said Fergus Ewing.

“I am pleased to see they have finally recognised our calls for compensation, but I remain concerned this may be too little, too late for some businesses that have been left to rot as a result of the extensive bureaucracy forced on them by a poor Brexit deal and failing UK IT systems.”

He added that it was ‘unacceptable’ that the UK government did not consult the Scottish government on the funding package.

Seafood Scotland welcomed the announcement, but said the industry still needed a ‘grace period’ to ensure the system was ‘fit for purpose’.

Chief executive Donna Fordyce said: “After almost three weeks of voicing their concerns and frustrations, we welcome the fact that the Scottish seafood sector has been heard and action is being taken.

“While we await the full detail of the package, we know that there will be questions around the extent to which it supports the entire supply chain, from fleet to export.

“As we currently understand it, the deal offers crucial short-term assistance and includes much to be welcomed, particularly the £23m of new funding.”

She said it was also reassuring that the processing sector is set to be included in future support packages.

“This will offer a ray of light to some small and medium-sized companies that have experienced crippling losses over the past few weeks. However, larger companies and smaller shellfish boats are still vulnerable, and will be hoping that they can access support too.

“Money will offer a much-needed sticking plaster covering the losses over the last few weeks, but to completely staunch the wound, the sector still needs a period of grace during which the systems must be overhauled so they are fit for purpose.”

It was also essential that groupage urgently returns to a fully operational state, she said.

“Tonight’s announcement is certainly a step in the right direction, and we will continue to work with industry, partners and government to ensure the sector gets the proactive support it so desperately needs,” said Donna Fordyce.

Orkney and Shetland MP Alistair Carmichael said the scheme was ‘the bare minimum’ the government could do. He noted concerns about the lack of detail on the measures, amid fears that the government would limit claims and seek to invalidate many applications for support.

He said: “The money is welcome, but no one should be in any doubt that this is an admission of failure by the government. Compensation is the bare minimum seafood exporters should expect after the shambles they created with Boris Johnson’s weak deal with the EU.”

He said that businesses will want to know the eligibility criteria for claims. Some companies had told him they fear the barrier to compensation will be set so high as to make it impossible to claim.

“It is especially troubling to see that there is already a cap on claims for individual operators of £100,000. One business in my constituency lost half that on a single consignment, so the government needs to be realistic about these losses and how they can be made good,” he said.

Exporters were already buried in red tape and ‘the government should not add to that pile’.

“It is far from clear that we are over the worst for fish exporters. Once that is sorted, the government must explain to fishermen how they intend to make up for the broken promises that they made to the industry,” said Mr Carmichael.

The EU’s ambassador to the UK Joao Vale de Almeida has described the problems being faced by British seafood producers exporting to the EU as inevitable consequences of the UK’s decisions around its exit from the EU.

Speaking at an event on the future of UK-EU relations on 19 January hosted by the Bright Blue think tank, Joao Vale de Almeida said that he hoped exporters would adapt to the new arrangements, but that extra checks were inevitable now that the UK was out of the single market and the customs union.

He said: “I like to say that decisions have consequences, in the sense that the choice made by the United Kingdom – to leave the European Union first and then to leave the single market and the customs union, the sort of Brexit that you voted for – has consequences.

“One of them is that there have to be checks and controls at our borders, there is no way out of that.

“We hope that things will improve in the coming weeks, but don’t forget that things have fundamentally changed.” 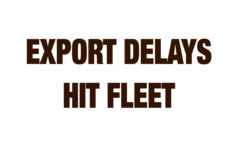 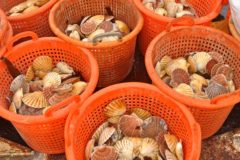