Linkage of access and trade issue spelled out on Marr show

A senior cabinet minister refused to confirm that there will be fewer foreign vessels in UK waters after Brexit, reports Tim Oliver

He also failed to answer an allegation that the current Brexit deal negotiated by Boris Johnson is no different from Theresa May’s deal, and inevitably links fisheries negotiations to the overall trade deal.

The BBC’s Andrew Marr said that EU negotiator Phil Hogan had said that a free trade agreement could be reached by the end of 2020, but that the UK would have to agree to ‘a level playing field’ on regulations.

He asked foreign secretary Dominic Raab on his Sunday morning TV programme whether he would commit to a level playing field.

When he dodged the question, Andrew Marr said he suspected the free trade deal would be ‘a lengthier and more difficult process than the government is saying’. He continued: “Let’s take fishing. After you’ve done a deal on fishing, which you want to finish by July next year, are foreign trawlers going to get good access to British waters or not?”

The foreign secretary refused to commit to saying there would be fewer foreign boats despite being asked three times, saying only that it would be subject to negotiation, with the UK in control as an independent coastal state.

Andrew Marr pointed out that the political declaration with the EU says: “Within the context of the overall economic partnership, the parties should establish a new fisheries agreement on access to waters and quota shares.” “That’s a very specific linking of the two things,” he told the foreign secretary.

He said that when Boris Johnson first saw those words in the political declaration negotiated by Theresa May – the same as in the deal he had negotiated – ‘he flipped his lid and resigned’.

Boris Johnson’s comment, shown on screen, was: “Theresa May’s deal hands the EU infinite power to bully and blackmail this country to get whatever it wants in the future negotiations. And if history teaches us anything, it is that our European friends will not desist until they have worked out a way to plunder the waters of Scotland for their fish.”

Dominic Raab again said only that the UK would be in control during bilateral negotiations as an independent coastal state. Andrew Marr said that the two political declarations were ‘word for word the same’.

Asked if we would leave without a deal at the end of the year if the government could not get the deal it wants on fishing, Dominic Raab said only that ‘as with any negotiation, of course there’s going to be compromise on both sides’. He said he believed there was an opportunity for ‘a win-win here, a deal which is great for the UK which is also good for our European friends. That’s what we’re aiming for’.

Andrew Marr told the foreign secretary: “We’re sitting here in the middle of the election campaign, and in lots of marginal constituencies and coastal seats up and down the country, fishermen and their families are looking very, very carefully, and they are hearing you saying there is going to be compromise.”

He asked again if we would leave without a deal if there was no deal on fishing, but Dominic Raab said that he could not break down in advance ‘the hypothetical negotiation stance’.

“The guarantee I can give is that we’re going to be an independent coastal state with full control, and we’ll do what is in the best interests of fishermen and women up and down the country.”

He did not think it ‘remotely likely’ we would leave without a deal.

The UK industry and government position is that access to fisheries for European vessels to British waters, and vice versa, must be treated separately from the overall trading relationship. This is spelled out in the UK white paper of 2018.

EU fishermen say that they wanted the link between trade and fisheries from the start.

“That was really important to us,” Gerard van Balsfoort, chairman of the European Fisheries Alliance (EUFA), told the Irish national broadcaster RTE.

“This is the starting position. There will be a direct link to the wider economic and trade partnership. We wanted this from the start in the mandate, and also in the text of the political declaration. The whole linkage of the wider partnership and fisheries is still there.”

A linkage between trade and fisheries access puts the UK in a difficult position because of the risk to all food and drink exports to the EU, and particularly shellfish, if there is no deal and there are therefore restrictions on exports, and delays at the border.

RTE quoted an EU official saying: “The rhetoric on fisheries has been toned down. There’s a realisation it’s a hell of a lot more complicated. The shellfish sector has raised their voice in the past six months, saying that with no deal, they would be wiped out overnight. Especially in the west of Scotland, the small island communities – all the exports go to France. It’s time-contingent, it has to get there in 24 hours.”

Gerard van Balsfoort said: “The UK intention will be to use the access to waters to get a higher share of the quota. What quota exactly, we don’t know.”

Sean O’Donoghue, chief executive of the Killybegs Fishermen’s Organisation, told RTE that every EU head of government was ‘fully aware’ of the importance of the linkage between access and trade. Ireland is particularly exposed to any restrictions on access to UK waters. Of the 50 species that Irish vessels target, 47 are shared with British fleets.

“Overall, we need 30% access for all the different species,” said Sean O’Donoghue. “But that belies the fact that two of our main economic drivers are mackerel and prawn. We need 60-70% access for mackerel and 40% for prawns.”

He said: “If the foundation stone isn’t laid at the beginning in the trade talks, and the access and percentage sharing arrangements aren’t agreed and written into the deal, then we’re on a hiding to nothing. If the arrangement has to be rolled over annually, the UK could say at the outset, that’s fine, but they’d wait two or three years and say, we’re not agreeing with that any more.”

An Irish official said: “The UK think they’re going to be sold down the river. Our guys think the same. One of them is going to be right.” 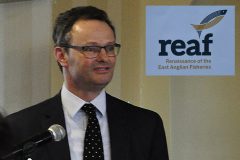 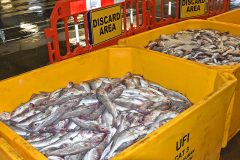