But it has a severe downside in that it appears to link access rights of EU vessels to trade negotiations – something the industry is adamantly against – and commits the UK to remain in a customs union with the EU for at least the transition period, and possibly for much longer.

Industry leaders warned that there was still much hard negotiating ahead. Several ministers, including Brexit secretary Dominic Raab, have resigned over the deal, and with opposition from both within and outside of her party, prime minister Theresa May faces an uphill struggle to get her deal through parliament.

SFF chief executive Bertie Armstrong said that unless all of the prime minister’s commitments to the fishing industry were fulfilled, ‘no deal’ would be ‘a more attractive option’ than the agreed deal.

The NFFO said that in the next stage of talks, UK negotiators will need to be ‘tough, astute and hard-nosed’ to secure the benefits of Brexit.

NUTFA said the situation ‘is a farce of epic proportions’ and that businesses were ‘desperate for some clarity’.

The wording in the document, that a new fisheries agreement will take place ‘within the context of the overall economic partnership’, suggests that fisheries access will be linked to trade arrangements (see below: Key wording on fisheries).

EU chief negotiator Michel Barnier made it clear that this is the EU position at a press conference in Brussels after the deal was agreed. He said that Theresa May would have to agree to grant EU fishing vessels access to UK waters in return for tariff-free single market access.

This was earlier confirmed in comments made by Michel Barnier’s deputy, Sabine Weyand, in a leaked briefing note of a meeting she held with European ambassadors. She wrote that Britain ‘would have to swallow a link between access to products and fisheries in future agreements’.

The briefing underlines fears among Brexiteers that the temporary customs union during the ‘backstop’ will become the long-term basis for the relationship with the EU, prohibiting new trade deals and forcing the government to adopt all new EU rules and regulations, regardless of whether they are in Britain’s interests.

The UK industry’s fears that fisheries and trade will be linked in the future negotiations appeared to be confirmed by a statement from the Killybegs Fishermen’s Organisation in Ireland, which welcomed the Brexit agreement (see below left).

Industry leaders warned that the deal left the door open to trade and fisheries being linked, and the industry in a state of uncertainty.

SFF chief executive Bertie Armstrong said any link between trade and access was ‘simply unacceptable’. He said the federation welcomed the intervention of the secretary of state for Scotland, David Mundell, and his fellow Scottish MPs, stating that they could not support anything less than ‘full and effective sovereignty over UK fishing waters’.

“We have been saying for two years that the only plausible way forward for the industry is for the UK to become an independent coastal state with the power to determine who catches what, where and when in our waters. It was this sovereignty that was so cruelly stripped from this country when we joined the EEC in 1973, betraying generations of fishermen and denying them the right to a fair living.

“There can be no link between access to our waters for EU vessels and the trade of seafood products in the EU – it contravenes all international norms and practice, and is simply unacceptable in principle,” he said.

“The prime minister has made a series of commitments to the industry, and anything less than the fulfilment of those means that the Sea of Opportunity will not be realised, and makes ‘no deal’ a more attractive option.”

The NFFO said it would be ‘hard to overestimate the seismic significance’ of the shift to the UK becoming a legally independent coastal state.

But it said that the explicit reference to future fisheries negotiations taking place within the context of the overall economic partnership ‘signals that this is where the EU will seek to maintain its negotiating leverage, albeit with a much-weakened hand to play’.

“The UK’s legal status has altered, and its leverage in fisheries negotiations has dramatically changed, but unless that new status is used to address the gross distortions in quota shares, fishermen will question what it has all been for,” said NFFO chief executive Barrie Deas.

“To deliver the fair share of fishing opportunities that they rightly see as theirs, British fishermen, in this second round, will expect our negotiators to be as tough, astute and hard-nosed as they need to be to realise the benefits of our new status as an independent coastal state.”

Jerry Percy of NUTFA said: “To arrive at this stage of the negotiations, still unclear not just as to whether we will have a deal, no deal, or no Brexit, but in fact whether we will still have a government to govern, is a farce of epic proportions.

“For fisheries, just as much confusion reigns as at any time in recent months. The withdrawal agreement appears to run counter to the apparent certainty from Europe that access to our waters is inextricably linked to any trade deal. The sum total of all this is that we are still in a state of flux, with any number of fishing businesses, along with businesses more generally, simply desperate for some clarity.

“We have arguably the richest fishing grounds in Europe. No deal would mean we instantly regain them, but will struggle to sell into our biggest market – especially the hundreds of businesses trading in live shellfish – while a deal will undoubtedly result in a trade-off between market access – and other non-fishing demands – and continued access for EU vessels. A second referendum would likely retain the status quo. You really couldn’t make it up.”

Good deal for Ireland and EUFA

The UK industry’s fear that the Brexit deal is a bad one was underlined by a statement from the Killybegs Fishermen’s Organisation in Ireland, a member of the European Fisheries Alliance (EUFA), which welcomed the deal.

KFO chief executive Seán O’Donoghue said that the draft documents were ‘a positive first step’, and meant that Irish fishing ‘is well placed to avoid a disastrous hard Brexit’.

He said the draft documents ‘reflect the key concerns articulated by the Irish fishing industry in the course of the marathon 29-month negotiations’.

“Having fisheries referenced specifically in the draft withdrawal agreement – and maintaining the link to the wider trade sector in the political declaration – is a key ask from our perspective.”

He said the draft agreement was ‘a significant first step’ in defining relations with the UK, and that ‘strong foundations’ had been laid.

But he warned, “We know only too well from experience that fisheries negotiations are multi-faceted and highly complex, and much remains to be agreed.

“We firmly believe that the future framework for fisheries, after the transition period, needs to maintain the current levels of reciprocal access to waters and markets, as well as sound science-based fisheries management. The text on the table takes the first steps to deliver on this, and we look forward to productive negotiations in the near future.”

The KFO said Ireland’s two biggest fisheries, mackerel (60%) and Nephrops (40%) are hugely dependent on access to UK waters, with overall dependency for all stocks of over 30%.

“Maintaining reciprocal access to waters and resources needs to be at the heart of the post-Brexit relationship in fisheries, given the historic ties and inextricable links between our countries and industries.”

Seán O’Donoghue acknowledged ‘the effectiveness of the united approach taken by EUFA’.

More on EUFA Santiago Declaration below.

FFL: ‘Deal is a stinker’

Campaign group Fishing for Leave (FFL) said the deal was ‘a stinker’ and meant ‘yet more capitulation’ to the EU.

It said that the damaging comments by Michel Barnier’s deputy would put ‘huge pressure’ on Scottish and coastal MPs to vote against the deal.

“We are apoplectic at this deal, but feel fully vindicated,” said FFL.

“As we have forewarned for 12 months, re-obeying all EU law in a transition, followed by becoming a vassal state under Mrs May’s Chequers deal, would not be temporary but lead to being bound to the EU in perpetuity.

“Mrs May has conceded to continued regulatory alignment, disguised in the fluffy language of a ‘level playing field’.

“But as Mr Barnier’s deputy has confirmed, this will be used as the basis of the ongoing future relationship, and access to products and fisheries will be linked – meaning continuation of Britain’s obedience to the CFP.”

FFL also argued that the deal will undermine the integrity of the UK, and give fresh impetus for a second referendum.

“This is a woeful, abject betrayal of Britain’s struggling fishing and coastal communities, along with every promise,” said FFL.

“Scottish Conservatives, and all other MPs, must now come out loud and clear and say that ‘no deal is better than a bad deal’, and that they will stand up for Britain and Brexit to save Britain – including our fishing.

“Those who have the guts to do so will have the support and gratitude of Brexiteers and the country for generations to come.”

As Brexit negotiations reach a decisive stage, fishermen from the EU’s main fishing member states have re-emphasised that any Brexit deal must include reciprocal access to fishing grounds and markets, reports Tim Oliver.

One year ago, nine EU countries with fishing interests in northern EU waters came together in Santiago de Compostela to take a common stand and urge decision-makers to protect the economic future of their communities, who fish in what will become UK waters, during the Brexit negotiations.

Representatives of the EU countries – Denmark, Sweden, the Netherlands, Germany, Belgium, France, Spain, Portugal and Ireland – formed the European Fisheries Alliance (EUFA), and have marked the first anniversary of the ‘Santiago Declaration’.

EUFA claims to represent 18,000 fishermen, 3,500 vessels and 13 fishermen’s organisations from these countries. The declaration was signed by dozens of coastal communities that will potentially be affected by Brexit. They demanded that vital fishing interests be defended during the Brexit negotiations, as the future of these fishing communities is dependent on the outcome.

EUFA sees reciprocal access to fishing grounds and markets with the UK as its priority. It states that post-Brexit, co-operation on sustainable management is necessary, to ensure the economic livelihoods of fishing communities, and the future of the fisheries sector in Europe.

It said that fisheries are important because the UK and EU share limited resources, as well as interdependent ecosystems.

EUFA chairman Gerard van Balsfoort said the fisheries industry is about people and the livelihood of fishing communities.

He said: “Over the past year, the European fisheries industry has stood united in order to represent these interests, and to ensure that negotiators in Brussels and London are well aware of the tangible consequences that Brexit could have on the vulnerable situation of coastal communities.

“Our message to policy-makers remains unchanged – namely, that any Brexit agreement needs to take care of our coastal communities. A long-term economic future means safeguarding current reciprocal access arrangements to waters and markets, and maintaining current distribution of fishing opportunities.”

Rosa María Quintana Carballo, fisheries minister in Galicia, Spain, said: “Our vibrant coastal communities have depended on the fisheries industry for centuries. Their world revolves around their fleets.

“In Galicia, like in so many other European coastal communities, fisheries and fishermen are core to our local cultures, our folklore and our shared identities. We are celebrating the Santiago Declaration because it addresses coastal communities’ concerns, and seeks to ensure that EU decision-makers are well aware when negotiating the withdrawal agreement, as well as the future relationship with the UK.” 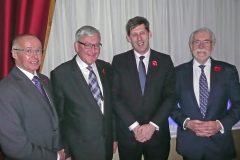 SFF annual dinner – opportunities must be seized and challenges overcome 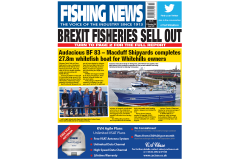