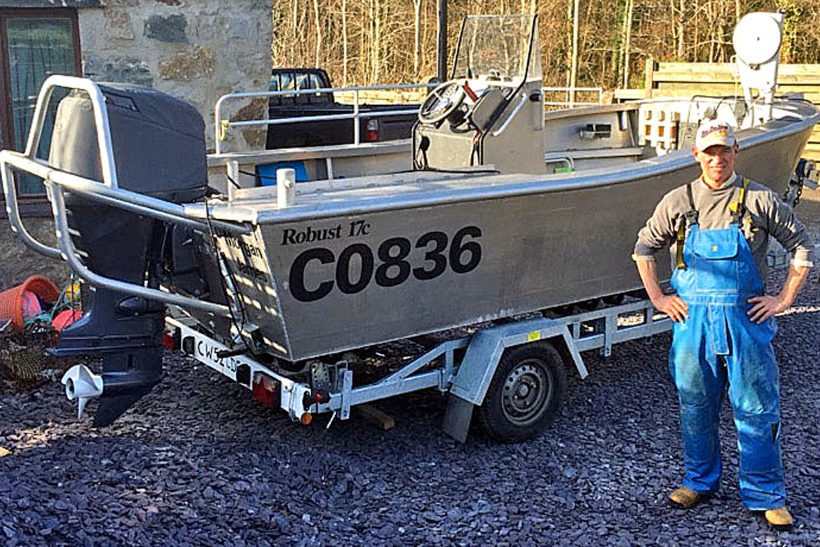 A North Wales fisherman is calling on UK inshore bass fishermen to form a group to fight the new ‘ridiculous and discriminatory’ 2017 bass regulations imposed after the December Council, and possibly mount a legal challenge, reports Phil Lockley.

Above: Skipper Andrew Owen with his new boat which under the new regulations, stating that bass entitlement is attached to a boat rather than a licence, means he will not be able to fish for bass with a new boat designed to give enhanced safety.

Inshore skipper Andrew Owen of Caernarvon told Fishing News: “You might as well call the rules a ‘bass stop’. I’m of a mind to look at some sort of legal challenge – there must be a way of getting fishermen like me together and stopping this dreadful rule coming into force.”

The draconian new rules mean only fishermen with a track record of catching bass in 2015-2016 can catch bass in 2017. Track records must be attached to boats, not licences as normal, and cannot be transferred from one boat to another.

Skipper Owen has just invested £36,000 into a new line-fishing boat and trailer – a package aimed solely at nomadic bass fishing –and now fears his boat may now be of little use.

He said, “I have bought a Robust 17c (Morgan James CO 836) from Robust Boats near Haverford West in South Wales. I bought it as a bass boat that I can take to wherever the fish are. It’s a serious investment, aimed to provide a major future income for my family. In an area like North Wales, with huge unemployment and substantial poverty, what other chances do I have? None.

“I have focused on commercial bass fishing for the past 40 years, and have bought a new boat to upgrade to a safer boat. For anyone here, buying a boat is a huge investment. My life is bass fishing – what right has the EU and/or the MMO got to take that livelihood away from me?”

He said bass is the only real line-fishery possible in his area – fishermen are either lobster or bass fishermen – there are not enough mackerel to make handling a serious business.

They do not catch small bass – he said almost every fish weighs well over four pounds and the few smaller fish caught are safely returned to the sea. “This is a prime area for big bass, it always has been; we don’t have discards.”

Skipper Owen queried whether the rules apply to other bass fishermen, such as gill netters, and in the rest of the EU. “As far as I know it’s the whole of the EU, but one thing is certain – it will have a huge knock-on effect here in the UK. I know boat builders are already losing orders – will they be asking the government for compensation?

“After a referendum vote to leave the EU, why should we be touching our forelock to the EU on issues that will have a long-term damaging effect on the future of the British bass fishery? Hundreds of UK bass fishermen will now suffer from what is a retrospective rule.”

Andrew Owen said that changing bass track records from licences to boats was ‘a very dangerous move’, adding that ‘wherever there are bass fishermen there are some very old boats’. A trend towards investing in new and safer boats has now stopped and bass fishermen can no longer consider buying a new boat. “Old boats can be dangerous, so who will take the blame when an old boat sinks?” he asked.

Skipper Owen read a report on the new bass regulations in Fishing News (9 February, ‘Track record bombshell’), before he had received any official explanation in writing from the MMO or DEFRA. “I couldn’t believe it when I read it in Fishing News,” he said.

“Yes, some skippers had seen the new bass rules on the MMO website, but is Fishing News the only way that bass fishermen would receive notice on paper of the final rules? Surely the authorities should have told us first, and only implemented the rules after serious consultation with the industry. I understand that at present there is no appeals process.”

Andrew Owen said he had taken legal advice and had been told there might be ways to claim compensation.

“The solicitor said it might be that the authorities cannot legally stop a business they have formerly lawfully allowed. Would the MMO have issued my fishing licence, knowing that I am a 100% bass fisherman, while at the same time being aware that having no track record within the cut-off period would prevent me from bass fishing? I don’t have any other fishery to turn to. Surely any judge would throw the new bass rules out of court if those prevent me from earning a living?

“I took delivery of my boat last August. I received the vessel’s registry document by the middle of September and my fishing licence on 4 October, just four days after the cut-off date for the new rules. I was ready to fish the following day and I did fish, successfully too. I had no idea of the bass ban until I read Fishing News.

“I am outraged by this whole thing. Bass line-fishing has been my business for many years; and it’s not just my business, fishing for bass to me is a passion, but it’s has now been taken away from me.”

been cancelled as fishermen have become aware of the new rules that mean new boats with no track record cannot fish for bass.

Steve Rees, owner of Robust Boats near Haverfordwest, told Fishing News: “As soon as the fishermen heard about the new rules, I had four potential orders immediately withdrawn. I have no doubt other yards will be in the same situation. The four cancelled orders were from successful skippers, most being existing customers of ours.”

He said the damage to boat builders caused by the new regulation will be irreparable if it is not withdrawn. “Preventing the building of newer and safer boats doesn’t conserve bass,” he said.

“One skipper who cancelled his order is from North Wales, like Andrew (Owen). He already has a 17ft Robust Boat (Robust 17c) and wanted a 19ft version, the Robust 19c. He wanted the boat to be ready for later this year, so he won’t be coming back – he can’t buy a new boat and keep bass fishing.

“I had a potential sale for a 9m catamaran that we have recently developed for static-gear fishing that has fallen through, and another potential order for Devon that has gone.

“It’s just shocking the way that the EU and the MMO are imposing these rules, out of the blue with no consultation or warning at all. With the track record attached to the boat, what happens if the boat sinks or is damaged beyond repair? How can the skipper buy a new boat – is he made to give up his job?

“Or once the skipper knows that his boat is too old and has little safe-life ahead of it, what does he do? Does he stick with that boat and risk being injured or, even worse, lost at sea? Who is responsible then?

“This has put people like Andrew (Owen) in a very difficult situation. The whole thing is wrong – fishermen will lose their livelihoods.”

Steve Rees said he had exhibited at Skipper Expo at Bournemouth and had been considering taking Robust Boats to the Skipper Expo in Aberdeen, but had put that on hold.

“It’s not just Robust Boats that is being affected – lots of other yards must be suffering too. It all has a big knock-on effect.” 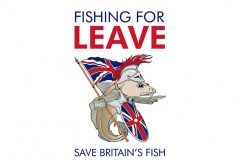 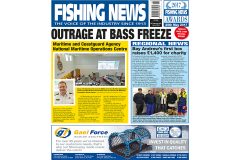