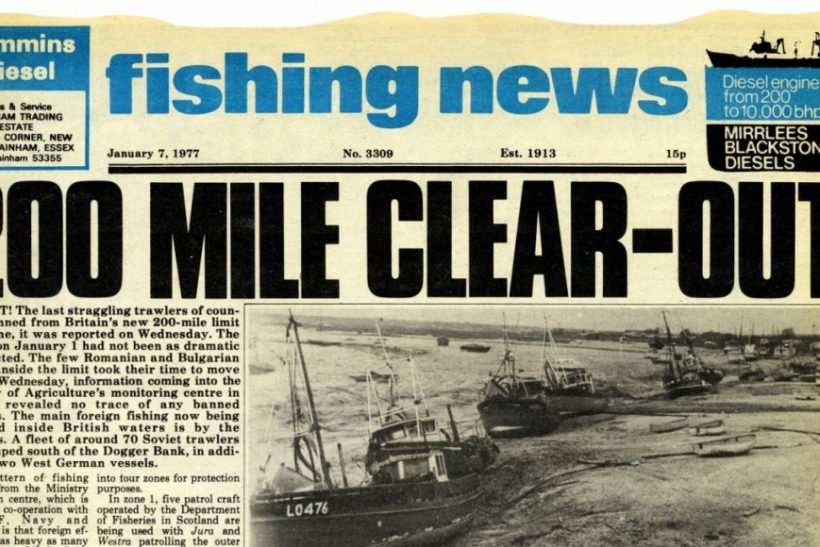 Commercial fishing: Looking back to 1977

Still being printed in black-and-white, with a small amount of blue added to the cover, what Fishing News lacked in colour, it made up for in content. Politically, 1977 was a challenging year for the industry and Fishing News was working hard to support it.

Merseyside was a hot-bed of activity in this year; some good and some not so good. Red Rum won his third Grand National, Liverpool won the league and the European Cup, while an IRA bomb factory was discovered in the city. 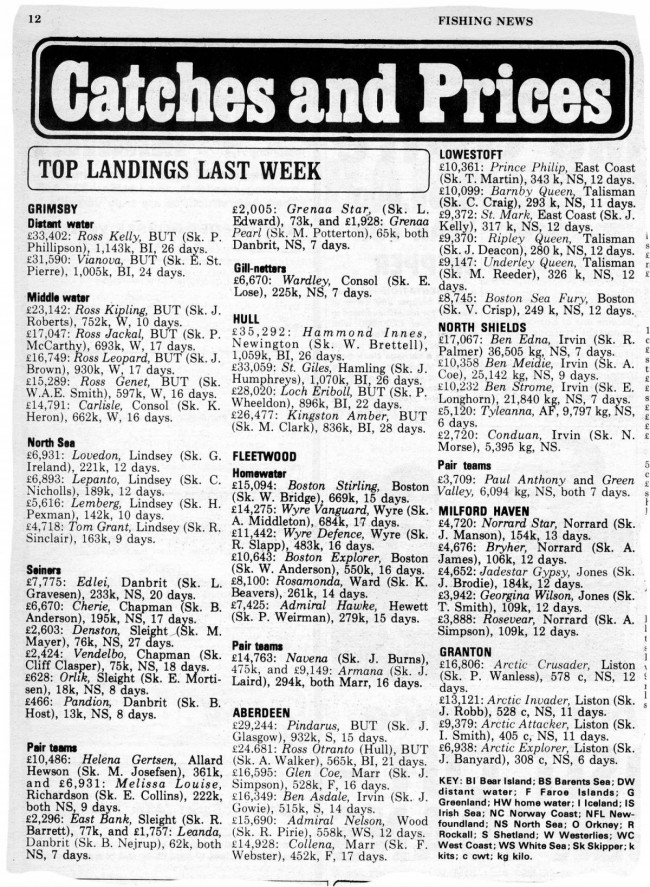 British Leyland threatened to sack 40,000 striking toolmakers and Prime Minister James Callaghan weighed-in by saying that if they didn’t go back to work, the government would no longer subsidise the ailing carmaker.

The Queen’s Silver Jubilee saw street parties and celebrations at every level throughout the country and the Commonwealth.

Groucho Marx checked out, after having ‘I want a second opinion’ carved on his gravestone and Freddie Laker’s Skytrain was flying folk to New York for £59. 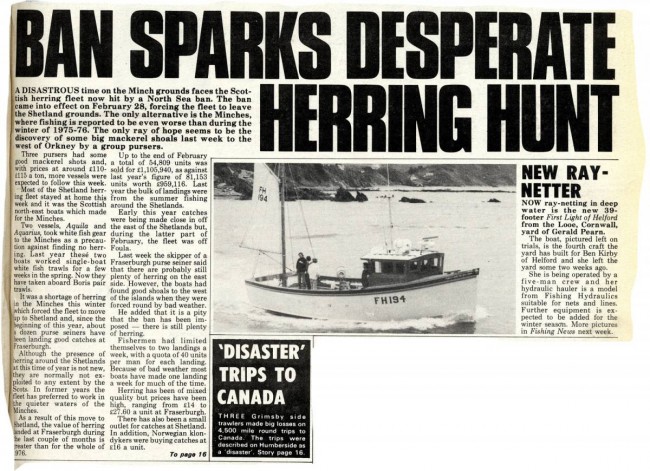 Manchester United manager Tommy Doherty won the FA Cup and then was promptly fired for having an affair with the physio’s wife. Star Wars was released, Elvis played his last gig and, to the chorus of many a joke, the rings of Uranus were discovered.

Computer manufacturer Apple was started and pop star Marc Bolan had the fatal misfortune to wrap his Mini around a tree in Putney, London. The final stretch of the M5 to Exeter opened, Fleetwood Mac released the soon-to-be ubiquitous Rumours album, while the nemesis of progressive rock, the Sex Pistols, got sacked by EMI and then released Never Mind The Bollocks on Virgin Records.

Spain had its first democratic elections after 41 years of dictatorship under General Franco, the Yorkshire Ripper claimed another victim in Bradford, Mike Leigh’s Abigail’s Party debuted at the Hampstead Theatre and Charlie Chaplin exited stage left at 88. 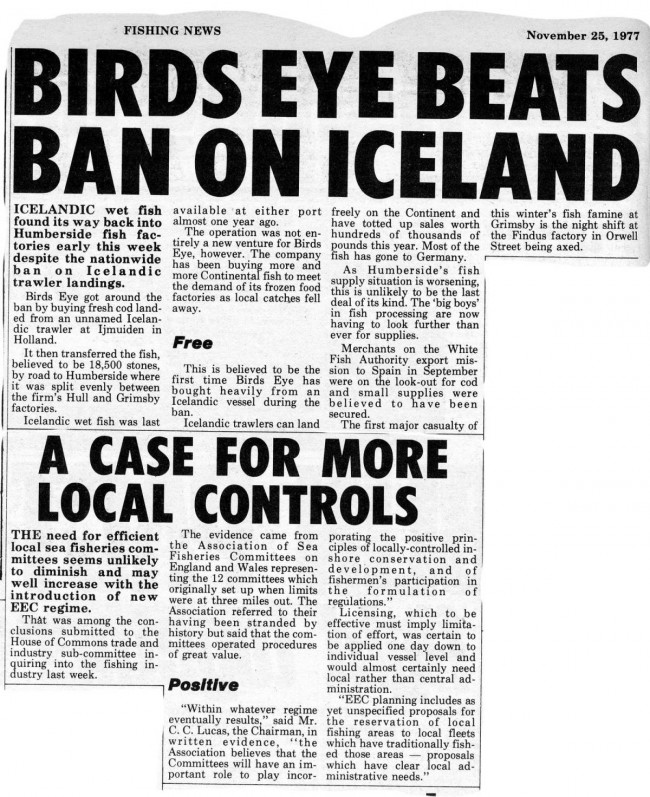 1977 started with the introduction of Britain’s new 200- mile limit, with the sea area divided into four zones for protection purposes. The Royal Navy was largely responsible for the northern and southern zones in the North Sea and the South-West approaches, while the Department of Fisheries in Scotland deployed five fisheries patrol vessels, with the larger Westra and Jura monitoring the outer limits. Russia refused to recognise new conditions imposed on the Soviet fleet operating in EEC waters.

Following the collapse of the EEC-Icelandic talks, Humberside County Council appealed to Prime Minster James Callaghan to provide aid for an area where up to 10,000 sea and shore jobs might be lost. 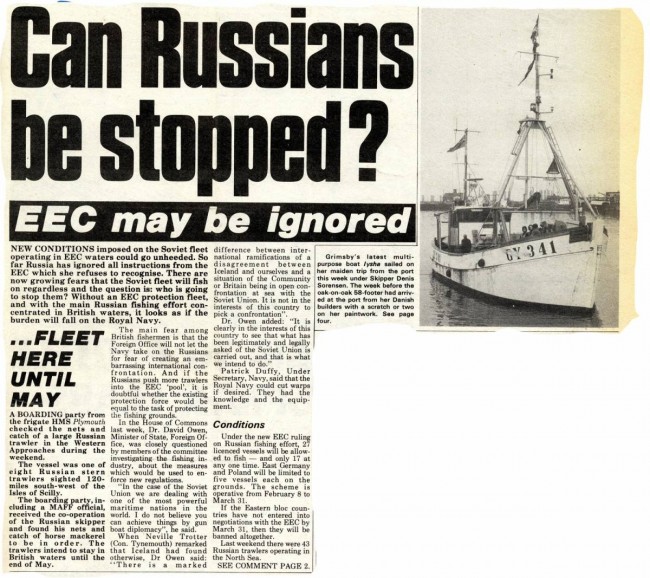 A ban on herring fishing in the North Sea was implemented on 28 February, even though skippers were reporting plenty of herring west of Shetland. Midwater boats displaced from the Shetland grounds moved to The Minches, only to find very poor fishing there.

In July, women dressed in traditional Fife fishergirl clothing and carrying placards in support of the industry’s claim for a 50-mile exclusion zone around Britain, headed a protest march by 700 fishermen from all parts of Scotland through the centre of Aberdeen. Speaking at the meeting, EEC Fisheries Commissioner Finn Gundelach reiterated the message he gave at Hull six weeks earlier: no 50-mile exclusion zone. 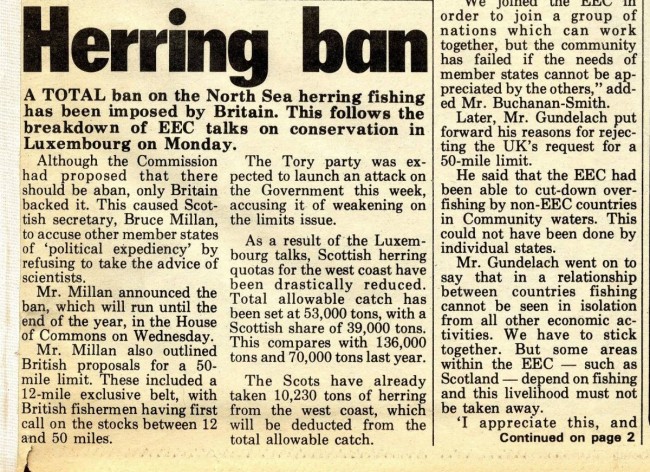 In the same week, during a House of Commons debate of fisheries called by the opposition, John Silkin, the Minister of Agriculture and Fisheries said: “Let nobody here or abroad get the impression that because we are reasonable we are prepared to surrender the needs and rights of our fishermen. Renegotiation of the CFP would be long and difficult. But while we understand the problems of others, they must be prepared to understand ours. If they do not, the result will be to harden, not soften, our resolve.” 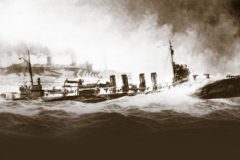