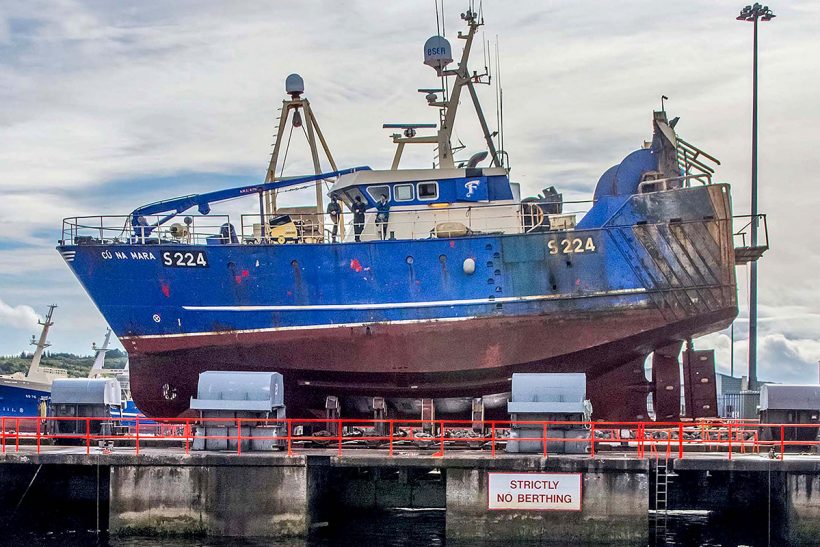 Above: Cu Na Mara is lifted out of the water at Killybegs…

After Cu Na Mara was taken up on the syncrolift to be fully power-washed and cleaned, Mooney Boats’ engineers began the extensive refit.

One of the first jobs was fitting a new transducer supplied by Jonathan Kennedy of Marine Fleet, in a new housing fabricated by Mooney Boats.

The vessel’s fish hold was stripped out, and the freezer store made bigger by moving the bulkhead forward. The fish lockers and wet fish room were also modified, to give more storage space for future catches. Once all the structural work and sheeting was completed, the fishhold was completely re-fibreglassed by the yard.

At Michael Flannery’s request, KER Group carried out a complete overhaul of Cu Na Mara’s refrigeration systems. In the blast room, the whole system was fully decommissioned. The existing compressor was removed and replaced with a new one, while the evaporator was removed and serviced, and new heaters installed. Existing shelving was removed and upgraded using new shelving supplied by KER to utilise space and increase capacity. Further refurbishment work in the blast room included new flooring, side walls and deck head. The freezing system was completely re-piped and re-wired. 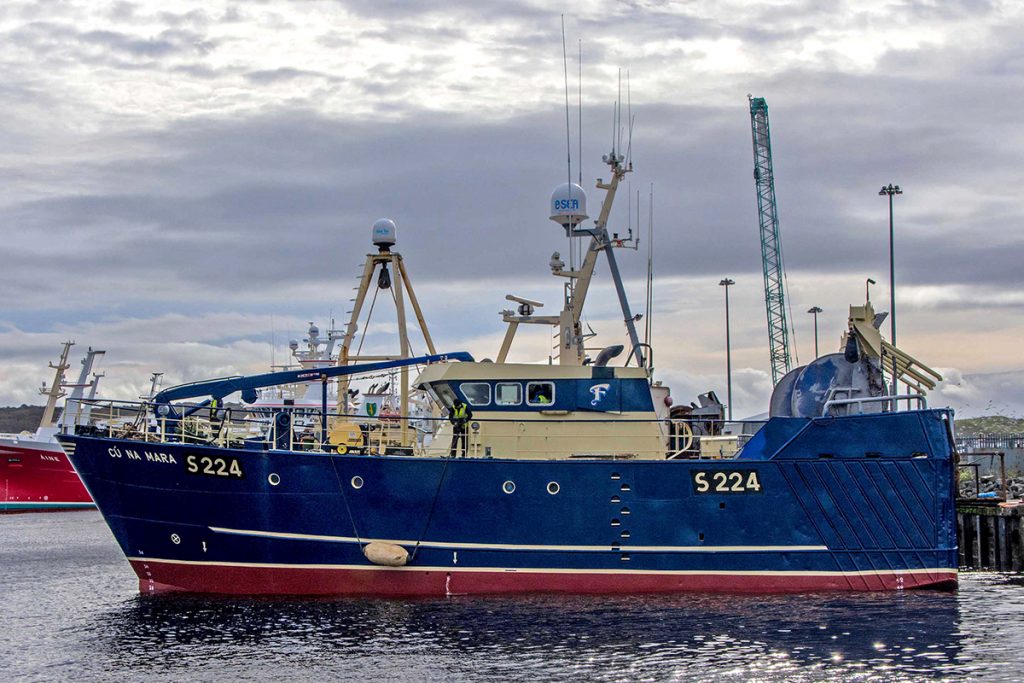 …and afloat again on completion of an extensive refit.

Similar renewal work was carried out in the vessel’s freezer and fish rooms, including installing man-in-hold and gas alarms.

In addition to these works, KER also installed a modern unit for logging temperatures, including a stab probe for the blast room.

On deck, the guide-on gear for the two split trawl winches aft was removed and taken to EK Marine, which made new guide-on gear and bushings.

Mooney Boats’ engineers also modified the stern of the vessel; this involved cutting down the top bulwark rails. Four new stern rollers were then manufactured in Mooney Boats’ machine shop. Two were fitted on the main deck, and the other two were fitted above them; one set of rollers is for the nets going out below the bulwarks, and the other set is for the nets coming in over the top of the bulwarks.

Underneath the shelterdeck was also completely stripped out and high-pressure water blasted, by Mooney Boats.

The fish hopper, which is situated on the vessel’s starboard side, was also modified. The hopper’s old base was removed, and a new aluminium base was installed.

Mooney Boats supplied a new Thistle Lift MKB13 power block crane from Thistle Marine of Peterhead and fitted it on top of the gantry.

There were numerous other works carried out on the vessel, including pipework, carpentry and electrical work during its six-week visit to the boatyard. Once all works were completed, Glen Campbell Painting treated the whole vessel internally and externally, before Cu Na Mara was returned to the water.

Mooney Boats Ltd continues to be extremely busy, with numerous other boats from all parts of Ireland, including St Catherine Laboure, Foyle Warrior, Fragrant Cloud, Nausicaa, Coronia Gloria, Margaret Mary, and Shaun Conneely’s recent acquisition, Achieve, making use of the facilities and services in Killybegs. 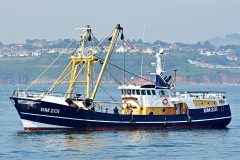 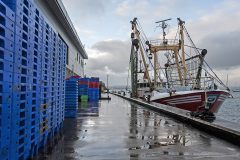