Launch planned in 2019, but not in Scotland

The MMO is about to start consulting on the introduction of electronic catch recording for the UK under-10m fleet, reports Tim Oliver

It will affect all UK fisheries administrations and crown dependencies (Channel Isles and Isle of Man), but will not apply in Scotland.

The MMO says that with the help of fishermen at ports across the UK, it has developed an app that can be used on a smartphone, tablet or computer to record catches.

Michael Coyle, MMO head of compliance and control, said: “We have been testing the prototype with users, and we will continue to do so as we develop the service. The app is designed to be quick and easy to use, as we want to minimise additional work for fishermen to comply with licence conditions.

“The indications are that it takes just 90 seconds to record a single-species catch via the new app.

“Our aim is to support the viability of the fishing businesses by making fishing sustainable long-term. To do that, we need to better understand the full impact of fishing on stocks.

“Introducing a requirement for under-10m vessels – the majority of the fleet – to record their catch, both quota and non-quota, would give us a much clearer picture of how much fish we are taking from our seas. It would also enable us to act more fairly and efficiently to conserve stocks at levels that support sustainable fisheries in the future.”

A consultation is about to start so the MMO can better understand how catch-recording will affect the under-10s, with a view to launching the change in 2019.

Answering criticism that small fishing businesses already have enough to do without introducing even more reporting, Michael Coyle said, “We understand how hard fishermen and people in the industry work. Our aim is not to introduce more reporting for its own sake, but to support our plan to develop a sustainable fishing industry for the future.

“The new recording arrangements will reduce the paper burden on fishermen. The existing process will be replaced and there will be just one recording requirement, which can be done very quickly via a smartphone.”

DEFRA is already consulting on the introduction of vessel monitoring (iVMS) for the English inshore (under-12m) fleet, and plans a phased roll-out between April 2019 and June 2021. Scotland will introduce iVMS for the under-12s in 2020 (Fishing News, 18 October, ‘VMS for under-12m fleet’).

Michael Coyle said that combined with data from iVMS, the catch-recording information can be used to trial new ways of managing fishing opportunities. This should:

The MMO says that fishermen and the industry are gearing up for a period of major change during the coming year, including Brexit, the discards ban, and new digital services from the MMO.

The consultation is expected to start early in January 2019.

Commenting on the MMO proposals, New Under Ten Fishermen’s Association (NUTFA) leader Jerry Percy said there was no doubt that electronic vessel monitoring and catch reporting were coming for thousands of the UK’s under-10s.

“The MMO has not suggested any length cut-off point, to date, for smaller vessels, so all we can hope for is that it has a genuine consultation, listens to working fishermen, and recognises and reacts to the practical difficulties involved,” he told Fishing News.

“As ever, the devil will be in the detail, and the proposals already throw up many more questions than answers – not least, just why do small-scale guys need to record and report their catch before it leaves the boat? And just how are they supposed to gauge the weight of catch without scales, when the current system of supplying sales notes within 24 hours provides more accurate information?”

He said the MMO app promotion video makes reporting via smartphone look easy, using only three species – whereas the reality for many under-10s can be very different.

“Many will catch a variety of around 30 species, using a variety of gears and differing soak times, so the reporting process will take a great deal longer than the suggested few minutes.”

Referring to the linked plan to introduce VMS monitoring for the under-12m fleet (Fishing News, 18 October), Jerry Percy said one of the big issues for smaller boats is powering the iVMS kit.

“The MMO’s requirement for ‘type approval’ precludes the use of solar-powered equipment, despite its clear benefits for many under-10s. Past experience also illustrates the problems in getting kit fixed – and without a working iVMS, you will not be allowed to put to sea.

“Try explaining that to a small-scale fisherman who has to wait a week for a service engineer, when no type-approved supplier currently has a network of qualified engineers that can cover the entire country and guarantee a same-day service.”

He said that NUTFA and the Coastal PO – which have particular expertise in this field – will be ensuring that the voice of the under-10s, and common sense, prevail in the consultation process, and subsequently.

“UK officials are apparently confident that they are not envisaging any problems in the roll-out of iVMS to 2,380 vessels. What could possibly go wrong with a large-scale governmental computerised system… ?”

Fishing News will include a fuller consideration of electronic reporting and iVMS for small-scale vessels by Jerry Percy shortly. 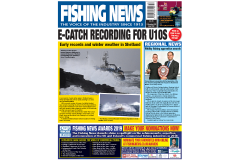